In the runup to the long-awaited Disgaea 6, we look at the latest re-release of Disgaea 4 to see if it still holds up nine years after its initial PS3 release.

Until recent years, the SRPG genre has remained a relatively niche market. Though big hitters have come and gone, be it Final Fantasy Tactics, Shining Force, or Advance Wars, each had their following, but none quite became the mainstay they had hoped. With the advent of games like Fire Emblem Awakening and XCOM: Enemy Unknown, the genre exploded with new life and love, but no title can quite hold a candle to the absurd brilliance of the Disgaea series. With this definitive edition of the definitive edition of the fourth entry available on PC and modern consoles, I hope to give you a glimpse of what makes this series so great. 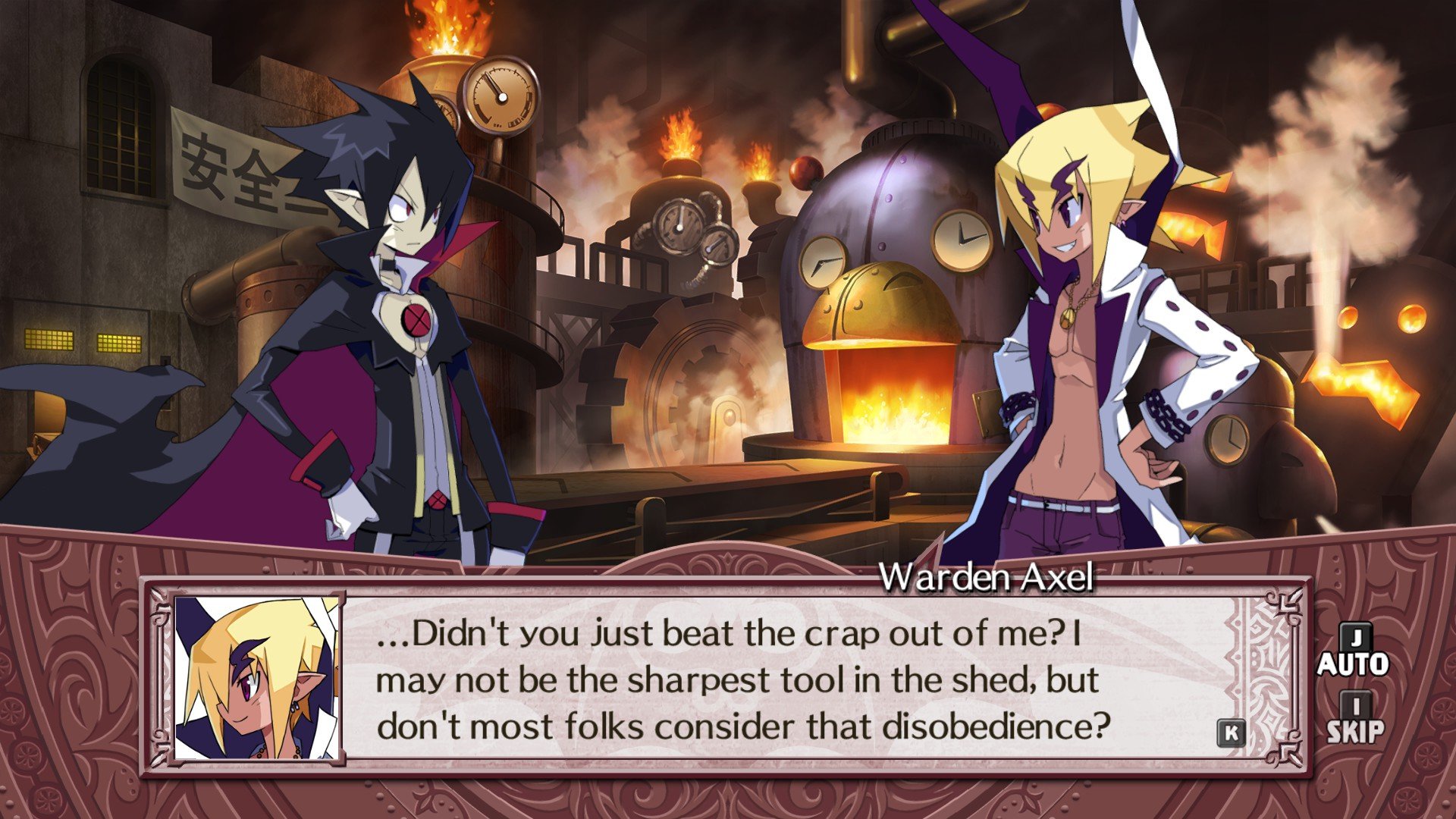 The game opens in Hades where you meet our protagonist Valvatorez, a vampire sworn to never again taste human blood. Once a powerful tyrant, he now has the generally-undesirable job of Prinny Instructor, doomed to eternally mould the souls of sinful humans into the obedient doods you all know and love. I’ll waste little time trying to explain the plot, because frankly it goes off the rails fast. The Corrupternment decides that Prinny overpopulation has become a real issue in the Netherworld, and decides the mass-extermination of our patchwork penguins is the only option. One thing leads to another, and suddenly our main man is on a warpath against the very Corrupternment he once worked for. If the plots of this series are one thing, they are consistent. They’re unpredictable, they’re devilishly funny, and they’re also fully voice acted. Listening to the characters as they frame a prison warden for their own crimes, or discuss sardines as a substitute for human blood, it elevates the whole thing. The series as a whole is one of few I find myself skipping very little of the voiced dialogue. It’s just too good; I crave more.

Looking to the gameplay, any SRPG fans will feel right at home. It’s familiar in all the right ways. As standard, you have an isometric view akin to Final Fantasy Tactics, where a turn can be broken down into moving your characters, performing an action, and watching them be executed. It’s worth saying here though that a top-down view more closely similar to the Fire Emblem series is also available. I did notice a few minor texture layering issues using this mode, and it’s more difficult to visualise height, but I’m grateful it’s there all the same. Isometry was the biggest reason I struggled to get into the series initially, my mind just doesn’t play well with it. Back to the gameplay though, there are a number of actions available to you in a turn to provide a surprising level of depth to play. Sure you can attack and use skills, but then you also have things like Magichange–the ability to turn your monster allies into weapons for your human allies. This is interesting because the weapon’s effectiveness is based on the monster’s stats. The stronger the monster, the stronger the weapon. And just like that you find yourself wanting to train another character. You can also merge two of the same monster type to create a giant monster and again you find yourself wanting to train more characters, wanting to try new things. As a series, it incentivises grinding and experimentation in a way I simply haven’t come across elsewhere, and the games are designed to accommodate this. 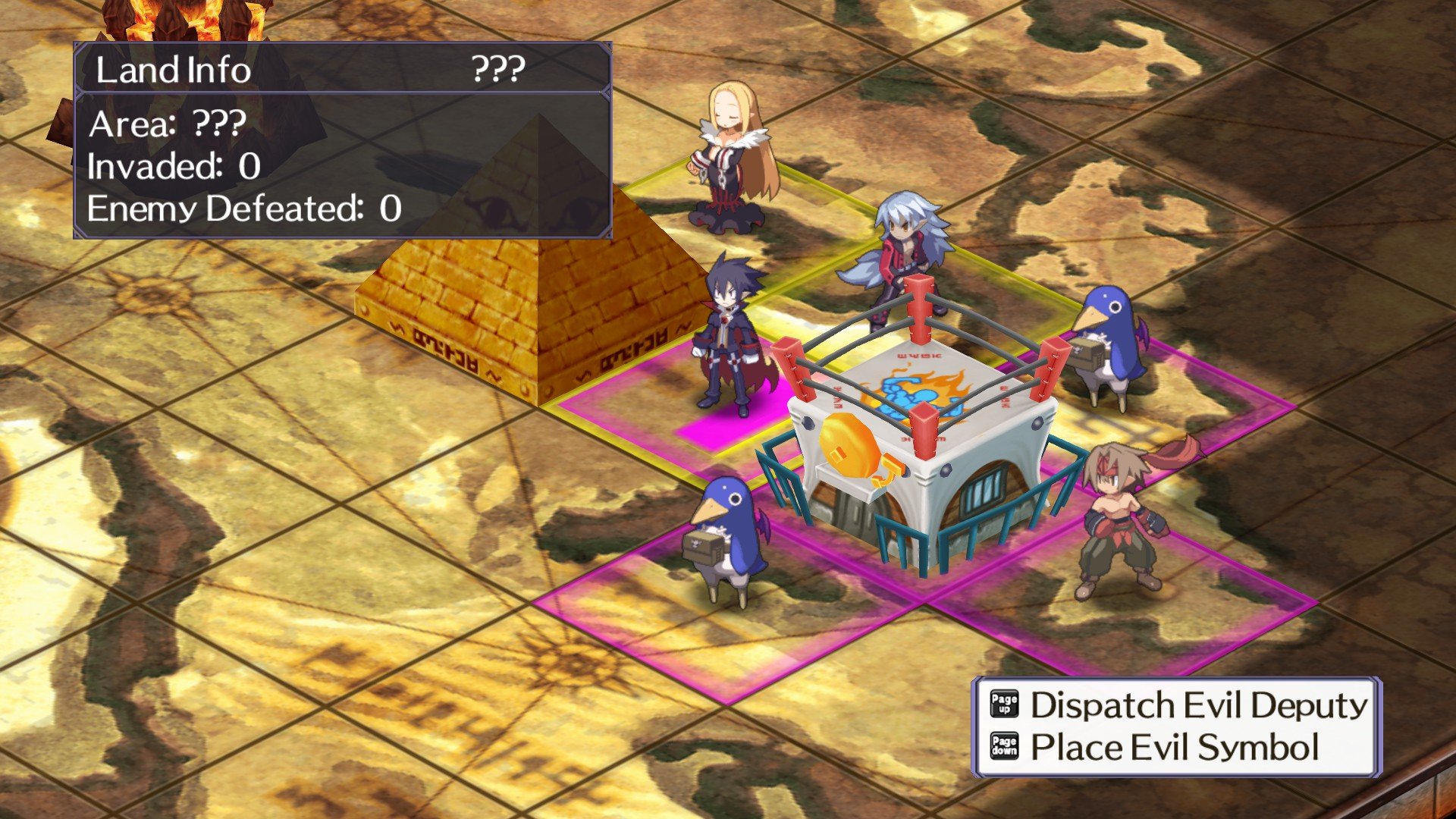 Of course, much of my praise is praise for the larger series, so what does Disgaea 4 have to offer for itself? In all honesty, there’s not that much. The most significant feature you’ll only find here is Cam-Pain HQ. Since Valvatorez is taking on the Corrupternment, it makes sense he’d have his own campaign to win the masses. In reality, this is a large map that houses all the characters in your party. As you complete more maps in the story, you unlock more tiles here that can be occupied by more party members. What’s more, you can use this space to place Evil Symbols if you find yourself not at capacity for allies. Evil Symbols provide a good variety of boosts and advantages to you, some only working for characters within their proximity, while others providing a set effect. You can see my setup below for the first two Evil Symbols you acquire. These two allow for a fraction of EXP and Mana gained by the leader, in this case, Valvatorez for both, to be distributed to the other members within the vicinity. Some characters also have Evilities that are provide bonuses based on their position in Cam-Pain HQ, such as providing a bonus to stats based on how many allies are adjacent to the appropriate ally. 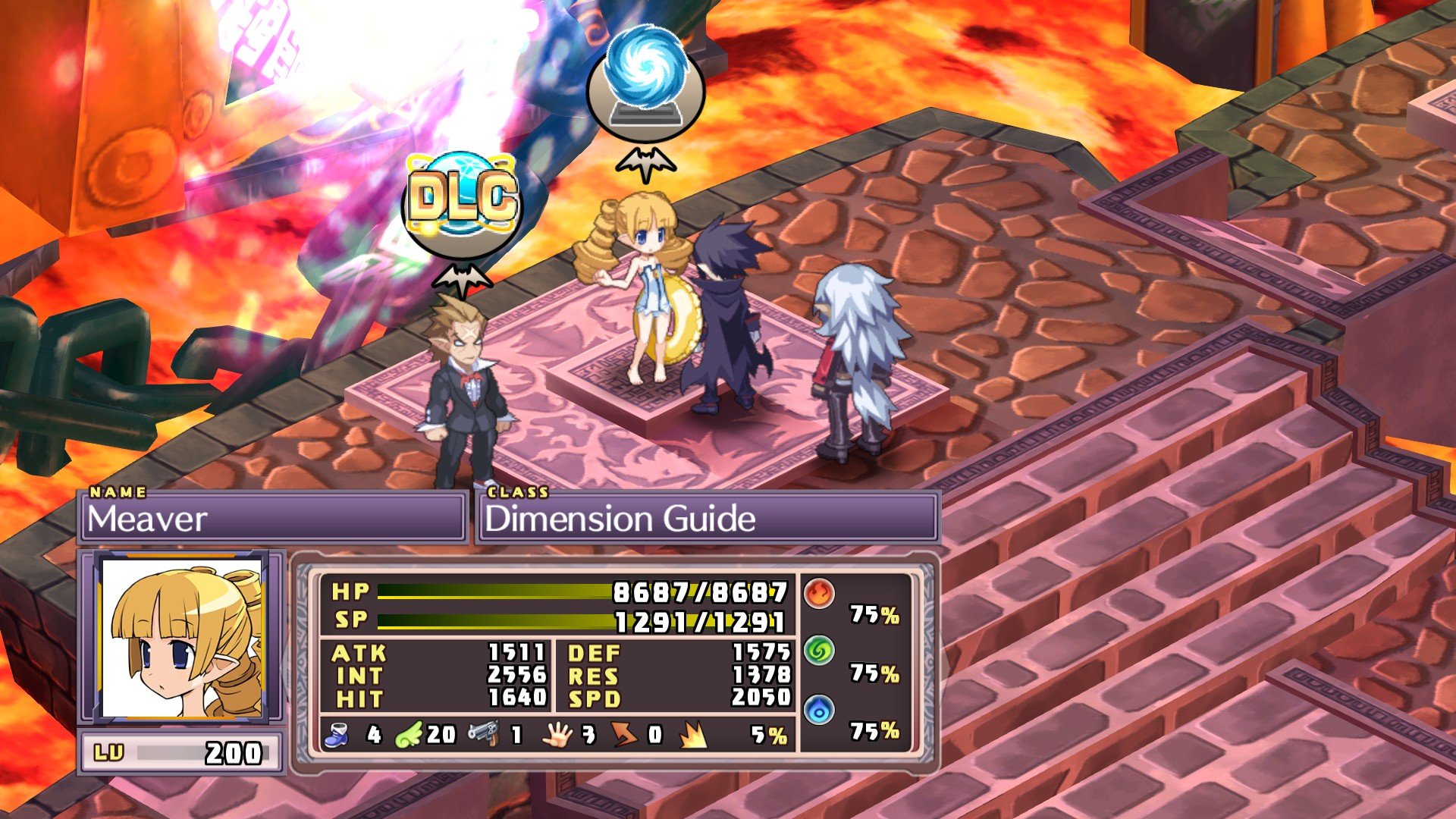 Watch out for the shady "DLC" guy.

There is one more thing that, at least to the best of my knowledge, is unique to Disgaea 4–or to be more specific, Disgaea 4 Complete+. I am of course talking about the new “DLC”. For small portions of real-world money, you can minimise the grind with EXP boosters, and various other handy tools. That’s right folks, microtransactions! Honestly, it goes beyond the usual response of corporate greed. I’m just left asking why? Who is this for? The game is well-paced where you don’t need to grind unless you enjoy it, and is designed in a way as to make it accessible and simple if you do. Heck, it’s a game that has a cheat shop as a feature. A cheat shop where you can readily increase your yield of EXP, Mana, or money. On top of this, you can scale enemy difficulty to get as high levelled as early on as you want. I understand EXP boosters in games designed around a certain task taking a certain amount of time, MMOs that lock levels behind hours of grinding to keep people in their ecosystem. Disgaea 4 by comparison, is a game where you can hit max level many times in an hour by the point in the game where it actually matters. It’s really not the microtransactions in themselves that annoy me, it’s the choice of game they decided to put them in. It doesn’t make sense to me, and would even go as far as to say it diminishes the satisfaction that comes from defeating the game’s hardest foes, knowing you didn’t quite earn it yourself. If you want the payoff without the effort, you may as well be using Cheat Engine if you’re playing on PC. At least that’s free.

Looking beyond the unwanted extras, much of what makes Disgaea great is on show here. If you get tired of grinding levels for your cohort of corruption, you can get to work on levelling up their items through the Item World. Using this chain of randomly generated levels, you can delve deep and reap incredible rewards. You also have Chara World, which is used to increase certain character attributes, though if you’ve previously played Disgaea 5 you may be left a little disappointed. Where Disgaea 5 evolved Chara World to be a cute board game and something entirely its own, Disgaea 4’s implementation is a carbon copy of Item World. Random levels to get through, with permanent bonuses waiting at the end for you. They’re both certainly fun, but going back to Disgaea 4 now, I really do appreciate the changes made by its successor. It’s not that the Chara World on offer here is bad, it’s just nothing particularly different. If you’ve been grinding Item World for a few hours, you probably wouldn’t want to jump into Chara World for more of the same. I live in hope the upcoming Disgaea 6 can evolve these features further, though exactly what I want to be added remains somewhat of an unknown. 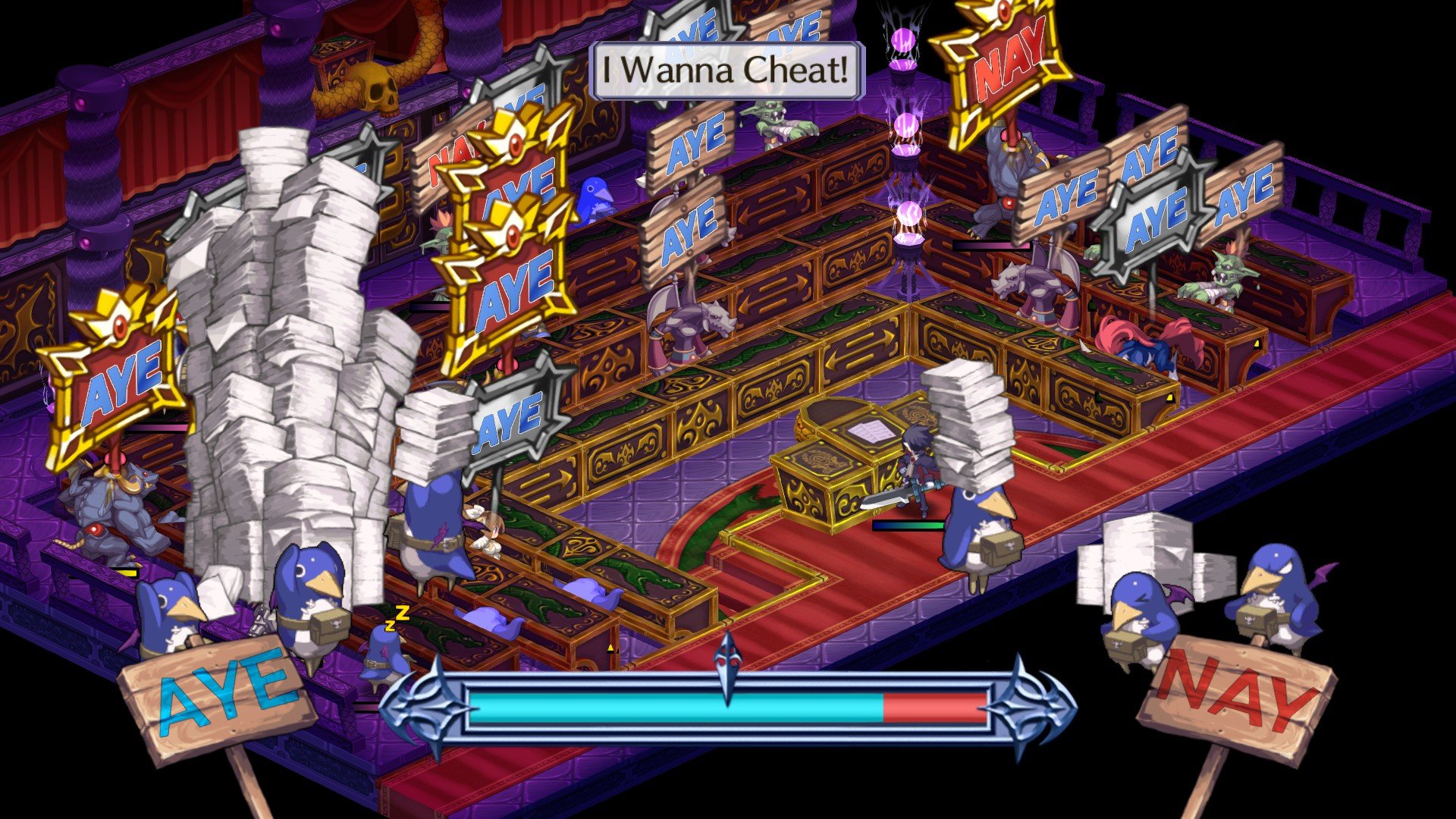 In this house, we cheat.

To give a brief rundown of the PC port, I can say it's fine. There's no real frills, but it runs well. Testing it on my 1440p ultrawide monitor, the game did run at its native resolution, albeit with the somewhat expected black bars. The mouse and keyboard support is equally fine, though perhaps a little clumsy. There's just something unsettling about the screen panning when you click the mouse on a tile. If camera movement and tile selection were detached, I think I'd have had a far more comfortable experience, but as things stand I'd probably recommend using a controller.

All things considered, I struggle to contest that Disgaea 4 Complete+ is a great entry to the series. While I definitely wouldn’t call it the definitive edition, with its additions being more detrimental than positive, it’s great to see it hit both the Switch and PC for an unparalleled sense of availability. If you enjoyed Disgaea 5 and haven’t had a chance to play any other games in the series, this is one to check out. It’s familiar in all the right ways, and incredibly easy to jump into and fall in love with. Limit your spending to the price of the game, and you’ll have a grand time.