Single player
Local Multiplayer
Online Multiplayer
Co-operative
Looking for a new way to join a cult and get downright spooked with your friends? Well, then look no further!

With the entire world locked down thanks to the COVID-19 pandemic, it’s no wonder that the popularity of co-op games are on the rise. In my experience, it’s been a major way to stay connected with some friends who don’t live in the same city as me and as a result I’m constantly poking around to see what new offerings look interesting enough to pick up. This is what led me to discovering DEVOUR on Steam, a brand new cooperative experience where survival and exorcising a deranged cult leader is the name of the game! Being an aficionado for horror, and wanting to play something new with friends, picking it up was an easy decision, and one that I’ve come to enjoy every minute of. 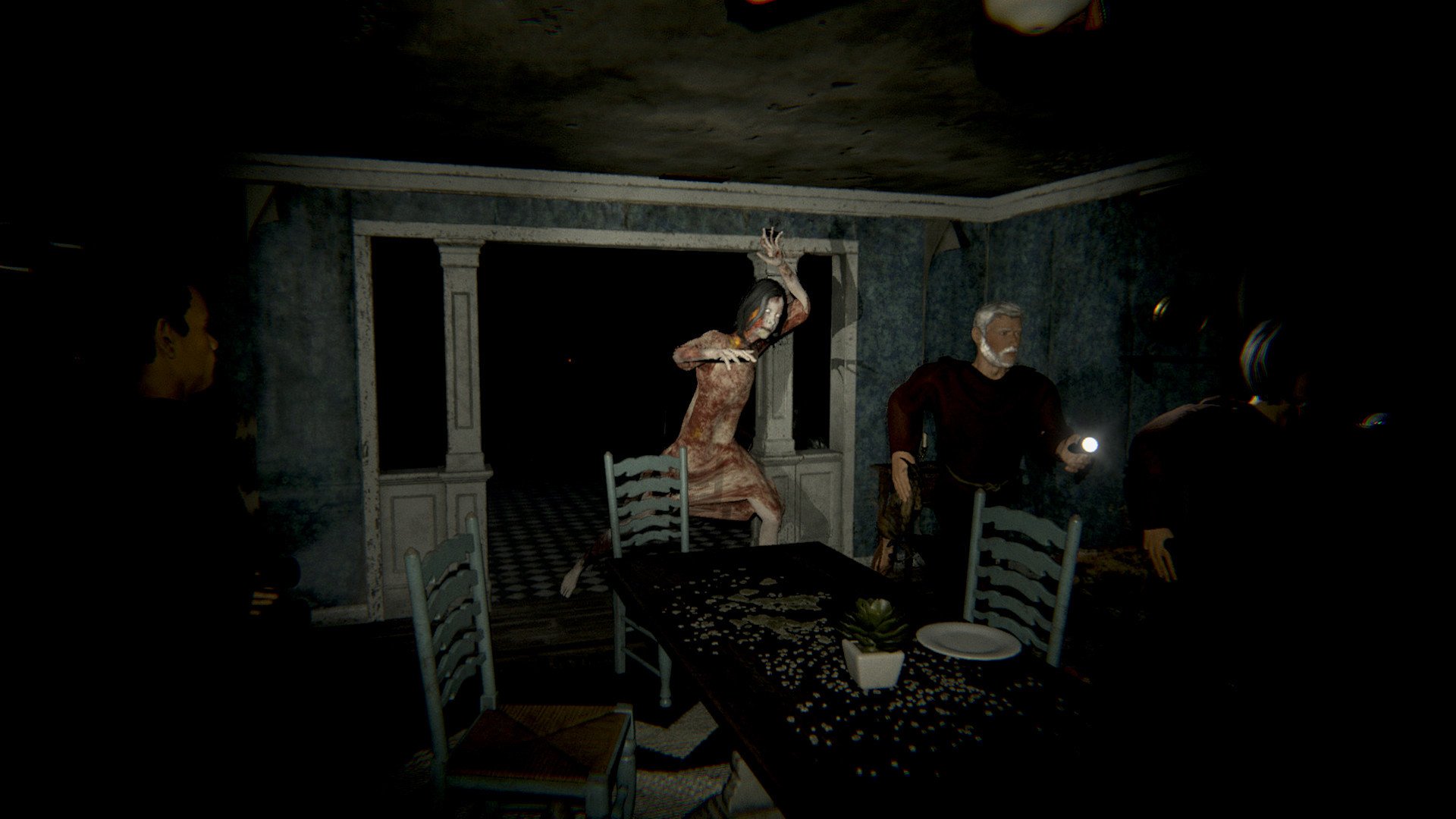 The story of DEVOUR is quite simple, but gets the job done to kick off the experience. You take on the role of one of four cultists, who have ventured to an abandoned house in the middle of nowhere searching for your cult’s leader, Anna. Anna went missing following the completion of a ritual intended to connect her with the cult’s patron, the demon Azazel. The ritual worked, and Anna has been possessed. It’s now up to you and up to three friends to complete a ritual to banish the demon, survive, and avoid being dragged to hell by the possessed cult leader. Lore and gameplay instructions are combined into journal entries left behind by a pre-possession Anna, and tell the story of her slow descent. But this is a game where the story is absolutely secondary; the focus is instead placed upon the gameplay, and the horror you and your friends find yourselves trapped within. In that regard, I feel the game is a massive success, and sort of forgives the minimal story.

From a gameplay perspective, DEVOUR is very similar to other “find and collect” horror games, like the Slender series of games and its various clones. You wander around some claustrophobic environments, have a flashlight as your only tool for light and defense, and must collect thirty macguffins in total; ten bales of hay to lure in goats, ten goats to sacrifice at an altar, and ten gas canisters to light the goats ablaze to complete the ritual sacrifice. All of this is in order to banish the demon possessing Anna, who all the while is pursuing you and your party with ever increasing tenacity. The flashlight’s UV light setting is the only weapon you have to burn summoned demons and calm Anna down during her rampages, otherwise the name of the game is gathering resources and pushing your way through as quickly as possible. One note is that there isn’t a scaled difficulty to make things easier if you’re playing alone, or with less than four people. The easiest way to make it through is absolutely with a full party of four, which obviously poses its own challenges when you consider scheduling a time to actually play. The game does have open multiplayer options, but I personally haven’t had a ton of luck in getting matched in the game. Even with four players though, this game can be brutally difficult if your strategy isn’t perfect; when in a fury, Anna can make it across the map at lightning speeds to stop you in your tracks with a classic jumpscare. This doesn’t mean death though, as you stay in play in an injured state indefinitely while waiting for a teammate to find and heal you. Only when all players have been incapacitated does Anna win. After you’ve completed the base game, the difficulty can be stepped up a notch in the Hard and Nightmare difficulty modes. Hard mode adds a recharge to your sprinting and reduces the efficiency of your UV light, while Nightmare completely strips you of the UV light. Now not only do you have no option besides hiding when it comes to Anna, but her demonic minions can no longer be defeated. These modes definitely add a new layer of difficulty to an already challenging game, though never once did I feel the game was “unfair,” or “cheap.” I was still having a blast as my entire team got wiped out and dragged to hell, and I attribute that to the fun of attempting to survive with friends. Though single player is definitely an option, it’s clear to me that this is a co-op game through and through, and that’s where DEVOUR is at its most entertaining. 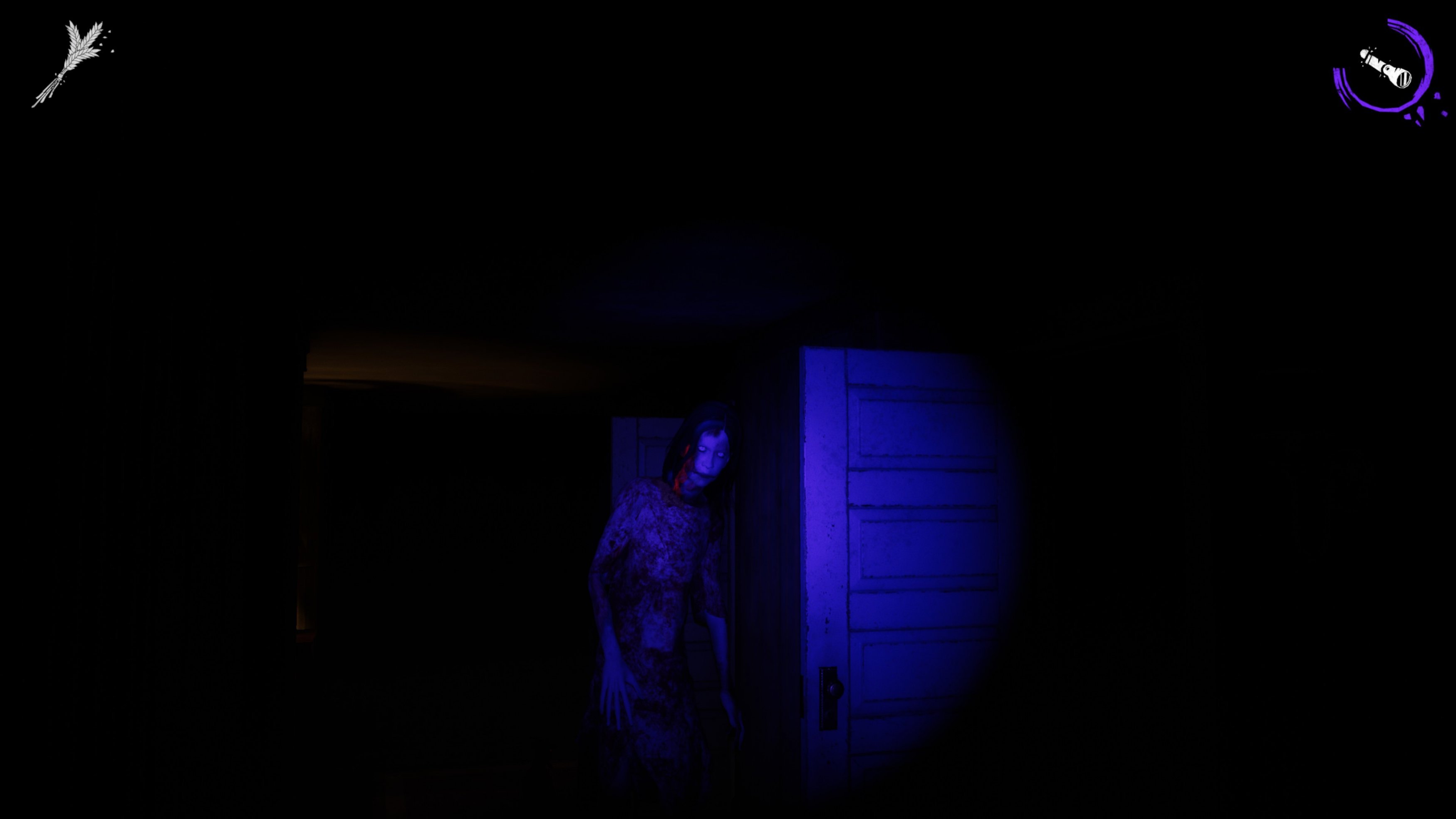 Where DEVOUR truly excels, in my mind, is its ability to build tension and keep you on your toes; every element comes together to create a perfectly horrifying experience, which I feel makes the often overplayed jump scares still effective when you do get hit with one. The flashlights field of view is dramatically limited, leaving nearly 75% of the map unknown to you at any given time. The layout of the house is cramped and tight enough that I feel the anxiety of being hunted in close quarters from my very first step inside. And on the opposite end, the outdoor sections feel so open that with the limited light, anxiety is constantly building. Running into Anna at any time fills me with sense of unease, even if she isn't actively pursuing me; the way she shambles around the house matches the bloodied corpselike design very well, and feels natural. When in a chase, her limbs flail in an almost unnatural way that just adds to this creep factor. The sound design aids this, cycling through keeping silent as you wander, to hearing Anna’s sobs as you get closer to her, and finally her demonic screaming as she begins rushing toward her next victim. Rarely did I ever feel “safe” while playing DEVOUR, and those times that I did were swiftly met with the realization that I really shouldn’t. It’s an excellent design for a horror game, and while it might not necessarily be “new,” it’s masterfully executed here.

I think my biggest issue with the game might be that, as of the writing of this review, there isn’t actually a ton of content. As of now, there’s a single map and three game modes that you can play. While the $5 price point definitely reflects this, I’ve still noticed that it feels many gamers wanting more, which in a way reflects the quality of the experience that DEVOUR achieves. With all of that being said, the five person development team has been hard at work on an update to the game that brings a new map, location, and story to the game. In fact, in the period between writing this review and it being published, the team released an update that brought the "Hard" difficulty mode to the game, as well as a few new cosmetic unlockables. With regular updates, more content on the way, and so much fun packed into such an affordable price, it’s no wonder I’ve quickly grown attached to this game. While it doesn’t do anything necessarily new or groundbreaking, it offers an experience that keeps me wanting more, and bugging my friends about setting up a time to play again.

What We Liked ...
What We Didn't Like ...
7
Gameplay
Simple but effective is the best way to put it. The gameplay meshes well with the presentation, and in tandem they create a wonderfully spooky experience.
8
Presentation
While the game is certainly limited in terms of its graphical presentation, this is more than made up for with the atmosphere, sound design, and general tension that is built as you play through.
6
Lasting Appeal
While more content is in development, one map and three gameplay modes is definitely a bit short when it comes to things to do. Even despite the cheap price tag, it does manage to feel a bit limited currently.
8.5
out of 10

As a horror fan, this game scratches every itch I want when it comes to a horror game, and it does so while allowing me to experience it with friends. It's fun, spooky, and keeps me effectively frightened every time I get into it. Definitely recommended for fans of all things horror, or if you're just looking for something new to play with some buddies!
Reactions: Julie_Pilgrim, ZeroT21, Mama Looigi and 4 others
Share:
Facebook Twitter Reddit Pinterest Tumblr WhatsApp Email Share Link
I got spooked literally just reading this review 0__0

There's not, but that's something I'd love to see in a future update!
Reactions: Julie_Pilgrim and mattyxarope
Anti women.
Reported for not burning men and perpetuating burning women like witches of old.

I'll call snowflakes everywhere to ban this game.
Women are entitled to be whatever they want, even messed up demons. No burning!
So, come with me friends! Let's burn them anti possessed women down!
Such a missed opportunity with the lack of VR, well there is VorpX or virtual desktop that could work . . .
I don't care much for horror game usually unless they are in VR in which case i usually enjoy them a lot
Reactions: mattyxarope and Julie_Pilgrim
Games nowadays are lacking one main ingredient: The charismatic hero.
At one point it's stated there are three game modes, while later it's said there's two.
Reactions: RyRyIV
Another for the infinite backlog!

D34DL1N3R said:
At one point it's stated there are three game modes, while later it's said there's two.
Click to expand...

That’s on me; in the period of limbo waiting for this to be published after writing, the game actually got an update adding that third game mode. I thought I fixed each instance of two game modes to three, but clearly I did not! Thanks for the catch, updating the review accordingly
Reactions: D34DL1N3R
So its basically equal to Pacify (also on steam) or somewhat similar.