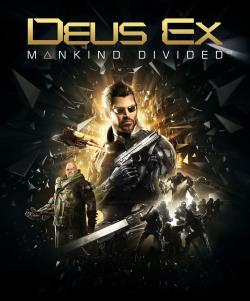 UPDATE (8/23): Now that the embargo is over and the game is out, I can post actual, in-game screenshots from the Xbox One version of the game! You can check out the screenshots here: http://imgur.com/a/fG97z

Deus Ex: Mankind Divided (DXMD) takes place two years after the infamous Aug Incident of 2027. For those unaware, the Aug Incident takes place during the story of Human Revolution (HR), where a signal released by Hugh Darrow causes all augmented humans to go temporarily insane, forcing them to violently attack any individual they see. In 2029, the public has become fearful and hateful of any and all humans with augmentations, going so far as to enforce a "Mechanical Apartheid" in countries around the world. Players continue the role of Adam Jensen who is now a part of a recently created counterterrorism squad “Task Force 29”. After several terrorist attacks in the Czech Republic, Jensen is tasked with investigating the suspicious activities of the Augmented Rights Coalition, or ARC, while navigating the segregated streets of Prague. Mankind Divided continues the trend of multiple paths, where Jensen must choose between various organizations he works with in order to discover the underlying threat of the evil, sneaky Illuminati! One of the unfortunate things about Mankind Divided, however, is that save data from Human Revolution can't be transferred over, meaning any choice you chose during the previous game is pretty much ignored. The world goes into chaos regardless of your previous choices, which is a little disappointing, but understandable when you consider the rather long gap in release times.

Gameplay wise, Mankind Divided uses all of the best mechanics from HR and improves upon them in various ways. The augment system maintains the same general augments from Human Revolution, but adds in new "experimental augments" available to Jensen that were discovered to be "hidden" in his body. These new augments add various features to Jensen's body that become especially useful in combat, including a new "TESLA" stun augment, use of the Nano-blade attachment, remote hacking, a "TITAN" exo-skin that greatly reduces damage, even the PEPS system returns as an augment instead of a separate weapon! Previous augments are also available, but have to be "re-learned" for "story" reasons. The combat of DXMD stays relatively the same, featuring standard FPS mechanics, this time around giving players more options for a non-lethal playthrough thanks to the additional augments. The snap-cover system introduced in Human Revolution also makes a comeback, this time focusing more on stealth and seeing enemies than simply providing a piece of cover. When going into cover, the game brings the camera out into third person mode, allowing players to see around corners and get a general idea of where enemies patrol, which a first person perspective might otherwise hide. Developers added in the option to dash between pieces of cover, which is useful when trying to quickly navigate areas with many guards without being seen too often. Guns acquired in DXMD can be customized to increase their functionality; you can add laser sights to pistols, change between various ammo types like EMP or armor piercing rounds, add scopes or silencers etc. Unfortunately, because of these additional customization options, there were very few new guns introduced (I only came by a whole one throughout my playthrough that was anything new).

Not everything is upgraded, however. Hacking systems, for instance, have received virtually no additional attention and remain the same "capture nodes to get to the required node" system as HR. The social system also appears to be unchanged as well, users choose between three different "emotional" responses and, depending on the NPC you're conversing with, choosing incorrectly will result in a failure to persuade them to do whatever it is you need them to do.

Graphics-wise, Mankind Divided is a gorgeous cyberpunk world...with a few issues in the details. While it does manage to look great on consoles (this particular time I played the game on the Xbox One), I experience frame drops in various locations, whether it was just a cutscene conversation or running through the districts in Prague with few civilians around. Texture pop-in can also occur if you're sprinting through city areas too quickly, sometimes being so severe that an entire NPC model would pop-in seconds before you'd reach them. I can only assume this is a console-related issue, and it's entirely possible that the day-one patch that releases with the game may fix these issues. Voice acting in the game is excellent, the languages and accents used by characters fit the area perfectly...however, lip-syncing is at best entirely off. This particular detail wouldn't necessarily be too painful if it weren't for the fact that every conversation has this issue, regardless of language spoken the lip-syncing simply doesn't match at all and looks ridiculous.

Included with Deus Ex: Mankind Divided is a brand new game mode titled Breach, which is an arcade style puzzle shooter that takes place in a virtual reality simulation. Breach takes on a more "tech" approach to the Deus Ex universe, revolving around the Neural SubNet technology showcased in the main game. You play as a "Ripper", a fancy title for what is essentially a hacker in this new-aged world. Your task is to infiltrate various security files from servers owned by major corporations in order to discover and uncover any hidden data they don't want the world to see. Hacking these servers brings you into what can only be described as a VR test chamber, where you must explore the area and access "data cubes" that contain those hidden secrets, which you then upload. Once you access enough data, you're rewarded with XP, cash and occasionally booster packs that award you various weapons and items that can be used in these areas. As in the main game, there are various obstacles in your way which you can disable with your weapons or avoid altogether with various stealth tactics. Cameras and turrets act as "protection software" in this world, and if you're detected by these security measures AI "enemies" will spawn which can and will hunt you down as well as create additional obstacles such as locks on doors. These arcade levels are relatively short, usually taking only a couple minutes to complete, and your score is added to a global leaderboard where you can compare and compete against players around the world!

This mode does feature in-game purchases, where you can buy "deluxe" booster packs which ups the chance of receiving higher level weapons and items. Thankfully, these types of boosters can be purchased with the in-game currency you receive when completing missions and aren't overpriced to the point where it'd be unreasonable to do so. Overall, Breach is relatively enjoyable. If you want to wind down after an intense session with DXMD, it's laid-back, quick finish style of gameplay is definitely a great way to do it while staying in the Deus Ex universe.

What We Liked ...
What We Didn't Like ...
10
Gameplay
Virtually every gameplay aspect of Mankind Divided is perfect. The combat works well, whether you want to try non-lethal sneaking or just run and gun everywhere. The new augments are definitely welcome, and add in new ways to play. The additional game mode Breach is also generally enjoyable.
9
Presentation
DXMD looks great. The cyberpunk, future-y aesthetic is definitely fitting and, despite the occasional performance issues, really puts you in Adam Jensen's world. Voice acting follows the main location language and accent perfectly.
8
Lasting Appeal
There are plenty of branching paths that players can take in DXMD, each giving vastly different results. With the addition of New Game +, you can replay the game and go for the other choices while maintaining your augments from the previous saves.
9
out of 10

Overall, Deus Ex Mankind Divided is a worthy successor. The gameplay is near-perfect, the story has wonderful twists and turns throughout and despite some occasional graphical issues still manages to look great. If you're a fan of the Deus Ex universe, then I absolutely recommend you pick this up.
Reactions: Jiehfeng, EyeZ, p1ngpong and 3 others
Share:
Facebook Twitter Reddit Pinterest Tumblr WhatsApp Email Share Link
Sounds like many of the things I was not sure about from HR (never played any DLC) have been sorted here.
It looks and sounds great I'm looking forward to getting stuck in next week and the addition of NG+ has sweetened the deal for me.
"Ripper"? In virtual reality? That's interesting. There was a game based around the idea of a serial killer murdering people through VR hacking under the same title, starring Christopher Walken, Paul Giamatti, Burges Meredith and other stars of the 90'ies. Really good soundtrack, too - the theme was Blue Öyster Club's "Don't Fear the Reaper". I wonder if that's a coincidence.

https://en.wikipedia.org/wiki/Ripper_(video_game)
Reactions: Jiehfeng
Really liking the game, would guess I'm about halfway through. My friend and I started the same time and we play in a party but he just steamrolled the story and finished it last night in about 12 hours, which is pretty short imo. He literally killed everyone too lol
I'm on about 15hrs and have just been exploring, which is awesome and rewarding and doing loads of side missions which have been really interesting.
Objective markers for sidequests are pretty bad though. Had me running around in circles a few times!
No lypsync issues on PS4 but it has crashed to dash a few times.
Reactions: Jiehfeng

@ The Real Jdbye: and a monday 2 minutes ago
Chat 2