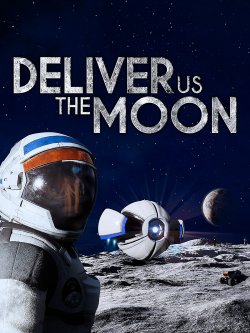 Deliver Us The Moon is a story-driven walking simulator/puzzle game from Indie Dev studio KeokeN Interactive that follows a no-name protagonist on a mission to fix a power station on the Moon! You're the Earth's last hope, can you make it through?

Deliver Us The Moon is a story-driven walking simulator/puzzle game that takes place in an apocalyptic-esque future, where, after depleting the world’s natural resources, Earth’s main supply of energy comes from the Moon via helium, which is transmitted from the Moon to Earth via microwaves...somehow, using what’s called the MPT system. But, of course, things go wrong and suddenly all power, contact, and information from the Moon just plain stops. Oh no! Players take on the role of a seemingly-unnamed astronaut, apparently the “last one ever”, and are tasked with making their way to the Moon to figure out just what in tarnation is going on. The beginning of the game starts out at a rocket launch site on Earth, where the player is tasked with getting the rocket prepped and ready to go so you can make your way to the Moon with the help of Claire Johanson, the daughter of Issac Johanson, the creator of the MPT project. Of course, “do or die” operations of this nature always have various things going wrong, and that kind of describes the majority of the plot and events that will happen to you as you play through Deliver Us The Moon. The story of the game is mainly eked out via audio logs from Sarah Baker, a software engineer who was initially tasked with investigating the blackout that caused all the issues...and then the game just kind of comes to an unsatisfactory and abrupt end after only four or five hours, leaving a fair few big questions just plain unanswered.

The gameplay is fairly basic. You get an objective, you make your way to the objective while occasionally solving puzzles, and then you reach that objective and do some more puzzles...most of which are the usual, simple things you see in walking simulators. Cleaning out areas to make a path you can move through, rerouting energy to power doors or equipment, fetching items to fix other items, using a laser cutter to cut through doors or open up emergency supplies, it's all here. As you explore the moon base, you’ll also come across the “ASE”, a little robotic companion that's a tad similar to the cores seen in Portal, which has some basic functions. It can be used to open doors and access areas that are otherwise locked down, and can access “memories” you’ll find strewn about the empty space stations and areas you can explore to eke out a bit of the rather sparse story. You can also manually control the ASE, mainly to navigate tight spaces so you can activate objects or open doors. Not very unique gameplay overall, in my opinion, but what makes it truly enjoyable is the scenery and environments in which the game is played. Deliver Us The Moon takes place generally on or around the Earth’s moon. Whether it’s floating in zero gravity, walking around on the moon base, or driving the moon buggy, the environments always felt “just right” and what you might expect of current day humans ever reach early space colonization. Perhaps the only complaint that could be made about the environments, overall, is how linear the whole game is. Despite being on the Moon and in space...there's really not many places "out of the way" that you can go to that has any meaningful content in it.

One of the more unique things you’ll find about Deliver Us The Moon as you play is its shift in perspectives depending on what you’re doing. While walking around in areas with gravity, you get to enjoy the game in a third person view to give you a better “overall” view of the environments you’re walking in. In zero gravity environments, you’re then brought into first person view so you can navigate narrow corridors and spaces a bit more easily, and without getting too motion sick. But, all said and done, I honestly would’ve preferred a simple first person view throughout the whole game rather than the swap. Third person is nice if you’re just walking around and want to enjoy the scenery, but while looking around for items to inspect and interact with in a setting with a lot of clutter and non-interactable objects, it can be a bit hard with the somewhat low FOV to find what you're looking for. Moving in zero gravity feels much like any other space exploration game: it's floaty and clumsy and feels as you'd expect...but in some cases, doesn't really make much sense, although I'll admit I'm being a little nitpicky here. There's a particular cutscene where the player character is expelled out of a space station rather forcefully, and starts frantically trying to grab any and every piece of debris in an attempt to slow their momentum and stop, which is exactly what you'd expect in a general scenario like that. But then after you stop...you're suddenly able to move through empty space without any kind of jetpack or propulsion system? Which makes sense when you're in a cramped, narrow space station, but not so much when you're floating in space. It's not a big deal, really, but it sort of breaks the immersion and could've been better designed overall. Adding in a mechanic that requires you to push off of objects, or just plain giving you some small propulsion system so it makes a little more sense would be nice.

So is it worth playing? I suppose that depends. If you're looking for a short and easy game to relax to, absolutely. Deliver Us The Moon's environments and design are quite well done, even if the gameplay isn't that exciting or new. If you're looking for an in-depth story or a more exciting experience, perhaps you should pass and look for something else.