As the PlayStation 4's life slowly comes to a close, and as The Last of Us Part II's inevitable release approaches, we take a detour for one of the last exclusive PS4 titles, in the form of Days Gone.

Bend Studio is a relatively new addition to Sony's repertoire of renowned game developers who create big budget, high profile exclusive releases for each entry in the PlayStation line. Named after the town they were founded in, Bend, Oregon, the studio once had a much more notorious name: Eidetic. Under that original brand, they created their very first game...which happened to be Bubsy 3D. Nearly 25 years have passed since that fateful time, with Bend Studio going on to develop the Syphon Filter series in addition to handheld titles like Uncharted: Golden Abyss and Resistance: Retribution. All that experience has now culminated in the team getting their chance to shine, by having the spotlight on them at a time where no other major first-party PS4 game is due out for a while. Insomniac Games and Sony Santa Monica have hit it out of the park lately when it comes to AAA exclusives, so Days Gone has a lot to live up to, but with a skeptical audience and a lot of pressure, does it hold up? 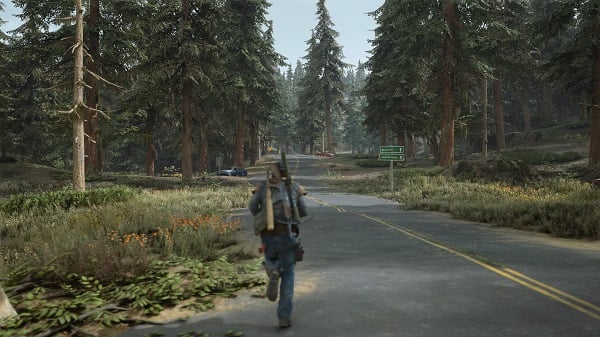 Days Gone sets you in the shoes of Deacon St. John, a rugged biker who happens to have a tragic backstory thanks to the advent of a zombie invasion. If you ignore WWII shooters, post-apocalyptic zombie based games are probably the most popular and trodden genre of the last console generation. A mere handful of years ago, Dead Rising, The Last of Us, The Walking Dead, Left 4 Dead, Red Dead Redemption: Undead Nightmare, and Dead Island were inundating the market with every possible machination of undead-slaying gameplay you could think of. This in and of itself is not a particular fault of Days Gone, but the moment you gain control of Deacon, there's a definite sense of tired mechanics and dated trends hovering over the experience.

Fortunately, the setting of Oregon makes for a beautiful game; one that is stunning and vibrant in its realistic world, setting it apart visually from its darker, drabber contemporaries. The absolute highlight of Days Gone is its graphics which do so well at drawing players in; foreboding areas loom over you, fog surrounding the entire area, enhancing the spooky tone of waiting for that inevitable zombie to jump out of the darkness at any moment. Or the brighter fields of greenery, full of radiant sunlight streaming down as you race through mountainous pathways on your motorcycle. If there's one thing that Days Gone does well, then it's definitely the graphics.

However, the moment that the opening cutscene gave way to gameplay, a whole host of problems became apparent with the game. To begin, if you don't happen to own a PlayStation 4 Pro, you might just want to sit this one out, as there's a good chance you won't enjoy playing the game. The original PS4 is almost six years old now, and there hasn't been a moment more apparent than this where I've noticed how unkind time has been to the hardware. Right at the outset, we have Deacon blasting through a dense forest on his bike, chasing down a criminal. It looks absolutely stunning; an impressive graphical showcase. Not five seconds later, though, does the framerate begin to dip, and not in the typical just-below-30fps-console type fashion. Merely controlling the motorcycle was much more difficult than it should have been--it was already subpar to begin with--but with the console chugging, barely able to keep up, it became more a game of predicting where the hazards might be, rather than actually responding to what was happening on screen. Even the slightest turn was an arduous task, resulting in an atrocious introductory mission. 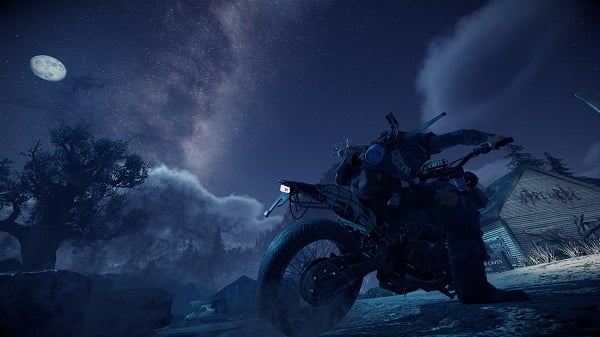 Beyond that, things improved from there, though the performance dips were a constant throughout my time with the game. When it comes to the gameplay, if you've played any single open world game for a significant amount of time, you'll already have most of Days Gone's mechanics down perfectly. It's a third-person shooter, the protagonist is a gruff, sarcastic tough guy, you have to craft weapons and scavenge areas for limited ammo, while fighting enemies to obtain XP in order to fill out your skill tree, and then finish off areas by scaling a tall tower to fill out your map. Everything is cut-and-dry, comfortable and recognizable in some ways since you can just jump in and know what you're doing, but it can also be a detriment since many gamers out there are likely weary from having done these same things in 20 other games previous to this.

The one unique thing about Days Gone, however, is your motorcycle. From the very moment you're introduced to it, Deacon's bond with his precious bike becomes your own. Not only is it your main method of transportation through the zombie-ridden (they're called Freakers here) countryside, but it's also where you fast travel to unlocked refugee camps and save your progress. Protecting it is always your number 1 priority, because if the bike gets damaged or runs out of gas, you're going to have to hunt down fuel and scrap to repair it before moving on. There are also numerous upgrades you can get for it, like the incredibly useful nitrous tank, or stat boosts to speed, fuel capacity, and durability. There's a definite feeling of pride when you ride your custom tricked-out motorcycle to and from mission objectives.

Deacon himself has upgrades he can undergo as well; you'll find NERO checkpoints dotted around the world, which will require you to solve a slight puzzle to unlock a door and fight off a hoard of Freakers to get to the goodies within. Doing so will net you an injector which gives you a permanent upgrade to one of your three attributes: stamina, for dodging and running, health, for keeping yourself alive longer, and focus, which gives you a longer "bullet time" slowdown effect for precisely shooting enemies down. 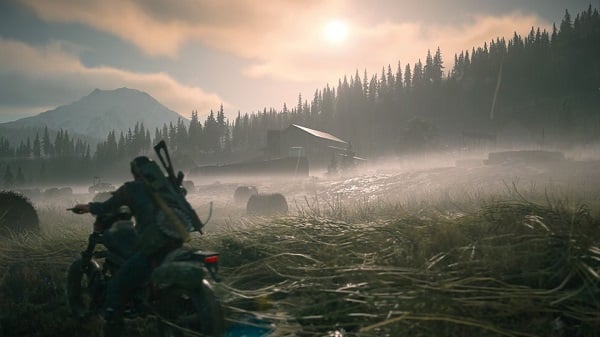 At the start of the game, combat isn't something you'll want to throw yourself into with abandon. Freakers can be tough, and angering one will attract more, so you'll want to pick fights carefully. Once you acquire enough materials and get ahold of some better gear, you can start taking down enemies with more confidence, though you're taught early-on to run from the massive hordes of Freakers that travel in groups of hundreds. Melee weapons have a nice heft to them, and feel satisfying to beat foes down with, while ranged guns are serviceable--I always favored baseball bats and axes. A major complaint that I had that was partly an issue with combat, though it was an annoyance throughout the entire game, was just how much space Deacon takes up. The game won't ever let you forget that he's the main character you're in control of, because when he's not riding his bike, he's taking up a ridiculous amount of the screen. At times, I continually found myself trying to swing the camera around to see what was directly in front of me, as it was so permanently zoomed into focus above Deacon's shoulder.

If you try to invest yourself into the game and ride it out for the 20-or-so hour adventure, you'll wind up on a middling journey doing the same things you've grown accustomed to in countless other games, just in a prettier package. The story is nothing of interest, either, being too heavy-handed in some parts, or downright confusing at others. Deacon is a typical protagonist, who has all the markings of an action hero; strength, ability to move the plot along, and snarky quips, along with a best friend who's got his back, and an embittered but still helpful nature, which gives him enough reason to assist others in rebuilding settlements, but a dark edge and backstory to keep you wondering what happened to him in the past. It's been done a hundred times, and it'll be done a hundred more. At the very least, if you turn your mind off and dive into the game hoping for some old-fashioned zombie killing fun, it'll tide you over pretty well, assuming you can handle some of the more repetitive missions.

Days Gone is a somewhat of a checklist, cobbling together features from other successful games: it's a little bit Assassin's Creed, a pinch of The Last of Us, sprinkled in with Far Cry, and topped off with some Dead Rising. At its core, Days Gone feels like a game that had a heartfelt development team behind it, but one that tried to incorporate way too many things at once, and because of that, the game feels incohesive. Bend Studio seems to have aimed for creating a landmark open-world zombie game, but by taking so many pre-existing elements from other titles, it never manages to stand out on its own. If you're looking for something familiar that you can jump right into and feel at home with, you might enjoy the content Days Gone has to offer. Otherwise, the game feels so generic, that I can't help but wonder if it would have been more of a success had it released a decade ago, when these concepts weren't as well-worn.