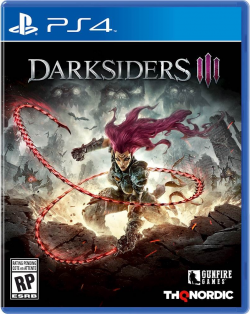 A Journey Through Tedium 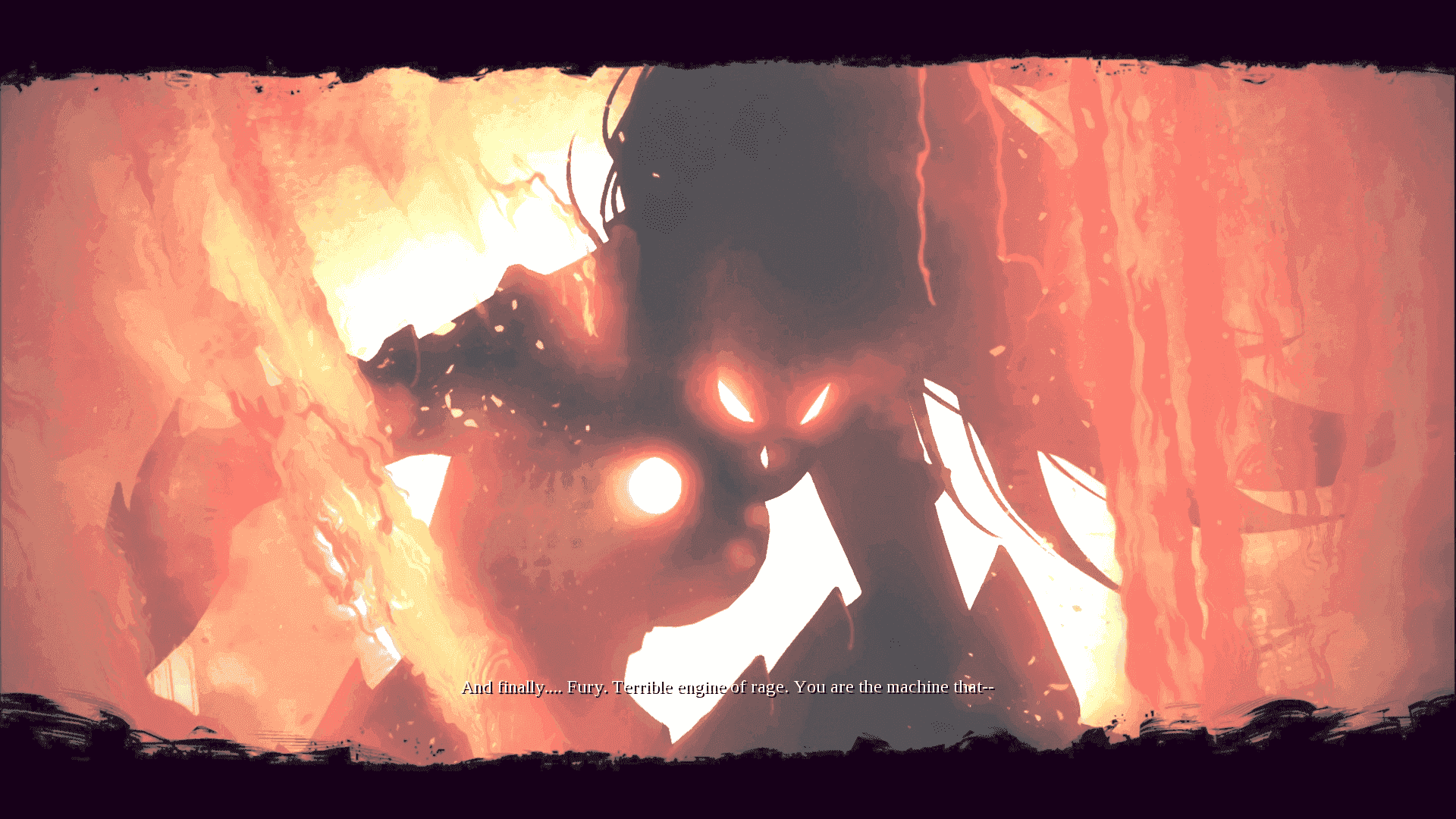 To all those expecting another dark and satisfyingly visceral hack n' slash adventure: turn back now. On the surface, Darksiders III looks like a promising follow-up and trailers, as well as gameplay footage, would bolster this idea. However, once you actually sit down with the game, the flaws start to become apparent almost immediately and the sinking feeling in your gut never goes away.

You are Fury, one of the Four Horsemen, tasked by the Charred Council to eliminate the 7 Deadly Sins that now roam the apocalypse ravaged world. Your brothers have been branded traitors in part of an ongoing conspiracy and the council, not trusting you, sends along a Watcher; A phantasmal being that plays a submissive role to the hot-headed Fury to make sure you stay on task. On the surface, the story is simple, but effective, and is made more intriguing by the fantastic designs and spot-on voice acting of the Sins. Each one is unique and perfectly embodies their namesake, corrupting their surroundings to better fit their twisted vision of an ideal world. 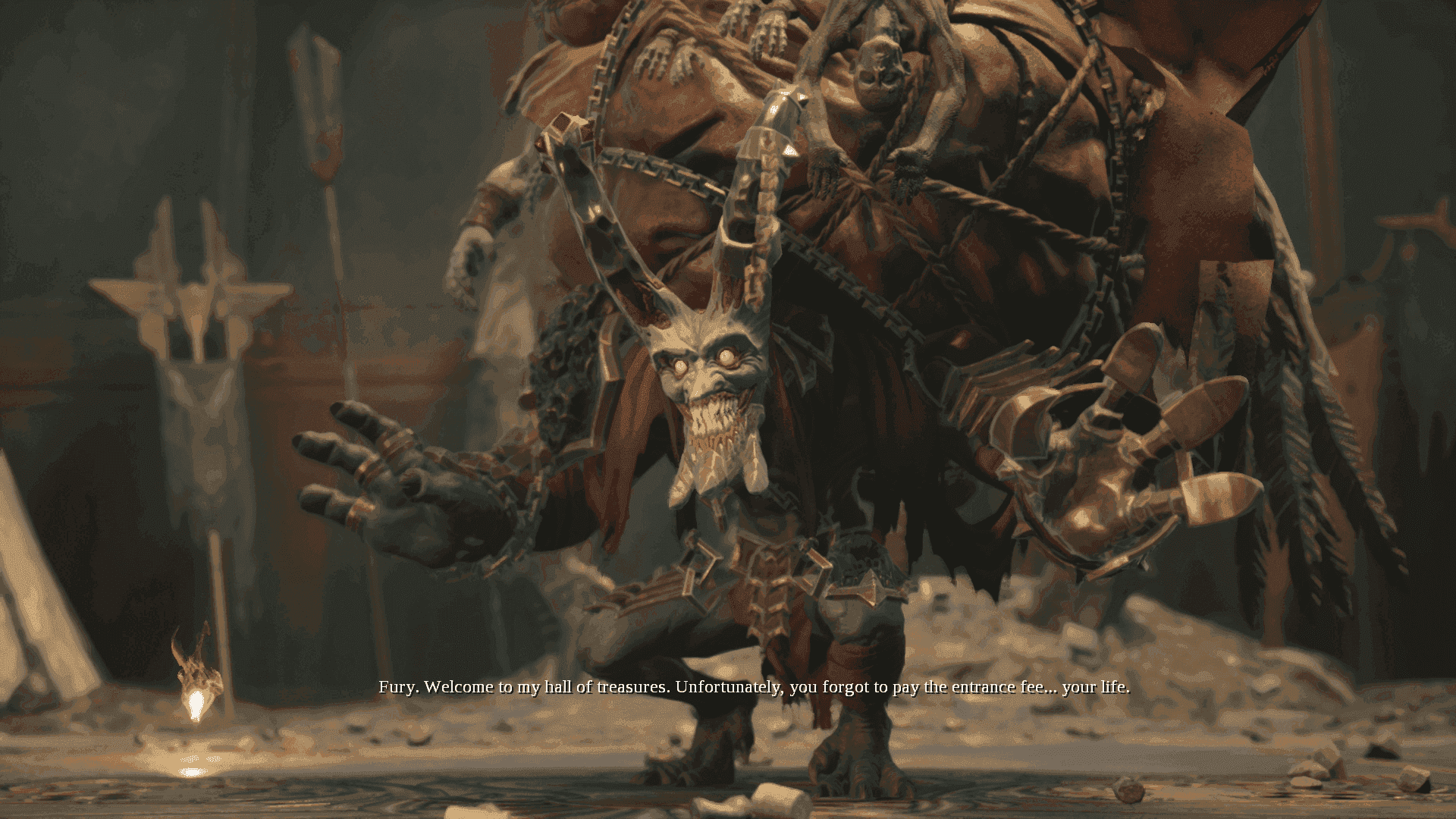 The praise, unfortunately, stops here. The boss fights themselves are uninspired and dull. While each one seems to have at least one unique mechanic, they don't appear fully fleshed out and are actually easier than some of the smaller monsters that roam around in the world. While the game hints at you being able to pursue the Sins in any order you'd like, most paths are locked behind skill barriers-- skills that come from 1 of 4 elemental forms gained through the normal progression of the game, which in turn means you must follow the predominantly linear path laid out to access them.

As you've probably noticed by now, the graphics all seem decidedly "last-gen". Everything is rounded, shiny, and lacking in any sharp defining details. If someone had told me this was an Xbox 360 game, I probably would have believed them. Fury herself looks like she cranked the selfie filter up a couple notches too high, smoothing out all her features and giving her badly out of place makeup. With the camera pulled back, all the models are passable, but it really is a shame more time couldn't have been spent refining the graphics and lighting to really show off all their wonderful designs.

And now, my friends, we must dig into the failures of Darksiders III -- the gameplay. All of the RPG elements have been watered down to nearly useless levels. Let's take a look at the main menu screen: 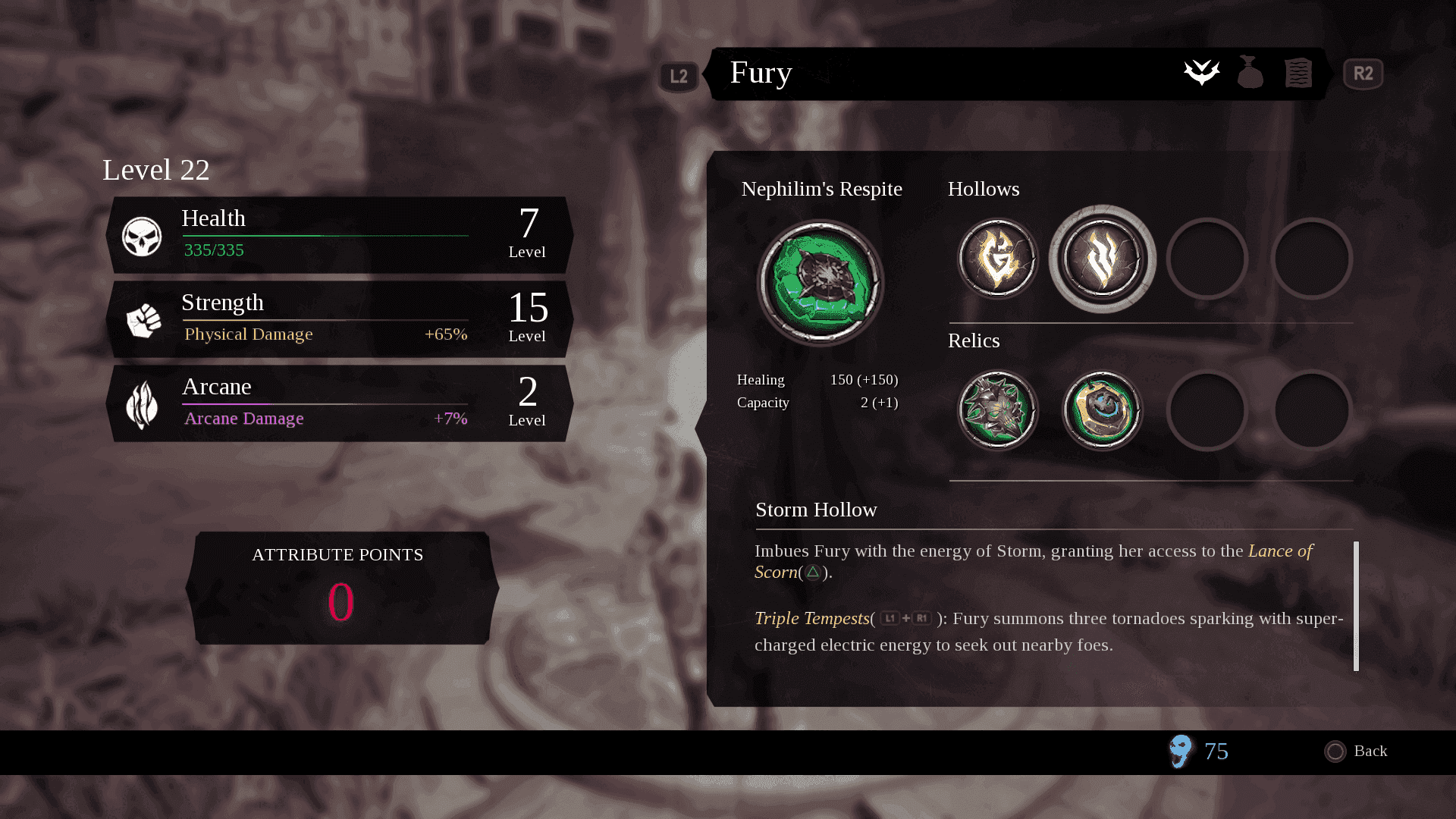 "Levels? Stats? Hollows? Relics? Cool!" Well... not really. The level ups have a minuscule effect on your stats, and all the other "items" are story based objects that don't really do anything and aren't exciting like the abilities you get in the other games. The hollows indicate the elemental forms you can take, but the relics don't really do anything, and the Nephilim's Respite is just your refillable healing potion. 80% of this screen is basically useless and really stretches the concept of the term "inventory" in terms of usefulness. If you've ever played Zelda 64, this feels a lot like the menu screen with your medallions and songs. What this all boils down to is the fact that they could have completely eliminated the half-assed system and just gone with linear level-up stat increases. There is really no need to look at any of the information on this screen or the subsequent menus when all the usable items are shown during play in the bottom corner where you can cycle through them. Weapons can be upgraded and augmented with the fragments of items you find scattered around, but these again make such a small difference that it's really hard to justify collecting all the pieces and going through the hassle of putting everything together in the first place.

Navigation seems fine as you make your way through the first few Sins, but as soon as you need to backtrack, a couple facts hit you like a ton of bricks. First, there's no mini-map or overworld map, and second, the waypoints aren't marked except by a stylized thumbnail of the area they lead to. The compass indicates the general direction of where you need to go, and it does its job well enough, but there is no indication of which waypoint you should start from to progress on your journey, leading to a TON of backtracking and frustration.

The puzzles are superbly integrated into the scenery and look very natural, but that also works to the games detriment as you wander around sometimes wondering what you're supposed to do, when it finally dawns on you that a breaker switch you thought was just a decorative texture is actually a switch needed to open a door.

Platforming is a mess. The ability to swing from your chain-like weapon is neat, but happens at a predetermined speed, height, and distance, meaning you will never fail to complete your swing-jump perfectly. Ledges, on the other hand, are very finicky and often require several attempts to grab a hold of. On more than one occasion, the triple jump was not giving me enough height to reach the platform to take me into the next area (or at least the ledge wasn't detecting me being high enough). In those cases, I had to find a nearby jutting rock or piece of scenery to jam myself into and jump from before it pushed me off just to be able to progress. If that was the intended strategy, it was definitely poor design, but if it was just the ledge not detecting properly, then it was bad programming.

The combat is the final nail in the coffin for this game, and it can be pinpointed to one thing in particular: the dodge mechanic. The dodge in Darksiders III doesn't appear to give you any invincibility during its animation (iframes) and the dodge-counter trigger is incredibly unreliable, triggering at the oddest times or not at all even when you feel like you've performed a perfect dodge. Small packs of enemies are much more difficult than boss fights because "dodging" in any direction leaves you completely open to attacks from other enemies, and even the slow counter-attack animation only seems to have a couple iframes at the beginning, if at all, again leaving you open to beatings from other enemies. Some enemies have an attack swing so large that dodging has zero effect since you get no window of safety and you can't bound far enough to the side or backwards to avoid their weapons. While you do appear to be able to cancel your attack animations with a dodge, this too is extremely inconsistent, working great when practicing a particular attack/cancel combo but always seems to fail in actual live combat.

If you check out the above clip, you can see that the pack of demons get in damage no matter which way I try dodging, and the shoddy lock-on camera confounds the problem when an enemy jumps out of nowhere, trapping me against the vehicle and killing me. There are several enemies that appear out of nowhere, fire projectiles, or burst from inside egg sacs that require absolute perfect distancing to break safely or frame perfect dodging to avoid damage when they explode out of them. These things would be minor complaints if everything didn't do so much damage to you. Enemies with hammers early on can 2-shot you, and since they come in packs in narrow tunnels with bad camera placement, the game gives you very little time to enjoy it before it starts hitting you with the cheap shots.

Could this game be fixed with patches? I would wager yes. If they could appropriately scale some of the monsters and just add some gosh darned iframes to the dodge and dodge-counter then I believe this could be a simple but very enjoyable hack and slash adventure game. I really wanted to like this entry in the series as much as I did its predecessors, but what happened in the clip seen above (and every time it happened to me before) was truly "the straw that broke the camels back" in my case and I, sadly, haven't touched it since.