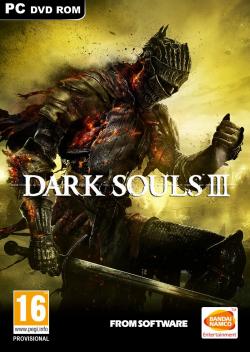 Dark Souls 3 is From Software’s next entry in their Souls series. Promising a sequel that blends the Souls games together while adding something new, has From Software hit their mark?

NOTE: This review contains minor (and some major) spoilers. If you want to play Dark Souls 3 and not spoil yourself on some areas and bosses, I'd suggest you avoid reading this review.

Yes, yes they damn well did. Dark Souls 3 offers plenty of new enemies, weapons, areas, and even some new game mechanics while also keeping, and reviving, a few of their old ones from previous titles in the series. Players first start the game in a graveyard after a quick 3 minute cutscene explaining the Lords of Cinder and the history of Lothric. Woo! As in typical Souls game fashion, you’re simply thrown into the world after this cutscene with little other verbal explanation of the story (as a majority of the Lore you’d expect to find in Souls games are included in item descriptions and such). You’re basically on your own from this point on, where you’ll need to learn the ins and outs of typical Dark Souls combat. One of the main mechanics added in Dark Souls 3 is Weapon Arts. They can get a little complicated to explain, but the basic idea is each weapon type you come across in Lothric has its own battle art skill that can be used (at the expense of Focus Points, or “FP”, AKA the Mana bar from Demon's Souls), ranging from buffing weapons with elemental or extra damages/effects, performing special attacks that break through an enemies guard, parrying with a shield, buffing your defenses and more. These skills can be used to obtain an advantage against certain foes, like breaking the guard on those nasty enemies that like to turtle behind a shield, or simply giving the ability to parry and riposte an enemies attack.

Dark Souls 3 also includes a hella amount of throwback to previous Souls games. You’ll find familiar enemies, items, weapons, and even entire areas and bosses that will give your Souls nostalgia boner a good tug. I’ve found Black Knights from Dark Souls 1, the Storm Ruler sword from Demon’s Souls, Havel the Rock, Andre of mother-effing Astora chilling as a blacksmith in Firelink Shrine, Drakelords will chill around an eerily familiar Archdragon Peak where new bell maidens reminiscent of Bloodborne summon them in... It’s simply a glorious concoction of Souls game feels. The world design starts out in a similar fashion to Demon’s Souls, starting in a Nexus-like Firelink Shrine where players warp into the Lothric area and then have to explore and kill the four Lords of Cinder in order to open the Kiln of the First Flame and beat up the “Souls of Cinder” (AKA new Gwyn). Like previous Souls games, Dark Souls 3 offers multiple endings (which I won’t spoil here) that can vastly change the way the story concludes.

It’s not all fun and games though. Souls games have always been praised (and hated, and rage quitted on) for their “difficulty”. Dark Souls 3 continues on with this tradition, offering unforgiveable enemies, bosses, and occasionally some PVP invasions. Personally, I don’t find any of the Souls games really difficult. They’re relatively easy once you take the time to learn the mechanics, and the only difficulty one might face is in new areas with gimmicky qualities. One of my biggest complaints with the game, however, is in relation to late game enemies: instead of making them more difficult to beat or giving them some sort of new mechanic to learn, they just throw in old enemies that only hit harder. A personal example, during the Grand Archives, one of the late-ish game areas, these ninja midgets (that are prevalent throughout the game and are relatively easy to kill) have this insane ability to stun lock you and one shot you when you’re at full health, one of the only times that’s ever happened in the game to myself. Certain boss battles are also relatively gimmicky and, quite frankly, boring. Yhorm the Giant (one of the Lords of Cinder), can only be (reasonably) beaten with one weapon that you get during the boss fight, the Storm Ruler. The Ancient Wyvern, which is optional, can only be killed by going through the level and doing a jump attack at a certain point. High Lord Wolnir can only be killed by breaking his golden bracelets. Thankfully, there are few bosses that are like this, with the rest being relatively difficult but beatable with normal means.

Multiplayer, thankfully, is infinitely better than Bloodborne's was. From Software, it appears, took the given complaints to heart and have fixed a lot of issues people previously had with the net code and the way invasions worked. Thankfully From Software got rid of disgusting Soul Memory from Dark Souls 2 and has since reverted back to using Soul level along with weapon levels. You can find a Summon range calculator at the Fextalife wiki for more information on that. Dark Souls 3 includes multiple old covenants, such as the Warriors of Sunlight, the Blue Sentinels, or the Blades of the Darkmoon as well as some new ones like the Mound Makers, Watchdogs of Farron, or the Rosaria's Fingers. Each give various benefits, such as increasing the amount of players you can have in your world (the maximum being 6), to offering automatic invasions per certain conditions of the covenant. I haven't personally done much online interaction yet, however as I played I encountered a few player invaders and with each invasion I had a near flawless connection. There was, of course, a few bits of lag here or there, but it appears as if they added some improvements to their lag detection system, offering a slightly better system than Dark Souls 2 (which had the best PVP until now) had.