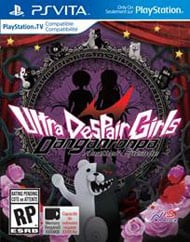 Despair awaits you in the latest heart pounding entry of the greatest franchise the Vita has to offer, Danganronpa. Upupu, let’s see if hope stood a chance in this review!

You fill the shoes of Komaru Naegi, the younger sister of the protagonist of Danganronpa 1, Makoto Naegi. Taking place in between the first game and the second you’ll find yourself smack in the middle of the biggest most awful most terrible tragedy in human history. A prisoner in a futuristic city, Danganronpa: Another Episode forces you to quickly adapt to the surroundings around you and take on an army of evil Monokuma robots being controlled by a group of sadistic, criminally insane children known as the, "Lil’ Ultimates".Along the way, you will meet new faces, and familiar ones, including your unlikely sidekick Toko Fukawa, AKA Genocide Jack. Together, it’s up to you to relieve this city of the despair of the Monokumas mercilessly murdering all of the adults in existence before it’s too late!

The plot of Danganronpa was incredibly engaging and I want to keep it as spoiler-free as possible. For anyone that adores the ever twisting conspiracies of the first and second game, rest assured that this entry continues to rattle your mind to the core with betrayal, loss, heartbreak and above all, despair.

Another Episode is very different from the previous two entries. Rather than the typical visual novel style with investigations and trials, this entry puts you in full control of Komaru in a third person perspective. Using a high-tech hacking gun with various truth bullet ammunitions, you battle your way through hordes of Monokumas, solve various puzzles and riddles and do a LOT of walking and exploring. That isn't to say that the visual novel aspects are gone, though. They are still pleasantly mixed in between cut-scenes and gameplay, and still do a fantastic job of engaging you in laughs and mystery.

Another Episode has various environments that you have to traverse through to meet your end goal of escaping this demented city. A lot of the environments tend to be very repetitive, considering it is one giant city, but don’t expect to see a lot of variety in the world you explore. You’re going to be constantly surrounded by desolate, broken city and greyed out factories and labs.

To go more in depth on combat, you have various types of Truth Bullets to choose from. Break is your most common bullet, and simply shoots Monokumas until they’re dead. Aiming with the hacking gun will sometimes cause some slight stuttering, and the movement speed while aiming down sights is incredibly slow. It takes Komaru at least 10 seconds to move the camera slightly to the right when aiming down the sights.

Other Truth Bullets include Paralyze, an electric attack that can hit multiple enemies at close proximity or in water. Move which allows you to interact with electronics in the environment. Link, a possessive ability that can control Monokumas, and plenty more. My favorite is Dance, which causes a Monokuma to stop in place and do a little jig, which can also distract other Monokumas. It’s adorable.

Using truth bullets is limited by ammunition, which can be picked up off of defeated enemies or found in Monobear vending machines. Rather than buying ammo though, you instead utilize the infinite ammo of the Move Truth Bullets to hack the machines, which output one random item. I never found myself struggling for ammo throughout the game, and I played it on the hardest difficulty, so you don’t have to fear too much about being out of ammo.

That isn't to say you should shoot all over the place either though. Well placed shots in enemy weak points can potentially have you one shot kill enemies and make them drop more valuable items, such as Monocoins. While you do not purchase ammo in this game, Monocoins can be used to purchase upgrades for the hacking gun, as well as upgrades for Genocide Jack’s scissors. And speaking of Jack…

Your other form of combat in this game is none other than the sadistic serial killer herself. You can have Toko turn into Genocider at will by pressing the triangle button, allowing her to shock herself into the mind of the crazy fiend.

When controlling Jack, gameplay turns into straight hack and slash. You can mash the square button like mad to slash hordes of enemies quickly and brutally. Filling up the FEVER gauge allows you to perform a single finisher if you have one letter filled, or a devastating finishing move if you have all letters spelled out, that can kill the entire horde in one go.

However, you can’t just stay in the form of Genocider for the whole game. Your use of Jack is limited by a battery gauge at the top of the screen. Once it depletes, you will be placed back in control of Komaru, and won’t be able to turn into Jack again until you find more batteries from enemies or in Monomachines. Both characters can hold their own in combat, and it offers nice variety to the gameplay.

Shooting Monokumas can get a little tiresome after a bit, so Another Episode also included numerous puzzle rooms within the game. Using a Monoku-man arcade machine, you can use surveillance cameras in the various puzzle rooms to determine ways to clear the room with various objectives. Some rooms require you to kill everything in one shot, others force you to sneak around with killing anything. It adds critical thinking to the game, which is what the franchise is really known for. The puzzles are never too difficult, I only found myself getting stuck once or twice. And if you really have issues, you can always retry the room or just blast your way through it at the risk of getting beat down by enemies.

Character Development and Other Elements

Outside of shooting sadistic robot bears, Another Episode does a great job of keeping the mystery aspect of the franchise by hiding various collectibles, having you solve riddles such as finding the combination to a safe by investigating clues around you, and offering the fantastic characterization the games are known for. The relationship that builds between Komaru, a timid schoolgirl with no confidence in her ability, and Toko Fukawa, the self-hating know-it-all, is one of the best character developments Danganronpa has offered yet. The trials and betrayals the two go through and the despair they suffer only makes them stronger and more likeable as the game goes on.

The antagonists of the game are no different. The Lil’ Ultimates are wonderfully portrayed as bratty children with twisted concepts of reality. The evil they emanate is enough to make your skin crawl, and your heart sink when you find out why they can be so cruel.

When you are finally faced with fighting one of the children, you will initiate a boss fight. Rather than putting them on trial like the other games though, you will instead be forced to fight gigantic robot mechs. It doesn’t make as much sense, but it sure is fun and satisfying. The boss fights do get relatively repetitive as the game goes on though. Every fight takes place in a similar colosseum, and every fight basically comes down to shooting blinking red lights to death. It’s not too innovative and new, but it works well.

The best part of Another Episode is its ability to stand as its own title. With small nods to the first and second games, Another Episode has enough of a self-contained story to be played without any knowledge of the other two games. That being said, anyone that has played the other entries will be delighted to see all of the extra facts and allusions the game offers to the cause of events in both games. Veterans will both laugh and tear up at the nods to characters in both titles, as well as learn the motives and causes of other events in the history.

The soundtrack of the game is still excellent as well. There are returning tunes as well as new songs that keep everything energized and flowing with personality. Danganronpa’s soundtrack has always been catchy and amazing, and Another Episode is no exception.

I will say this about Another Episode. It is probably the most messed up Danganronpa yet. The plot of kids murdering adults is already pretty crazy, but when you begin to learn the deeper stories of why these kids are so messed up, it will really unsettle you. Abuse, neglect, and hints of molestation are thrown around all over the place in this game, and Another Episode doesn't make light of it either. Your heart will sink at some of the stories and it really will get to you after some time.

The only other issues I faced were small framerate issues when too many enemies were on screen, and the aforementioned lagging camera during aiming segments.

But that doesn't make it any less engaging, or make it a reason to put the game down. In fact, it was hard for me to set it down at all!