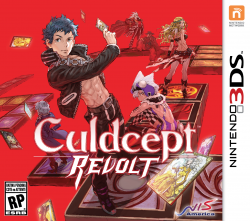 Celebrating 20 years since its initial release, is it all in the cards for Culdcept Revolt, or is this one a bust?

​
Culdcept Revolt is a card/board strategy game, quite similar to Magic The Gathering and Monopoly. Originally released in Japan in 1997, Revolt celebrates the 20th year since the first game's release on the Sega Saturn. It wouldn't be until 2002 that Culdcept hit the West with Culdcept II, which was simply titled Culdcept on the PlayStation 2. It has since been released on Dreamcast, Xbox 360, Nintendo DS, PS3 and PSP. It has however been quite sometime since the last Western release, with Culdcept Saga for the Xbox 360 in 2008. How is the card-meets-board game 20 years later?


The World of Culdcept
In Culdcept Revolt, you assume the role of a Cepter, a person with magical powers that can bring to life cards from decks you create called Books. There are various game modes but most are locked until you reach certain points in the Quest mode of the game. In Quest mode, you are a Cepter with no memory of who you are, apart from your name, let alone your abilities as a Cepter. This serves as an introduction to the core mechanics of the game. After the tutorial quests, you are presented with the story for the game.
The Count has locked the city gates and is wiping out all of the Cepters that remain within. Found by the Free Bats, a rebel group intent on fleeing the city and finding freedom outside its gates, you join them and hope to uncover your own past. The story itself is relatively simple, but does have its twists and turns. NPCs in the game are a tad flat but do grow on you a bit as you play. Matches for single player are broken into chapters and then further broken down into main matches, which progress the story, and side matches, usually involving the opponent you just battled with a twist of some sort. It's presented quite well with you moving your character from space to space in each chapter. You can also go back and replay any match you have already completed. Quest mode is decent in length, took me about 13 hours to finish, with quite a few losses I must add.

Other game modes unlocked as you get further into the Quest mode are Solo Match, Local Match and Online. In Solo Match, you battle against AI controlled Cepters and can set various game rules, from turn limits to the Magic Goal to win the match (which we will get into shortly). Cepters you can battle are from the Quest mode and are, again, unlocked as you defeat them in the story. Solo Match is a good way to test new decks and strategies you come up with before using them in the Quest mode or in competitive matches against other players. Local Match and Online are much like Solo Match. You can create or join a lobby and play with up to 3 other people. The host sets all the rules for the match, similarly to Solo and can even include AI players as well. There is an Alliance rule, in which four players are divided into teams of two, sharing Gain, Chains and lands. You can interact with your teammate's lands and vice versa, adding even more strategy and depth to the game. 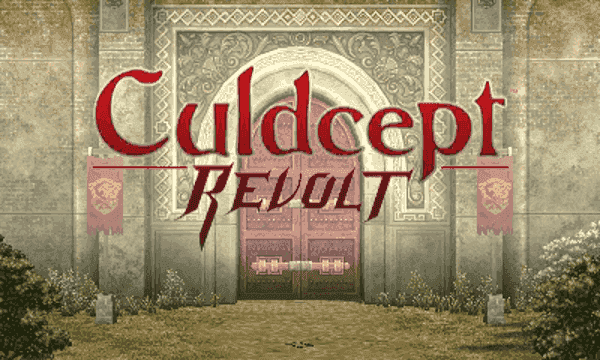 ​
All in the Cards
The core of Culdcept Revolt is its gameplay. Matches are played with 2-4 players. At the beginning, all players start at the same Gate. Some boards have one, whereas another might have 3 or more. As you pass through each Gate and once you complete a "lap" by going through all of the Gates, you get a Gain bonus. Gain is the magic used to summon creatures, use spell/item cards and is what you need in order to win that match. Each match has a Magic Goal that you and your opponents are trying to reach. Once you reach that goal and pass a Gate, the game is over. Apart from passing Gates, there are other ways to increase your Gain.
The main way is claiming various lands across the board. They come in four colors; red, blue, green and yellow. Each represent one of the 4 elements; Fire, water, earth and air, respectively. To claim a land you must summon a creature from your hand. If an opponent stops on a land you control, they must either pay the Gain toll or battle your creature to take that land. The value of your land is added to your total Gain and increases as you control more of a color. This is called Chaining and is a key part of the game. Chaining increases not only the value but the toll of the territories you own of that color. And like Monopoly, you can increase the toll and value by upgrading your lands.

Unlike Monopoly, however, if you take or lose a land, all upgrades remain, which can really change things up very quickly. You can also move your creatures on the board to a space to claim that territory or to attack an opposing player. In battle, the attacking creature strikes first and the defending creature attacks afterwards if it survives the battle. Its a lot to take in and the game does a fair job teaching you most of the mechanics but some of them you have to learn as you play, which can become a bit frustrating at times. There is also a cursor that shows you the best move you can make at the time, but even this has a few flaws as sometimes listening to it messed me up more than if I had just done as I had thought myself.

Boards come in many different shapes. Some are just squares or a line. Others are shaped like a figure 8 or yin-yang. Additionally, boards sometimes include other types of spaces. Spell Circles allow the player to land on it and grants the use of one of two spell cards at no charge to your Gain. Others include lands with all 4 elements, a warp space and bridges that connect other parts of the board. Each board requires different strategies and approaches, keeping the matches pretty interesting and engaging.

Once you reach a certain point in the Quest mode, you unlock the Shop. The Shop is where you purchase booster packs of cards to expand your collection to create new more powerful Books. By progressing further through the Quest mode unlocks even more boosters and expansions. And there are a lot of cards available. Packs are purchased using GP, the currency used by Cepters. You acquire it by selling extra cards but the main source comes from playing matches. In Quest, the GP you can win is displayed and is at a set amount. The other game modes are a bit more variable. Losses and forfeits still net you GP, but to a lesser extent. 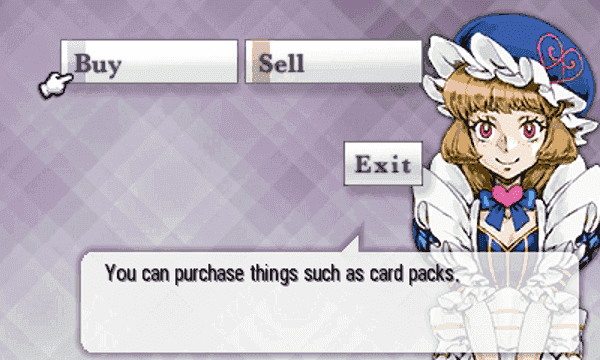 ​
There are 3 different types of cards which you can build your Books out of; Creature, Spell and Item. Creature cards are further divided into 5 elements. The four previously stated fire, water, earth and air. The fifth is Neutral. When a creature is placed on a land that matches its element, it receives an HP boost. As you upgrade that land, the HP boost increases. Neutral creatures do not receive any elemental boosts.
Creature cards have a set cost to summon, strength stat (ST) and HP. Some have various abilities, like Neutralizing an attack from a creature of a specific element, Attacking First, Penetrating damage that ignores land HP boosts and Critical Hits. There are many other abilities which really adds a very welcome layer of depth to deck creation.

Spell and Item cards are support cards. Spells are used at the start of your turn, after you draw from your book. Some can assist with movement across the board, deal damage, grant buffs or debuffs to creatures on the board, or just help increase Gain. Item cards are used in battles between two creatures. They generally add to ST or HP but some have abilities like those of creature cards; From swords and armor to magic scrolls that deal damage ignoring land HP boosts.

Books are 50 card decks that Cepters use in matches. And Book customization is wonderful in Culdcept Revolt. You can create up to fifty different books, name them and change the cover of it to match a theme or just to tell them apart. Once in the editor, the top screen displays sections for all the creature cards divided by element, all creature cards, Item cards, Spell cards, all cards and new cards. It tells you how many cards you currently have in your Book and you can sort cards by rarity, number owned and cost, to name a few. You can also view cards from a specific set you unlocked, which is helpful if you have many cards to go through. The bottom screen displays stats about your Book; Number of creature cards, Spell and Item cards, number of cards based on rarity and so on. It also shows information on the card you currently have selected. Once you have finished your Book, you can save it and give it a try.
I really enjoyed building new decks and coming up with new strategies, it reminded me of when I used to play Yu-Gi-Oh and other card games. 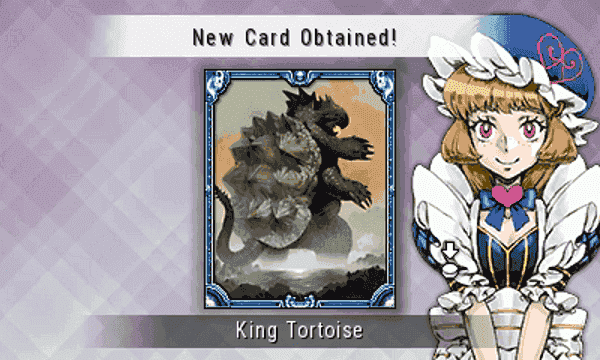 ​
Views and Tunes
Graphically, Culdcept Revolt doesn't do anything groundbreaking. That said, it is a very good looking 3DS game. Using isometric 3D environments and 2D sprites, it looks very polished. The scenery around the boards are nicely detailed and add a certain feel to them. The portraits for all the cards are fantastic. With many different illustrators there is a lot of variety in the art and it's all wonderful. Playing with the 3D was enjoyable as well. The highest setting wasn't too hard on my eyes and really gives the game a good pop. The boards truly look like they are just floating above the scenery and the cards almost jump out at you. The lowest setting is to a lesser extent but still gives it a good 3D effect.
I have to mention the music of the game as well. I was pretty impressed with the quality and feel of the music used in Culdcept Revolt. The themes for the boards generally matches the scenery or mood for the match and the battle themes are some of the best I've heard. Definitely helps to keep the player engaged throughout.

Fans of strategy games and card/board games will feel right at home. If you are new to the genre, after the first few matches and the tutorial quests, you should have a decent understanding of the game. Like most things, it just takes time. And Culdcept Revolt is a game that the more time you can put in, the better you will understand it. I highly recommend checking it out if you're a fan of the genre, card games like Magic and Yu-Gi-Oh, or are just looking for something a bit different on your 3DS.