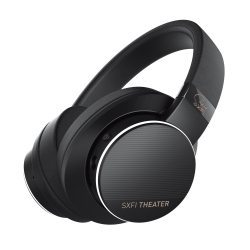 Featuring Creative's toted Super X-Fi audio, does the SXFI Theater do enough to jusfify its price in this highly competitive market?

When it comes to audio, I feel no shame in saying I'm not an expert. I'm a person who appreciates music and audio as a whole to the extent of it sounding as it should. I've gone through speakers, earphones, earbuds, headsets, all ranging from low-end to midrange. Creative's SXFI Theater is the first I've owned of what I would consider to be a high end audio-centric headset, and it does not disappoint. 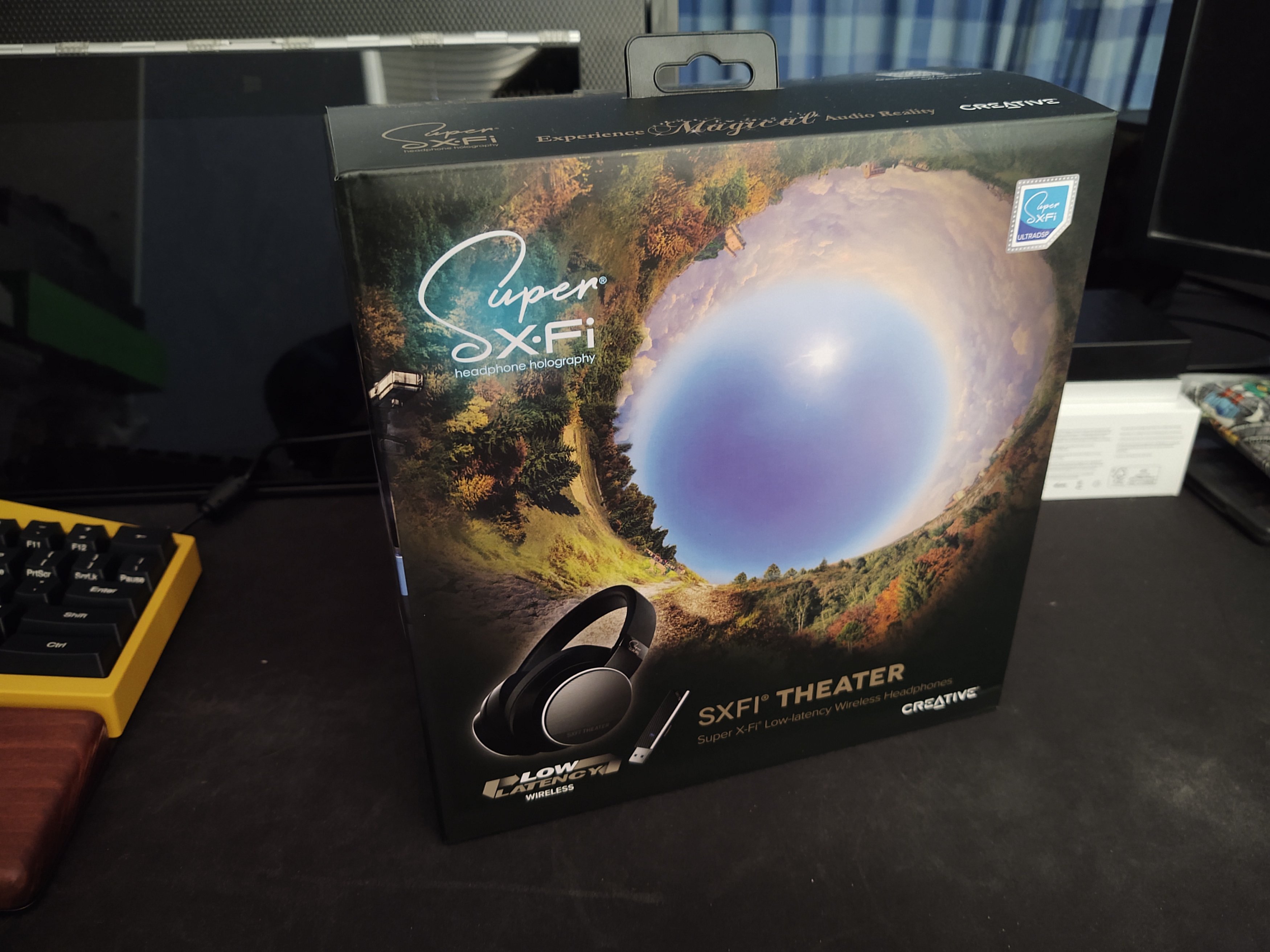 The box is fairly unassuming—matte black with a pretty image taking centre stage and the headset tucked away in the corner. It's odd to me they don't want to show it off, but that's branding for you. It's made to catch your eye and I suppose it does just that. Inside, you can find the headset itself with its 2.4 GHz wireless dongle, as well as a few choice goodies to get you off to a good start. Namely, a USB-C to USB-A charging cable, a 3.5mm cable for wired connections, and a handy USB extension cable if you don't like having dongles hanging from your PC in the way of harm. It's everything you need in one package, which is a nice change with choice items being designated as optional in many a modern day product. The headset itself has a suitably premium feel to it, Creative happy to draw attention to the soft protein leather used in the ear cups. One thing I appreciate in its design more than I perhaps should is the large and clearly printed L and R on the inside of each cup. Though you can distinguish between the cups by the buttons on the left, and subsequent lack of buttons on the right, it has helped my tired mind on more than one occasion. It's worth adding the headset also comes with a detachable microphone for devices supporting it. It fits securely in the left cup and does the job as well as you'd expect from a headset of this calibre. I'm fond of its detachable nature, it being completely out of the way when not in use, but I do fear I'll lose it. 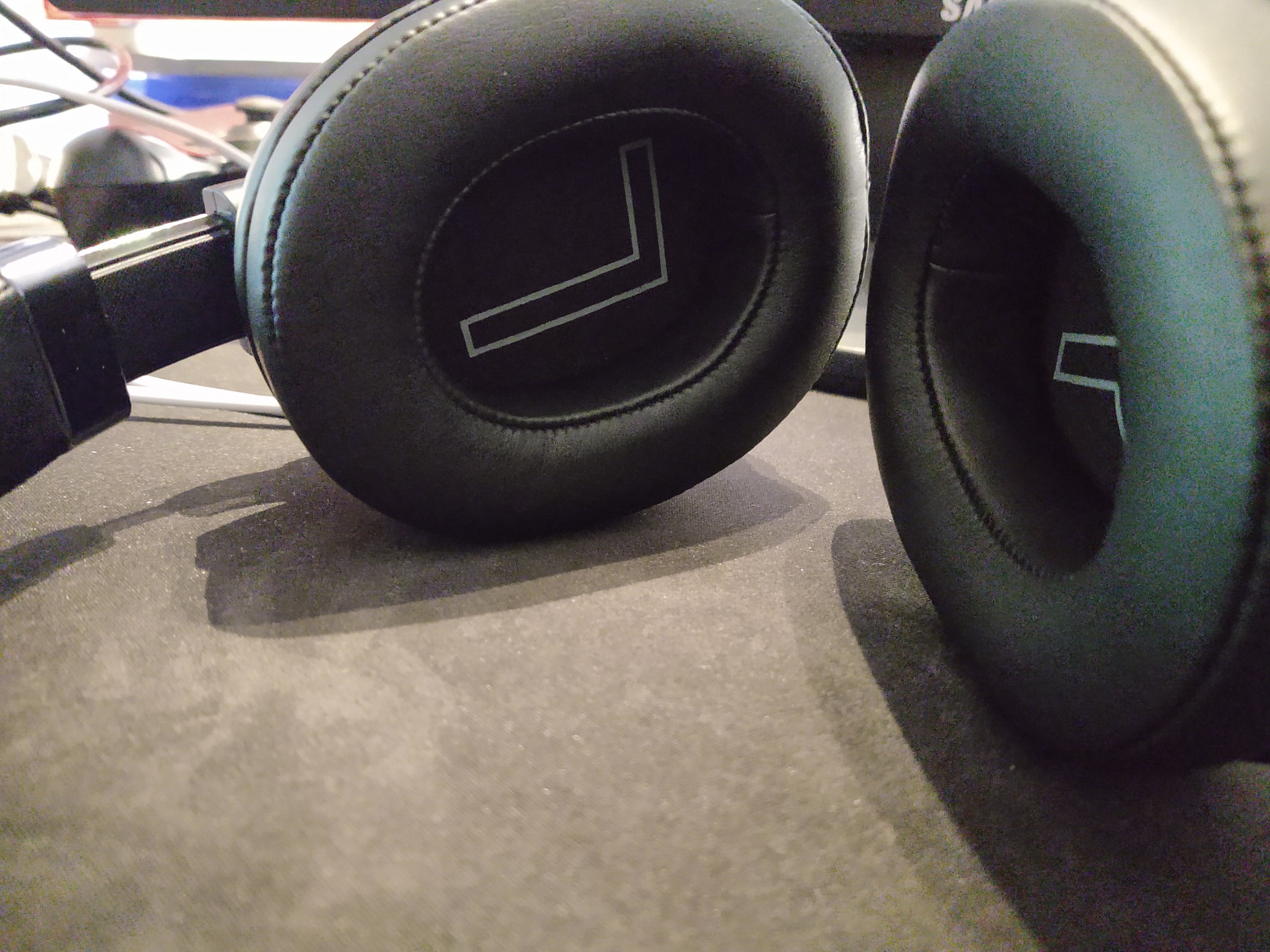 Designed to be worn for long periods of time, the headset sports a solid 30 hour battery life between charges. Competitors in its price range advertise usage times of around 20 to 25 hours, so while it's maybe not as impressive as it first sounds, it does appear to be the king in this department, if only by a few hours. Having tested this myself, I can certainly say it's impressive, having not charged them in over a week of fairly regular usage. I can't vouch for the 30 hour benchmark specifically, but I can say I'm very happy all the same.

Integral to prolonged usage more so than the battery life is the comfort of the headset itself, and I find myself mixed here. I can't fault the cups themselves, as Creative so rightfully boasted, they're delightful to the ear and surrounding regions. Where I feel they slightly neglected however is the band that sits atop your head. With SteelSeries' Arctis 7, they had an elasticated band to relieve the weight ever so slightly, and it worked well for me. The SXFI Theater don't really have… Anything? There's a thin layer of padding, but I do find myself adjusting the headset in extended sessions. Weighing around 350g, it's the kind of thing that isn't really noticeable until you feel a slight ache, and tolerance to this kind of thing does vary from person to person. With my minor adjustments, I could continue to use them well enough. The smart advice would be to take a break every so often, but it shouldn't be a requirement to enjoy a product to the fullest. 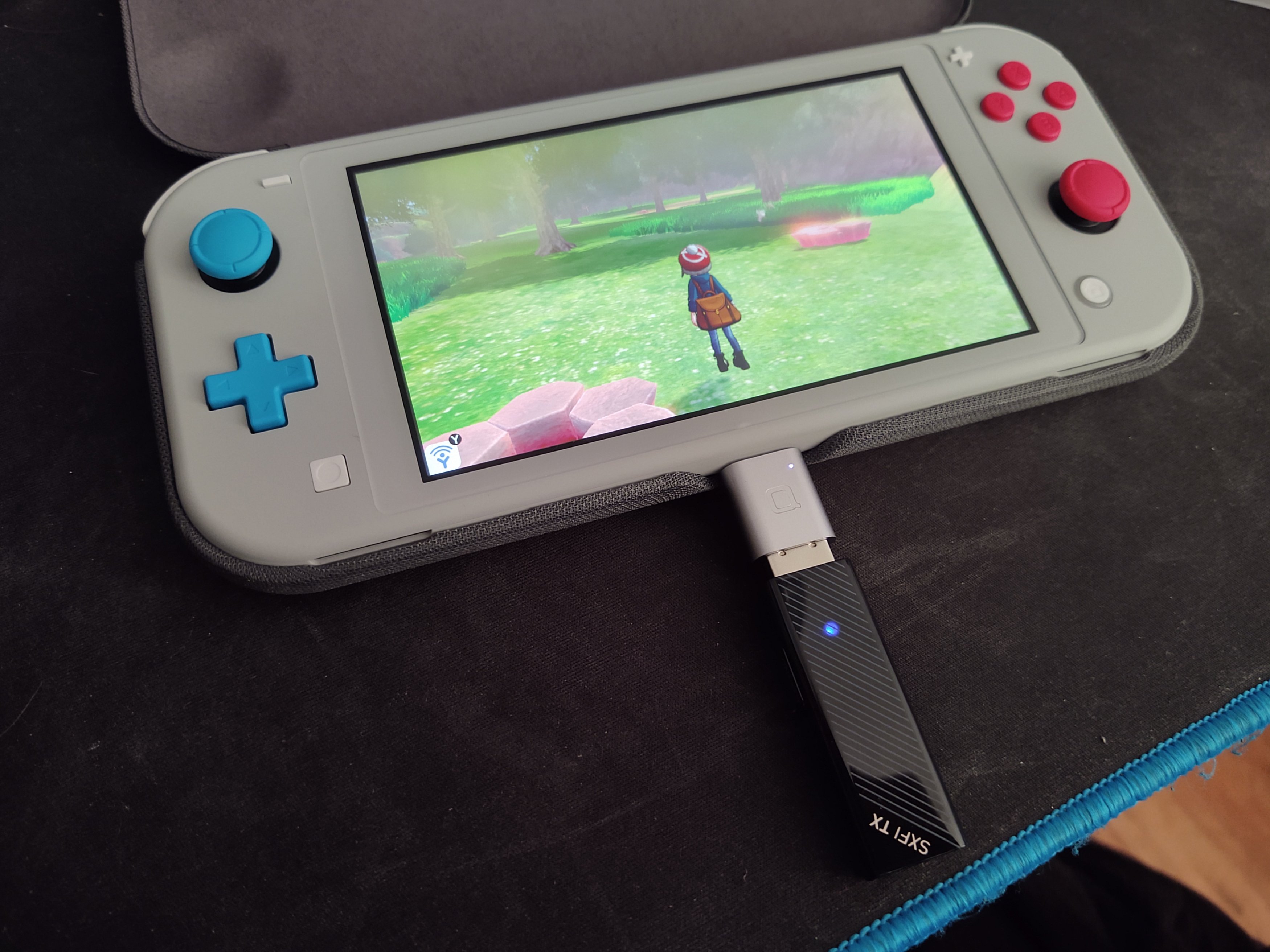 Sure it looks weird, but it works!

When it comes to the audio quality itself, you have two benchmarks to look at, the first of these simply using it out of the box. It's hard to put into words my first experience. Curiosity drove me to plug the dongle into a USB-C convertor, and in turn into my Switch Lite, and I experienced Pokemon Sword in a completely new light. The environments felt alive. I could hear the Wooloo in the background of the Wild Area, the intricacies I had let slip me by. It added a depth beyond what sounds right; it sounds extraordinary. And this is just out of the box, it goes beyond this.

Where the SXFI Theater are particularly interesting is in their ability to customise the audio to a profile of your ears and facial structure. The mere idea of this is bizarre to me, and in all honesty, I let this feature pass me by for the longest time. Having this headset for just over two weeks, only a few days ago did I decide it was time to try the gimmick for the sake of the review. After all, I had little in the way of negatives from my few weeks of use. As somebody who's always just wanted audio sounding the way it should, it comes across as meaningless niceties; smoke and mirrors to get people barely curious enough to give it a shot. Much to my surprise, it isn't.

What Creative are calling Super X-Fi really did impress me in ways I couldn't have imagined. The headset already exposed me to sounds and intricacies I never knew were there and pushed an appreciation for even the most idle of background tracks in the Switch games I'm currently getting through, but this is something beyond. It gives the sound an unexpected depth that I can only really describe as three dimensional. Toggling the setting with the button on the left ear cup really hammers home how much of a difference this makes. Voices and instruments alike sound as though they're bouncing from wall to wall around me, putting me right in the scene regardless of whether I'm listening to a shanty, watching a film, or deep in a game. It's the first time I've ever really found myself appreciating bass. It doesn't drown anything out, providing a powerful sensation that drives home this sense of immersion I'm just not used to.

The companion app also serves as a music player!

Though I wouldn't necessarily call it a negative, I did find the process of acquiring this personalised audio a little strange. You first download an app on your Android or iOS device and snap a few pictures of your ears. I'd recommend calling in a friend for this, I found it incredibly difficult doing it alone (and ultimately gave up and grabbed a local family member). After this, to transfer the magical configurations, you first plug the USB dongle into a PC. After that, you pair the headset to the dongle, then pair the dongle to your phone via Bluetooth. For some reason, this pairing requires location services to be enabled, though I assume that's more a quirk of Android than it is Creative's app design. Once you have that chain of connections sorted, it'll transfer without issue and you're set! I struggled a little more than I care to admit, forgetting the dongle had a sync button that needed to be pressed, but rereading the included "READ ME FIRST" leaflet stowed away safely in the SXFI Theater's box set me back on track. 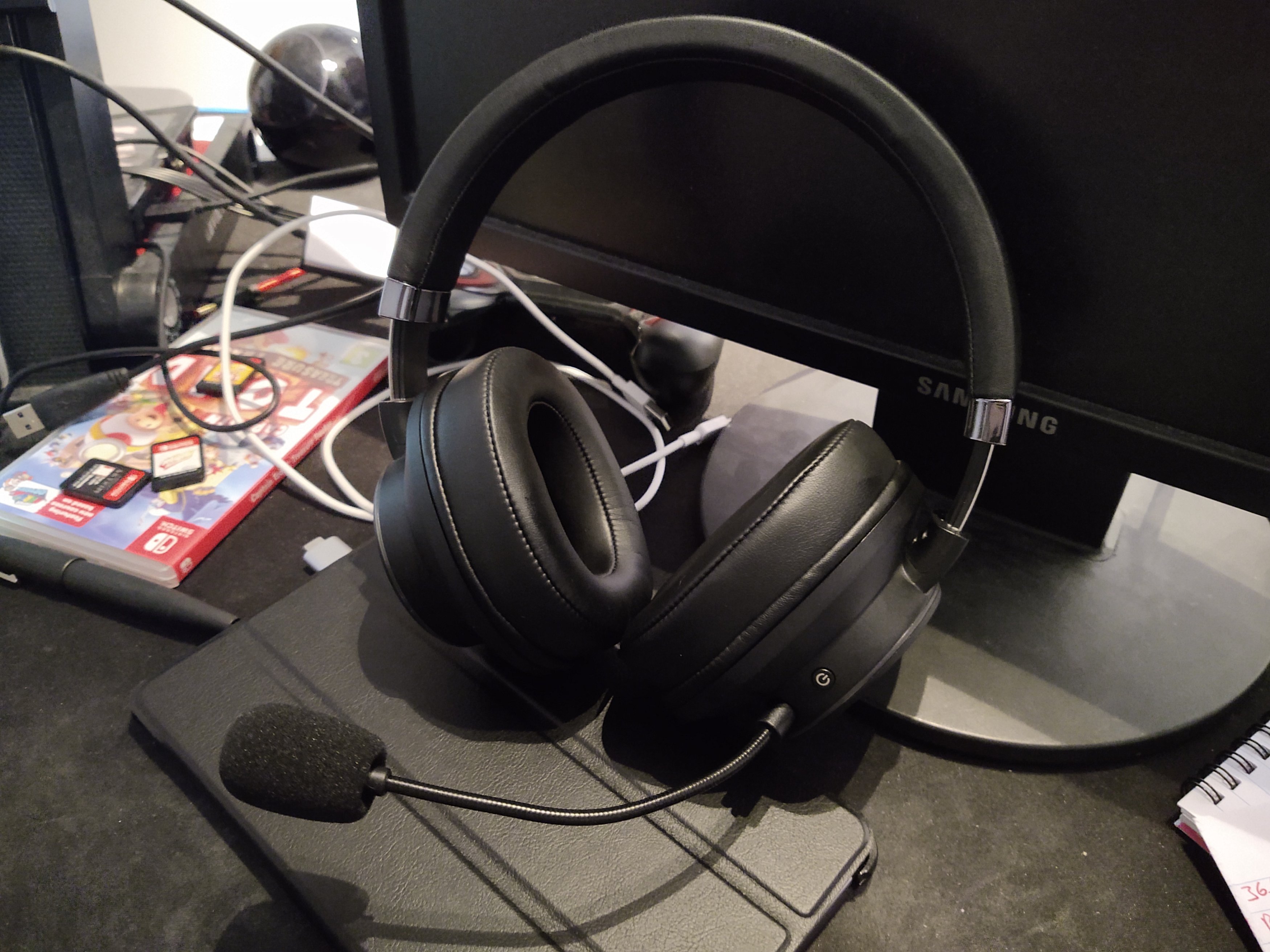 The headset in its full glory, mic and all!

Compatibility is a large positive for this product. Advertising itself as an all-rounder of headsets for films, music, and games, it needs to be easy to use, and more importantly, easy to use on different devices. Advertised you have wireless support for PC, Mac, PS4, and as previously touched on, Nintendo Switch. Naturally it's the latter that has me most excited, but transitioning between device is as simple as plugging the dongle into an available port. With the device being synced to the dongle in oppose to the device itself, it works straight away with no additional software or drivers required outside of the companion mobile app for Super X-Fi setup. It's also worth noting that they worked with my Android tablet by plugging in the dongle, but it's not the kind of thing that's feasible for something like a phone. For things like this, you have the included 3.5mm cable, something I probably should have used with the Switch Lite instead of my own funky setup. Though it does work fine, it's worth noting Super X-Fi isn't available, nor the on-ear volume rocker. It's a case of using the wireless dongle where available and having a wired connection there for broader connectivity.

In my time as a writer for GBAtemp, no product has better justified its premium price point as the Creative SXFI Theater have. Where other low latency headsets I've used have put forward audio that sounds perfect to what I remember it should, these go beyond. From the clicks the Switch menu makes to elaborate title screen melodies, films, music, it hits every note to an exceptional and engrossing degree. These are headphones for gamers, streamers, audiophiles, film fanatics; they're an all-round treat for anybody fortunate enough to experience them. If you're in the market for some new headphones, I urge you to consider these. At £190, they're worth waiting for, and they're more than worth saving for.

Creative's SXFI Theater are hands down my finest audio experience to date. Though I perhaps lack the insight and expertise of an audiophile, they have gripped and immersed me in a way I didn't know possible. Whether for music, films, videos, or games, they excel in each area for a fantastic all-around headset I can recommend to anybody.
Reactions: Silent_Gunner
Share:
Facebook Twitter Reddit Pinterest Tumblr WhatsApp Email Share Link
While I'm sure these are nice, it still isn't going to be running circles around my Sennheiser HD650 if these are only above $150!
Reactions: Scarlet
Man that dongle sticking out like that looks accident-prone. I can just see it catching on something and bending the fudge out of the charge port!

"No Super X-Fi available for wired connections"
Thats just weird. you would think this would work both wireless and not.
I assume the "soundcard" is in the USB transmitter, thats why if you need to use it wired, you dont get the soundcard mixing your audio.

Great review nonetheless. I will be sticking to my cheapy earbuds, sounds fine+I dont care about my nintendo-friends(0) enough to throw $ at a "decent" mic experience.

P.S.: The 8-ball is not an accurate decision maker ;D
Reactions: Scarlet