At first glance, the Creative SXFI AIR does not stand out as a particularly fancy pair of headphones. Sure, the build quality is there to prove that it is a sturdy peripheral but there is no obnoxious design feature that will make you think twice before using it in public. In my books, this minimalist approach checks well. This is more so, given the fact that these Bluetooth headphones pack quite the innovative tech.

On the left ear-cup, you can control the volume, play/pause and skip tracks with swipes and double taps thanks to the touch sensor. The latter is quite responsive, as compared to the Soundcore Liberty Air, and is a welcome feature to have rather than fiddle with the controls of the music source. On that front too, the SXFI AIR can be independent as it packs a microSD slot, turning it into a standalone MP3 player supporting MP3, WMA, WAV, and FLAC formats which you can listen to for a decent 10 hours or so. It's a slick feature that's personally very enticing as this headset gives me the option to not having to rely on another source for my audio needs which would also drain its battery. However, the standout high-tech feature is the Super X-Fi technology that offers the “holographic audio” experience, but we’ll get to that in a bit. 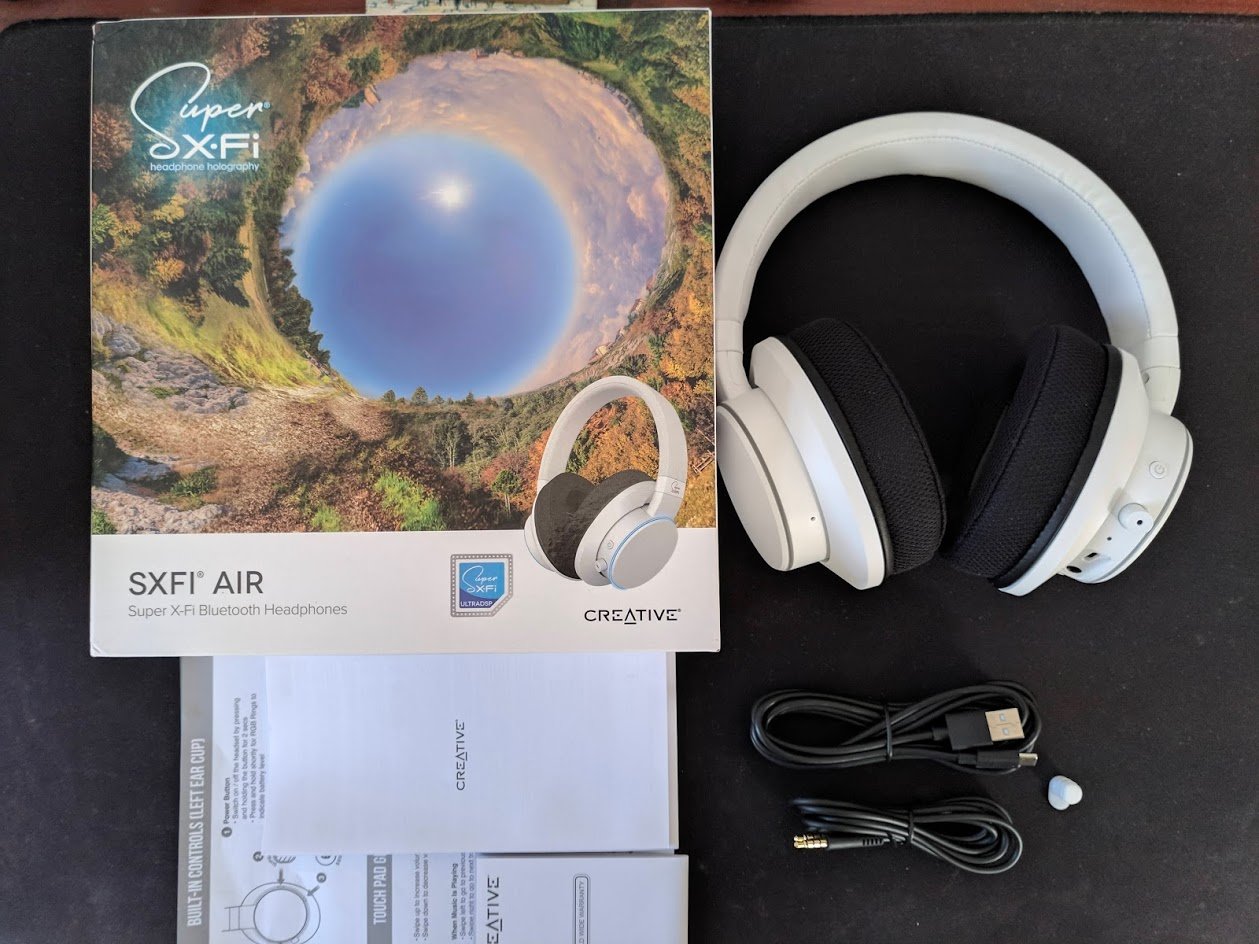 While putting the SXFI AIR on, my first reaction was that of surprise considering how comfortable they are. The memory foam-cushioned ear-cups offer quality comfort, without pressing on the ears, and even offer slight rotation to find the best fit for your ears. The headband is also adjustable, even if I found them to be rather loose. I easily wear them for hours on without any noticeable discomfort whether it’s for listening to music, watching a video or playing games. If I’m absorbed in what I’m doing while wearing them (such as when writing this review), I often forget that I’m actually wearing headphones at all, despite being on the heavier side at 338g. This is not only thanks to its stellar comfort but largely in part to its audio. 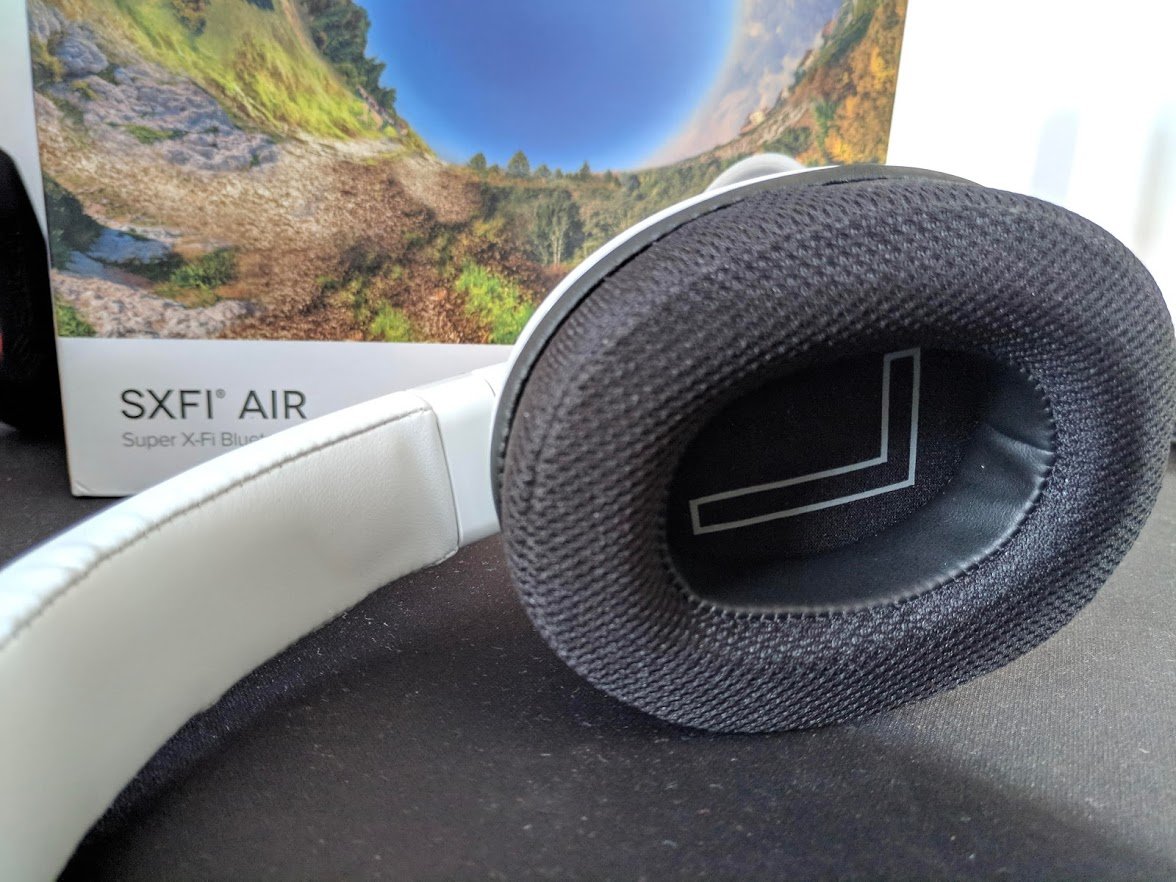 Toggling the Super X-FI feature on the SXFI AIR really gives a unique audio quality. It feels as if you are in a studio with the sound coming from around you, in a clear and crisp fashion, without any disturbances from the environment. The latter aspect is thanks to its ear cups that isolate most ambient sound, while the former aspect is exactly what the Super X-FI feature aims to emulate.

Rather than have speakers glued to your ears, the Super X-FI technology emulates an audio experience as if you are hearing from speakers around you. It’s not as if the volume is coming from a distance, it’s more about the audio feeling more natural, hence leading to me often forgetting that I’m even wearing headphones in the first place. 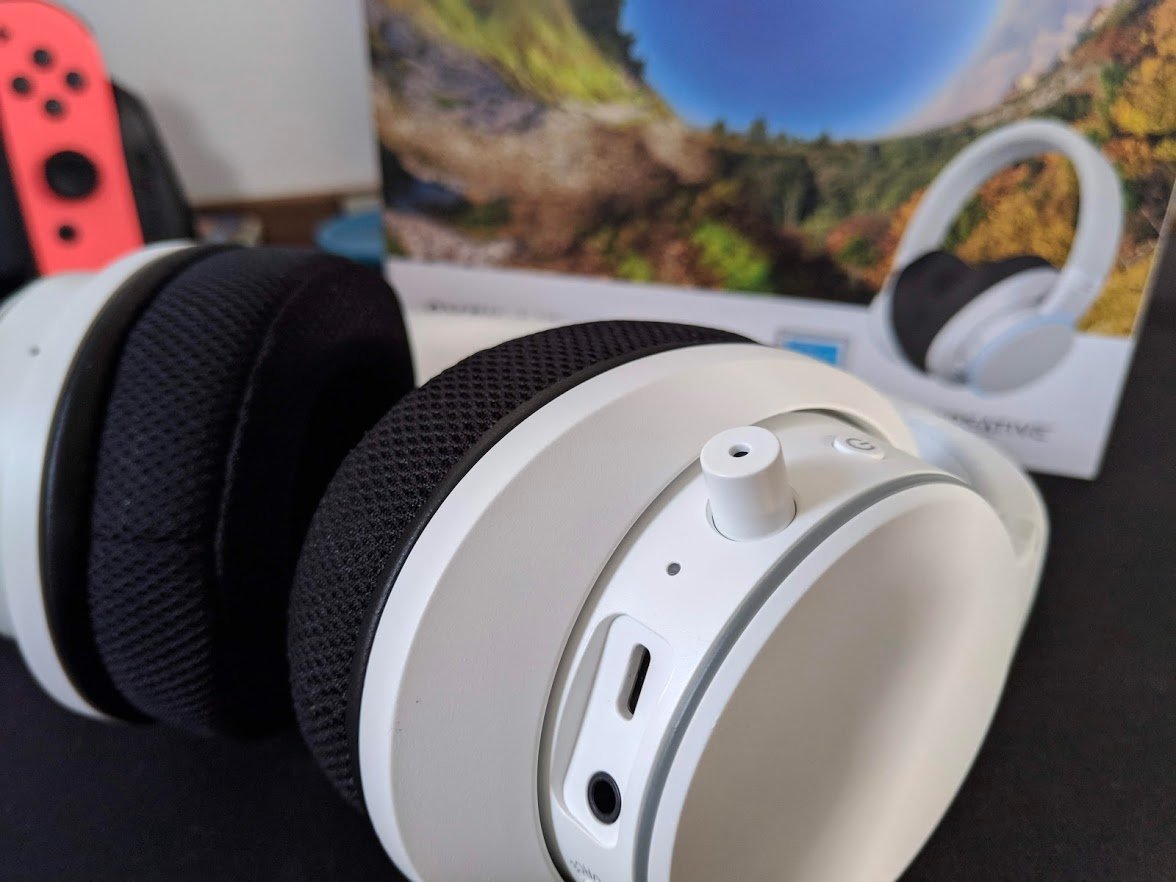 The feature translates well across games, music and videos. Shots in Disintegration and zombie growls in Resident Evil 3 give a cinematic, almost live experience. Tunes from my Spotify playlists feel like I’m up close in a private concert, giving a cosy and often surreal feeling, which replicates in YouTube videos and movies.

Moreover, this standout feature is personalized to each user. For its initial setup, you will have to take pictures of your ears and face that will allow the app’s algorithm and “UltraDSP” chip to adjust the experience to your anatomy. Even if this feature sounds like an elaborate gimmick, it’s really an experience you have to witness first-hand to attest to and is one that I highly recommend.

However, the stark difference that this flagship Super X-FI tech offers compared to without using it is mostly apparent in USB mode. In Bluetooth, the audio output is still top notch but the difference is less pronounced when toggling the Super X-FI button. Additionally, without the holographic audio, the audio via Bluetooth is more modest. That’s due to the use of the standard SBC codec instead of AptX which would offer a higher quality output. That said, the sound quality is still respectable for general use in Bluetooth mode.

Moreover, even if the SXFI AIR is a wireless Bluetooth peripheral, it does come with a detachable 3.5mm jack in case you run out of batteries. This feature is a really nice-to-have one and a huge selling point personally. But here again Creative made some concessions as with a headphone jack connection, I couldn’t activate the S-XFI effect nor the touch controls, even if the audio is still crisp and of high fidelity. 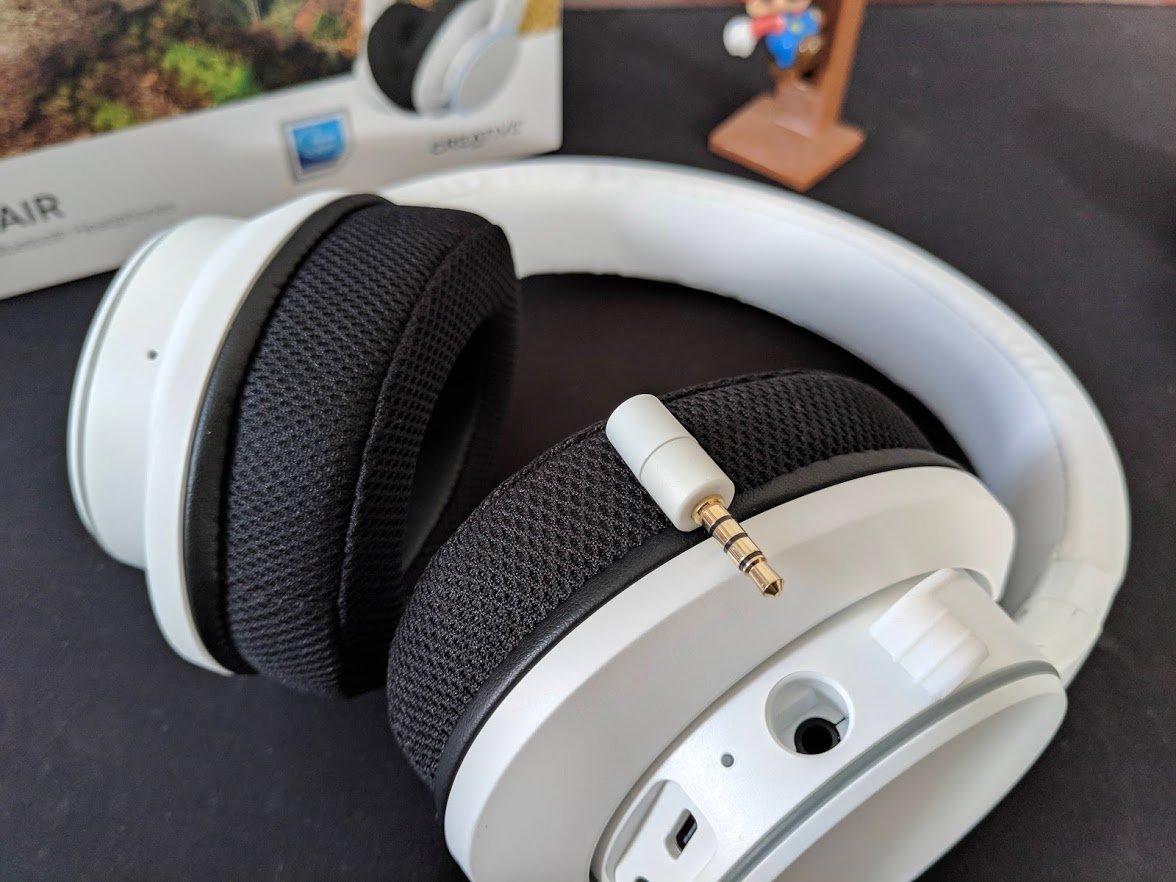 While the audio is clearly the focus with the SXFI AIR, the Creative team did pay some attention to other details. For one, the headset features a detachable NanoBoom microphone, with an included plug for its jack. While it is a small one, it does offer clear audio for general purposes. Since it is detachable, you can replace it with a higher-end gaming mic should you prefer. Additionally, even if you can remove the mic, I found it to give the headset quite a unique, futuristic, look and does not bother me the slightest.

Oh, and Creative was generous enough to include a fully-customizable RGB ring around each ear-cups to personalize to your liking. If that's too game-y for you, you can always switch it off with the companion app, but I'm having mindless fun with the color wheel and changing the lights every day.

I do deplore the lack of a carry case as the SXFI AIR were clearly meant to be portable; and I would appreciate carrying it more in my backpack rather than around my neck while not in use.

Nevertheless, at $159.99, the Creative SXFI AIR is well worth the cost considering the versatility and unique SXFI audio experience it offers. However, the latter is only best experienced when plugged via USB but I hope this gets improved with future firmware upgrades as Creative have been rolling out. Nevertheless, if you’re looking for a new pair of headphones with some unique features, you can’t go wrong with the SXFI AIR. It did offer an audio experience that I haven't had before and is one that I can recommend to anyone, 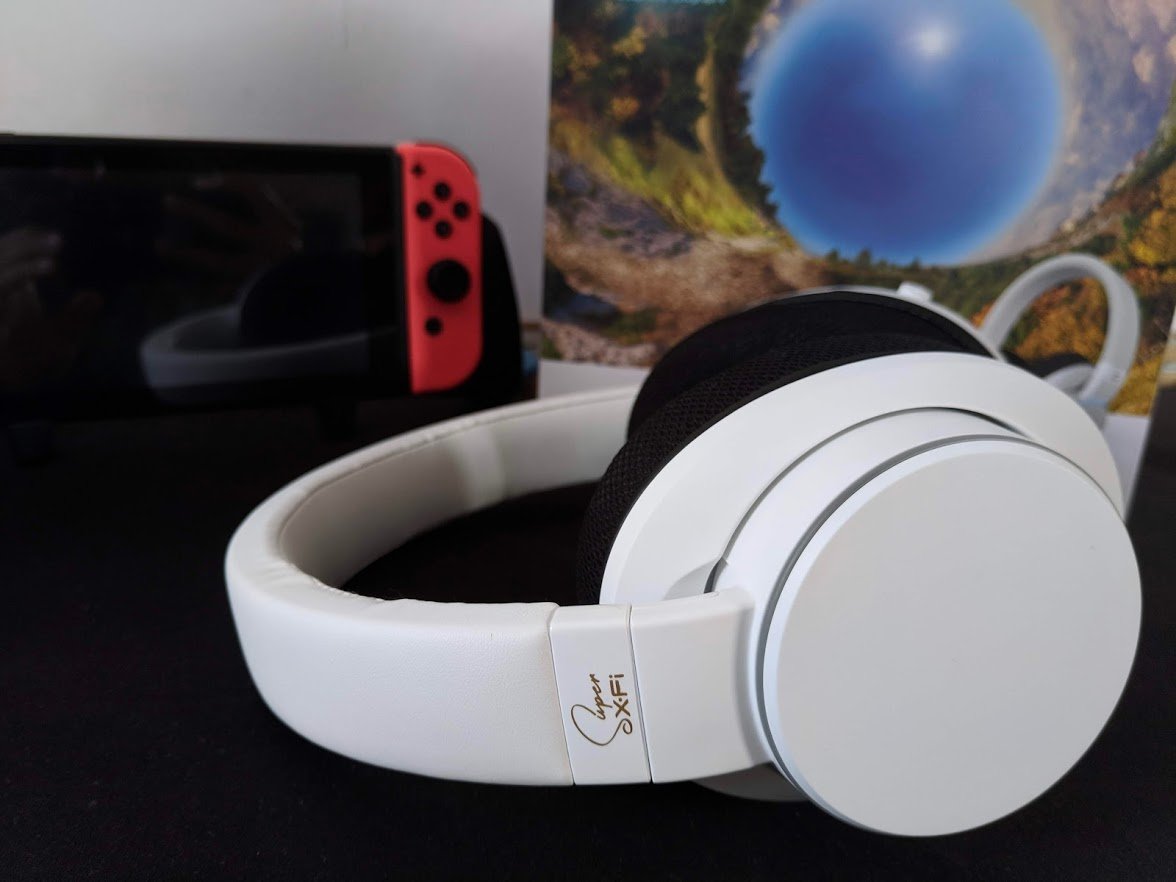 BTW, this headset color would go well with the PS5! If only the PS5 was as holographic as people were imagining it would be for the past 10 years...
Reactions: Prans
Does the sd card have to be set up any certain way or can you still organize the files through folders
Reactions: Silent_Gunner
I'm not the biggest fan of AptX (it doesn't have any artifacts, but tends to lack spacial depth), but at least supporting AAC would have been something.