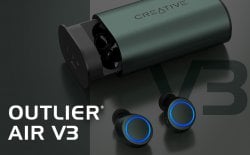 Editorial Team
Thursday at 12:41 AM

Yet another true wireless earbuds is up for review. Does the Outlier Air V3 from Creative do things any differently?

When it comes to audio peripherals, Creative has generally left a lasting impression whether it’s a soundbar like the BlasterX Katana or a wireless headset with fancy audio tech like the SXFI Air. They deliver both on the hardware and audio output to make for recommended peripherals. However, until now I didn’t get to test their earbuds; and that’s where it can get tricky. For instance, they can pack great audio but lack features like the EPOS GTW 270 Hybrid. So with the opportunity to test the Creative Outlier Air V3, I was curious to see whether the company that usually delivers solid products will do so with its take on true wireless earbuds.

Coming in at $70, the box contents are as follows: 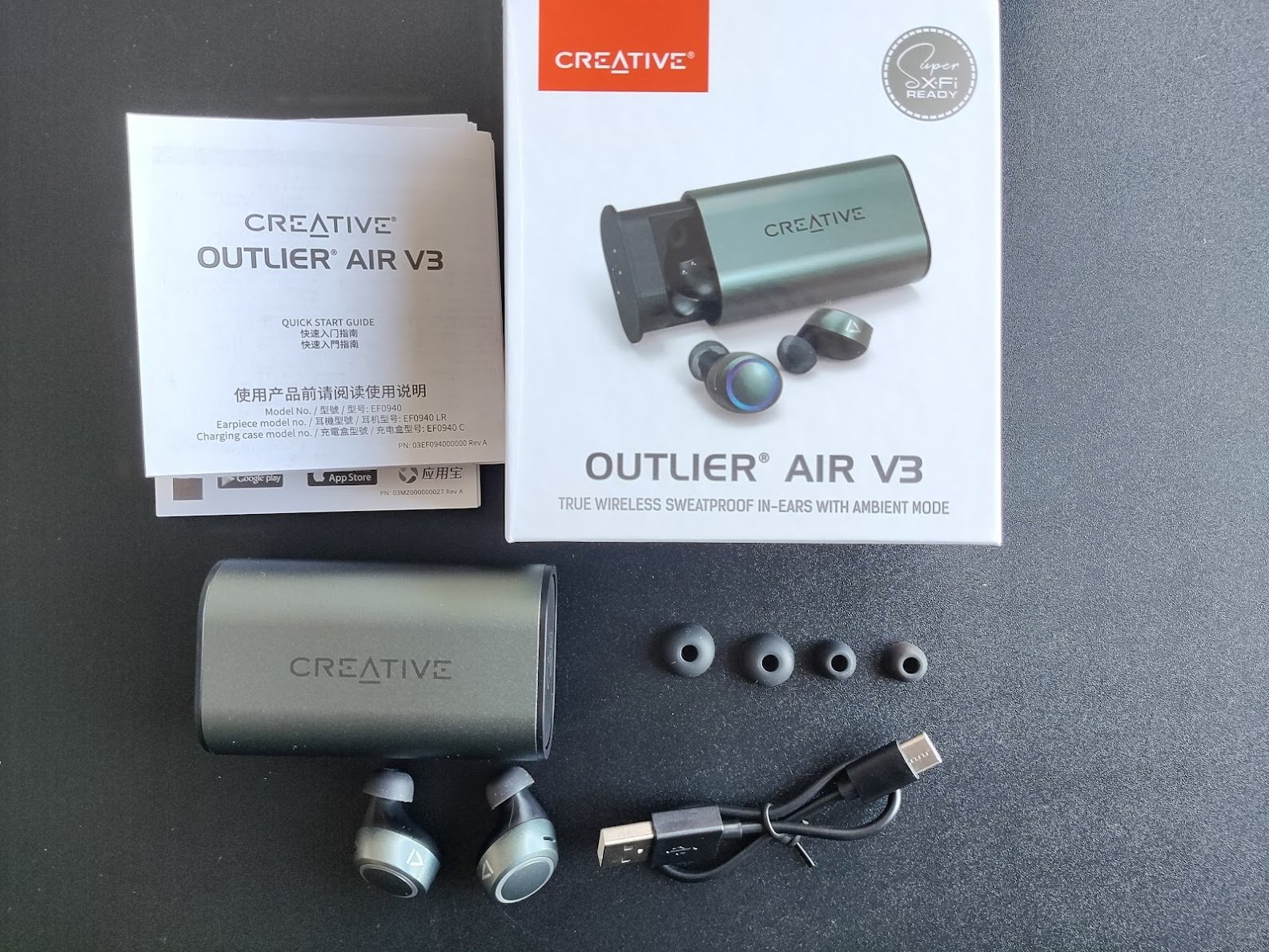 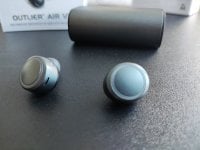 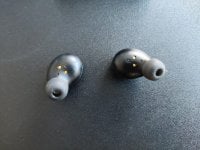 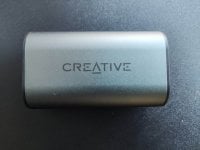 Given its V3 suffix, this model has newer tech and you can find more about the specs below: 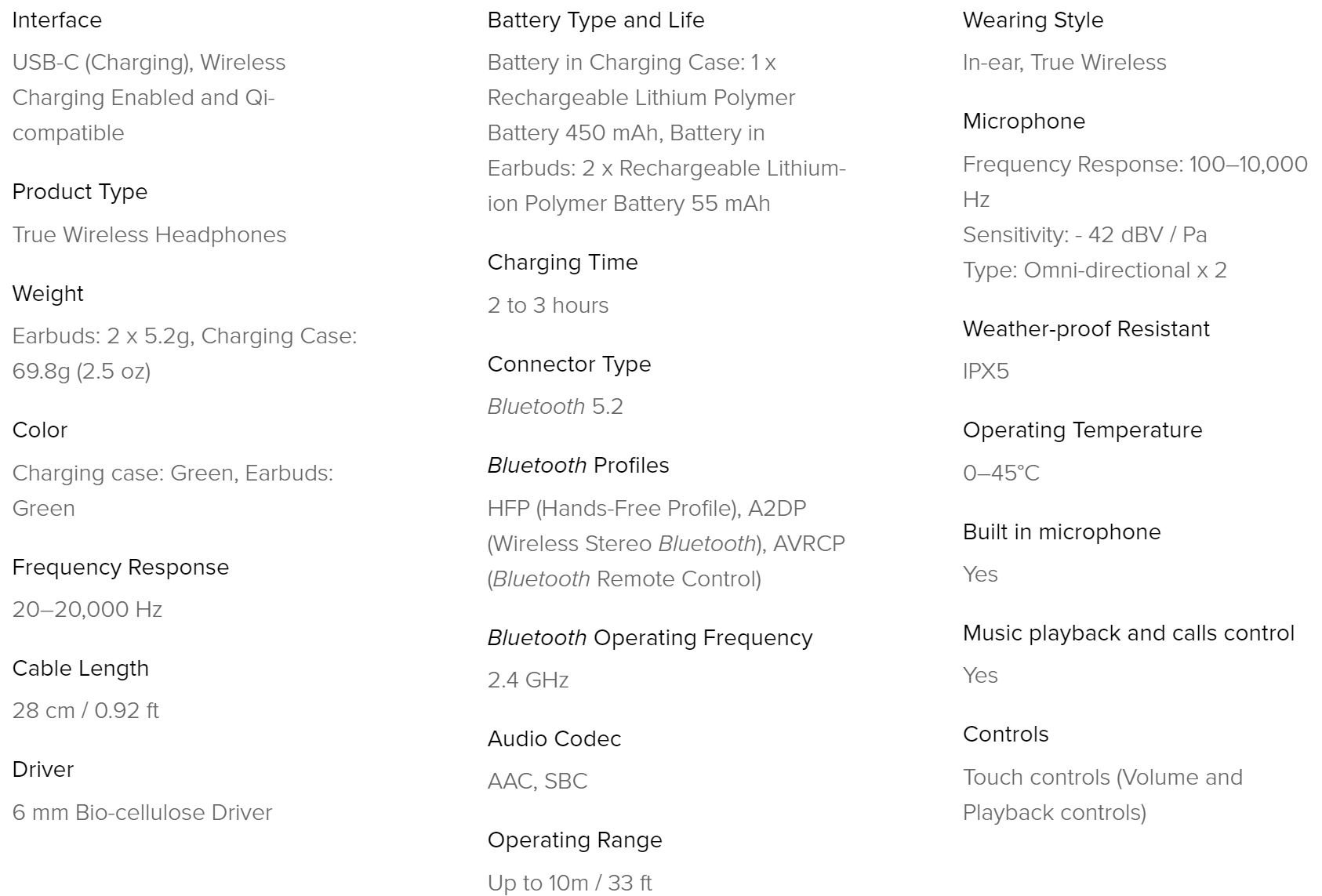 Having a soft spot for minimalism and rounded earbuds without sticking bits, I fell instantly in love with the aesthetics of this device. Bearing no hardware buttons and only a circular LED strip on the outer face, the Outlier Air V3 fits comfortably and inconspicuously in the ear without any protruding ends. The metallic green finish also helps to not draw too much attention while packing a classy look.

The charging case also bears this minimalist appeal with only the company logo at the top and rear end. On the front end are indicators for the earbuds and the charging case’s battery level; there you will also find a USB-C port for charging it. 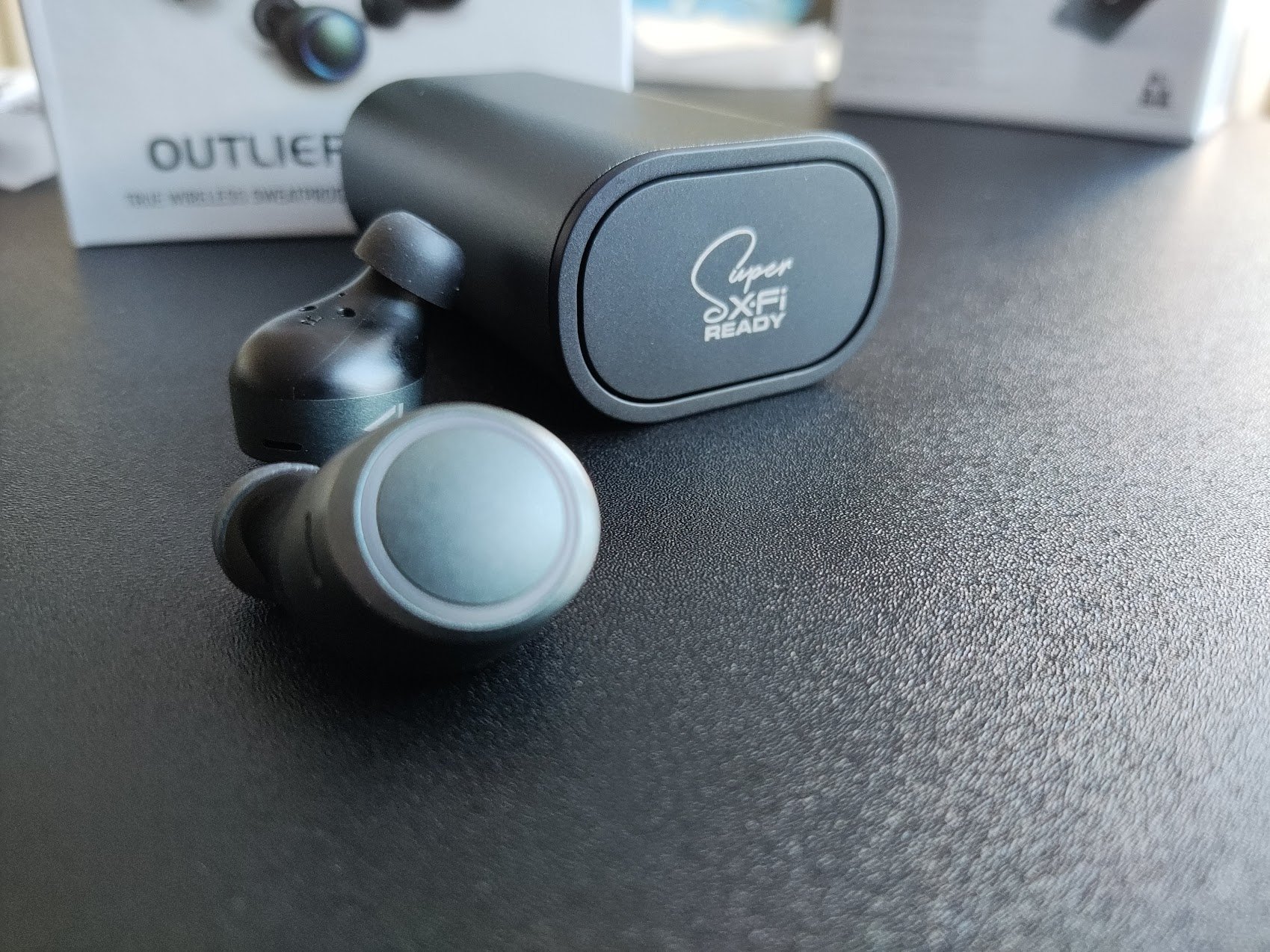 While minimalism is front and center with the Outlier Air V3, it does not compromise on features. One of my main gripes with most earbuds is that they are not fully independent as they usually lack the ability to control volume. Even if a touch panel is integrated for controlling music playback and calling your phone’s voice assistant, manufacturers somehow tend to omit the ability to control volume. This means you have to reach to the source device to adjust how loud you want the audio output to be. Given the whole ethos of earbuds, it seems counterintuitive to not make them more independent when it comes to controlling audio aspects.

Thankfully, and I cannot stress this enough, Creative gets it. With the Outlier Air V3, you actually have proper access to the whole audio control gamut from the volume, playing/pausing music, skipping tracks and calling up Siri/Google Assistant. On top of that, with the companion Creative App, you can customise the touch controls on either earbud.

This app also lets you update the device’s firmware, provides equaliser controls and lets you toggle and adjust the earbuds’ modes. There are three modes you can tune the device to: Off (aka regular), Active Noise Reduction and Ambient Mode. These can be toggled via the touch controls as well. Ambient Mode is said to let in some of your surroundings sounds so that you are aware of any happenings that might require your attention. This can be handy when cycling or walking on a busy street. Active Noise Reduction, as the name suggests, creates a more personal soundscape by reducing noise coming from the surrounding. The level of these modes can be adjusted in the Creative App.

While having such options are welcome, truth be told, I did not find much of a change when switching between modes. The main difference is that other people hear less audio leakage in Ambient Mode. But I would have the same level of ease/difficulty to hear others speak to me from whichever mode I was on. Best would be to reduce the volume (finally possible via touch controls on these earbuds!) to hold a conversation or raise it up to block off external sounds.

Another feature that the Outlier Air V3 packs is Creative’s iconic Super X-Fi technology (SXFI). The latter emulates a multi-speaker surround system experience which is wildly different from what you might be used to, which are essentially having speakers next to your ears. It’s best experienced than read about and is really a standout feature of Creative’s that I found to greatly enhance the audio experience.

However, this effect is more evident when the device is plugged via a USB-C cord and is less pronounced over Bluetooth (for example with the SXFI Air). Given that the Outlier Air V3 supports only Bluetooth connection, it can only deliver SXFI-enhanced audio via such a connection. While it is minimal, it nevertheless does offer a noticeably better sound quality. But it is limited to audio that is played through the SXFI app on local music files and does not support streaming content such as from Spotify or YouTube. This is because the Outlier Air V3 lacks the SXFI UltraDSP chip that would enable the technology to be used in all content. Creative could consider integrating ths chip into the V4 earbud iteration to enable listeners to make full use of its standout feature.

Sure the Outlier Air V3 is feature-rich but these would be mere fluff if the audio quality was not decent. But I am happy to say that these earbuds do deliver quality soundscapes through and through. It might not be on par to high-end headsets but it isn’t far off as you can even detect minute audio cues that are noticeable with quality peripherals. Whether you are listening to your favourite playlist, watching a video or playing a game, the Outlier Air V3 delivers crisp and clear audio. The soundscape is neatly balanced between the bass and treble, making it very versatile for your listening purposes; enabling easy switching between gaming and streaming videos. But you can adjust the bass and treble and save presets to your liking via in-app the equaliser.

Moreover, you can enjoy the quality audio for extended periods of time with these earbuds. They last up to 10 hours and can be juiced back up 3 times with the charger/carry case for a total of 40 hours of battery life. A downside of the extra battery in the carry case is that it ends up to be a relatively bulky peripheral; especially when compared to its competitors.

A cool addition is the wireless Qi charging support of the case. Of course, your mileage will vary depending on the features you use such as the Ambient/Noise Reduction mode and volume. But I could easily go through a whole week of moderate use. 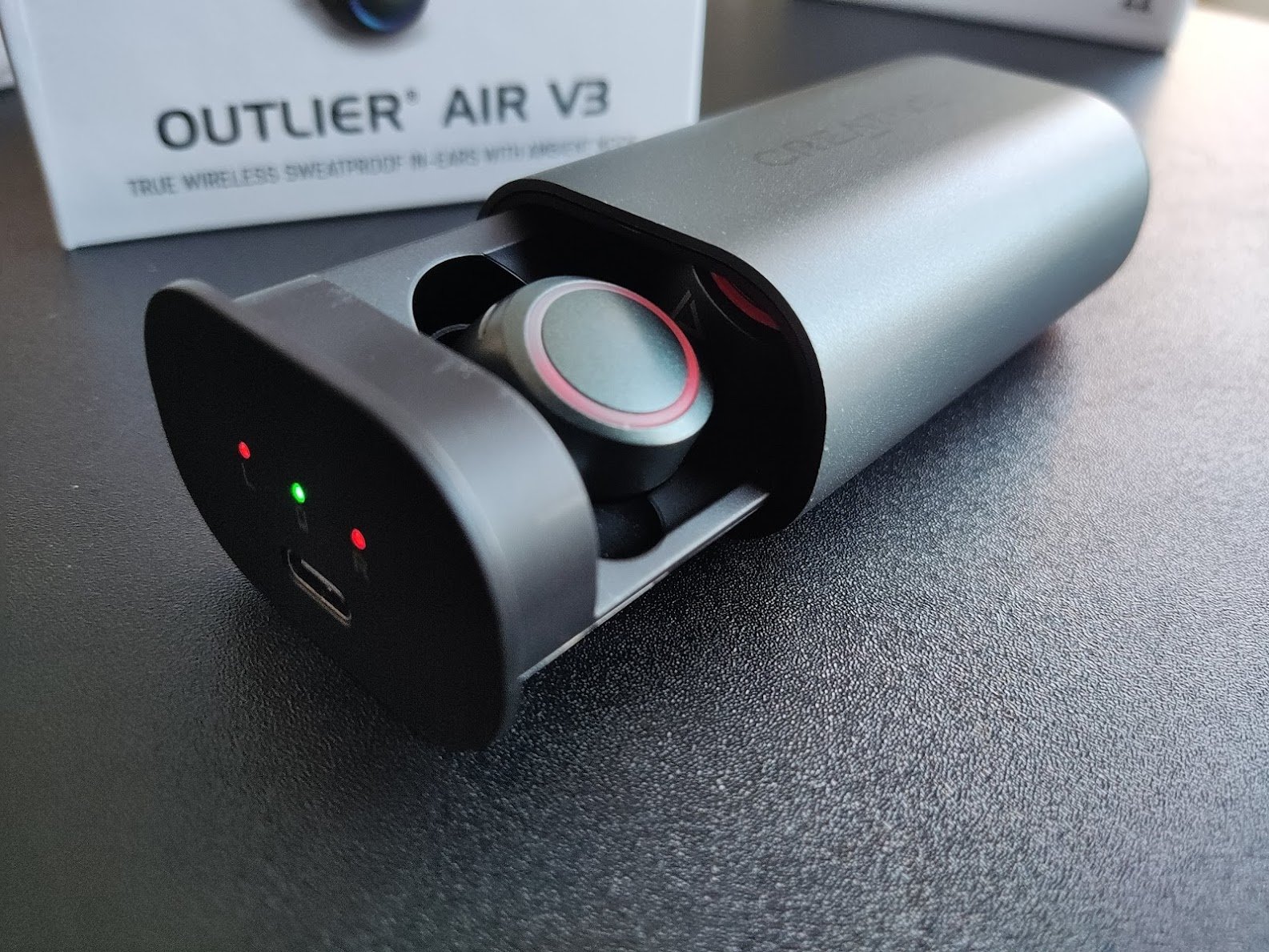 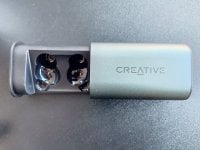 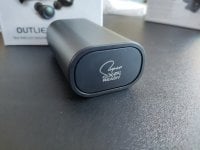 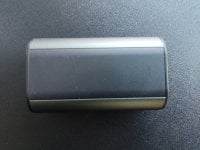 Another handy feature to the Outlier Air V3 are the quad mics.They really do help to pick up the user’s voice, especially for calling up the voice assistant. The dual microphones per earbud also make the user sound clearer to others during calls. This helps make the device more versatile, especially if you are using it with your smartphone.

Nevertheless, there are some few nagging aspects to this audio peripheral. Firstly, the touch controls can be a hit-or-miss affair at times, requiring awkward repeated taps to register a desired control. This is a common feature with earbuds with touch controls and is the reason I’d favour physical controls (maybe via small physical buttons).

And while I could overlook this given the full audio control it allows, the fact that a handful of its features are locked behind two separate apps is not ideal. At the very least, it would be welcome to have the ability to use the SXFI tech on any app; but we might have to the next iteration of earbuds to enjoy such a feature.

While there are some aspects it could improve upon, the Creative Outlier Air V3 easily provided me with my best earbud experience so far. It stands out with its audio quality, its support for the SXFI-enhanced audio, full on-ear controls and a classy, minimal look; and all these are delivered in a relatively affordable package.