Summer is here, so it might be time to look into upgrading your PC's cooling. Does Corsair have what it takes to beat the Summer heat?

For those that are new to the world of building your own PC, the concept of water cooling can sound pretty daunting. Requiring what some might think are advanced skills to install, water cooled CPUs definitely have an edge in temperature, but they’re still complex enough that most stick with air cooling. That’s where AIO coolers come in; quiet, super-cool, and tons of RGBs, Corsair’s Elite Capellix H150i is a dream come true for PC gamers looking to upgrade their cooling during these hot Summer months.

Fitting any modern CPU under the sun thanks to all the brackets it comes bundled with, the H150i has everything you need, whether it’s AMD or Intel, including mounting hardware for Threadrippers. Since iCue is involved, there’s a lot of focus on RGBs, with the cooler offering a controller (normally sold separately for $60) that offers support for three fans, and their respective LEDs. So, if you’re looking for something that’ll suit all your flashy light needs, the H150i excels in that department. Going all-in on Corsair accessories in your build makes it all seamless, thanks to iCue, so you can sync everything up perfectly. The cooling block has RGBs in it too, and you can install two different faceplates for it, to match the rest of your components. 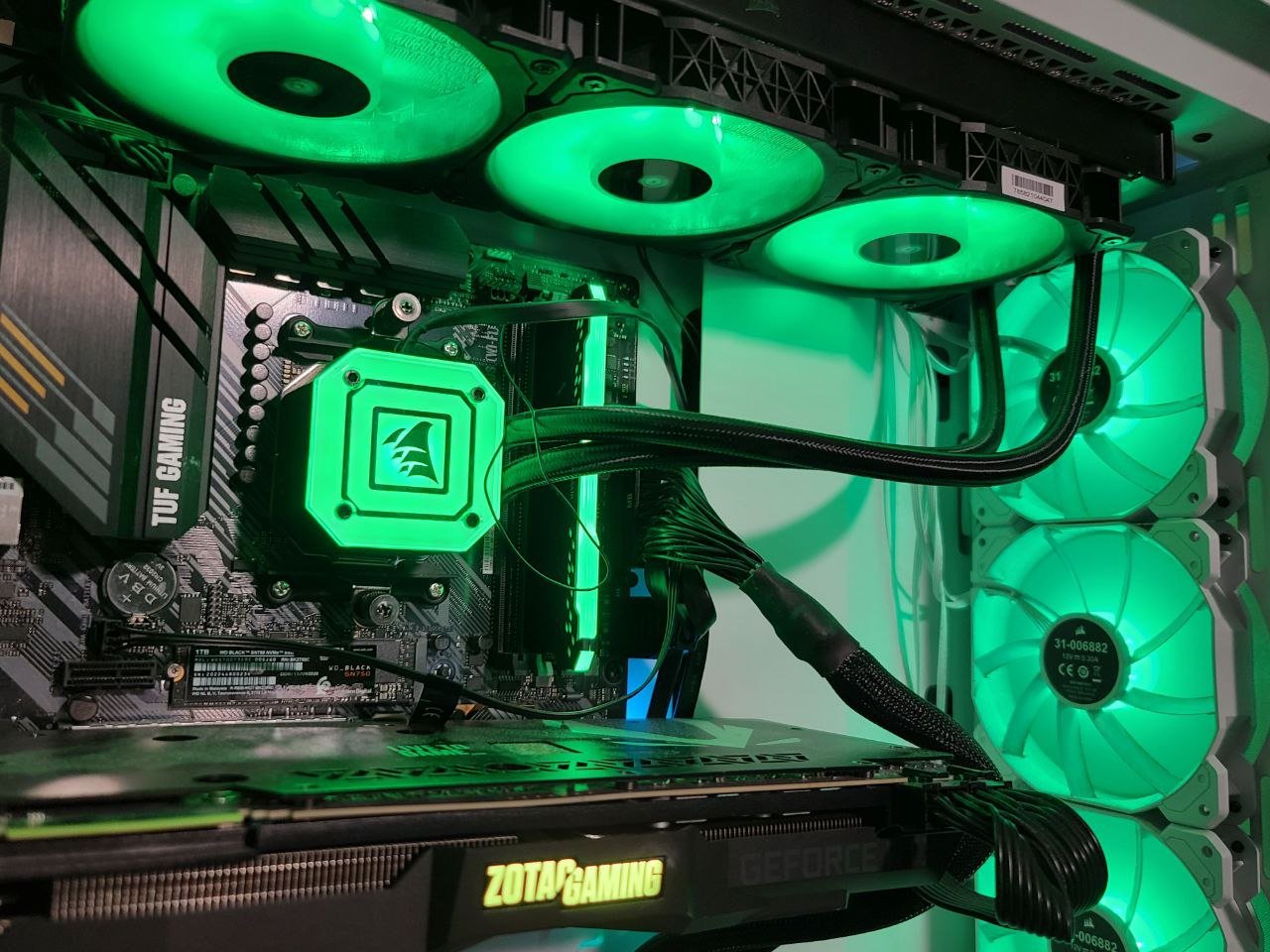 Corsair is also using new fans in this package, with three 2400 RPM 140mm fans that mount onto the radiator. Two incredibly thick nylon-braided cables hang down from it, that travel into the cooling block. Large and imposing in design, you’ll need a pretty big PC case to fit the cooler, but it’s ridiculously easy to install, to the point of being dramatically easier than my previous Wraith air cooler. Another difference between this AIO and an air cooler is just how silent it is. There’s a telltale hum that you can faintly hear, but beyond that, it makes virtually no noise; an incredible upgrade. The fans are equally quiet--even with the case open, they still don’t make even a quarter of the noise that my other PC, equipped with “beQuiet” fans and a Wraith cooler does. This is definitely a night and day difference.

The part that mounts to the CPU is a copper plate, which has a nice design that allows you to easily spread the thermal paste onto it. Before switching over to the AIO, I measured the temperatures of my PC, which had been using an air cooler, specifically the Wrath Prism. Idled, the CPU with the Prism was around 50C idle and 80C at load while playing a game where the fan curve would kick in and make a racket (Minecraft). Moving over to the H150i, things were drastically different; idle was 35C while playing the same game would only kick things up to 55C--that means I was getting the same CPU temps at load that I had originally gotten merely idled with my air cooler. The Corsair AIO also made virtually no noise, both in terms of the fans and the pump being whisper quiet. 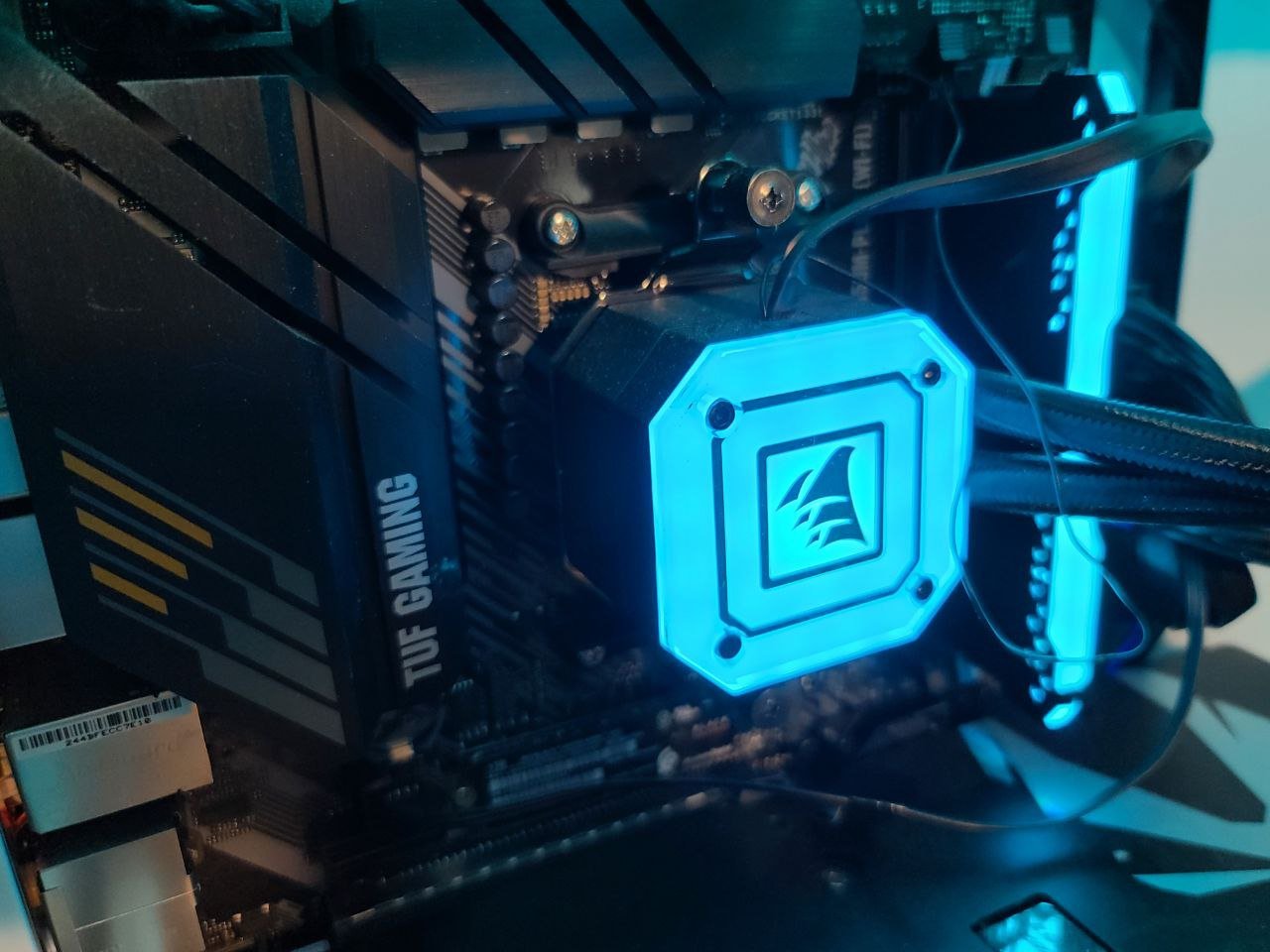 In the iCue program, you can easily adjust how the pump is operating, either at quiet, balanced, or extreme. It also lets you see how the coolant temp is doing, but annoyingly enough, there’s no way to adjust the fans from iCue, leaving you to adjust them either in the BIOS or a separate app. I hope I’m mistaken on that point, but no matter where I looked in the program, there way no way to change the fan speed--only the RGBs. Speaking of which, the RGBs on the fans are wonderfully bright, and super even, with no inconsistencies. There’s plenty of settings and effects you can change, so you can find your favorite setting and save it to memory. 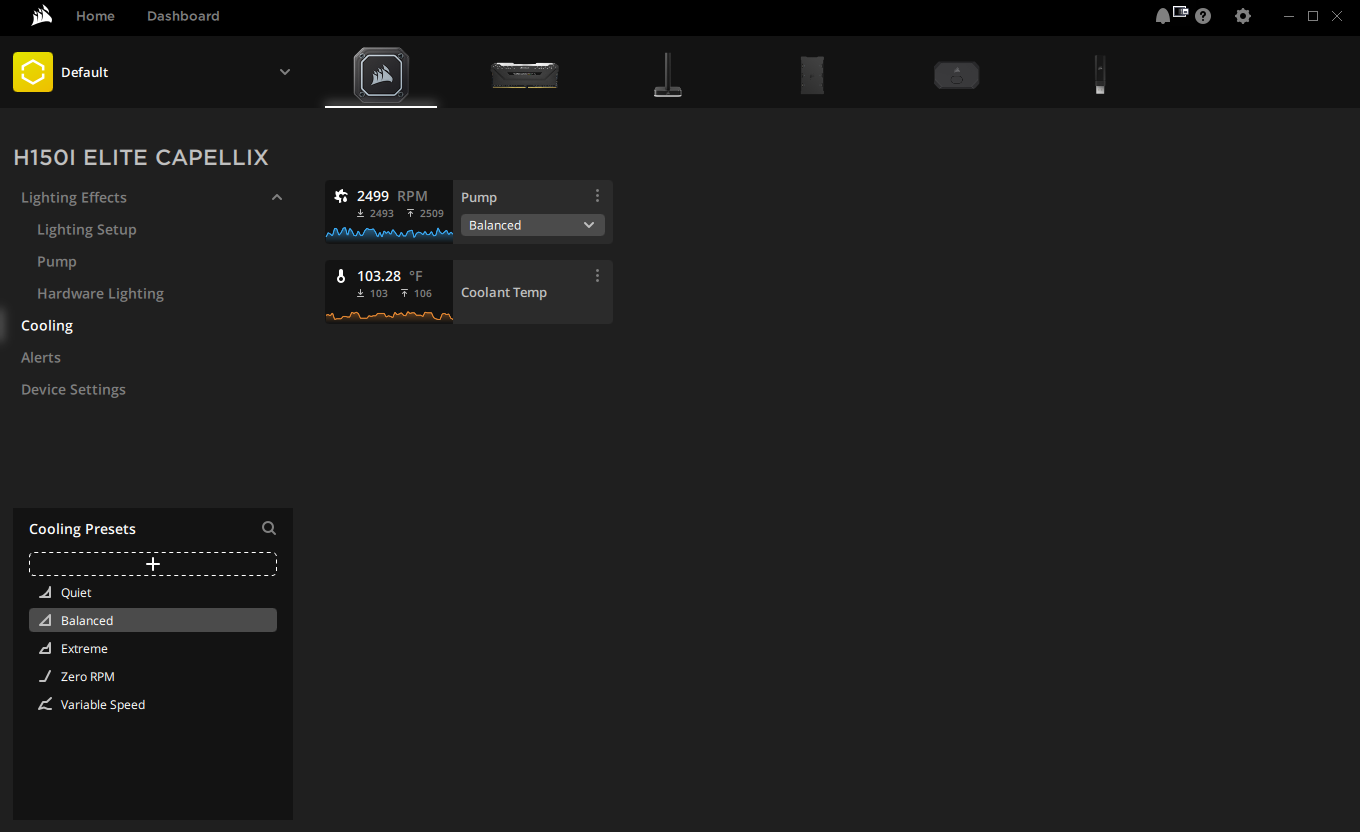 When you want your PC to really hardcore RGB-ified, some additional light strips can especially enhance the look. I've gone through a lot of them, in the pursuit of finding bright, evenly-lit RGBs that accent my PC's fan colors. Interestingly, Corsair's Elgato brand offers a light strip, boasting all those details that I've been seeking. Elgato's RGBs really impress; compared to LIFX or other cheaper brands, the colors are far more accurate and bright. It also has a completely blended line of lights, meaning it doesn't arbitrarily dim anywhere in the strip. I just wish it could sync with Corsair's iCue software--if it did, then it'd be the best light strip out there, even if it's a little on the pricey side.

If this is the power of water cooling, then I'm all-in. Corsair's H150i Elite Cappelix proves to be pretty dang elite, causing a dramatic decrease in my PC's temperature across the board. For less than $200, this kind of upgrade is a no-brainer, and all the lovely RGBs are an awesome bonus to this package.

Higher maintenance, higher price, and same temps at the same price range (or even less)

You get better aesthetics and more RGB leds, but that's it. Water Cooling isn't an upgrade unless you go through the custom route.
Reactions: SpiffyJUNIOR and SAIYAN48
bruv, your cable routing needs some love. also why tf do you run single channel memory?!

Osakasan said:
It's an AIO really an upgrade?

Higher maintenance, higher price, and same temps at the same price range (or even less)

You get better aesthetics and more RGB leds, but that's it. Water Cooling isn't an upgrade unless you go through the custom route.
Click to expand...

There is pretty much no maintenance with an aio, its a set and forget deal for the most part, thats why they are popular
Reactions: DarknessPlay3r
What are the microns of pressure

Joe88 said:
There is pretty much no maintenance with an aio, its a set and forget deal for the most part, thats why they are popular
Click to expand...

They're popular because they're exactly what they mean: A premade Water cooling system at a cheap price, wich is cool.

But it's still a water cooling system, you need to watch out for leaks, damages on the tubes and be specially mindful of the pump. Oh! and keep the radiator clean.

It requieres both active and passive maintenance, it has more moving parts than an air cooler (and the pump is harder to replace than a fan in an air cooling system) and it can actively damage your computer if a leak happens. All for the same performance and roughly the same price as an air cooler.
You dont replace or I should say cant replace the pump in these, they are not made to be user serviceable, when the pump dies you just toss the whole aio and buy a new one. General lifespan on these is about 5 years, maybe more or less depending on other factors.

They also dont just randomly start leaking as they are sealed units from the factory, unless it arrived broken or you caused damage to the unit. Other than blowing dust out the rad (which you would do anyway with a air cooler) theres not much else to do.
Reactions: DarknessPlay3r
you forgot to mention you can upgrade this AIO with an lcd wich actually is pretty nice it lets you run gifs and pictures on your pump or you can use the lcd screen to read your temps

@ Dark_Phoras: Nice one 6 minutes ago
Chat 2