For some reason, gaming accessories have always been aesthetically defined by RGB lighting. Any product aimed at a hardcore tech or gaming enthusiast, from mice to keyboards to HDMI cables, will be adorned with peacocking RGBs. One exception to this rule was the Cooler Master MM710 Gaming Mouse, released just a couple of months ago. With its honeycomb design, it seemed perfect to let some light shine through from its exposed interior. Realizing their fatal error, Cooler Master has now released the MM711, a variant on that mouse that includes the crucial RGB lights gamers demand.

The MM711’s landmark feature is its weight. Coming in at just sixty grams, it’s one of the lightest mice on the market. I'm used to playing with a heavier mouse, and I was surprised how immediately natural it was to play with something so light. The mouse felt practically weightless in my hands, yet I never felt that I wasn’t in perfect control of my movement. The PTFE mouse feet help it glide along a variety of surfaces smoothly, helping remove any last bit of resistance not negated by the weight. The buttons also click in satisfyingly, offering that vital tactile feedback that could be lost with such a slight device. Playing with a mouse this light, I honestly forgot it was there most of the time, which should be the goal for any kind of input device; remove as many distractions as possible, stay out of the way and let you get absorbed in your game.

You might expect a little device like this to be flimsy, but the MM711 showed no give at any point, regardless of the pressure I applied to it. Its small size is also less of an issue than I thought it might be initially, with its taller hump and wider back aiding comfort significantly. I do have relatively small hands, however, so while I personally never had a problem with it using a claw grip, you may want to check the dimensions carefully to decide if it’s right for you, especially if you’ve got larger hands. 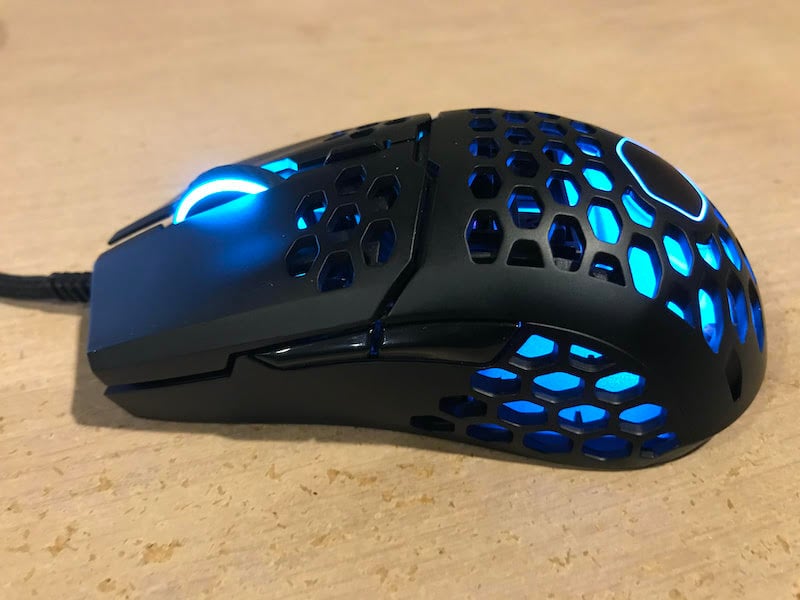 Part of the reason the weight is so low is because of the ultra weave cable. Light and flexible, it conforms to the MM711 ethos of being completely unnoticeable, in the best way possible. Despite being among a mess of cables on my desk, I never once felt any tug or resistance from the cable. Combine this with the cable’s exceptional length (about 5’9”), and I almost felt like I was playing with a wireless mouse, without any of the annoyances that come along with them. It’s worth noting that the cable length could be a problem depending on your setup, especially if you like things to look neat and tidy, but these problems can be tied up with a bungie regardless, so it’s a relatively minor issue.

Another concern going in was that the honeycomb design would trap dust and dirt, and the lights housed inside would only amplify how ratty the mouse was bound to get. I’m happy to report that, somehow, the mouse still looks as pristine as it did when I first got it. Cooler Master also insists that the innards are sprayed with a protective coating to keep it safe from water and dust. Still, I can never shake the feeling that I’m going to somehow damage or dirty the mouse, and I don’t think I could ever be comfortable using it while snacking, so if that will conflict with your play style, this might not be the mouse for you.

Given the elegance of the design, it’s forgivable that the MM711 doesn't reach the same heights when it comes to other features. The PixArt PMW3389 sensor, rated for up to 16,000 DPI, and the OMRON switches, rated for up to 20 million clicks, are both impressive and appreciated, but not unheard of for mice in this price range. Similarly, the button below the click wheel for cycling through DPI settings is useful, it's small enough that it won't be hit accidentally while staying in a handy location, and the RGB changing to indicate the current DPI is a nice touch. However, the presets leave a little to be desired. There are seven presets, which makes it hard to swap between the ones you'll actually use in tense situations.

Frustratingly, this problem can't be fixed by Cooler Master's customization software, and it's possibly the only area the MM711 falls short of its competition. You can edit the specific values of each preset, but there's always going to be seven you need to cycle through before reaching your destination. Cooler Master specifically recommends the MM711 for twitchy, fast-paced shooters, as that's where the benefits of the lightweight mouse shine through the most, but those extra seconds it takes to find the right DPI while lining up a headshot could ruin your advantage. The software measures up otherwise, offering standard features like RGB customization and letting you set your preferred lift-off distance or polling rate, but that one omission is glaring. 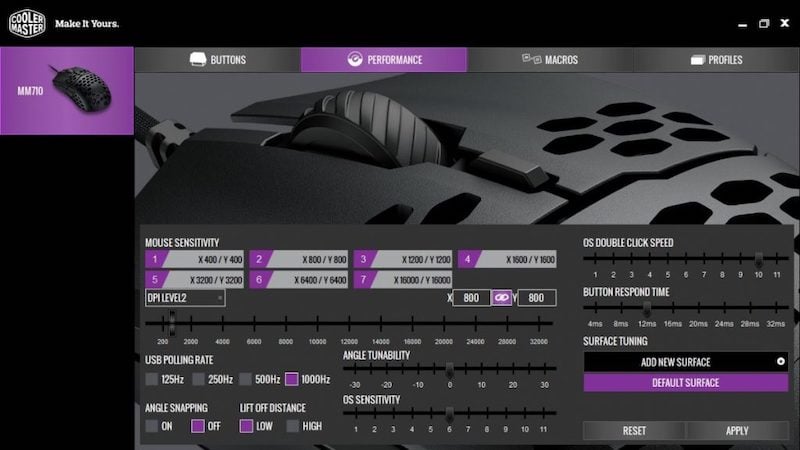 The MM711 is a great gaming mouse. It’s remarkably light, has a comfortable and aesthetically pleasing design, and has the function and reliability you’d expect from a Cooler Master product. Yet, it’s strangely undercut by its predecessor. Its main appeal is the weight, but the MM710, unburdened by RGBs, is a full seven grams lighter and retails for ten dollars less. This leaves the MM711 in a little bit of an awkward position. Anyone would be happy with its performance, but I’m also not sure who exactly it’s for, except for lightweight mouse enthusiasts who absolutely refuse to compromise on their RGB lighting. Combine that with the other caveats that come along with it (tiny design, exposed interior) and it seems like a pretty small target to hit. 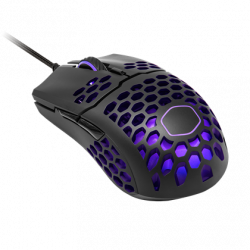