In the race to create a competitive super-light mouse, Cooler Master has debuted the MM710. Weighing in at only 53g, this is the lightest gaming mouse, ever.

If you follow current gaming hardware trends, the popularity of RGB-clad everything has been on the rise for the past few years. However, when it comes to competitive gaming, professional players aren't likely to focus on the bells and whistles, in favor of keeping things simple, in order to maximize their skill. For many, the weight of their mouse is a make-or-break deal, with lighter mice helping them attain clutch wins made from the slightest of movements from their device. As top tier players began to favor lightweight mice, companies began to cater to their needs, with the Glorious Model O, Finalmouse, and Gwolves Skoll all arriving on the scene, clad in a honeycomb shell, done purposefully to shave off as much weight as possible. Now, Cooler Master has entered the scene, introducing their take on the lightweight gaming mouse: the MM710.

At 53 grams, the MM710 is Irrefutably the lightest of mice on the market; that's less than half of the mouse I use daily, the Logitech G903. The difference was staggering at first, and I found myself shocked at just how different it was to use a mouse with such a lighter weight to it. It's also a relatively small device, measuring at 116.6 x 62.6 x 38.3 mm, fitting naturally into my hand when in a claw grip. Unlike most other mice, there's hardly any tapering in the center, with the MM710 remaining nearly the same width from tip to back. I expected that factor to cause a little awkwardness in use, but in all my time with this mouse, I never had a problem with hand/wrist fatigue or discomfort. 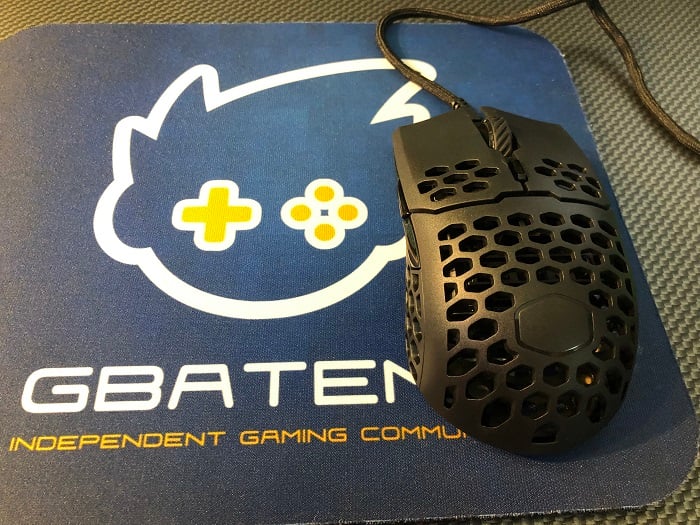 Considering just how light this mouse is, you might expect it to feel a little flimsy or cheap, but that's not the case. The smooth, matte finish was great to hold, and the plastic itself held up without giving any, even when I tried my hardest to crush it in my hands. However, I did notice that if you grip the mouse in both hands, and try to press on the plastic directly below the back/forward buttons, they will click in, ever so slightly. You're not going to encounter this while you're normally gaming, or under any average usage, but I did feel that it was worth noting. Other than that, the build quality feels great, and the punched-out holes had the benefit of keeping the mouse cool during use. Now, the design of the MM710 might raise some concerns as to how it handles dust, dirt, and other small particles, which could ever so easily find themselves inside the honeycomb holes of the mouse. Cooler Master has ensured that the internals of the device have been coated with a protective material, in order to protect the important pieces from risk of damage through moisture, dirt, or dust, though I still wouldn't recommend this come anywhere near any potential Dorito-handed gamer friends. Also as a downright adorable detail, each of those honeycombs isn't the typical hex shape: they're instead modeled after the Cooler Master logo, which gives the mouse a bit of a unique-looking style.

Featuring Omrom switches, the MM710's buttons are addictively clicky and tactile. There were points where I absentmindedly found myself repeatedly pressing the left click, just because the noise and feel of the switches were just so satisfying. The switches are rated for a whopping 20 million clicks, which means if you make 8,000 left-clicks each and every day, this mouse will functionally last a minimum of about 7 years, or could handle a dedicated 4,115 hours of hardcore PC gaming. 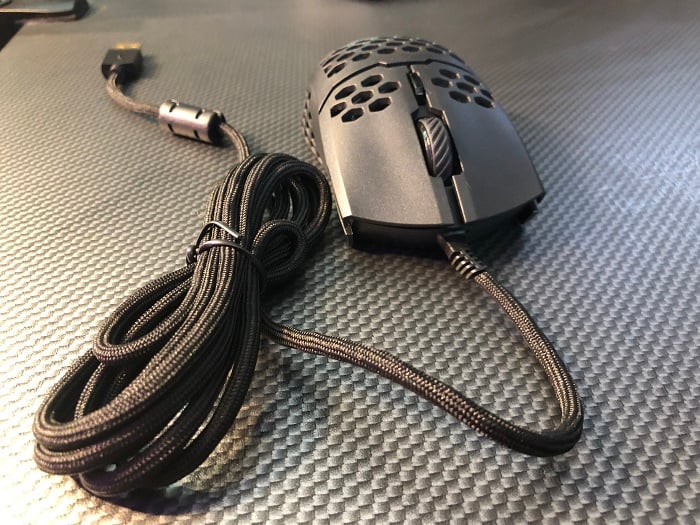 Cooler Master touts the fact that the MM710 comes with an ultraweave cable, one that's light enough to pair well with the weight of the mouse, and not have any drag. The cord certainly feels nice upon first contact, and it is quite light, but after extended use, I felt that it kept getting in my way. Using a mouse bungie to better secure the cord alleviated any problems I ran into, and if you're dedicated to using wired mice competitively, you'll likely already own a decent bungie.

Now, at this light of a weight, you'd hope that the mouse offers a respectable sensor to actually perceive the quick motions you'll be making, and fortunately, it does. The MM710 is equipped with a highly sensitive Pixart (PMW3389) sensor that can handle a DPI of up to 16,000. You also get a set of PTFE feet for the mouse, to help it glide a little more smoothly across your mousepad, along with a much-appreciated replacement set included.

As with any other CM product, you can use their Portal software to customize the mouse for optimal use. There's no RGBs here to toggle on or off, but instead, you've got 5 different mouse profiles, all of which can have different macros, DPI's, polling rates, and sensitivities for varying mousepads. There's a great level of tweaking you can do within the software, so if the mouse isn't up to your standards out of the box, chances are you'll be able to make it so, with a few changes.

The engineering feat of producing a 53g mouse sounded gimmicky at best, but Cooler Master proved that they have what it takes to create not only a light-as-air product, but one that actually delivers on being a solid gaming mouse, too. Its price comes in at $49.99, making it not only competitive in weight and design with the Finalmouse and Model O, but also lightweight for how much it'll cost your wallet. For those that want to try out the ultra-light honeycomb design of modern gaming mice, you can't go wrong with the MM710.