Cooler Master’s new line of headsets for 2020 are impressive, but do they do anything that sets them apart from the crowd?

As gaming headsets become an increasingly popular accessory, a plethora of companies have jumped into the space. Cooler Master has been in the PC accessory space since the early ’90s, making them a reliably safe choice. Though they started with and still primarily focus on cooling options for PCs, they’ve expanded into a variety of other accessories, like mice, keyboards and headsets. Their MH650 headset, part of their new line for 2020, is even compatible with consoles, but it’s clear from the outset it was designed with PC gamers in mind.

Let’s start with the most important aspect: the sound. With 50mm drivers, these are capable of putting out impressive sound. With the volume cranked all the way, it can get pretty loud, but still maintains its clarity. There’s good definition to the mid-range frequencies, and it gives off better bass than I expected, though you do need to turn the volume up a lot to get the most out of your bass. I also found that these aren’t the best at isolating sound, as I did get a few comments that people could hear sound escaping from them, so be careful where you use them. If you’re playing on Windows, you can also get 7.1 virtual surround sound features by activating them in the Cooler Master Portal app.

The app in general works well, with an easy to navigate layout that isn’t cluttered and doesn’t overwhelm you with unnecessary options. There’s three tabs, one for the lighting, one for the sound, and one for the 7.1 surround sound. The RGB lighting has the standard features you’d expect, letting you select a colour and a pattern (either static, breathing, or colour cycle). The sound menu lets you adjust the levels and mess with the equalizer. The 7.1 surround sound lets you adjust the placement and distance of the virtual speakers. These last two options also let you save different setups so you can quickly switch to your preferred one depending on the situation.

The omnidirectional boom microphone also makes sure you’re sending as good audio as you’re getting. It’s fairly sensitive, but does a good job of cutting out background noise and only picking up your voice. Considering how sensitive it is, I was surprised to find I needed to keep it closer to my mouth than previous headsets I’ve had, but unless you’re insistent on snacking while on mic (which you never should be), it’s not a problem. That may have just been an issue for me, however, and the arm is plenty flexible, so you can adjust it as need be to find the right distance. The mic is also detachable, with a handy rubber tab that covers where it connects to maintain the sleek look of the headset, so you don’t need to leave it hanging in front of your face for offline experiences.

The headset is remarkably well-designed. While it’s not particularly heavy, the memory foam padding at the top provides extra comfort and support, and the cushioning around the earcups keeps them feeling comfy as well. The headband is metal reinforced, so it feels sturdy but still provides flexibility. The earcups can rotate, so they can find a more natural fit around your ears, plus they can also be rotated to lay more flatly on your chest if you’re wearing them around your neck. On the earcups themselves, you’ve got some standard controls and buttons. The left earcup has a volume slider and microphone mute button. The right one has a button for toggling the 7.1 virtual surround sound and another for turning on and off the RGB lighting. Honestly, these two buttons seem a little superfluous to me. (Any RGB lighting on a headset in general seems superfluous to me, but I digress.) It’s not necessarily a problem that they’re there, but I can’t think of a situation where you would need to quickly toggle the 7.1 or the RGB lighting, and the more buttons that litter the earcups the harder it will be to find the one you need in a pinch. Granted, they are on a different earcup than the mute and volume slider so you’re unlikely to get them mixed up there, and perhaps I’m just missing something and they are needed for some player’s uses. 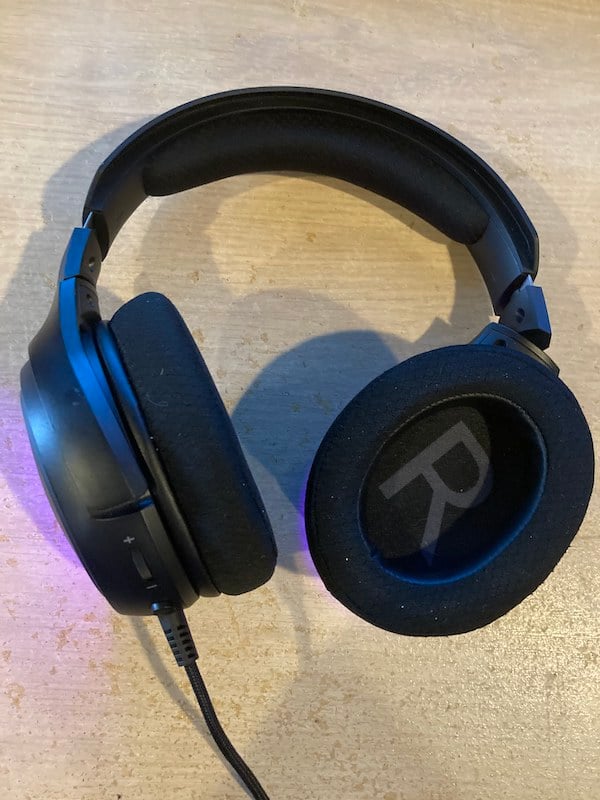 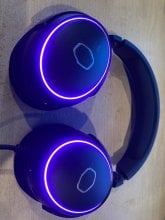 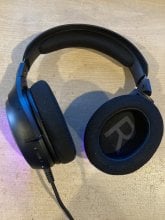 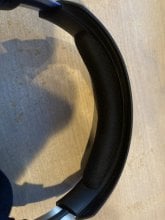 The one major issue I have with the design is the cord. It measures about seven feet (2.2 meters), which is fine for most PC players. I usually keep my headset plugged in to a back USB port and that stretched the limits of the cord a little, but plugging into a front port wasn’t a big deal, except for a little extra dangling. The MH650 is advertised as being compatible with the PS4 as well, however, and while that’s true, the length of the cord makes it a struggle. Since consoles are more likely to be situated closer to the floor than a PC, at the bottom of an entertainment centre for instance, around two or two and a half feet of the cord will be used rising up to your eye level. That means you can only sit around four feet away from your TV if you want to comfortably leave a little slack. It’s also worth noting that some features are only usable on PC, namely the 7.1 virtual surround sound and the customization of RGB.

In fact, partway through my time with the MH650, I broke the headset I had been using on my PS4, and decided to replace it with Cooler Master’s MH630 since I had been enjoying the review unit so much. The MH630 is essentially the same headset as the MH650, but it connects with a 3.5mm cable instead of a USB. This means that you lose the RGB lighting and the 7.1 surround sound, since they can’t be customized when only connected through the 3.5mm, but otherwise features the same overall design and sound output as the MH650, and since the 3.5mm cable allows you to plug it directly into a PS4 controller, it’s ideal for console players. It also retails for about $30 USD less than the MH650, so if you’re a console player or just don’t go about the 7.1 surround sound or RGB, the MH630 may be a better option for you. 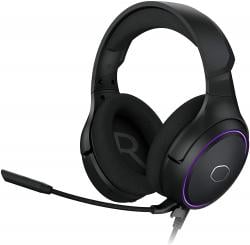