RGB fans unite, for Cooler Master's latest delight: the GS750 Headset Stand. This isn't your everyday headphone holder, though, this is "more than just a stand".

These days, if something exists, then someone's made a version of it with RGBs. Cooler Master is already known for having some of the best RGBs on the market, on both their fans and their keyboards, but now they're ready to unveil their next product in the form of the GS750. Cooler Master has rejoined the flashy-lights frenzy by making their own RGB headphone stand, set to compete against the likes of the Corsair ST100 and the Razer Base Station Chroma. If you're going all-in on making your desk a lightshow, you might as well complement your glowing fans, shining RAM, pulsing headphones, flashing keyboard, and radiating mouse with yet another matching accessory.

When I got my first pair of nice headphones--ones that I actually cared to keep in good condition--I wanted to make sure I had something to prop them up on, rather than letting them sit on the desk where they could be accidentally nudged off. That's when I decided to buy the cheapest possible product I could on Amazon, just so my headphones could have a nice, safe spot, all to themselves. Now, a typical headphone stand is a fairly simple object; you just need a base and a plastic T-shaped bar to drape your beloved pair of headphones over. The Cooler Master GS750, however, is not a standard stand. Not only can you store your headphones in style, but the GS750 also has wireless Qi charging, two USB ports, and even a soundcard and headphone jack, which lets your headphones make use of surround sound, even if they normally don't support 7.1 audio. It of course, also boasts a ring of LEDs, to go with the rest of your RGB-clad setup. 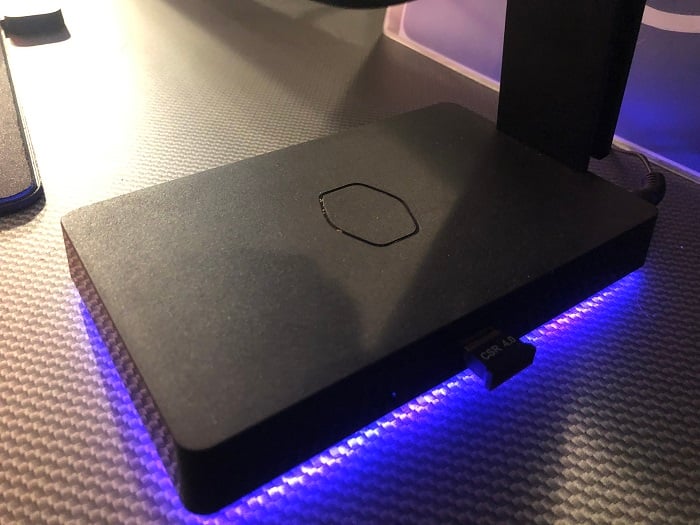 If you're already scoffing at the idea of RGBs, then you know right off the bat that this isn't the product for you. The GS750 is designed for those who have their deskspace and computer decorated with all manner of synchronized lighting features and glowing visual appeal. Personally, I love anything and everything that has to do with RGBs, so I was overjoyed with the headphone stand, in terms of appearances. Though Cooler Master's PORTAL software can be a bit unwieldy to use, within it are a handful of customizations for how you want the GS750 to look. You've got breathing, cycle, and static LED modes, you can choose from any set pattern of custom colors, and, for those who hate fun, the option to turn off the RGBs altogether. Thirteen LEDs surround the base, and they all blend into each other without issue and provide a nice tone, without being too overly bright or saturated.

While this is "more than just a stand", it's more than just a colorful setpiece as well. The GS750 is nicely built; the neck of the stand is made from aluminum and feels solid, and the cradle that's meant to hold your headset is coated in a rubbery material, to grip the headband and ensure that your expensive pair of headphones won't slip off. On the back, there's a little hook, so you can wind your cables up and keep them out of sight when your headphones aren't in use. Another thing that helps you keep things out of sight are the two USB 3.0 ports on either side of the base. Having an extra couple of USB ports within arm's reach can really be useful if you need to plug in something with a short cable, and it lends some extra functionality to the headset stand. 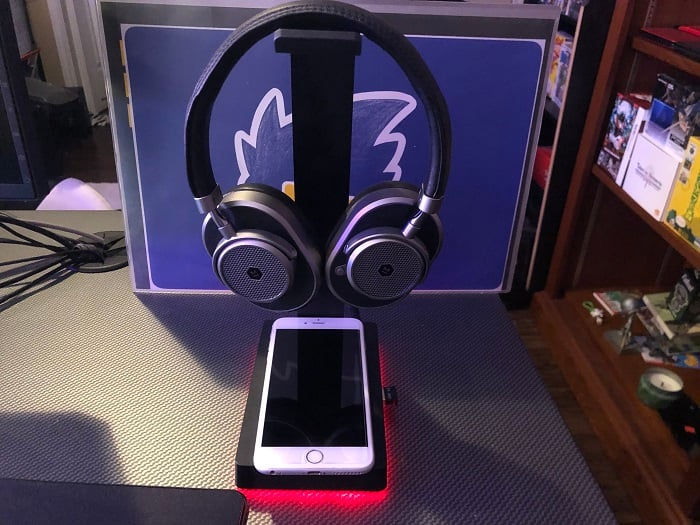 Prior to receiving the GS750, I had never once used wireless charging. I was vaguely aware that my iPhone supported such an ability, though I'd never really considered trying it out, and stuck to the reliable method of charging my phone through a cable. I never expected to really make frequent use of the Qi Fast wireless charging base of the headset stand, but I wanted to test it out for the sake of the review. Once I set my phone atop the base, the battery notification showed that my phone was indeed gaining charge, and at a fairly good rate, too. In just over two hours, my device had gone from 5% all the way to 100%, which obviously takes longer than just using a USB-C or Lightning cable, but was still very respectable, considering all I did was put the phone down and not have to bother with plugging anything in. I was completely blown away by how nice of a feature this is, and since it's part of the headphone stand, I don't need anything extra on my desk--it's built-in, and wonderful.

According to the fine print on the back of the box, the Qi charging feature manages to output 7 Watts for Apple devices, and 10 Watts for compatible Android phones. There's also a sensor inside the stand that can detect if your phone is overheating, already at max capacity, or sees an object that doesn't support wireless charging, preventing any issues from cropping up, and keeping your important tech safe.

As mentioned earlier, Cooler Master has packed in an onboard DAC into the GS750. By plugging in your headphones to the 3.5mm jack and using the PORTAL program, you gain access to 7.1 surround sound. Through this, you can select from a few presets, such as music, movies, or gaming, with the latter of which being extremely bass-heavy, for all those FPS games. It won't replace having an actual surround sound headset if you prefer playing your games with that type of audio, but it works well enough to show off what surround sound is like for those who don't have headphones that natively support it. 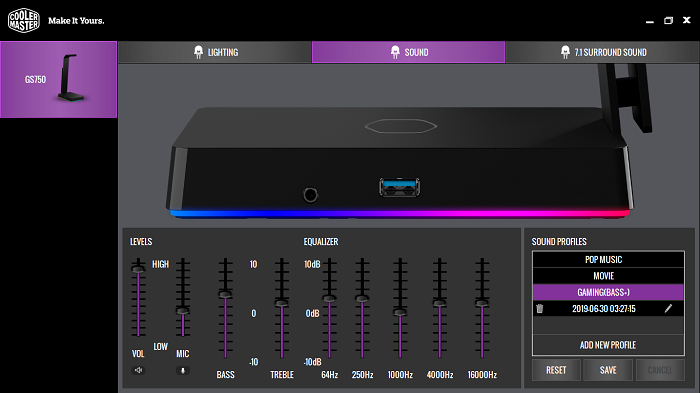 So, with all these fancy features and RGBs, you might be wondering what the price is. Cooler Master has priced the GS750 Headset Stand at $79.99, equaling its rival, the Razer Base Station Chroma, and clocking in at a few dollars more than the Corsair ST100. Both opposing stands outclass the GS750 when it comes to pure RGB lighting factor, however, they lack the wireless charging capabilities that this has, which is what really sets it apart from the others. $80 might seem a little pricey, but when you consider that an aluminum headphone stand is about $19.99 on its own, a decent wireless charging pad will run you $14.99, and you have to account for the DAC, RGBs, and USB 3.0 ports, you're paying just a little more for the convenience of having everything bundled together in a gaming-friendly form factor. If you're an RGB fanatic, and you want something nice to show off your headphones with, the Cooler Master GS750 will be right up your alley. 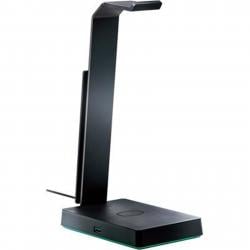