Single player
Local Multiplayer
Online Multiplayer
Co-operative
A cross between FTL and Mad Max, Convoy is an interesting tactical roguelike recently ported to consoles. How does this formerly PC-exclusive title fare when robbed of its mouse and keyboard controls?

The Nintendo Switch has become a safe haven for indie games, particularly for ones ported over from PC. While PC ports are becoming more common on all three major platforms, the Switch seems to be a particular favourite. One reason is that the more straightforward store layout makes it easier for indies to be noticed than they can on the cluttered PS4 or Xbox One storefronts, but more importantly, the touchscreen controls allow for easier replication of the mouse controls these games were usually designed for. While it’s certainly not a perfect solution, being able to simply tap at the screen is a good substitute for a mouse when navigating the often cluttered menus of PC games.

Which is why it’s so frustrating that Convoy doesn’t make use of the touchscreen controls. Convoy is a tactical roguelike in the vein of FTL: Faster Than Light, meaning you’ll be spending a lot of time upgrading various aspects of your vehicles and most of your time in combat coordinating them. The menus are manageable, if still a bit cumbersome once you figure them out, but the combat takes a hit due to the conventional button controls. 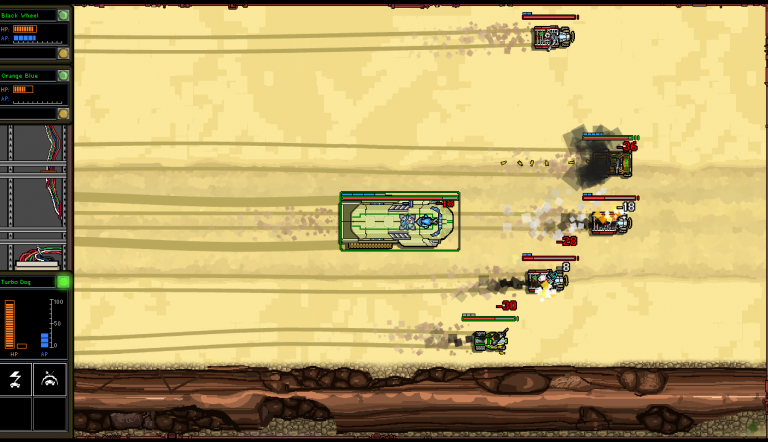 Combat in Convoy takes place on a grid, with your main vehicle occupying the centre squares, unable to move, so you must use support vehicles to protect it. You do this by using your cursor to select one of your vehicles, then selecting an enemy vehicle for it to attack, then a square on the grid for it to occupy as it auto-attacks the enemy with whatever weapon it has equipped. It doesn’t sound like a lot, but given how unforgiving Convoy’s combat can be, it’s stressful to have to slowly tap your way along the screen as your main vehicle gets slaughtered and your support vehicles sit uselessly, waiting for direction. It’s especially frustrating that if the target moves out of range of your support vehicle, or is destroyed by it, your vehicle will take no initiative to bridge the gap or move to a new enemy. You’re not even alerted that one of your vehicles is completely idle. There’s nothing inherently wrong with that—the stress that comes from having to frantically micromanage and supervise a hectic situation is usually what’s most fun about these types of games—but when that stress comes from struggling to get the game to recognize your inputs in a timely manner, it ends up feeling unfair. Not having played the PC version, I can’t definitively say how much better it plays with a mouse, but being able to quickly glide my cursor to where it needs to be sounds like it would make combat much more satisfying.

Strangely, given how the combat feels overwhelming with the number of things for you to manage, another major complaint is that there simply isn’t a lot to do in combat. You’ll need to keep your eyes peeled to make sure your cars are actually participating in the fight, but once you’ve got a target assigned to each of your cars, you’ll basically be watching them trade blows back and forth until one of them is dead. It’s not that this is boring, exactly—having to keep an eye on my cars kept me engaged for the most part—but it doesn’t offer a lot of opportunity to employ strategy. You’ll come across obstructions now and then that if a car runs into it’ll be instantly destroyed, so you have the option of ramming your car into the enemy to push them into assured destruction. The problem with this is that by the time I recognized an obstruction was coming, made sure my vehicles were okay, pushed my cursor all the way over to my car to position it next to the enemy, waited for it to get there, and then told it to ram, the enemy had usually moved by then. Your main vehicle can get a stun attack which pairs well with the obstruction mechanic, but because the combat is generally so brutal I often found I’d be using the stunner as soon as it was available to mitigate the damage coming in, so you’ve either got to be extremely lucky or willing to take a lot of extra hits to make that strategy work. 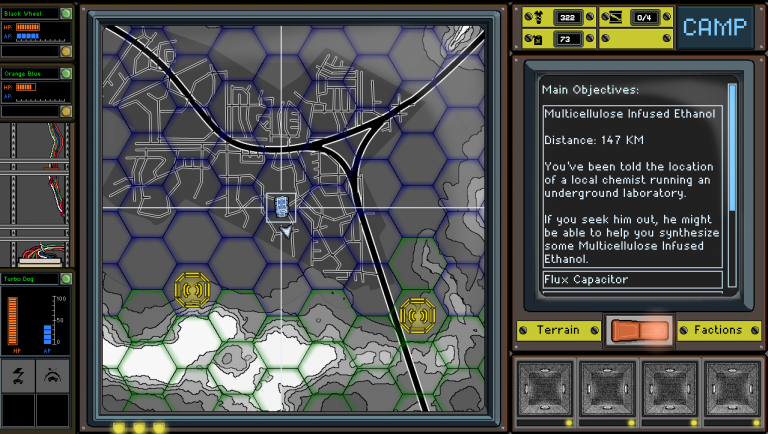 Despite these issues, the combat can still be quite satisfying. Perhaps it’s because the learning curve is so steep, but once I had the hang of things it felt good to be able to get through a combat and make it further into the mission. The extra weapons you can get on your main vehicle, like the stun attack, mostly just do extra damage so they don’t disrupt the monotony of the combat, but it’s hard to deny the feeling of power that comes from getting new loot and rolling in to destroy some enemies that had previously given you trouble.

Of course, the backbone of any roguelike is its randomization, and that’s something Convoy does well. The basic thrust of the non-combat sections is that you need to drive your convoy around a desolate, post-apocalyptic planet, searching for parts to repair your spaceship after it crashes. The map itself is pretty plain, just a flat 2D area with no obstructions, but dotted around are little points of interest. You’ll be given a short text window explaining what you’ve found and a few options on how to proceed, you might make it out with more supplies, or get ambushed, or be given the choice of fighting or paying off enemies to get out of a jam. While there aren’t a ton of different directions these scenarios can go, the flavour text is full of personality and the random element keeps you on your toes. The openness of the map also gives you a few more options as you can choose to pursue or avoid points of interest (though scenarios will still happen to you at random points as well) and if you have a particularly bad fight you can abandon your current objective and go to the nearest camp to heal up and resupply. 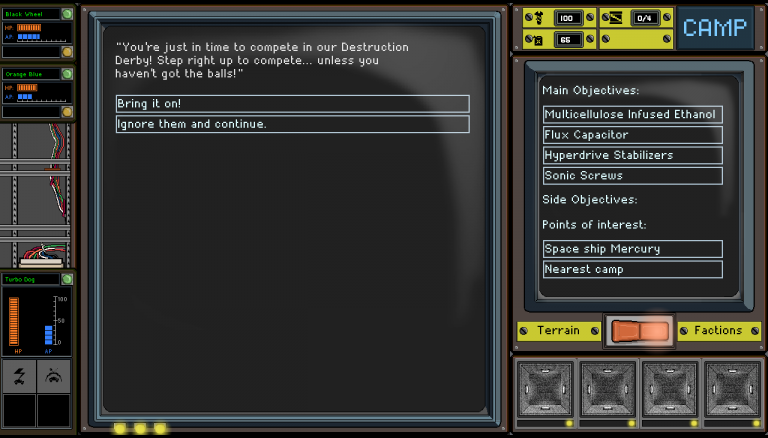 Convoy has a lot going for it as a tactical roguelike, but falls just short of the goal. While it nails most of the smaller details, like the flavour text and the openness of the maps, it struggles with the fundamentals, namely the combat, which can be overwhelming yet paradoxically repetitive at the same time. Console players might be more drawn to it because they don’t have access to the gold standard of the genre, FTL, but the console control scheme that fights with the fast-paced combat makes it a more dubious proposition. Convoy is still worth your time, especially if you’re a fan of the genre, but there are enough roadblocks to stop you from replaying endlessly.

What We Liked ...
What We Didn't Like ...
7
Gameplay
Being able to explore an open map gives a good sense of freedom, but that is often reined in by the repetitive combat. The basic structure and gameplay loop are engaging enough to pull you in, but there are enough problems to get under your skin.
6
Presentation
The pixel art is nice to look at, but it sometimes feels wasted on a game with such a brown and grey colour scheme. Luckily, the charming writing is able to pick up some slack in this department.
6
Lasting Appeal
The randomization and wealth of weapons, vehicles and equipment on offer mean that it’s unlikely two playthroughs of Convoy will ever be the same, providing potentially limitless appeal. Unfortunately, due to the repetitiveness of the combat, many of them will end up feeling the same and you might get tired of this faster than some other roguelikes.
7
out of 10

Convoy is a solid tactical roguelike. While it doesn’t offer much to make it stand out from the pack, and the repetitiveness doesn’t give it the staying power of the genre’s best entries, it is a fun distraction for people looking to switch things up from FTL.
Reactions: bigfatToni
Share:
Facebook Twitter Reddit Pinterest Tumblr WhatsApp Email Share Link
Doesn't look like much. Another dodgy pixel pile, but with very bland pallete.
Looks like a flash game from 2007
Pity. A good roguelike is a great thing to have but a mediocre one, much less a suspect port/implementation, does far less for me.
It's probably interesting to note that they had more planned, but apparently they bankrupted themselves with the scale of the other game they were working on, which is why the entire game has been such a clunky mess even from way back when it was released on Steam.

They're literally trying to scrape by with what they have.
Reactions: Sumasuun