RGBs maketh the gaming setup, but what do Cololight's hexagonal panels do differently in a saturated market of hue and lightness?

I've always wanted what I call "fancy lights". Not just your average light bulb, a light with flair and colour, customisation and diversity. I see these lights in my keyboards, in my mice, but I've never taken the plunge to get a standalone set. With offerings from Nanoleaf, Phillips, and a myriad of minor brands, I've put it off for one reason or another. Too expensive, too much hassle, how many GBAtemp reporters does it even take to screw in a smart light bulb? When given the chance to review Cololight, I for all intents and purposes leapt with joy, and haven't looked back since. 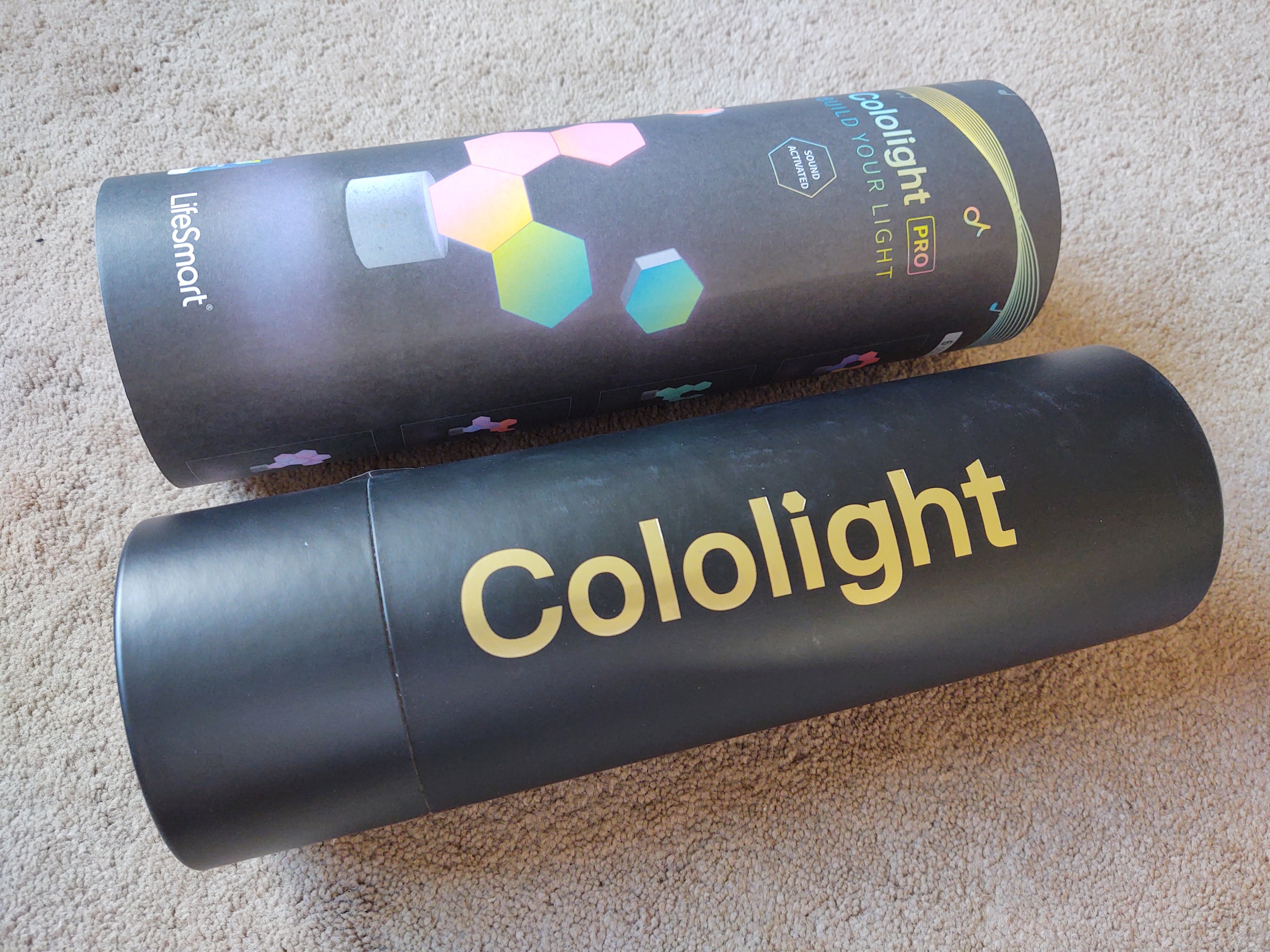 The unit I received was a six panel starter kit with stone base, retailing at £79.99. In this kit, quite unsurprisingly, you get six panels, a stone base, and one control unit. They arrived in a delightful black tube and felt well-protected for the journey, none of them displaying any sign of fault after a few weeks of use. The idea when setting them up is a simple one, you attach the control unit to one of your panels, and then attach the other panels in sequence. With their hexagonal nature in mind, you can come up with some really creative configurations with only a few real limitations.

Setup is a relatively painless process. Once you've attached the control unit to a panel, the lights are on and you're good to go. Tapping on the back of the unit will cycle through a few on-device configurations, but the real fun comes from making your own and the more complex features. To access these, you'll need an Android or iOS device. Once you've grabbed the app from the relevant store, you make an account, sync the control unit by following a few simple instructions, and you're set!

A few simple configurations for the lights⁠.

The app itself is an interesting affair, and perhaps where the majority of my criticism lies with the Cololight Pro. Much like the control unit, the app is loaded with a great number of pre-configured setups. From a dynamic rainbow pulse to a genuinely striking cherry blossom effect, there's enough to keep a less adventurous user content. For those wanting more, you can go to the lab and get stuck in.

In the lab, you can design your own static or dynamic colour schemes, where a dynamic effect is a series of static frames run on a loop. Each panel is made up of 19 individual lights which can each be configured here. Instead of each light being distinct and defined, they blend together wonderfully; this is particularly nice with the app only allowing you to pick from one of 12 colours. Though a little limiting, and definitely not on the same spectrum as the Philips Hue and some of its other competitors, I never felt particularly held back. If anything, it drove me to experiment with blending to see how different lights together would look. I felt like a child again with my little set of paints, mixing them unknowing of the result. The bigger limitation to newcomers may in fact be how lights are coloured by distance from the control unit. If you connect your panels in a sequence one after another, each can have their own individual light setup. If however you attach three panels to a single one, each of those three would share the same lighting, as they're the same distance from the control unit. Though it is simple, it takes a bit of time to get your head around it when coming up with new lighting effects. 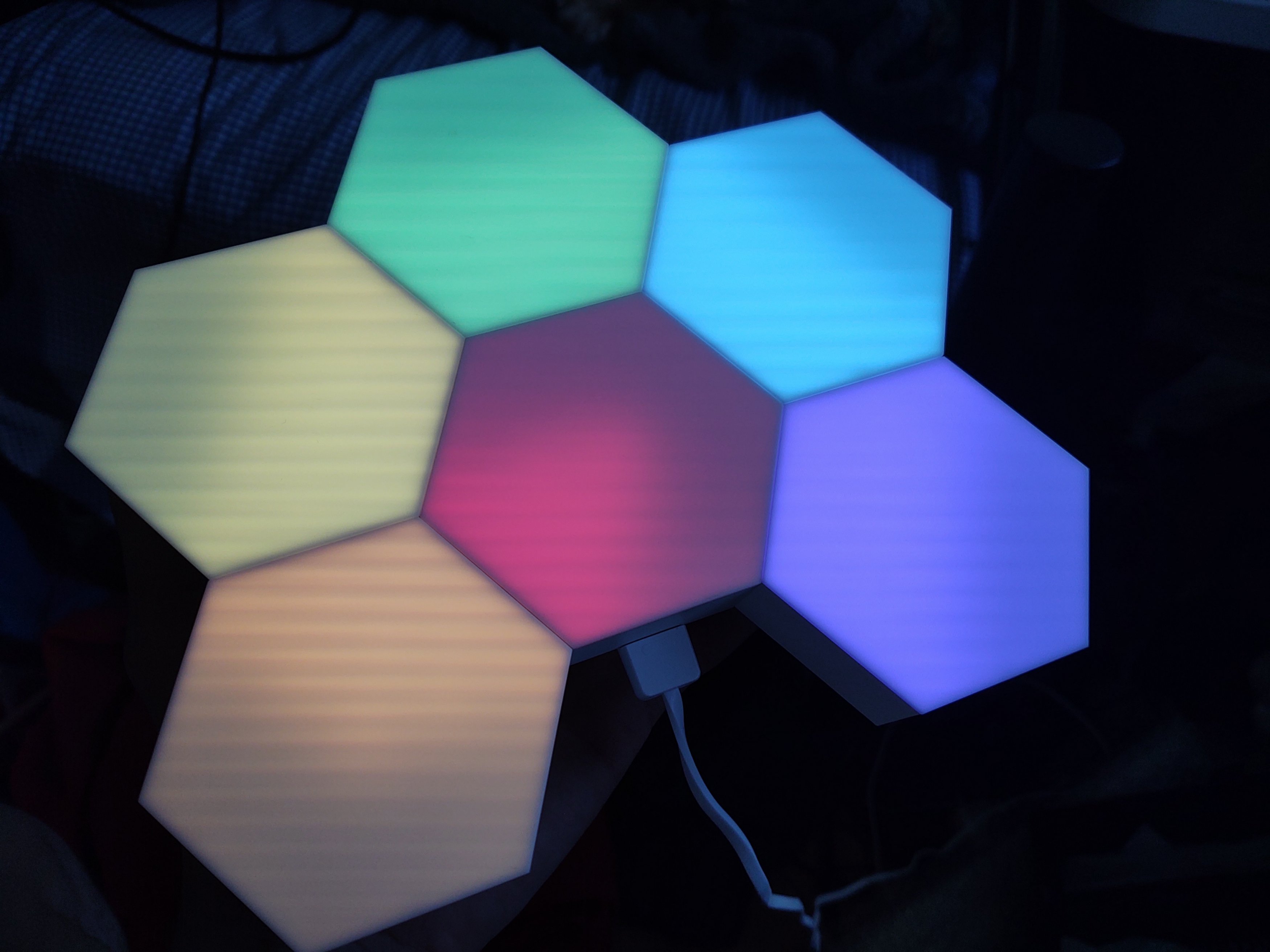 The full process of creating a new effect: pick the shape, show how they're connected, and colour them in!

Cololight Pro also supports some fun features that I have somewhat mixed opinions on. The most popular of these is likely the Alexa and Google Home support, letting people control their lights with their voice. It's not something I'm personally into, but for the sake of the review I gave it a shot and, well, I just couldn't figure out how to set it up. The Alexa app simply wouldn't find the lights, so I gave up. I do strongly believe this is the fault of my home network, with issues like this cropping up in the past, but with that in mind I can't really put an opinion to this either way. I can't imagine it being more complex than "Alexa, turn the lights on", so if you're into that, it might be a nice feature.

What I was more interested in was the timer functionality, automatically turning the lights off and on at specified times. With the right setting, you could turn it into an incredibly fancy alarm clock. Setting this up is just as easy as setting an alarm on your phone: pick a time for them to turn on, a time for them to turn off, and which days you want to use it on. It did work, but it wasn't perfect. For some reason, the lights turned on at 4am instead of 12pm, waking me really quite abruptly with bright rainbow lights. The device does have a time zone setting, which is set correctly, so I have no idea why it decided to run eight hours fast. Taking this into account, the timer is still perfectly functional, but it's an issue that shouldn't exist all the same.

With six panels and a great deal of enjoyment behind me, I was left wanting more. Six was fun, but I wanted wilder designs, more vibrant and creative configurations. So eager was I that I went out and bought ten additional panels, coming in at the low low price of £99.99. The interesting thing about having 16 panels is seeing just how far I can push them with only one control unit. Cololight themselves advertising that one unit can power roughly 20 panels, I was curious to see just how accurate this was; while not necessarily wrong, I don't think it's entirely accurate either. 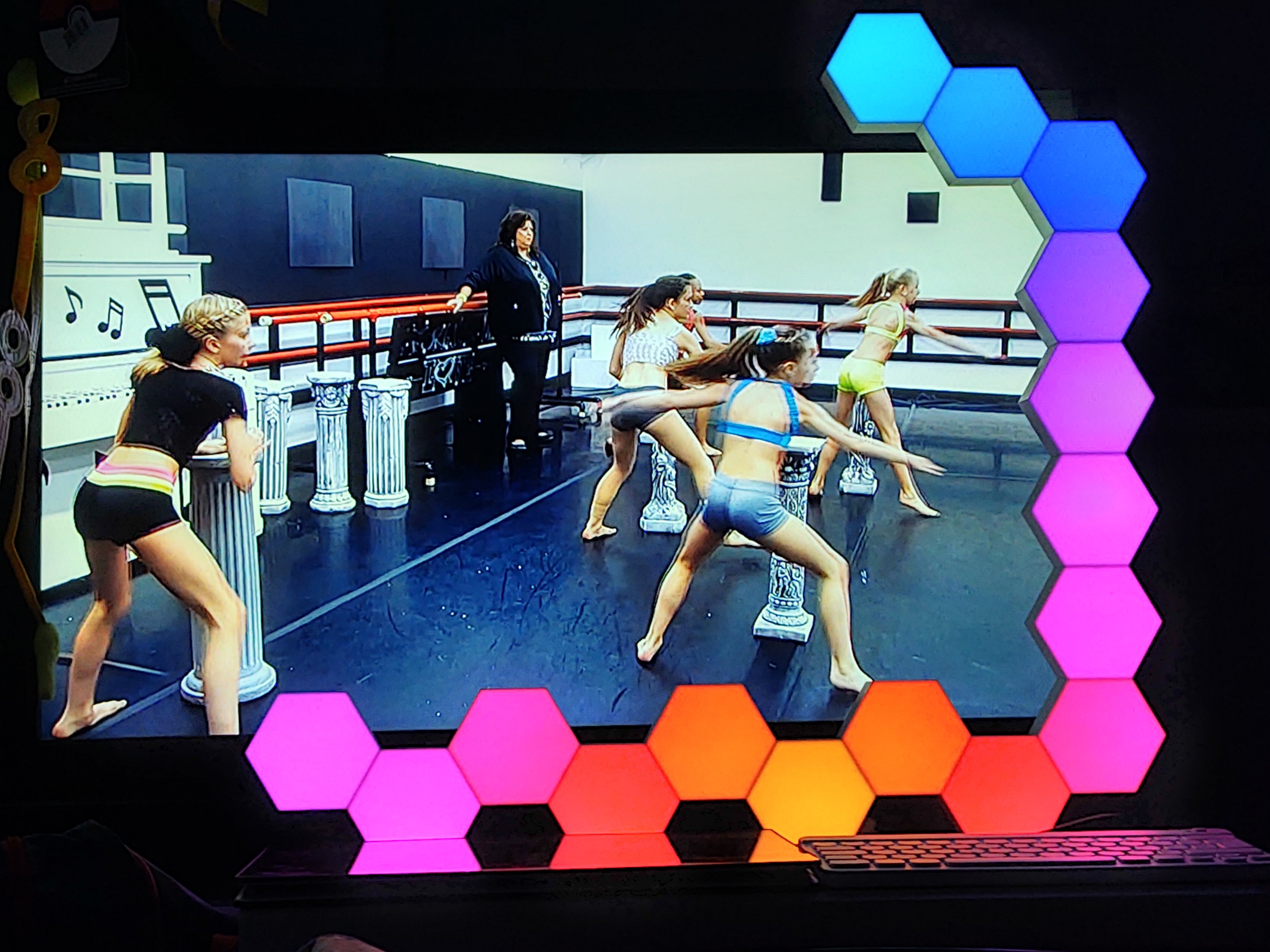 The perfect companion to Dance Moms⁠—at lower brightness settings, they look great around a TV.

Setting up my set of now-16 panels, they performed admirably on the default setting of 30 brightness, but what about 100, the maximum setting? Well on the maximum setting, they simply freeze. Dynamic effects stop working and the lights won't communicate with the app until they've been unplugged. I'm not entirely surprised⁠—100 brightness is bright, and these lights can be powered with as little as a Switch dock's USB port (note for testing I was using my tablet's plug, not the Switch dock). From my various tests, I've found the lights run well at around 60 brightness with the full 16 connected. It's a bit of a shame you can't buy control units, the means of providing power, individually to support these growing setups for enthusiasts; your only choice is to buy another starter kit. 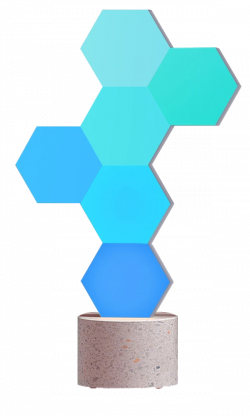