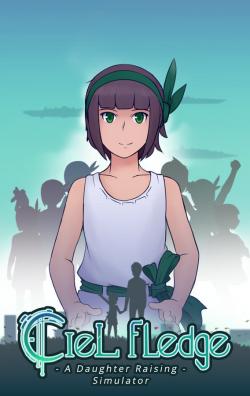 In the year 3716, the Earth is desolate, humanity is locked into a war with an alien race, and a small orphan girl shows up on your doorstep looking for a home.

“Feature creep” is a common term in video game development, referring to the way ideas for new features tend to accrue during development, and how it can lead to a game’s ambition outpacing its resources. Conventional wisdom says it’s important to decide early on what will and won’t be in your game so that you can properly build those features without distraction, and Ciel Fledge: A Daughter Raising Simulator could be the poster child for the harmful effects of feature creep. It’s a simulation game with lots of meters and micromanagement, plus RPG and dungeon-crawling elements, while also being a coming-of-age visual novel, set in a far-distant future with its own world that needs to be rounded out, that tries to track the development of a dozen or so characters over the course of a ten-year period as they contend with a mounting war for the survival of humanity. There’s a lot of interesting ideas presented there, but they’ve clearly crowded each other out for development resources. You can almost see the epic scope the creators may have had in mind, which only makes it all the more heartbreaking to see the version we got.

The story starts in the year 3716, with the Earth mostly deserted and humanity living in giant space Arks after a war with an alien race. Following the destruction of a nearby Ark, a ten year-old refugee is brought to your door and you are told you need to raise her. After choosing your character’s background (which determines what abilities your daughter will excel at), you’re introduced to the basics of fostering your daughter’s growth. She has five primary stats (Strength, Intelligence, Charm, Imagination and Spirituality), all of which get their own skills (Endurance and Survival fall under Strength, Etiquette and Grooming fall under Charm, etc.), and you need to raise them by sending her to classes or activities. The first problem is that you’re not given any short- or long-term goals to set for your daughter. Presumably a higher number is better than a lower number, but beyond that I wasn’t exactly sure what I was trying to do. There are Focus Trees, which set specific numbers for you to try and raise her stats to, but they only reward you with traits that help her raise her stats. A few months in you’ll be asked to try and get her Strength and Intelligence to a certain number before she’s sent to explore the dangerous surface of the Earth, but it’s a rare instance of actual direction. More short-term goals like that (say, if your daughter is Imagination-focused, asking you to get her musicianship to a certain level before a big recital) would give a sense of purpose to what you’re doing, especially if they could be tied in to long-term goals for her. As it was, I just flitted from activity to activity until I maxed out the skills I happened to be working on, then moved on to the next ones.

The other major problem is the process by which you actually raise her skills. The game is broken down into weeks, and at the start of each one you set an itinerary for the next seven days, determining which activities she’ll go to and which stats and skills will be raised. During the week you’ll also need to manage her stamina, discipline, mood and stress. Stamina is reduced from activities and can be replenished by assigning rest days. That works fine, but unfortunately, the other three meters are pretty much only impacted when she doesn’t get enough rest, as they were never once an issue for me until late in the game when my daughter had become so efficient at resting that she only needed one rest period a week to maintain her stamina, meaning there’s not much strategy to apply there. I did also notice them being impacted when I sent her to the same activity for a week straight, but I was never short on options for activities, so again, it was an easy problem to solve. This means that the only obstacle in planning her weeks is doing the simple math to make sure her stamina won’t reach zero. 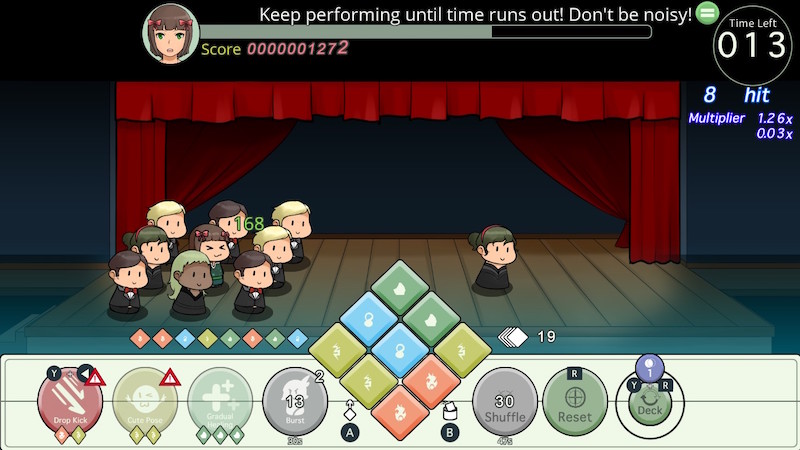 When I said above that there’s no shortage of options for activities, it’s important to note that most of the activities have a distinction without much of a difference. Most activities will pass without incident, just giving your daughter her stat boost and occasionally a short cutscene, but sometimes you’ll get an encounter that lets you play a little mini game for a further boost. They’re called battles, and there’s three different types: fight battles, which pit your daughter against an opponent with an HP bar; score battles, where you need to get a certain score; and quiz battles, where you need to follow certain directions. But they’re all functionally the same. You’re presented with a 3x3 grid, filled with either red, yellow, blue, or green tiles, and you need to select three of the same colour to progress, then those spaces are filled in with new tiles. Every time you complete a set, your daughter will either attack her opponent or her score will go up. That’s basically it. There are techniques that can help you, fuelled by what sets you’ve made so far (complete two red sets to do a strength-based technique, for example), but since there’s no penalty for completing sets that don’t apply to your techniques, you’re basically just completing as many sets as you can, as quickly as you can, until your techniques become available. The only exception is quiz battles, where techniques generally aren’t allowed and you’ll be given some rule to follow, but the differences are minor, usually amounting to either a timing puzzle or only being able to complete sets of one colour. There are some cute applications of this system to differentiate the activities (the housekeeping job will sometimes have a fight battle against a cockroach), but mostly the activities feel identical, and I often forgot what I was even doing.

Basically, Ciel Fledge is very grindy. You’ll be doing similar activities a lot, slowly building up numbers just for the sake of building them, but there is some satisfaction that can be wrought from the progression if that’s your thing. Having played the PC and the Switch version, I can say that I found the Switch version much more successful, at least when played in handheld mode. When chained to a desk, I found the repetitive grinding unbearable. In handheld mode, it was easier to simply flip it on briefly to do a week or two, or play for longer periods as a mindless activity when I was exhausted. Luckily, the performance in handheld mode is good. The touch controls are great, and it was light on battery consumption. There was some slowdown here and there, but it seemed commensurate with what I saw in the PC version. 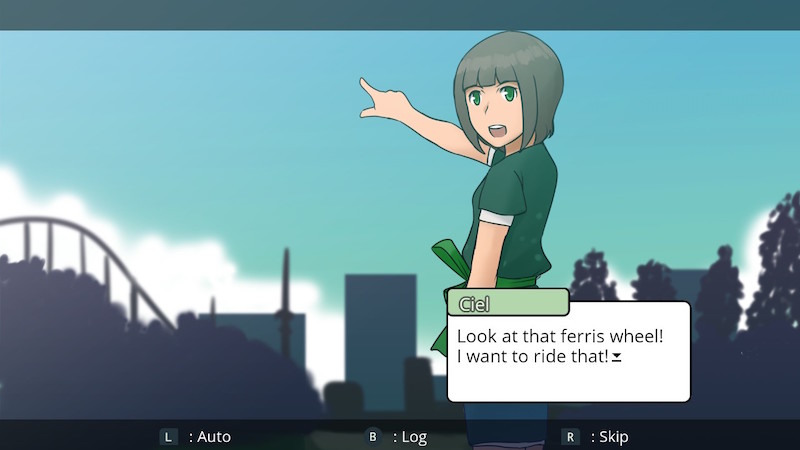 I’m a sucker for coming-of-age stories, so the story is what initially drew me to Ciel Fledge. While it fares better than the gameplay, it still has some major problems that hold it back. Namely, it also tries to be bigger in scope than it should be. With so many characters to juggle, they’re not given proper time to grow, and you can’t even focus on your favourites and spend extra time with them. Pretty much every character you’ll meet is introduced in the first year of the game, and while it’s smart to establish them early so you can see them grow over the course of the entire game, it doesn’t help them stand out from each other when they’re introduced so rapid-fire, and dealing with the same characters over and over doesn’t help with the repetitiveness of the gameplay.

Since the main conflict is the growing war between humans and aliens, there isn’t a lot of inner or interpersonal conflict among the characters. This can make the early years particularly meandering as the war isn’t a big focus yet, so you’re mainly spending your time meeting people and having short, expository conversations with them. Once the children are sent to explore the Earth with increasing regularity, there’s a melancholy feeling that takes over the game, almost reminiscent of A Separate Peace, that I found really engaging, and it’s something I wish the script capitalized on more. A stronger focus on the children, rather than spreading it out to so many adult characters, would have helped tremendously. 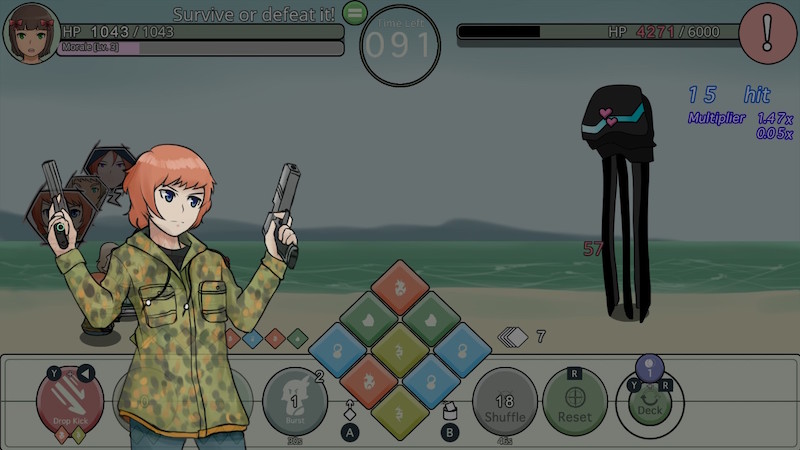 There are also a lot of issues with the presentation that make it hard to get pulled in by the game. The world as presented feels very small and thin, in that we never see any characters who aren’t part of the main cast. There’s also a distracting lack of details about the day-to-day lives of our characters, which is particularly odd in a simulation game. For instance, one early scene introduces you to two main characters when your daughter asks them for directions, marching up to them and asking if they know how to get to “this place.” I’ll admit that’s a petty complaint - obviously it’s not important where you and your daughter are headed when the point of the scene is to introduce us to the people who give you directions - but it’s illustrative of the mercenary efficiency with which the script is written, ruthlessly cutting out any details that aren’t vital, and this problem permeates the whole game. When I send my daughter to an activity, there may be a cutscene the first time where somebody explains what it is she’s doing, and another at the end where she comments on how far she’s come. But I don’t get a real sense of what she’s doing there. I don’t get a real sense of the other characters or why she’s friends with them, because pretty much all their dialogue only exists to serve the function of a scene. Since her friends are the only people I met at any point through the game, I have to assume they’re just friends because of necessity.

The game also struggles to bring itself to life with its visuals. As is standard for the visual novel genre, characters are represented with a handful of sprites in different poses, and short, exclamatory bursts of voiceover will accompany the text boxes to help convey emotion. Ciel Fledge seems to be particularly short on different poses for its characters however (likely because they needed to be drawn in three different time periods), and the voiceover is also minimal, rendering most dialogue scenes lifeless and inert. The art is cute and effective in quieter moments, but the style struggles to convey the menace intended by the villainous aliens, leaving the antagonists feeling much more toothless than was likely intended.

The one untarnished success is the music. It changes mood with your daughter’s progression, starting off simple and upbeat in her child years, before turning to a heavier guitar riff when she’s a teenager and mellowing out as she matures near the end. Beyond the clever gimmick, however, the music is simply catchy and fun, easily catching the desired mood whenever needed. 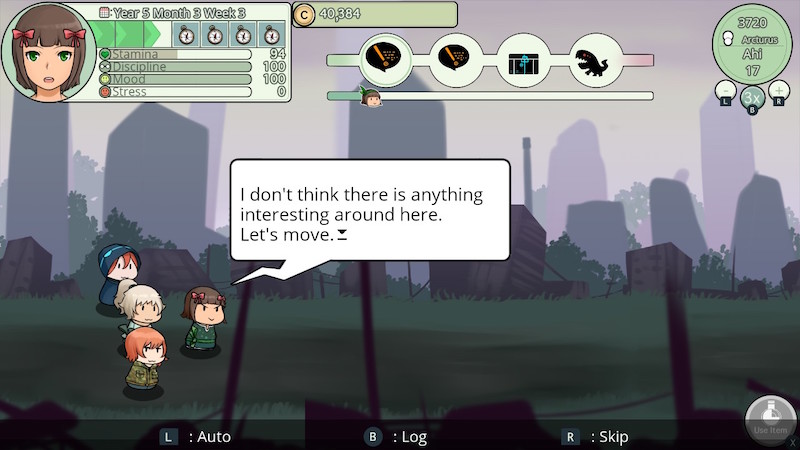 Ciel Fledge is undone by its own ambition. The grandness of the world presented means there’s not room for many of the smaller elements that are crucial to making the world feel real and lived in. There’s a plethora of activities to do, but without the resources to properly differentiate them, each activity ends up functionally the same. With a bigger studio behind it, Ciel Fledge could have been something special, but indie developer Studio Namaapa aimed too high.