Cannon Brawl is a Real-time Action Strategy game with a very "Adobe Flash" look to it. It doesn't strive to break any moulds or set new trends, however at its core, it is a game that is incredibly addictive. From the offset there is a Worms vibe: the land is destructible, it's cartoony and the weapons seem to have the same mechanics to them that Team 17 implemented years ago. But that's where the similarities end. There are no mobile units as such, and definitely no Concrete Donkeys; just hard and fast gaining of territory and the faint screaming sound of your enemies being crushed by your hand. It may just look like yet another indie port, but let me state this: it is glorious!

With an instantly familiar two-dimensional look to it; Cannon Brawl sets up a tale of an evil Uncle who has kidnapped your father, the King, and it's up to you to thwart his legion of minions in order to prevent him from taking over the land. It's a simple narrative that I could take or leave, as it really didn't make much difference to me what was going on along as I got to blow stuff up in crescendo set pieces. The general drift of this game is to pilot an airship, manage resources by farming gold or diamond deposits to then be able to afford armaments or artillery weapons to then destroy the enemies fortress before they overwhelm you and take yours. I have to say at first I wasn't expecting much, but after several hours I was entirely hooked! 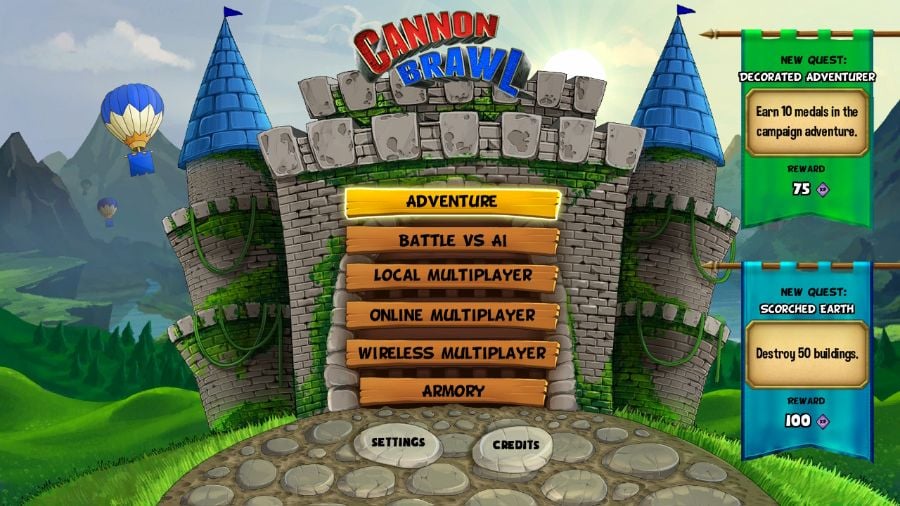 The gameplay is superb, with increasingly difficult missions that start off incredibly simple and ramp up to downright frantic. Choosing from 11 characters there are 57 medals to achieve across 20 action-packed stages, as well as 10 mind-bending cannon puzzle stages to complete. Initially, you play as the Princess, but gradually you unlock new characters with specific nerfs and buffs. For example, the Princess has a cooldown of 15% faster than the norm, whereas the Minion has reduced fall and terrain damage stats, and the driller has a handy special "Blast" move that charges up every 75 seconds. Choosing the right character for you determines the style of play you will undertake. I immediately gravitated toward the Prince due to his buff of repairing buildings when in range, as I thought this would be beneficial to my gung-ho style of balls-to-the-wall gameplay.

Just like Worms, you have a team vs team approach, however, it's up to you to "populate" that team. Upon loadout, you can choose your preferred selection of armaments and weaponry to use during the upcoming stage, and depending on what you choose you to have to save up your hard farmed gold of diamonds to pay for them out the gate. Starting from your fortress on the left side of the level, you have a very small area to work within, your claimed territory. To the right of the screen, you see your AI enemies getting on with their strategy and prepping to decimate you in their red highlighted territory. Your cheapest and most base action is to send a hot-air balloon forward to the edge of your existing colony to gain a little more and expand your controlled environment.

Each time you want to forge forward you have to effectively use the balloon to scout forward to the edge of your regional bubble and plant it there to reveal a new area that you then control until it's destroyed. If your balloons area revealing radius falls on a gold or diamond deposit, you can then set up a mine on that area within your blue zone. Mining more areas at once accelerate your gold reserves and increases the number of loadout weapons or armaments you can then build. As resource management/farming items go this is child play, it is just a matter of concentrating on not allowing your enemy to destroy your balloons and force back your territory, you need to own it all in order to pwn it all. 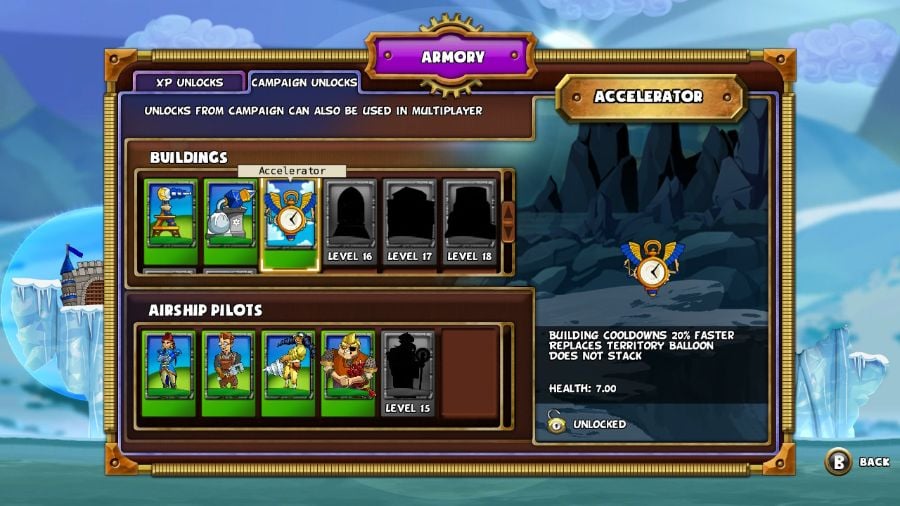 Using my dextrous fingers I swiftly learned the pattern of setting up a series of balloons, setting up mines, establishing shields and forging ranged artillery ready to attack first. Every game I tried, as long as I didn't procrastinate or take my eye off the ball; I could kick ass within seconds gaining valuable land first and mining it to oblivion to fund my arms race. This was however until the enemies started out with more weapons than I did. After 15-16 stages I noticed the difficulty increase a little more sharply than before and it was a race against time to get something, anything in place in order to defend myself before I could plan any attacks.

Using the Prince, I could use him to repair any collateral damage I incurred whilst forging my territory, and firing up a missile battery or a giant laser death ray rather than a single-barreled cannon to cause maximal devastation. Deploying mines on diamond deposits multiplies your earnings exponentially; meaning you can build faster. However more often than not, the valuable assets fell slightly closer to my foes than myself; hence, there was undoubtedly an area of land that was about to be under siege. The frantic nature of these frays is intense. I really enjoyed the feeling of having to monitor all my resources, and offset each one in order to maintain a rhythmic assault on my enemies. Fire one off to destroy their shields, upgrade it, move to the other, fire it off to direct hit their fortification or repair tools and bingo; I had them cowering in the corner very quickly.

My main loadout consisted of mines, a missile battery, a laser, a cooldown accelerator and a shield. With this combination, I found myself very well off in terms of readying myself for battle, but it all came down to obtaining funds quickly to implement them. Learning to balloon around quickly is key and choosing an appropriate character allows you to exploit either defense while gaining traction, or minimizing the time between ballooning so that you could expand your range more quickly. As frantic as things get, never neglect your shielding! Sometimes it can be accidentally handy in deflecting enemy lasers and causing them to damage themselves with the ricochet! Defense is the strongest offence, unless your fast, like me, in which case fast offensive trumps slow defenses depending on your strategic ability.

In addition, you also have online multiplayer so that you can pit your wits against real human intelligent opposition. It's definitely more challenging playing against a real foe, but if you have your strategy drilled down and your senses about you, you can definitely kick ass online the majority of the time. Just keep an eye on each of your items cooldown/recharge timers and remember that you can't do anything without protecting yourself and obtaining money with which to buy bigger assets than your opposing forces. 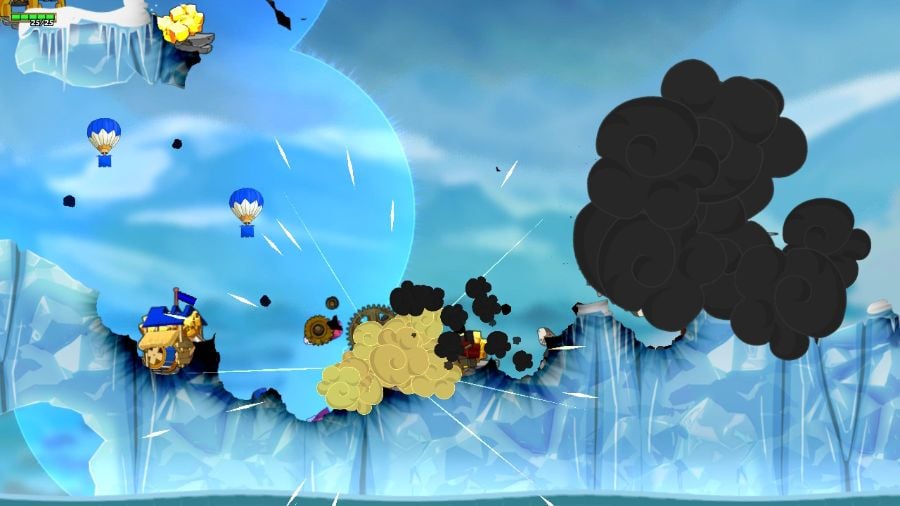 Cannon Brawl is a master class in strategic action and has really changed my perspective on games that look this simple on the surface. I'm thrilled to have been able to get the opportunity to review this one as normally I feel that I would have overlooked this sort of game and not given it a chance. The reality is that this game has layers, like an onion, and it just keeps on giving. With heaps of characters to unlock and plenty of zany weaponry to obtain there is a heck of a lot of fun to be had in this cartoony strategy title. If the graphics were a little more stylish, it might have a bit more appeal to casual gamers such as myself. But other than that, the in-game graphics and sound effects are perfectly compelling enough to want to play for quite literally hours on end.

What We Liked ...
What We Didn't Like ...
9
Gameplay
INCREDIBLY fun to play RTS gameplay that never ceases to pile on the pressure. If resource management and strategy is your thing, then this is definitely one to jump into even if you're a relatively casual gamer.
7
Presentation
Graphically it is nicer in-game than in the rather flat story mode sections. I cannot stress just how fluid and fun the core game is. It's an absolute joy. However, the story feels a little cliche and superfluous to the gameplay. The levels have plenty of particle effects and heaps of things going on at once and it looks superb in action.
9
Lasting Appeal
With a rather short and sweet story mode bolstered with an AI Battle mode, online and local multiplayer, and puzzle stages to complete; Cannon Brawl has plenty going on for the astonishing price tag of just £8.99!
8.5
out of 10

Cannon Brawl is a fantastic mix of resource management, farming and fighting. I particularly liked the frantic race to gain supplies to outgun your foes. I would normally have looked the other way with this kind of game, but I had an incredibly good time playing this and the hours just flew away whilst I was completely absorbed.
Reactions: raxadian, TSP184, smallissue and 3 others
Share:
Facebook Twitter Reddit Pinterest Tumblr WhatsApp Email Share Link
Seems like a game I might try.
Reactions: KiiWii
Definitely better that new Worm games then again ia not like new Worm games are any good.
Looks like a mobile game