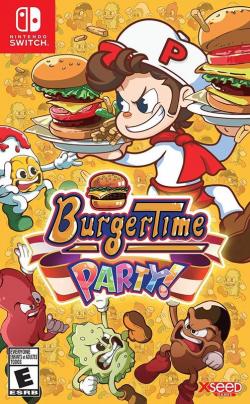 BurgerTime Party! is a reboot of the arcade classic BurgerTime releasing exclusively for Nintendo Switch. Does it cut the mustard or spread itself too thin?

​
BurgerTime Party! is the second attempt to revive the 1982 arcade title BurgerTime, following 2011’s BurgerTime: World Tour, which debuted to mediocre reviews and complaints that too much had changed. With BurgerTime Party!, developer G-Mode has clearly taken these concerns to heart and delivered core gameplay that is strikingly faithful to the original, but with several game variants and updated visuals. Unsurprisingly, not adding anything to the basic mechanics while trying to expand what’s done with them leaves the game feeling pretty meager.

You play as chef Peter Pepper, guiding him through a day of burger-making while trying to avoid hostile, sentient hot dogs, pickles and eggs. Every level consists of vertically layered platforms connected by ladders littered with hamburger ingredients. Peter must run across the ingredients to knock them down a floor, eventually getting all the ingredients onto the plate waiting below the stage. There are three enemies trying to stop you, each with their own unique attack patterns; Mr. Hot Dog attacks head-on, Mr. Pickle tries to get behind you until he’s close enough to strike, and Mr. Egg runs around chaotically. If you drop an ingredient while the Food Foes are standing on top of it, it will drop an extra floor and give a significant score boost. You can also drop ingredients on top of the enemies to kill them, or stun them with a black pepper shaker. 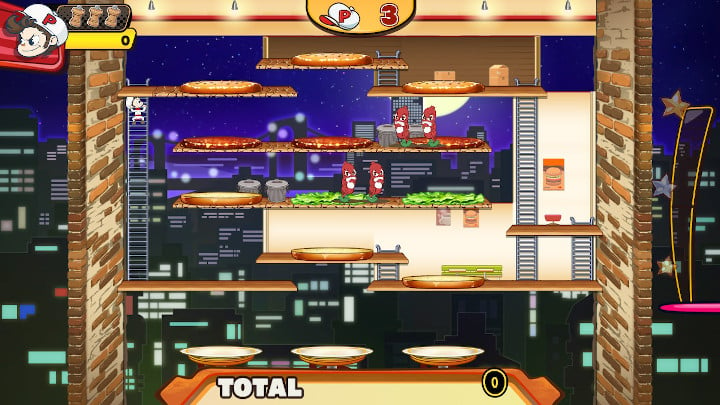 ​
BurgerTime Party! tries to wring four different game modes out of this basic formula, with varying degrees of success. The most unique one is Battle Burger Mode, a competitive mode where players can play as either chefs or Food Foes. The other change to this mode is that the Food Foes gain the ability to charge forward and nullify the black pepper attack. Other than that, this plays like any other game of BurgerTime, with the chefs trying to make burgers and the Food Foes trying to catch them. But without the rigid predictability of the computer-controlled enemies, it becomes clear how stacked the odds are against Peter Pepper. Peter dies from one hit, and his one defensive move is eliminated by the dash attack. A human player has no reason not to charge as soon as Peter is close enough, and even if they get hit by the black pepper’s superior range, Peter is then vulnerable while his meter recharges. That’s not to say every game will be a slaughter on the chefs, but there’s just not enough tools here to let you experiment or try different strategies. After playing a few rounds, you’ll have seen basically everything this mode has to offer. Not helping is the fact that there are only five stages, and since matches are so short there’s no opportunity to get properly invested. When you find yourself back at the stage select screen every couple of minutes, trying to decide if a new stage might inject some energy into the game, it only serves to emphasize how scant the offerings here are.

The other two new modes are fairly similar; Solo Burger Mode and Main Burger Mode. Both present you with unique levels and set score goals, with bronze, silver, and gold medals to be awarded. Their only real difference is the number of players they accommodate and how that affects the level design. Main Burger Mode lets you play cooperatively with 1-4 players, so it gives you large maps and plenty of enemies. This means that tackling Main Burger Mode alone often leaves you feeling overwhelmed, but multiplayer has its own share of problems. The Food Foes don’t present much of an obstacle in this mode for a variety of reasons, so simply passing the levels isn’t much of a challenge. Like any good arcade game, though, you are encouraged to go for the high score, which is when you realize how annoying it is to have another player around. The main way to score points in BurgerTime Party! is to drop ingredients with as many enemies on them as possible, so you spend most of your time herding enemies to where you want them. Every other player on the screen draws the attention of the enemy away from you, breaking up the herd and making it much harder to get the big combos. You’re also not awarded extra points for completing a level quickly or without losing any lives, so the scoring system seems to want you to play methodically while the game is designed to make methodical play as frustrating as possible. It’s the rare co-op game that’s easier to play alone, not because of a quirk in the scoring or difficulty curve, but because the other players are fundamentally not supposed to be there, made even stranger by the fact that the level design seems to be nudging players away from solo play. This mode does have relatively low score thresholds to get a gold star, compared to the more punishing Solo Burger Mode, but that’s really just a Band-Aid to cover up the problem without addressing the core issue. Solo Burger is better just because it has a more solid focus. It works like a puzzle game, usually with one specific way to lure enemies onto the ingredient before dropping them, and they usually leave very little room for error. It’s perfectly serviceable and there are some clever puzzles here, but with most of the other issues stripped away, it becomes apparent that at its best this mode is a sheep-herding minigame. You’ll be able to figure out the solution to a puzzle just by looking at it, but the process of actually finishing it - standing equidistant from every enemy to crowd them together, spacing and timing things right to drop the ingredient with them standing on it - is just too similar every time for it to be worth dealing with. 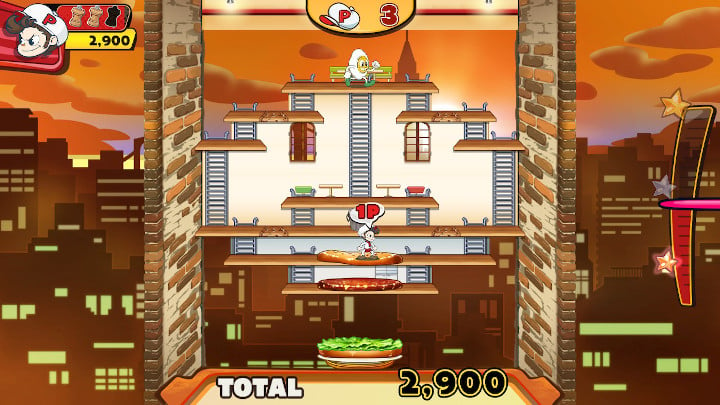 Mr. Egg walks in a random pattern, and this level requires you to get him in a specific spot. It took about a minute for him to find his way down to where I needed him.​
The only mode that really works is Challenge Burger, which works the same as the arcade game these mechanics were designed for. You play through a looping series of levels, with a limited number of lives and pepper shakers, trying to survive as long as you can and rack up as many points as possible along the way. It functions like many other arcade games from that era, but the fundamentals are solid enough to still be enjoyable today. The Golden Age of Animation art style is great, with expressive characters and vibrant colours. This is also the only mode where the multiplayer feels welcome since the emphasis is more on survival than precision attacks on the enemy. While this mode doesn’t justify the missteps the other parts of the game makes, and there are far better arcade options on the Switch, this is the only thing I could see pulling me back if I wanted to zone out and try to beat my high score. 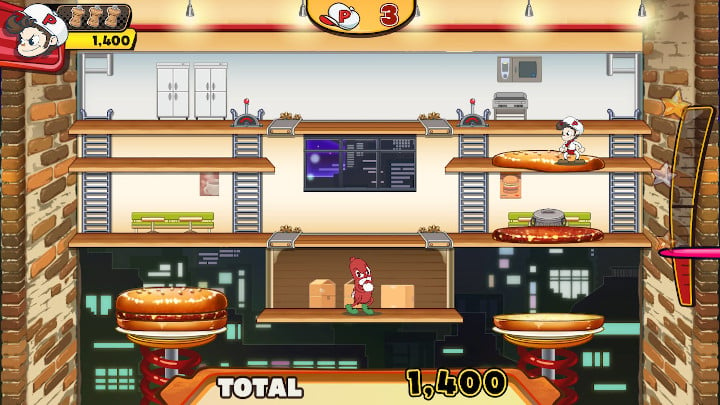 ​
BurgerTime Party! tries to appeal to everyone it can, and constantly gets in its own way in the process. The multiplayer feels shoehorned in because the Switch is popular for local multiplayer without much consideration for if it gels with the game’s core mechanics, but then levels are designed around multiplayer to the detriment of the single player experience. The main modes can’t decide if they want to be manic or strategic, and the attempts to compromise leave both approaches feeling completely unsatisfying. The only time the game really works is when it completely apes the original, but with the original still available elsewhere, BurgerTime Party! Is left feeling useless and forgettable to all but the most diehard BurgerTime fans looking for a fresh coat of paint.
Verdict
Reynardine, T-hug and Scarlet like this.
Like this review