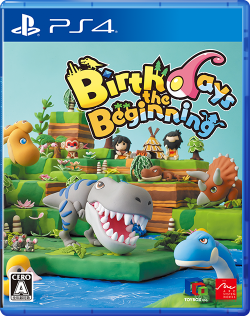 Single player
Local Multiplayer
Online Multiplayer
Co-operative
Birthdays the Beginning is a sandbox simulation game created by Yasuhiro Wada, better known as the director and creator of the Harvest Moon series. Focusing on terrain building and evolutionary-esque creature management, Birthdays The Beginning is an immense and complex title.

A Cube-Shaped World Builder? Never Seen One of These Before!

Birthdays the Beginning starts off with a little storyboard about a young kid checking out stuff in a library. While looking around, he finds a map hidden away in a book and decides “yeah let’s go to that X on it! Surely nothing bad will happen!” So he does, he gets knocked out and sucked into a cave against his will, and then we start the game! Already off to a good start. When you awaken, you discover you’re in a weird, blank cube world (no, not the cool Picorama game that died :() with an annoying little sprite following you around! Gosh, I hope this isn’t another Navi situation! The sprite introduces itself as...Navi...and explains the basics of the game. Oh. They had to include this tiny little sprite that follows you around, interrupting you with "hints" and gameplay tips every now and again to "help" you along the way. Wooo Navi. Anyways, onto the gameplay.

The idea of Birthdays The Beginning is in terraforming this blank cube world in order to allow life to evolve, some requiring a certain elevation present to evolve, some require a certain temperature, some require different water depth etc etc. There are two ways to view the cube world you’re put into, a “Micro View” which is where you can change the terrain and explore your world, and a “Macro View” that acts as an overview, HP recovery, and a way to pass time in your world. Macro View also shows you the various stats of your world like how many of each species of creatures are alive, the ambient temperature of your world, the percentage of plants vs animals, and the percentage of land vs water your world is made up of.

Micro View is where the bulk of the gameplay lies; you can adjust the terrain by increasing and lowering elevation points, use items to change the terrain in various ways (like adding a river source or changing the moisture content in a piece of land), or to simply recover your “HP” which lowers as you build. Increasing elevation lowers the ambient temperature and lowering the elevation increases it, and there’s a sea level which automatically “spawns” water at a certain elevation. As you change your world, various creatures will start to randomly spawn in and “evolve” depending on how your world is terraformed. The tutorial goes through several different examples of evolution, from single celled organisms that spawn initially to multi-celled organisms, to water-based plants, to land based plants and eventually to things like fish and land animals. So y’know, basic evolutionary principles. As you play, you’re asked to “capture” each new organism you create to add to your Library, which is basically a log of all the species you've encountered. There’s a first person camera mode called View Mode, which allows you to move around your world in a first person view, that is supposed to help you discover these new species you spawn in...but the controls are so sensitive and you move so quickly that it sort of makes it impossible to move around your world to actually find the tiny species. 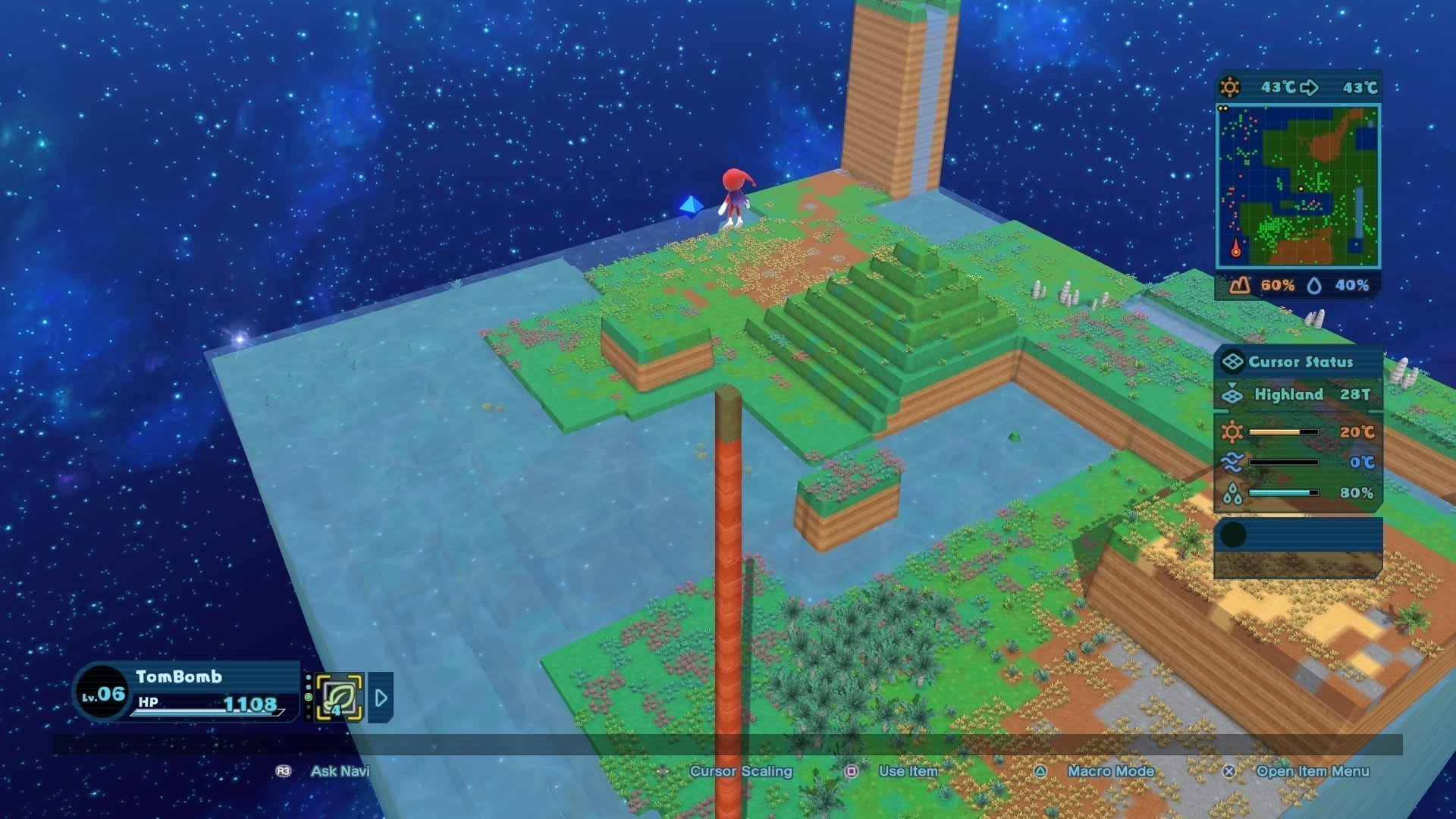 Unfortunately for Birthdays The Beginning, this is absolutely as boring as it sounds. While the general idea of terraforming an entire world seems pretty great, the game progresses so slowly and you’re limited to such a small cube in the beginning that it kind of makes it difficult to really sit down and play like you would other world builder games. My first play session lasted about 2 and a half hours and the above is basically as far as I got, and I was really rushing through the game. The story is separated into “Episodes”, each one requiring certain evolutions and aspects of your world to be created before you can move on. As you complete each episode, your world does grow a bit larger, but the slow gameplay and the rate it grows simply discouraged me from playing for long stretches every time I tried to play it. There are also a few gameplay elements that were included just to make the gameplay seem not so "one-dimensional", and unfortunately these additions mostly harm the game rather than enhance it. HP, for example, is one of the more annoying gameplay mechanics that made its way into the game. Instead of being able to just constantly build your world however you want, you expend HP as you increase or decrease elevation, and once that HP drops to "0" you have to completely stop what you're doing, go into Macro view, and pass time until your HP is restore. This basically interrupts gameplay every minute or so, and becomes increasingly annoying when all you want to do is build a giant mountain range or dig a giant trench in the ocean floor. 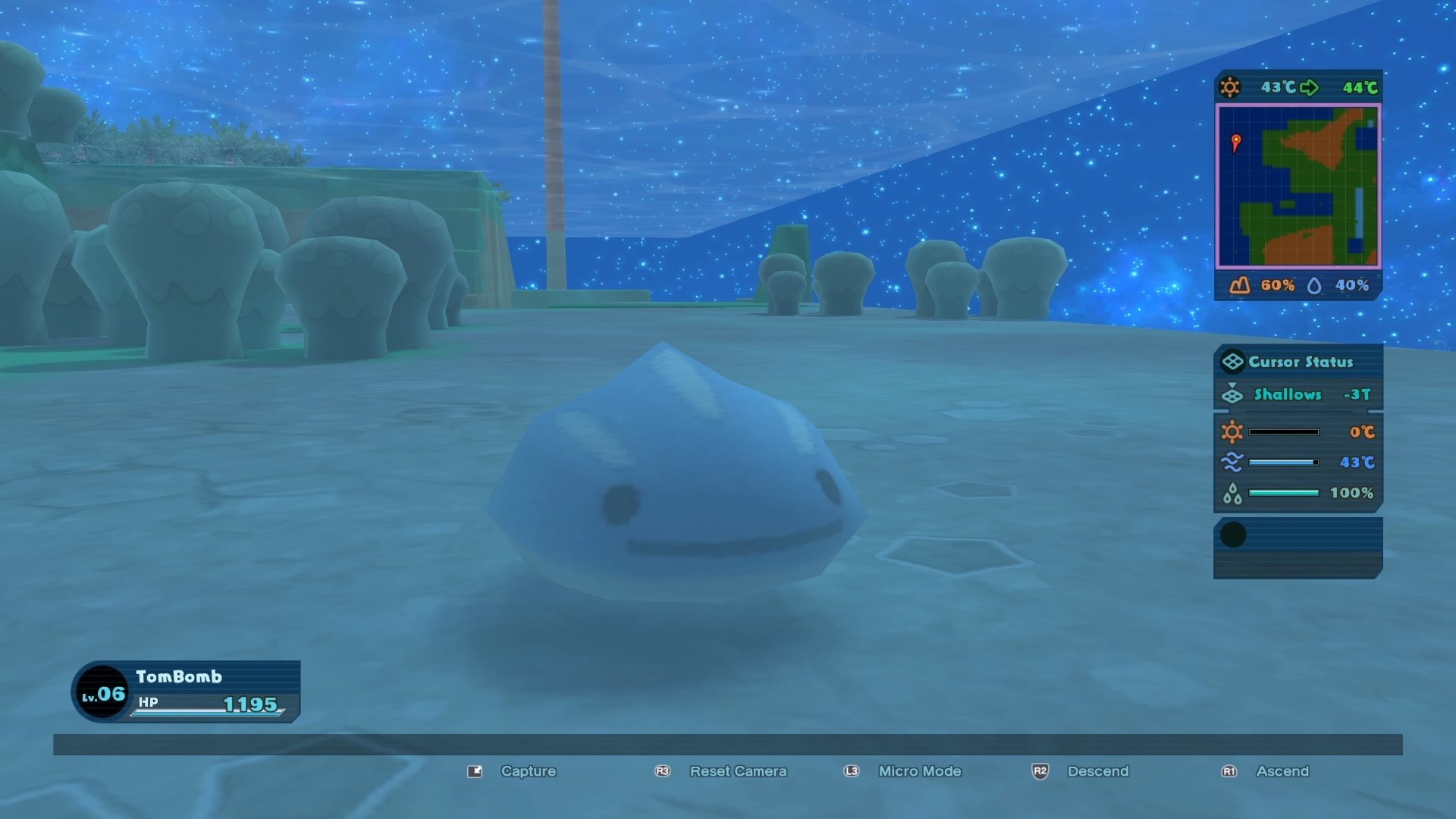 Look at my happy fish!

What We Liked ...
What We Didn't Like ...
5
Gameplay
Unfortunately the gameplay has a lot of little problems that stop the game from being truly enjoyable. Things like limited building time, small worlds, and poor pacing really ruins what promises a fun world building experience.
7
Presentation
Presentation-wise the game looks pretty good. It does seem a bit lacking visually in the beginning, but as time goes on your world does develop into a pretty good looking cube. Unfortunately, I'm knocking some points off because of it's cube-aspect. With games like Minecraft and its dozens of clones around it feels sort of lacking.
8
Lasting Appeal
Despite being super slow, the game shows a large amount of replayability. Each episode has various objectives that you can complete and there appears to be a huge number of creatures you can create and evolve over time.
7
out of 10

Overall, Birthday the Beginnings is ok. The number of species you can create and manage promises a lot of gameplay, if you can get passed the poor pacing and intermittent gameplay. The cute animals (like that fish <3) makes the game pretty worthwhile, too.
Reactions: TheKawaiiDesu, shaunj66 and T-hug
Share:
Facebook Twitter Reddit Pinterest Tumblr WhatsApp Email Share Link
I think these sorts of life sims are a bit like mech games. That being theoretically something I should like, and want to like, but there is always something preventing it from getting there. Most times, for life games, it is the jack of all trades problem but here it sounds like the lesser seen, and more annoying, failure to allow me to fiddle pointlessly, but enjoyably, for hours on end, only to have my fiddlings go extinct because I hosed something up.
So about as good as Breath of the Wild, right?
wish i had a ps4 i played spore on pc loved it if i had a ps4 might give it a try
it looks so cute *_*
@chrisrlink the game is also available on steam. It's cheaper there as well.
So the world is a place formally known as Cuba? Anyone get the reference