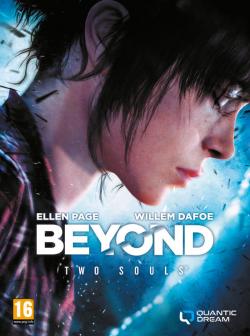 After a timed-exclusivity period on Epic Games Store, Quantic Dream’s titles are now all available on Steam. While I previously reviewed the PC versions of both Heavy Rain and Detroit: Become Human, I now turn my attention to Beyond: Two Souls in this review.

After bringing 3 of its major titles to PCs for the first time last year as Epic Games Store exclusives, Quantic Dream expanded its reach by making them available on Steam recently. While I reviewed Heavy Rain and Detroit: Become Human last year, Beyond: Two Souls was the only game from the set to brace PCs that I didn’t review, until now.

Having not played the game myself before, I thought it would position itself somewhere between Heavy Rain and Detroit. After all, that’s the chronological release order for Beyond: Two Souls; after Heavy Rain and before Detroit. Moreover, with Hollywood stars Ellen Page and Willem Dafoe as main characters and music produced by Hans Zimmer, this game is sure to attract attention. However, it’s another story in execution.

We’ll get to that in a bit, but first, let’s familiarize with the plot. Beyond: Two Souls tells the story of Jodie Holmes, portrayed by Ellen Page, across 15 years of life. We experience her grow first-hand from a timid child through an emo teen to a deadly CIA agent. However, the plot goes beyond that of a regular coming-of-age story; because Jodie is no regular individual. 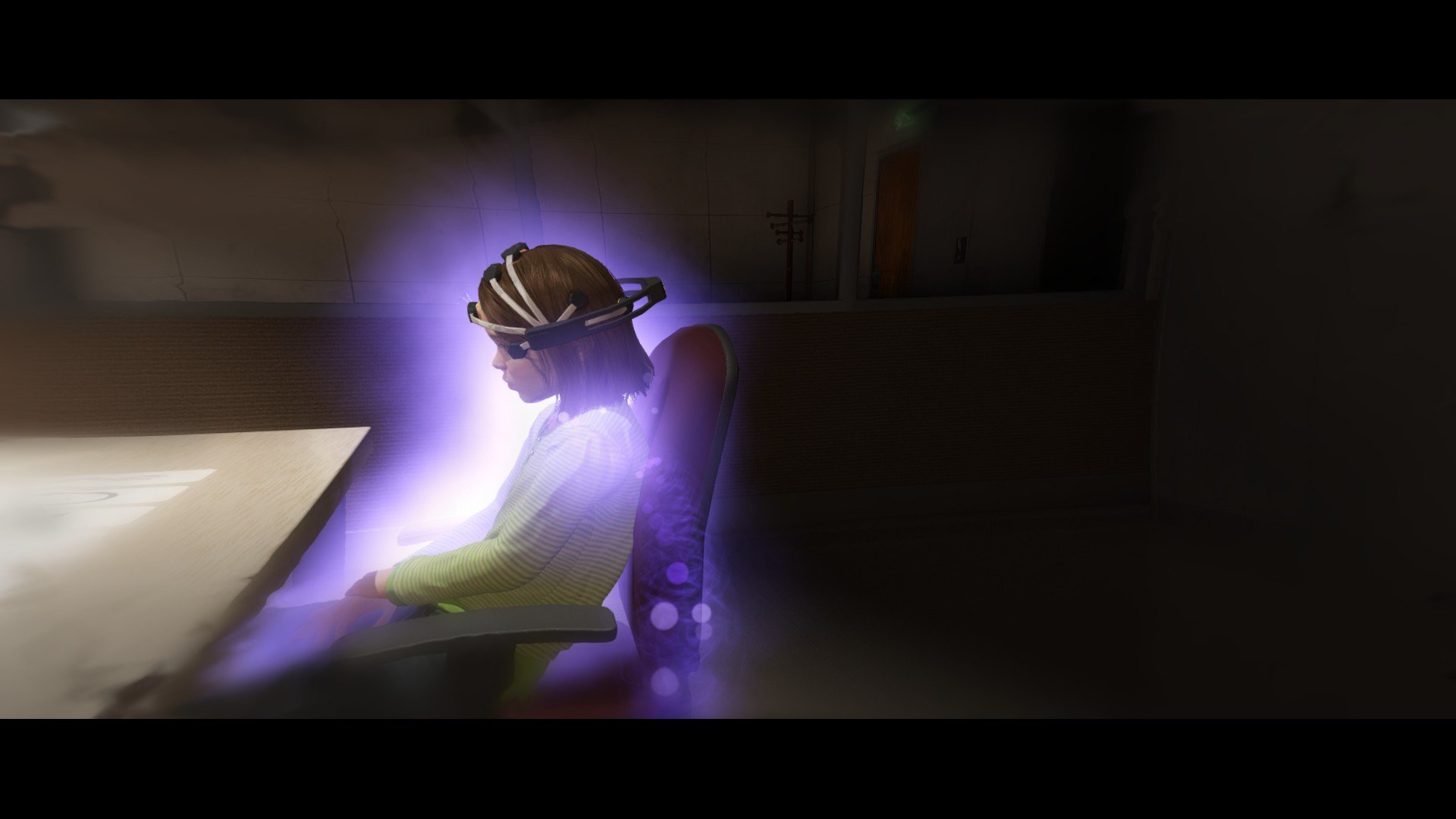 Since birth, she has been unexplicably tied to a mysterious soul, or entity, of some kind. The latter, named Aiden, can even interact with the actual world to his own will or in response to Jodie’s command to move things, heal injuries or even attack and control others. Given her unique ability, Jodie’s parents consulted with the Department of Paranormal Activities (DPA) to better understand her condition. That’s where Jodie makes the acquaintance of Nathan Dawkins (Willem Dafoe), with whom she develops a strong bond.

However, Aiden is not the only entity that Jodie comes across and she learns about the existence of other entities from a young age. While Aiden is of the helpful kind, other entities aren’t as well wishing. They are, in fact, downright capable of killing humans and wreaking havoc in their passage. Of course, the potential of entities for military ends or the exploitation of the Infraworld where they originate aren’t left out by the DPA, which is itself under the CIA’s command. And the Infraworld is not gaining the attention of only the CIA but also that of foreign actors. Amidst all this political turmoil is Jodie who is herself struggling with relating to the world around her while being tied to another world beyond regular folk’s comprehension. 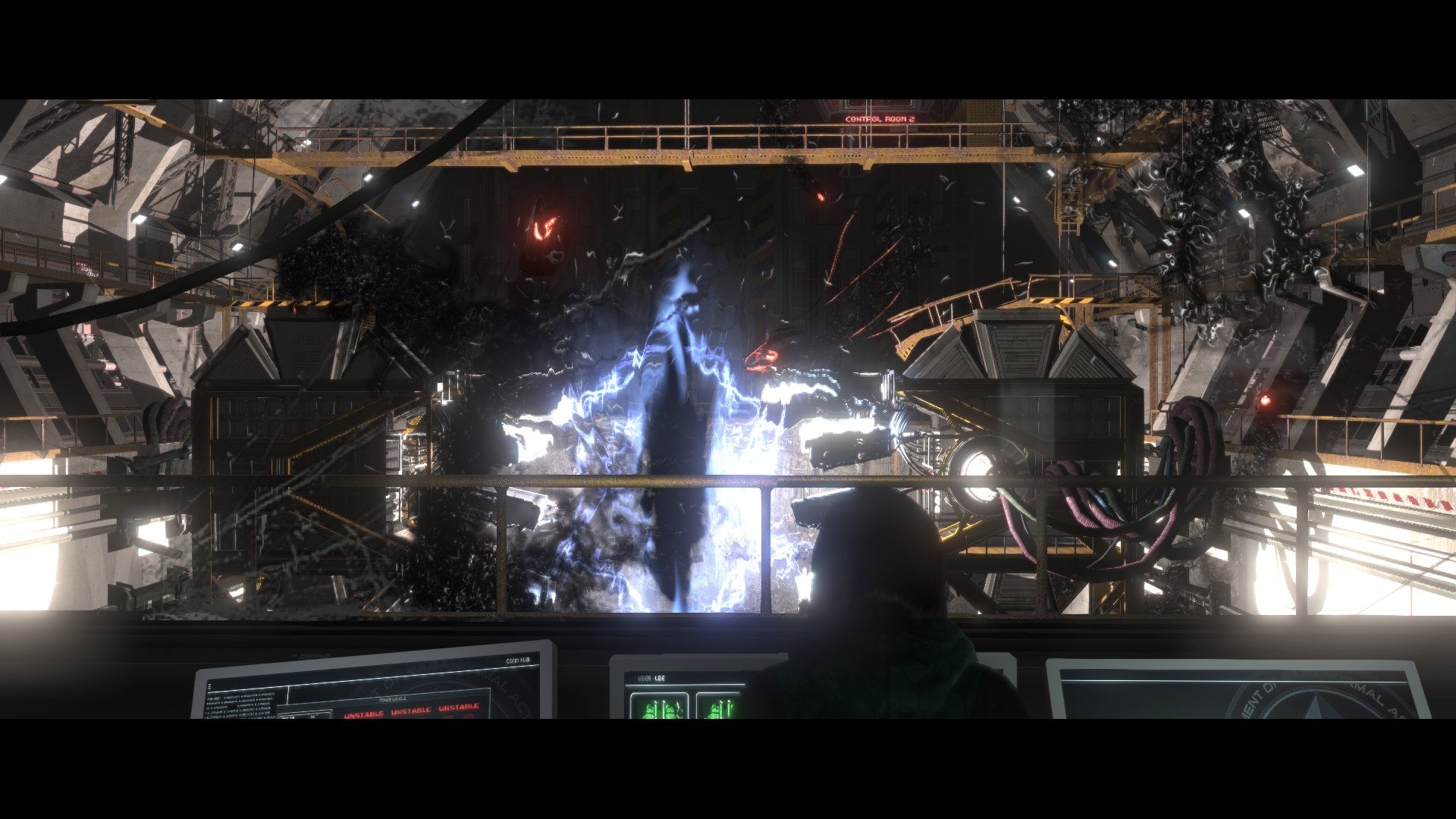 Beyond: Two Souls is first and foremost Jodie’s story which we experience first hand in diverse points in time. In its original depiction, the plot jumps across the timeline; meaning in one chapter you could be playing infant Jodie and at the next, as full-grown CIA agent Jodie. It can get confusing at times, building the tension and excitement of a manhunt at one point, only to dissipate it all in the next chapter by going back in time at a more benign point. However, this nonlinear execution helps in building the intrigue regarding the events that brought Jodie to that certain situation in the future. However, the game also features a “remixed” mode that plays in a chronological order should you wish to follow it this way.

Nevertheless, while the depiction of our protagonist and her relation with the omni-present Aiden allows us to relate to them, the same cannot be said with the other cast. Jodie’s love interest seemingly builds out of nowhere in a character we barely know. Nathan’s arc, although expertly portrayed by Willem Dafoe, does not flow consistently, with several chapters devoid of the character and a later reunion that feels rushed in his character progression. Similarly, other characters are also poorly developed, leaving only a fleeting sense of attachment to the player, even if they play major roles in Jodie’s story. This is also reflected in the decisions you take regarding these characters. Should you rescue that person or focus on your safety? Should you help this acquaintance or lie to them?

While the game gets you to face crucial choices about several NPCs, the weight of the ensuing consequences aren’t fully felt due to the poor relation the player has. This is an important aspect of a Quantic Dream game as the difficulty isn’t usually portrayed in the gameplay itself but rather with the choices you face. In Beyond: Two Souls, the moral conundrum isn't portrayed as successfully as in the company’s other titles.

Thankfully, the professional acting of the main cast are highlights of the gameplay experience, revamping the often dull conversations and one-liners and giving some personality to otherwise unrelatable characters. This is also supplemented with the motion capture that emulates a cinematic feel. Additionally, the music score produced by Hans Zimmer supports the game’s atmosphere throughout, whether its a tense escape in the woods, a head-on offense against entities or a stealth operation. 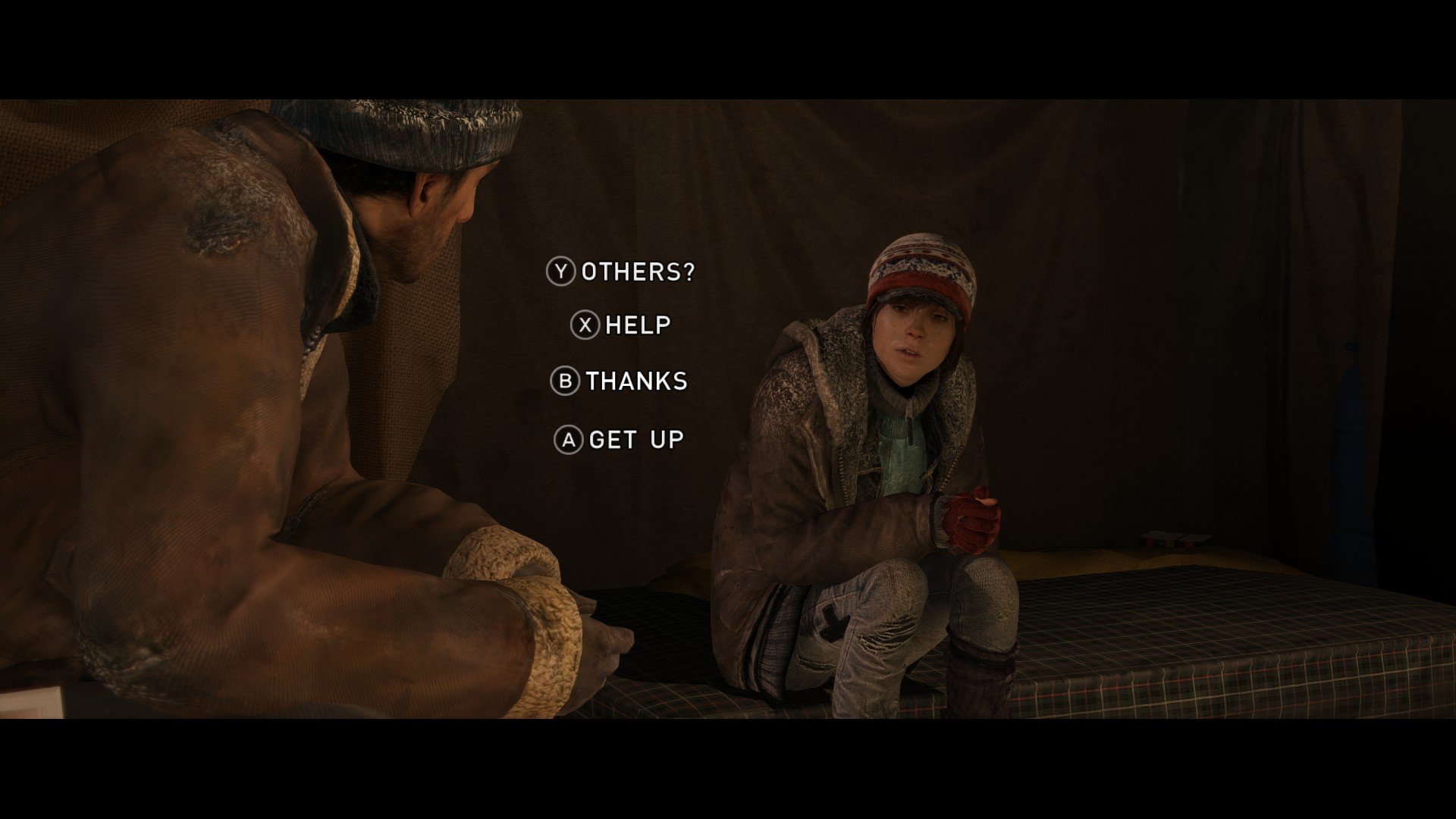 Beyond: Two Souls decidedly differs from the other two Quantic Dream titles in that it deals with the supernatural, an aspect foreign to both Heavy Rain and Detroit. It’s an original premise that grasps one’s attention and shows the breadth of narrative diversity that depicts Quantic Dream’s ambition. Fans of narrative-driven games will tend to want to see how Jodie's story unfurls as the Infraworld and the real world converge, and her pivotal role in it. However, given that it is a Quantic Dream title written and directed by David Cage, you can expect a narrative-focused experience with divergent pathways based on in-game choices governed by the divisive controls that have become associated with the company.

While I’m myself a huge fan of story-driven games and open to experimenting with novel gameplay aspects (see Telling Lies or even The Outer Worlds), Beyond: Two Souls ultimately felt disappointing, especially compared to the developer’s other titles that I reviewed. Unlike Heavy Rain or Detroit, Beyond: Two Souls felt more of a hand-holding experience rather than a novel take on interactive storytelling. The choices are mostly binary and predictable and I had issues with the controls themselves.

Regarding controls, the developing team mentioned in a making-of video that they wanted to make minimal use of in-game cues, aiming for the invisible when it comes to prompting an action. However, while it makes for a more streamlined on-screen experience, this approach to the gameplay gets confusing at times. 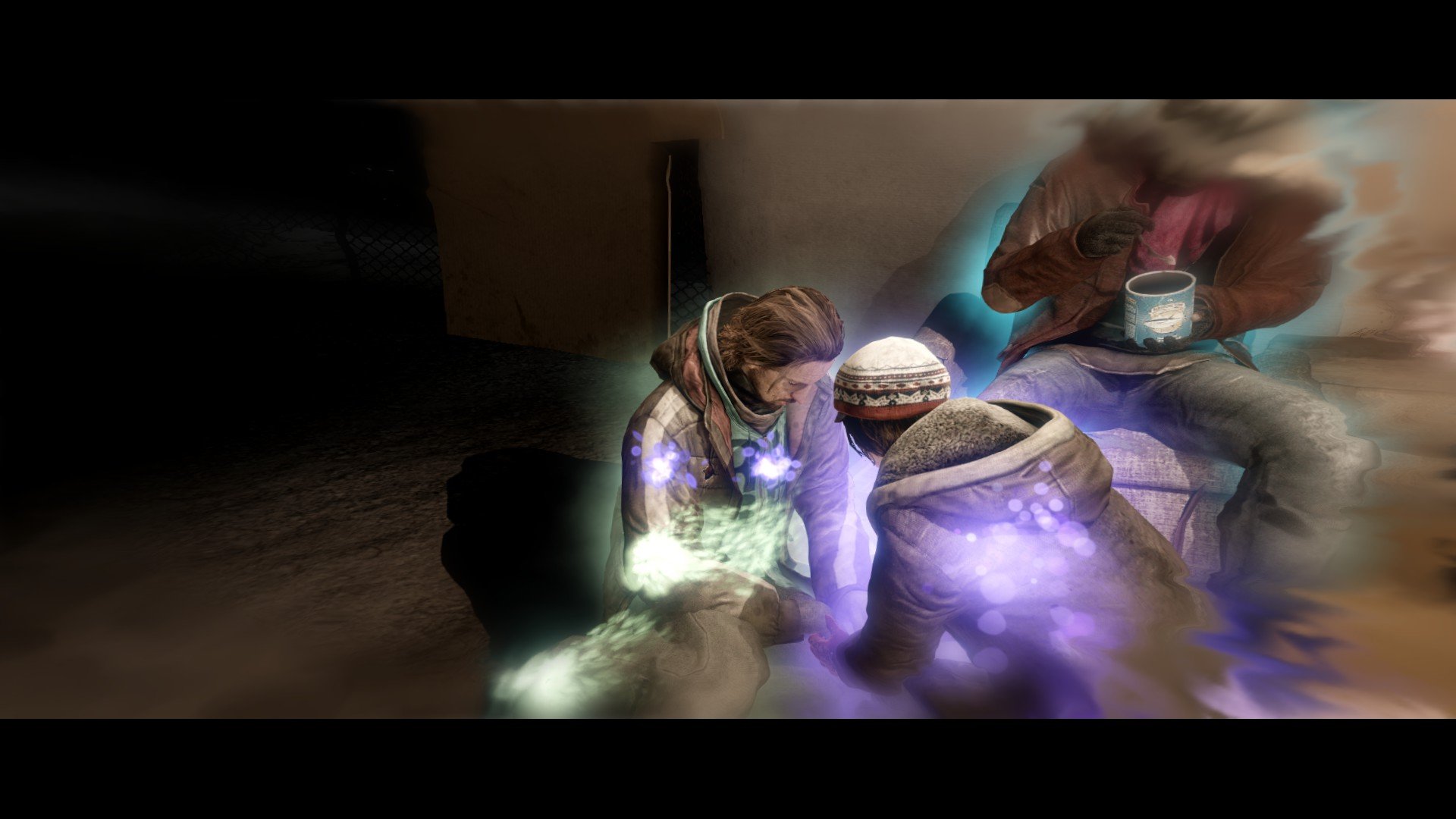 Those white dots that denote that an action is possible simply aren’t obvious enough. I often had to roam around a room or move to another room thinking I was in the wrong place simply because the indicator wasn’t conspicuous enough. This could arguably favor exploration but it’s a poorly executed way to do so. Clearly visible cues would go a long way in these cases.

Commanding Aiden to move things, heal people, create force fields or control enemies relies on other on-screen dots which require twin stick movements in specific directions for the desired action to take place. Here again the controls don’t flow naturally, even if they are meant to be the standout aspect of the gameplay.

During quick-time events I was often confounded as to which direction to tilt the right stick in context. Is Jodie dodging or attacking? Is she swerving left or below? These would require different actions from the analogue stick which would determine the outcome of the situation but the on-screen action didn't always seem intuitive in a satisfactory way. There’s also questionable choices for certain QTEs such as solving a math problem or raging on a guitar. It’s not only that these scenes need the player’s input at all but also that they involve mundane button-pressing rather than elaborate twists of the right stick as I would have expected. 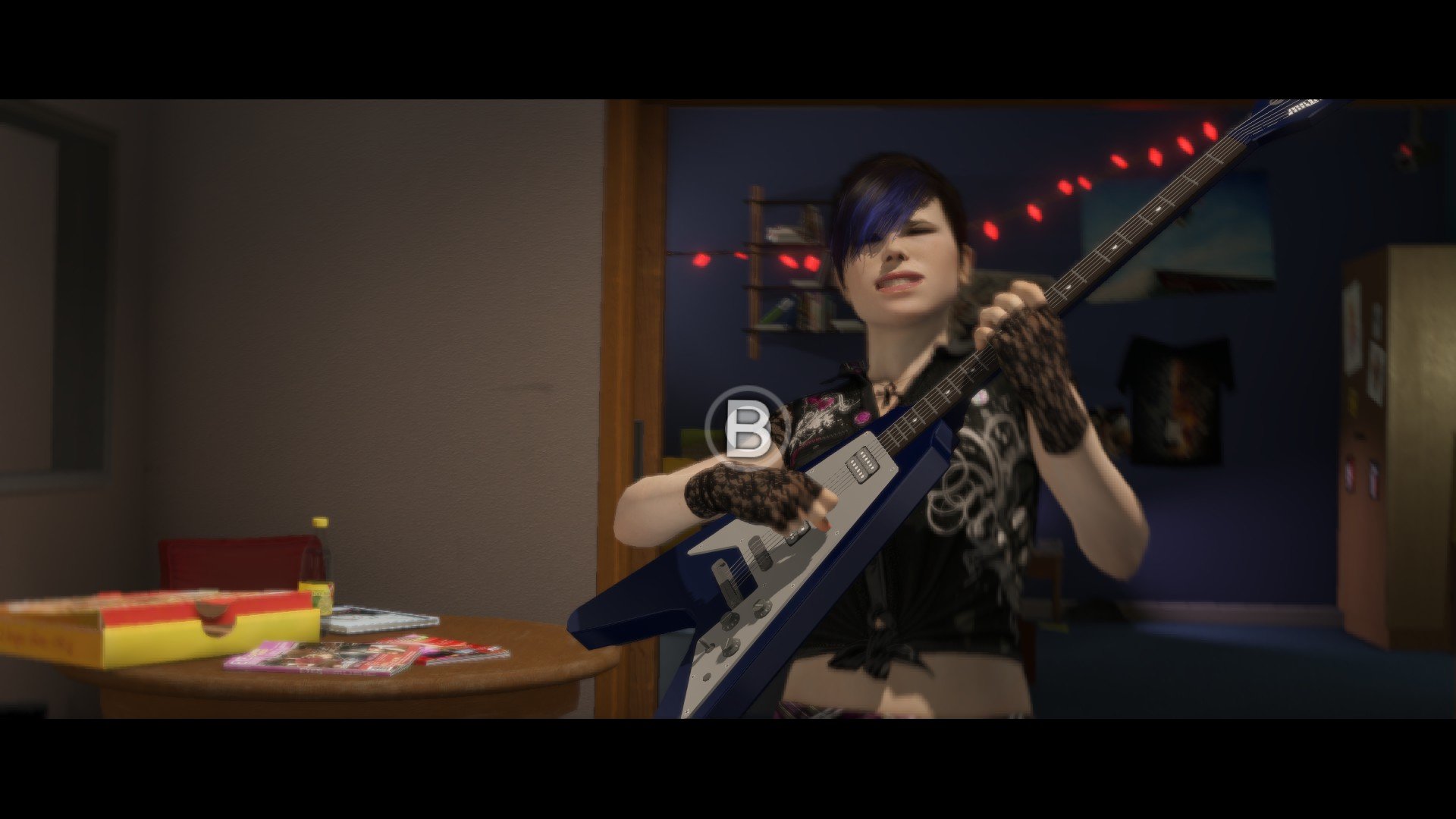 This is not to say that Beyond: Two Souls is devoid of fun gameplay moments. As a fan of stealth games myself, I was really engrossed by “The Mission” chapter, trying to sneak past enemies in the Somalian stronghold undetected and taking down guards unawares alone or with Aiden’s help. At other times, the game gives you control over a motorbike, a horse and even a submarine in order to progress! Beyond: Two Souls also features a diverse palette when it comes to its landscapes. You will control Jodie under the scorching sun in the Navajo Nation, through the DPA’s offices to the frigid lands of Kazirstan. Strolling across those varied, beautifully rendered scenes often helped me overlook the game’s issues.

With the PC release, Beyond: Two Souls also comes with some welcome additions such as support for 4K resolution, widescreen 21:9 compatibility, and 60 fps framerate. However, as the game was released in 2013 and the PC version features somewhat revamped visuals, it’s still a noticeably visually dated game in comparison to newer titles. The ‘Advanced Experiments' DLC is also included which offers a series of puzzles that need to be completed as quickly as you can. It’s a nice-to-have rather than an addition that augments the experience.

Despite a strong performance from its cast, Beyond: Two Souls feels like a let down with unintuitive controls and a script that falls behind with poorly developed characters and dull conversations, despite a promising premise. Even with its branching pathways, the clunky gameplay and lack of relation to secondary characters ultimately don’t feel engaging enough in a way it was designed to be, leading to in-game decisions not having the weight to make a significant impact. 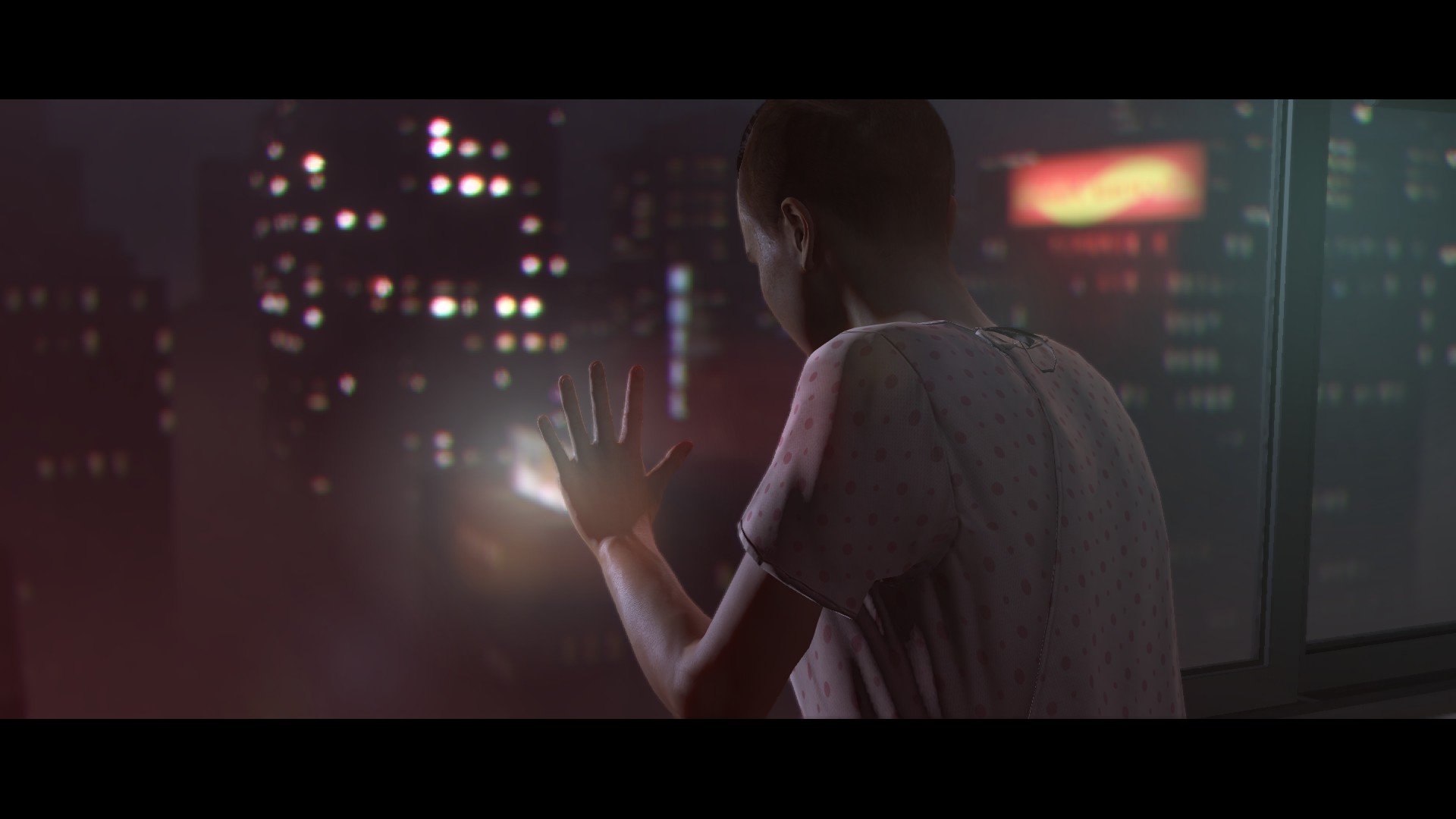