Single player
Local Multiplayer
Online Multiplayer
Co-operative
Battlefleet Gothic puts you in control of a giant fleet of spaceships in order to purge a space sector of dirty heretics. How does this translate to a real-time strategy experience?

A take on the classic RTS, Battlefleet Gothic: Armada is a throwback to the early days of PC gaming. It requires intense strategic planning and maneuvering of an entire fleet of spaceships, all in real time. Every battle is exciting and exhilarating, but is the difficulty bearable in the modern age, or is the game only accessible to RTS veterans?


The setting
The game is set in the Warhammer 40K universe, a series of tabletop fantasy games. Specifically, it is based off of the Battlefleet Gothic scenario, which pits four factions against one another in a battle for control of the Gothic sector of space. In the singleplayer campaign, the player controls an admiral of the Imperium, a large empire which aims to keep control over the entire Gothic sector and destroy any and all attempts to take over its planets. Savage Orcs and the Chaos fleet are the primary offenders, who try to take over planets in search of power and loot. 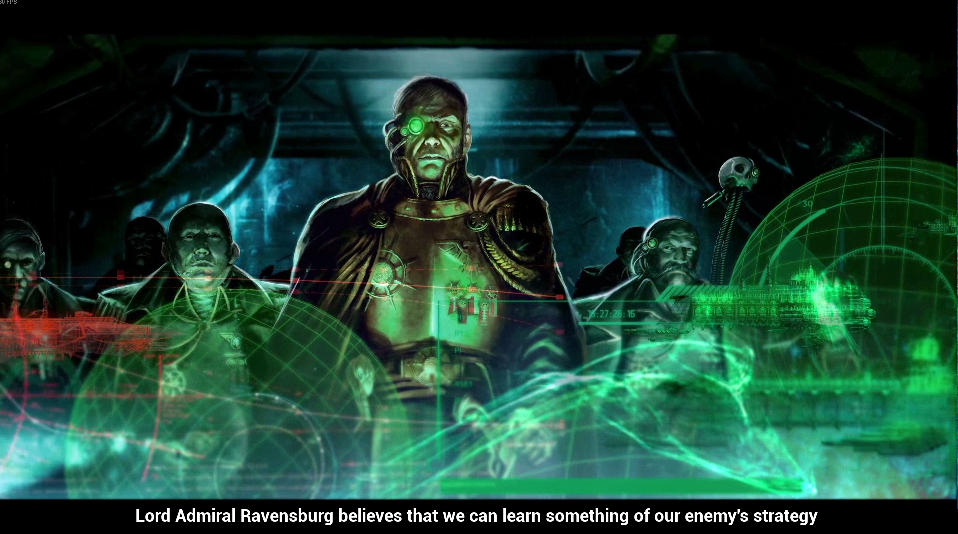 ​
There are lots of different subsectors and worlds to manage; most are initially under imperial control. There is a large emphasis on space lore and history, while the corruption within the Empire is slowly exposed. The fantasy vibe runs strongly throughout the whole game. Expect large, futuristic, highly advanced technological wonders known as spaceships to compose a battle fleet, with alien species at the helm and futuristic robotics abounding.


The presentation
The game runs on the Unreal engine, and looks absolutely fantastic. The models are well made and have a stunning level of detail. Every cannon, prow lance, and torpedo is vividly detailed both in cutscenes and in combat. There is full voice acting in almost every scene. Classic annyoing RTS voiceovers when you give commands are accounted for as well. During battle, the camera is freely controlled, however constantly worrying about the camera position can be quite frustrating during intense combat. A pretty high-end PC is required to run the game at an acceptable framerate, and there will definitely be stutter during cutscenes without a modern gaming PC. Battlefleet takes a realistic, fantasy-like approach with its visuals and pulls it off well. 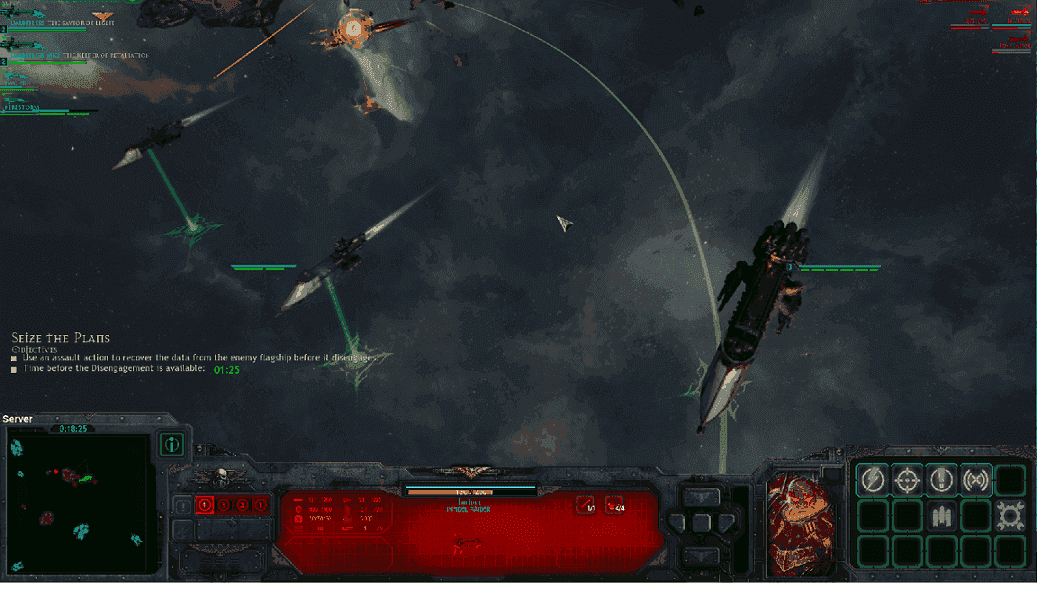 ​
The story is a fairly generic space fantasy. You have your evil empire, desperate space pirates, ancient arbiters, and religious zealots. That said, the story is hardly the center of the game as much as its meticulously designed gameplay. But what sets the story apart at least slightly from other fantasies is the religious aspect it brings to the Imperium. Not only is their emperor a political figure, but also a deity to his subjects, making the conflict more personal and bringing a crusade-like aspect into the campaign. Purging the world of heretics is either a primary or secondary goal of the Imperium's conquest, depending on the point of view. The religious aspect, having grasped my attention, is sufficient to make the story interesting enough to accompany the gameplay.


The nitty-gritty
Like micro-managing, constant planning, intense difficulty, and a strong emphasis on trial and error? Then Battlefleet is the game for you. Otherwise, you're going to have some issues.

Battlefleet is an RTS for RTS veterans. It hopes to bring together the interests of tabletop gaming enthusiasts and RTS fanatics-- not the two most accessible groups in gaming. However, it's hard to argue how well-executed every aspect of gameplay is. The multiplayer community is intense and committed to winning, always. This is a game that really demands full attention and can't be played in any casual manner. But, on to the details.

The singleplayer campaign focuses on managing both a fleet of spaceships and a giant sector of space, constantly battling against uprisings and invasions to keep order in the Gothic sector. At Port Maw, you can upgrade, customize, and purchase new ships as well as upgrading the various crew members aboard each vessel. Renown, the game's currency, is earned by completing missions and can be spent on such upgrades. This management system is roughly turn-based; on each turn, you can go on one mission, e.g. transport convoy ships to a suffering planet, or put down a rebellion. You can also make upgrades to your ship at any point during the turn (obviously not during combat). While certain turns might have story missions associated with them, the ultimate goal is to keep the sector under control and to lose as few planets as possible to enemy forces. 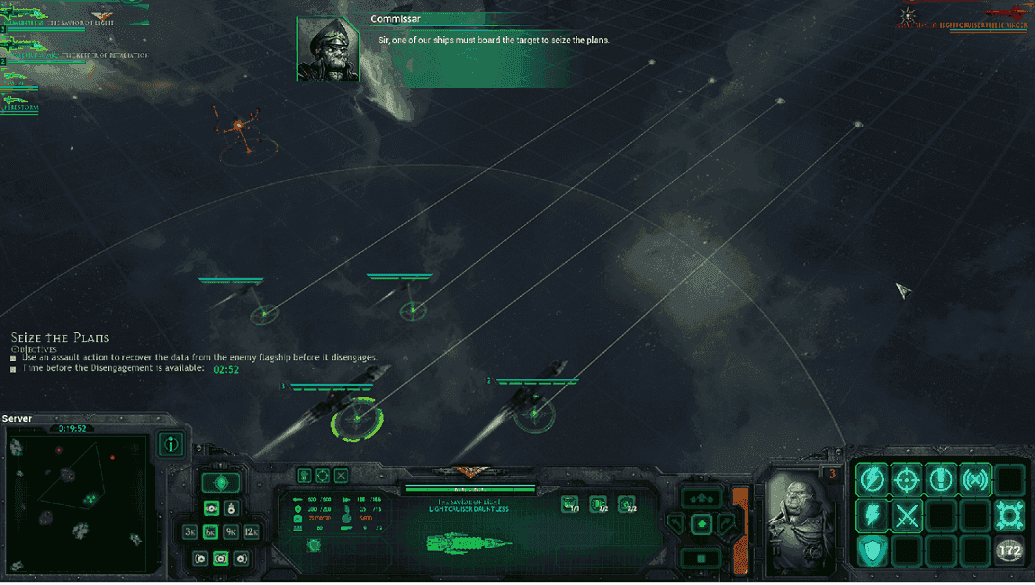 ​
These missions are the center of the game. Each one starts out with up to 20 minutes of time to deploy the various ships in certain sections of the map; there is also an auto-deploy option if this type of planning is too complex (and it often is, frustratingly so). Once the deployment is complete, all the ships in the fleet become independently controllable, with tons and tons of attack options, engagement ranges, maneuvers, and more available to choose from. There is a tutorial at the start of the game which helps somewhat to understand the plethora of commands, however lots of time is required to master these techniques. The goals of each mission are unique; there are escort missions, blockade missions, boarding missions, and tons more. The gameplay has great variety to that extent.

However, managing these ships is nightmarish on higher-level missions. Imagine having over 5 ships to independently control and direct; huge, slow-moving boats which can only go fast or make sharp turns via a limited energy gauge. Many attacking options are available, from missiles and prow lances to boarding and shield disabling. Ships can target specific subsystems to prevent enemies from shooting or warping, a system similar to FTL.

This game is like a palette full of every color known to man, and a blank canvas with little to no inspiration. To a master painter, a magnificent portrait can be created, but someone with only average knowledge of painting would be confused where to even begin. Similarly, RTS veterans and people who spend thousands of hours in this game will have a wonderful time commanding the various ships and planning devious attacks, while the average player will be struggling to find the auto-engage button on all of them. Before you even think about trying this game, you need to know if you a.) have the patience to fail over and over in the insanely difficult missions and b.) actually enjoy playing hardcore RTS games. That said, this is the ultimate blissful game for any RTS fan.

There are multiplayer battles as well, either 1v1 or 2v2. I would advise steering away from this mode entirely until you have mastered the game's mechanics. The matchmaking is effective and quick, but the players are intense and the competition is fierce.

What We Liked ...
What We Didn't Like ...
6
Gameplay
To an RTS veteran, the gameplay is near perfect; to anyone else, it is a confusing mess. That said, it's impossible to argue how refined the gameplay is from an RTS expert's perspective.
8
Presentation
The Unreal Engine has never looked better, and with a solid story and voice acting this game has a very polished presentation.
8
Lasting Appeal
With a lengthy campaign and fantastic online matchmaking, any true RTS fan would easily spend hundreds of hours here.
7
out of 10

@ DEMONGreninjaPG: oooh a talking wii A moment ago
Chat 3