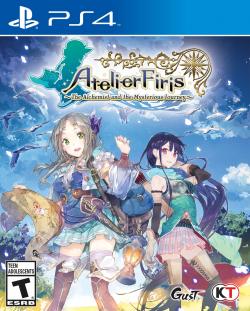 Now totaling 18 games, the Atelier series must be doing something right. Today I’ll once again tread unknown waters to find out what is so appealing to fans about this series.

Atelier Firis: The Alchemist of the Mysterious Journey is the 18th installment in the Atelier franchise, and the second in the Mysterious saga.  It is also the second game in the series to come to Playstation 4, following its predecessor.

The previous title, Atelier Sophie: The Alchemist of the Mysterious Book was a rather drastic shift for the series in terms of game mechanics.  While the core parts of the series remained, Atelier Sophie was much more player friendly to say the least.  While Atelier Firis is not exactly a return to nature, it does mix both classic and modern Atelier mechanics in a very good way.  As a result, I believe that it overall surpasses the previous game, and only other Atelier game that I’ve had the chance to experience, Atelier Sophie.  You can learn more about that game by reading my review of it last year. 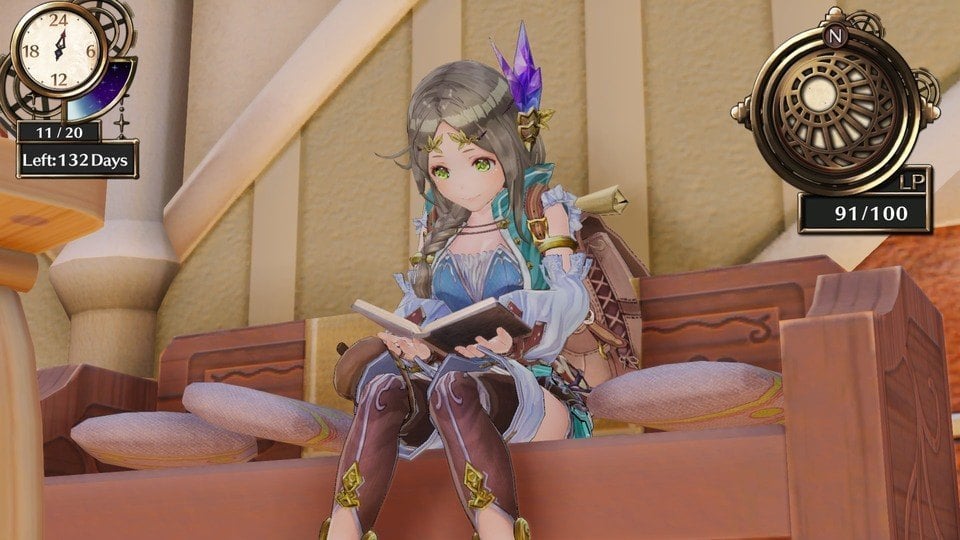 Atelier Firis is somewhat of a sequel to Sophie but it very much stands on its own.  It stars a new protagonist, Firis Mistlud, who lives in a town deep underground, much unlike the last entry.  As a result of spending her entire life underground, Firis longs to visit the surface more than anything else.  Unfortunately, such a wish seems out of reach to her as her parents would never allow her to do something so dangerous.  After all, the surface is full of monsters who wouldn’t hesitate to devour a 15 year old girl.

Like others in the world destined to become alchemists, Firis has a special ability that allows her to determine the locations of various materials by sensing their energy.  This ability is very useful to the villagers in her town who mostly make their livings by mining.

The game links back to the previous title very early on, as Sophie, the main character from the last game, literally, albeit accidentally, destroys the barrier blocking the surface world from Firis’ village.  Noticing that Firis has the innate abilities necessary to become an alchemist, Sophie inspires her to become one.  After all, alchemists can do all kinds of things, such as create medicine and bombs that can be used to safely explore the surface world. Firis is granted permission to leave the village, provided she hones her skills enough to pass the official alchemy exam, coincidentally held in exactly one year.  Now Sophie’s apprentice, Firis begins her journey to becoming a full-fledged alchemist. 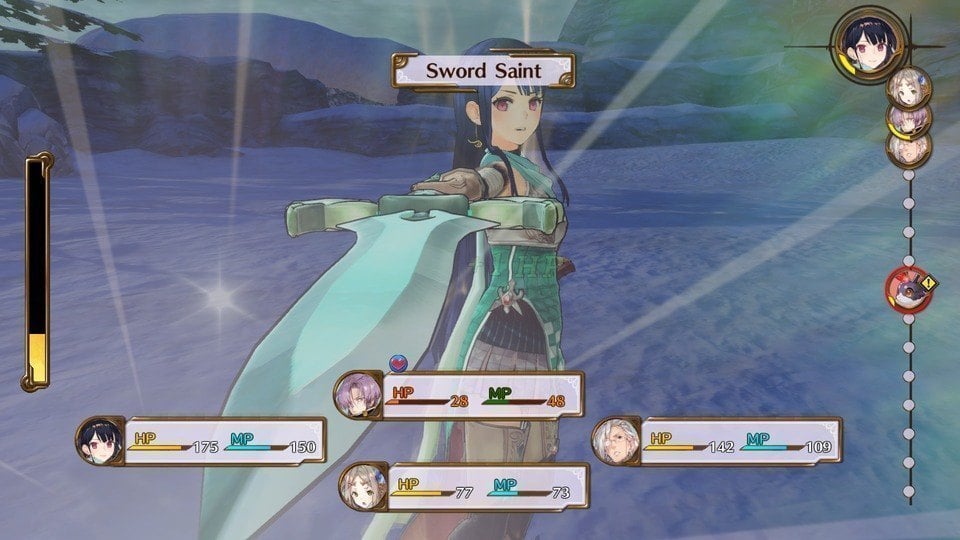 Along for the ride is her older sister, Liane, a hunter who has much experience with the outside world.  On their travels they meet a unique cast of characters who all end up contributing to the party in their own special ways.

The time limit system is back in this title, having been removed in both Atelier Shallie and Atelier Sophie.  You truly do have one in-game year to complete your journey to becoming an alchemist.  Like all prior games in the series idling does not pass time, but almost everything else does, such as fighting, gathering materials, and crafting.  After passing the exam, the game opens up completely and you have an unlimited amount of time to do whatever you want.  I feel that this is a good compromise between older and newer titles and I hope that the trend of splitting up timed sections with untimed sections continues on into future games in the series.

The battle system hasn’t changed from the previous title. It is still a generic turn based system where you have a party of up to six challenging monsters for quests and materials.  The chain-link system is still present and, when filled to the brim, allows characters to chain attacks and use special finishing moves.  Keep upgrading your equipment with gathered materials, play both offensively and defensively, and know when to run in order to succeed in the game. 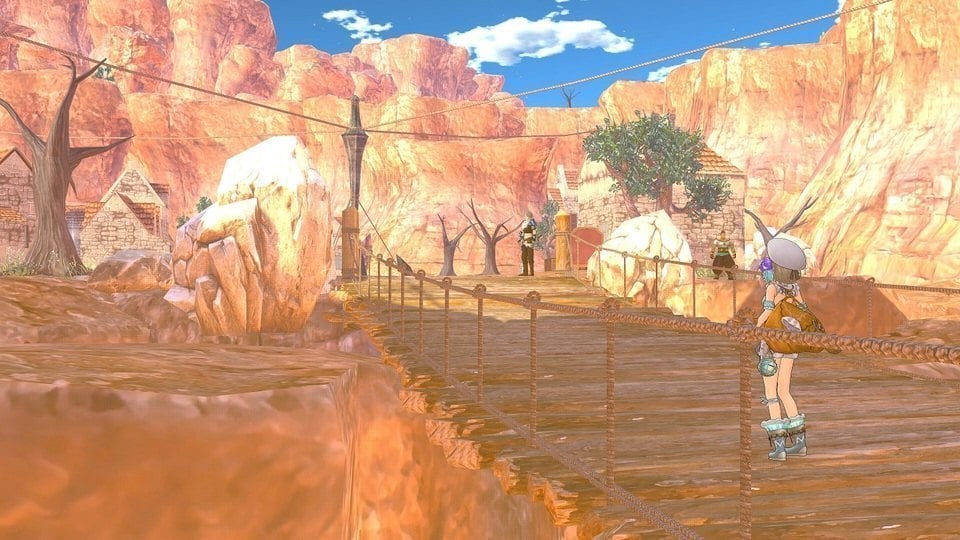 Luckily, it isn’t the battle system that has to shine in Atelier games.  The most important mechanic is once again the alchemy system.  Like in previous titles, a grid is shown where you place materials.  If you place them in a certain way you can collect bonuses and increase the quality of the item.  Unlike in the last title, each item has a tier system ranging from bronze to platinum.  In order to go up in the rankings you much craft an individual item many times.  As you increase in the rankings you can add more and more attributes to your synthesized items.

Like in the prior game, you have to reach certain objectives in the game’s world to unlock more recipes.  For example, you may have to talk to a certain person at a certain time or kill a certain amount of monsters before you are able to craft a particular item.  Unlike the last title however, you can unlock recipes early by cashing in Insight points, which you obtain by completing quests.

Like other RPGs, you can take on quests as simple as “gather X units of Y” and “kill X units of monster Y” to complex ones involving multiple parties and spanning the world.  All along the way Firis and her party continue getting stronger and better equipment, and Firis herself becomes more knowledgeable about alchemy. 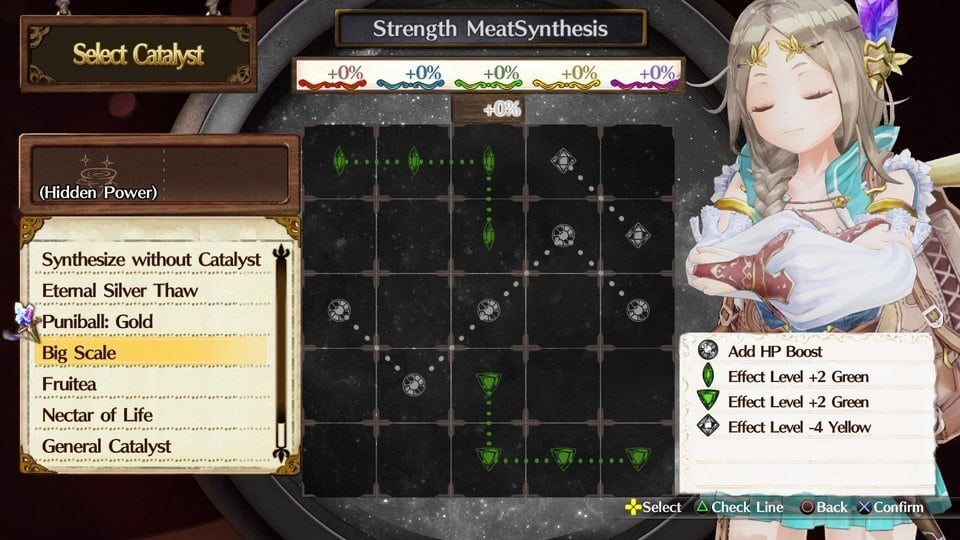 Once again, the game has multiple difficulty levels ranging from very easy to hard and you can change the difficulty on the spot.  When fighting monsters at a higher difficulty, they are more likely to drop better loot and more gold, but fighting on easier difficulties will allow you to defeat them much easier.  Knowing when to crank up the difficulty and when to dial it back is a strategy in and of itself that the player should use to their advantage to get the best materials.

While on the surface it appears that this game is targeted towards Japanese teen girls, when you look further into it... That’s actually probably true.  However the mechanics are set up in such a way that gamers of all ages and skills can get enjoyment out of the game.  Every once in a while we need to step out of our comfort zones and don’t judge a game by its cover.  I’m glad that I did, and I am sure that you will be glad to give it a chance as well.