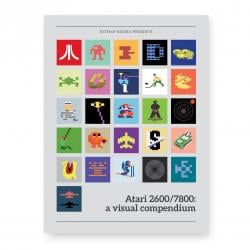 ‘Atari 2600/7800: A Visual Compendium’ is one of the latest additions to Bitmap Books’ “Visual Compendium” series. With over 500 pages of classic Atari games, history, trivia and interviews, is this book a must-have for the Atari nostalgic among us?

I was not yet born when Atari was synonymous with video gaming in the late 70s and didn’t own either of the Atari 2600 or Atari 7800 consoles. Yet, from an early age, I was familiar with the Atari brand, its iconic logo and the classic games it brought to home gaming. On a personal level, this attests to the lasting impact of the company on the gaming industry; even if (or maybe partly because) it is cited as one of the main causes of the video game crash of 1983. The Atari 2600/7800: A Visual Compendium is a book about all this and more. It’s a love letter to the iconic consoles, its games and the people behind those games; a love letter that’s over 500 pages to be exact.

After a foreword by game designer Garry Kitchen who shares how he reversed engineered the 2600 to write his own game, we begin our trip down memory lane with a 15-page History section. It recounts how the company was founded, designed its first console, got acquired by media giant Warner Communications for $28 billion and how, through some poor management choices, Atari crashed. Being not too familiar with the history of Atari, this section was particularly intriguing and eye-opening to me. But having read books like Game Over and Console Wars, I somehow expected a more fleshed-out history section than the 15 pages offer as there is definitely more to tell about the iconic company. But this is not the focus of the book as we get into the visual compendium part right after the History section. 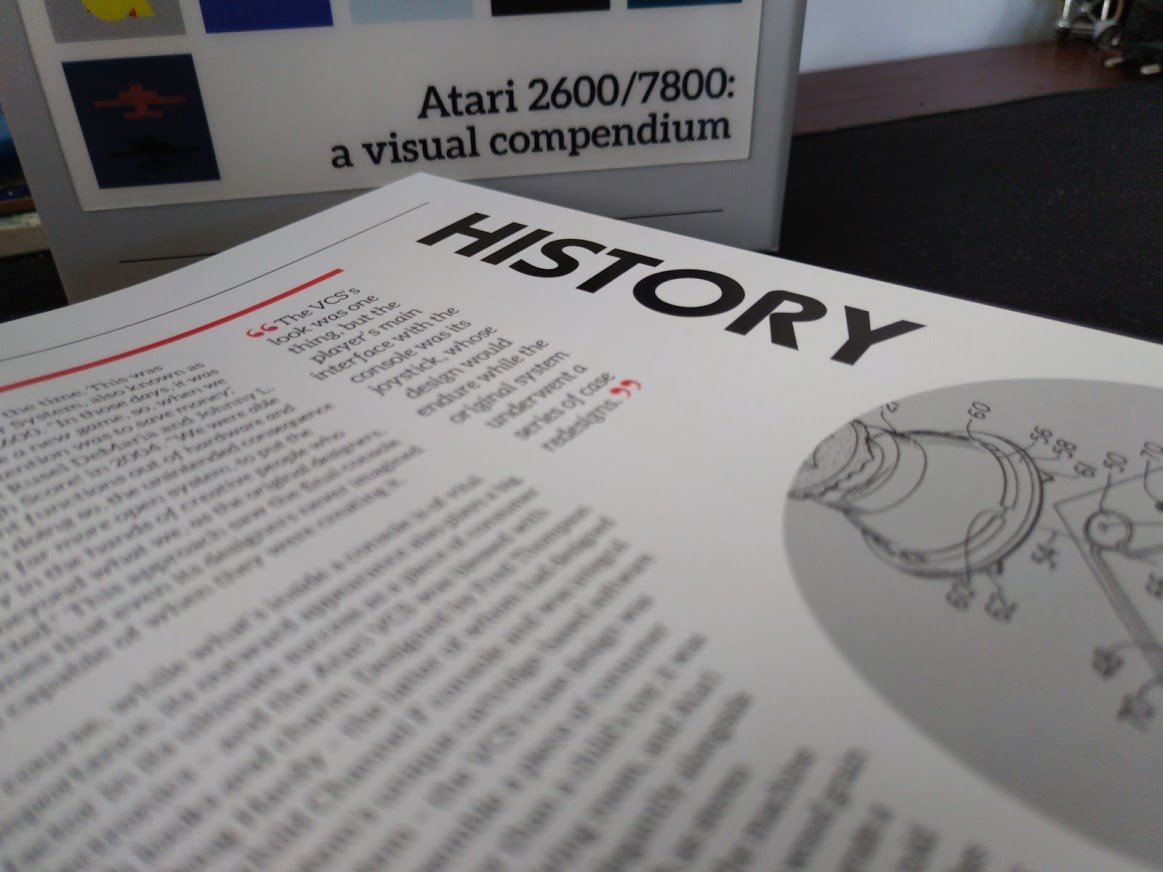 What follows are around 500, edge-to-edge high quality lithographic prints about more than 200 games for the Atari 2600 and Atari 7800 consoles. The vast majority are in-game screenshots onto which you can read when the game was released, some additional information and trivia about that game’s inspiration and some comments from games journalists and programmers. These will surely evoke nostalgic memories from those who played the games or recognise them. Even as someone who did not own a 2600 nor a 7800, coming across games like Space Invaders for the 2600 and learning about how it differed from the arcade version proved insightful and quite interesting.

For even more insightful reads, this Compendium features exclusive interviews with 10 industry figures. There’s one with Howard Scott Warshaw, the programmer of the 2600's E.T. the Extra-Terrestrial, frequently cited as the worst game ever. More than his thoughts on that game, his interview gives a peek at what developing a game for the 2600 back in the day was like. Then there’s an interview with Ed Fries, often called the “father of the first Xbox”, who talks about how he demade Halo for the 2600 and released it in 2010!

Indeed, Atari 2600 games are still being made, and Bitmap Books went the extra mile to include homebrew titles like Princess Rescue (a clone of Super Mario Bros.) and Mappy and some words from their respective programmers. 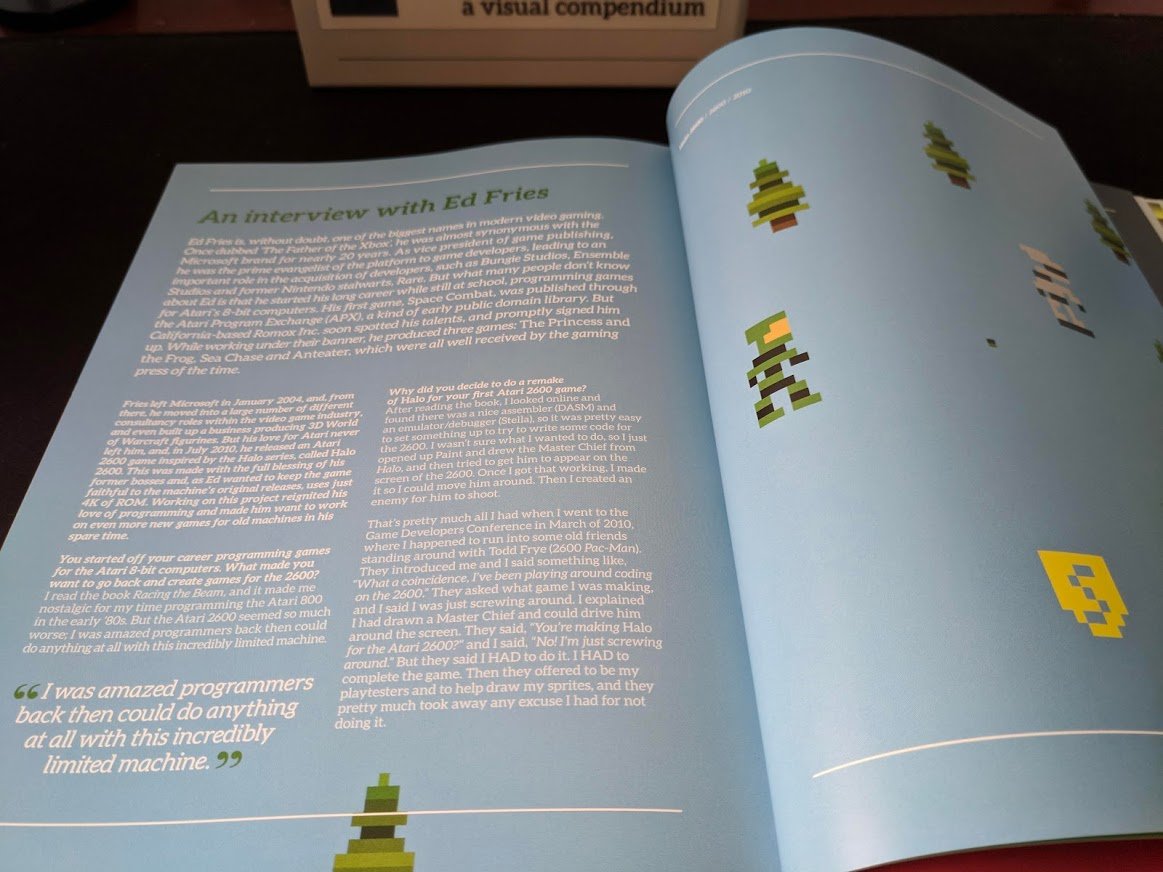 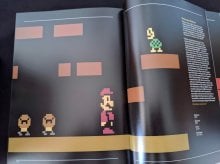 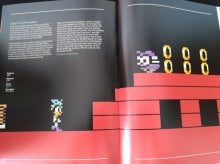 Similarly, Bitmap Books included some noteworthy prototypes for the consoles like Pit Fighter and Elevator action. But a significant chunk are only depicted as screenshots, with the only details given being the platform, genre and developer. It would be interesting to learn more about those like Lord of the rings and Planet of the Apes but you’ll have to content yourself with the screenshots.

Additionally, this Compendium features 5 developer profiles from the likes of Imagic and Activision, whose founders originate from Atari itself. These also make for some intriguing reads regarding how essentially third-party developers came to be. 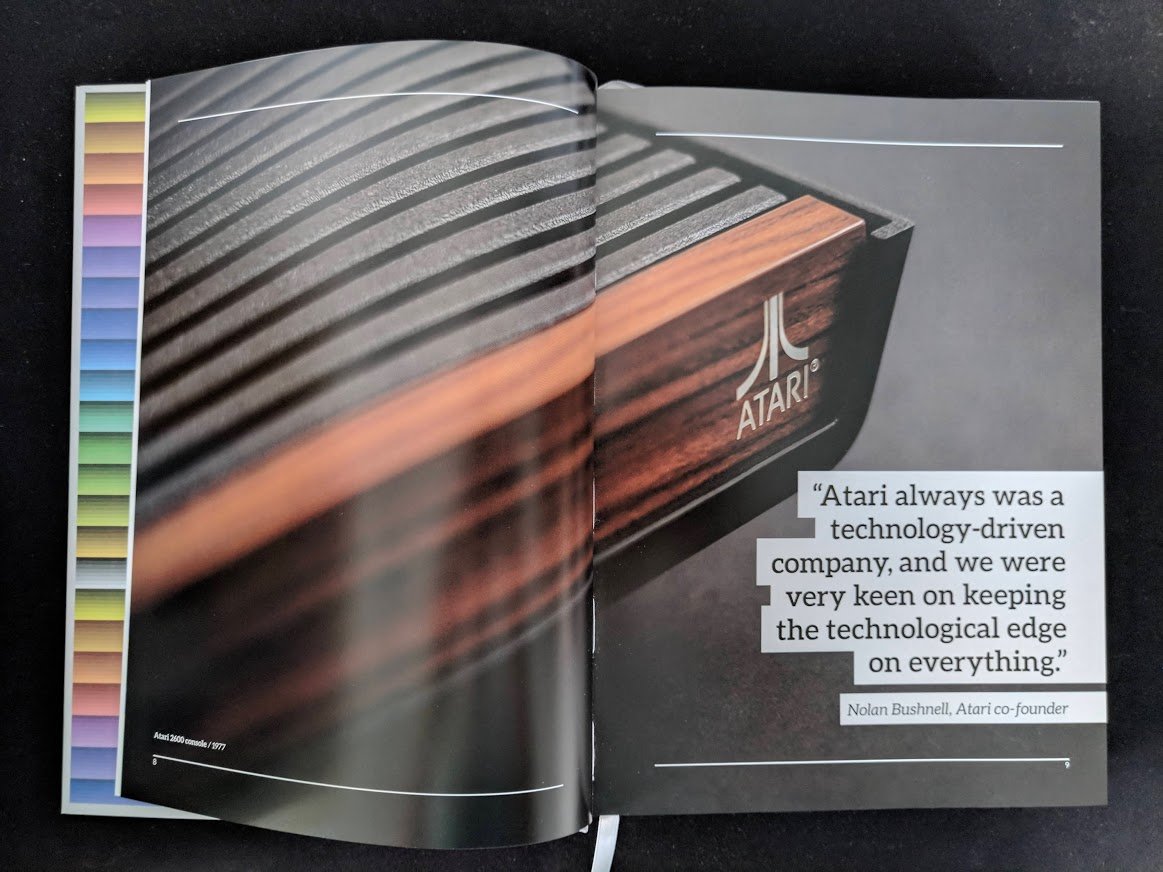 Even if I found the content of Atari 2600/7800: A Visual Compendium interesting and appealing as someone who did not own any of those consoles, I still think that some parts could have been fleshed out as mentioned before. The same goes for the visual part as it only features cover arts of only 20 games. Those could have been included for more, if not all, games, even as a thumbnail, as most entries cover double pages.

Another gripe I’ve had is how the contents are arranged. Atari 2600 games come first but aren’t listed in an alphabetical order and some Atari 2600 games even appear after Atari 7800 ones. So it seems like there are arranged by year of release. Then the other sections like Developer Profiles, Cover Art and Prototypes are fit in between. The best way to navigate through the book that I found is either to start from beginning to end or look for a particular title from the Contents on page 4. 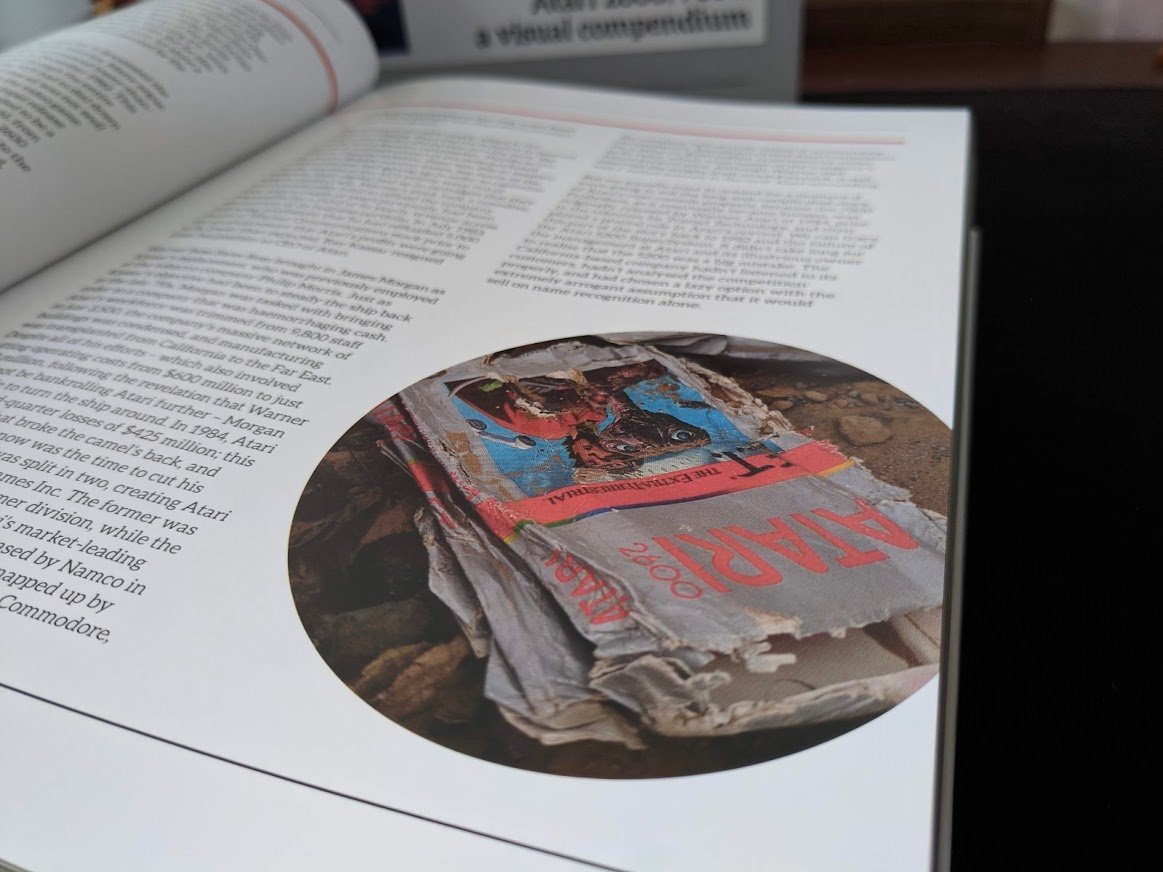 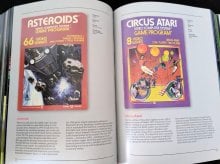 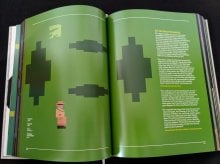 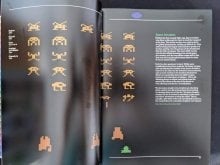 Nevertheless, this Compendium is a recommended one for collectors, those interested in video game history and, of course, Atari fans. It is available in hardback (which is the one featured in this review), softcover and Collector’s Edition, each priced at £32.99, £27.49 and £54.99 respectively. Each version also comes with a PDF copy of the book which is a really nice add-on.

The total number of pages in the book is 528 and the hardback version’s dimensions are 170mm × 230mm. It comes in a 3mm protective board slipcase with an “animated” lenticular image (the type of picture that changes when you slightly turn it and see it from the side) which I found to give it a rather premium feel which is accentuated by the varnished cover and sewn binding. There’s also a dust jacket to keep the book nice and tidy. Oh and it’s also an officially licensed Atari product.

Considering what it offers, the price point is rather fair and will surely satisfy any customer. 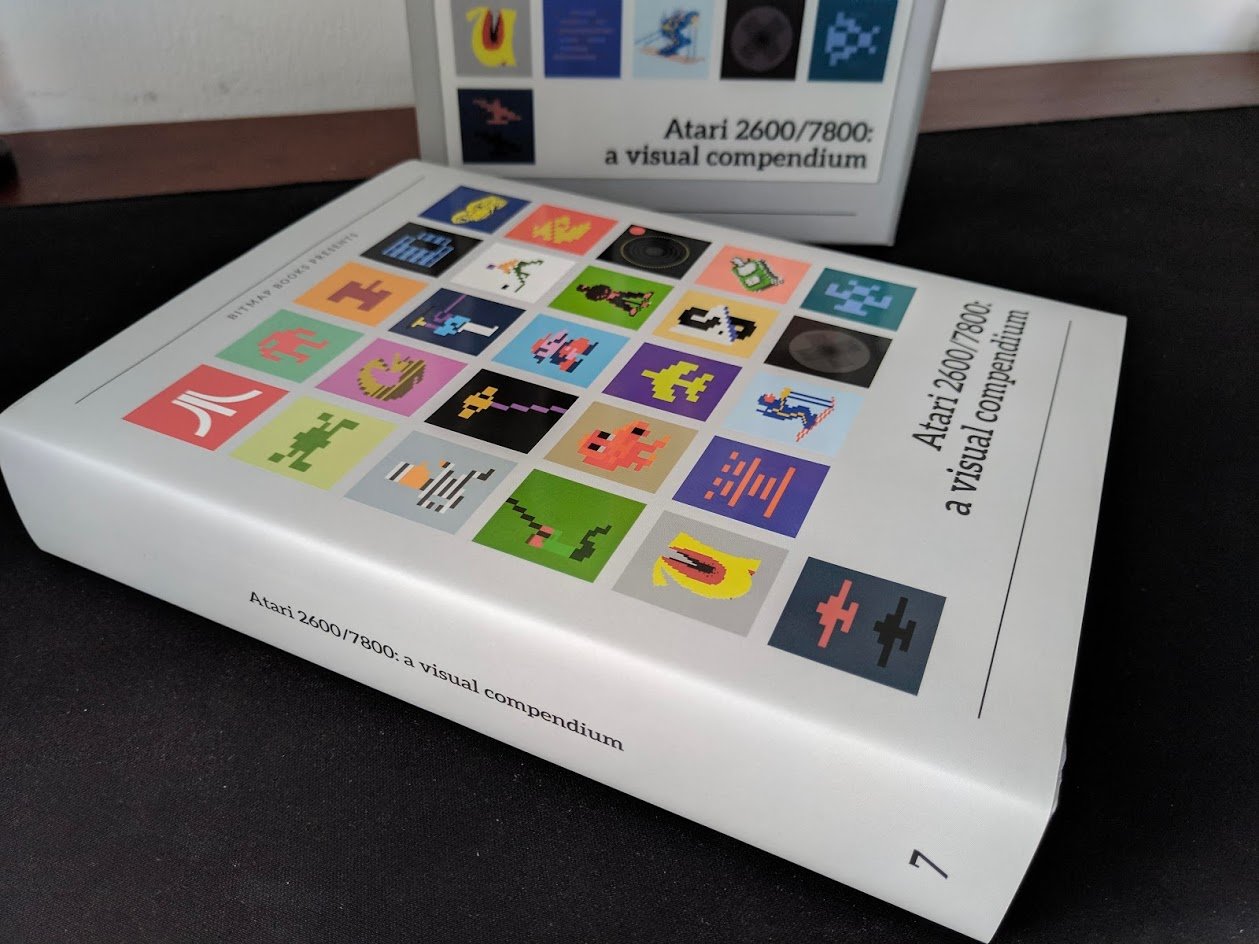 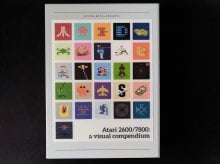 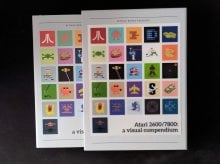 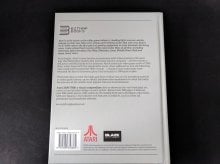 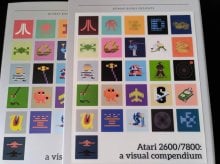