While Xbox users have the Elite Controller, PlayStation fans need their own equivalent. Does Astro have what it takes to compare with the best of the best in the gaming controller world?

If you've ever head of Astro Gaming in the past, it's likely due to their expansive range of gaming headsets. The company is looking to explore new horizons, though, stepping into the world of gaming controllers with the Astro C40 Tournament Ready Gaming Controller. As of late, "premium" gamepads have been incredibly popular, kicking off a trend with the launch of Xbox's Elite Controller, and being followed by other attempts, such as the Scuf Vantage, Razer Wolverine, Elite Series 2, and the focus of our review today, Astro's C40 TR.

Ever since the release of the Xbox Elite Controller, I've fallen in love with the idea of a more expensive gaming controller. Considering the fact that a controller is the way you interact with every single game, having a gamepad that feels higher quality, more durable, more unique, it just makes your everyday playing experiences that much better. Some may also find that these types of controllers are not only good for the sake of comfort and build materials, but also for the added function that they provide, with remappable inputs, and extra buttons on the sides or back. The moment that Astro had announced the C40 TR, I'd been interested in it, wondering if they could create a premium controller for core PlayStation gamers.

We'll start right out of the gate with the price of the Astro C40: $199.99. That's more than the wallet-crushing Xbox Elite Series 2, or alternatively, the cost of buying five DualShock 4 controllers all at once on Amazon. This is no price to sneeze at, but it's also not your average third party controller, either. The packaging reflects its price tag; it's sturdy, matte, and nicely textured, just like the gamepad itself. Removing the outer two layers of the box reveals a hard shell case, which houses the C40, four analog sticks, an allen key, a micro USB controller, and a dongle. 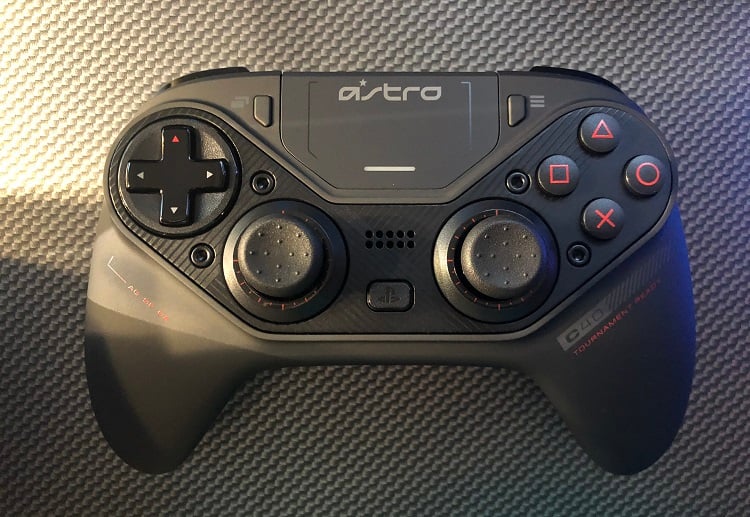 The Astro C40 TR, both in look and feel, is the peak form of the DualShock 4. Coming in a sleek black-and-red color pattern, the controller is stylish in every way, making for a striking appearance, whether you're holding it during an active gaming session, or it's sitting on your desk acting as a cool centerpiece. While the average DualShock 4 is lightweight, almost cheaply so, at 210 grams, Astro's attempt feels much more premium. Considering the price, it absolutely should; the 310 grams of the C40 is weighty enough to feel durable and solid, without being noticeably heavy when held for long periods of time.

As this is a gamepad meant for use on the PlayStation 4, the layout features the symmetrical analog sticks and Triangle/Circle/X/Square face button design that we've all come to know and love. It even has a touchpad, which is useful for the handful of games that make use of, or require it. However, the big trick to the C40 is that it allows you to swap the placement of its joysticks and the d-pad. If you can't get along with a controller that doesn't have a more asymmetrical layout, such as the Xbox 360's, you can simply use that included allen key, and remove the faceplate covering the center of the gamepad, to change the placements to suit your liking. There's even two different types of analog stick, a more "grippy" concave style, and a longer one, which was smooth. This was especially useful in cases where I was playing a PS4 game, and desired the traditional layout, but then wanted to then switch over to another game on my PC, where I preferred the analogs to be further away and to have more traction.

When it comes to controllers, look and build quality are important, and any additional features are nice, but the key factor always comes down to the overall feel of each of the buttons and sticks. In the case of the C40, it succeeds on all fronts. The face buttons are delightfully clicky, with a nice amount of travel, springing back up the moment you release them. They're much more responsive than the DualShock's, and the flatter, slightly textured buttons aren't as slippery as the kind you get on the Xbox One Elite Controller. These are exactly the kind of buttons I want to mash, whether it's a beat 'em up, a sidescroller, or a shooter--they're perfect.

The d-pad is also pretty high up there--not quite comparable to my personal standards set by the original Nintendo DS, or the PlayStation Vita--but it gives a good amount of feedback when you rock it back and forth. It's plenty good for any 2D retro platformer or fighting game. Surprisingly enough, the start/select, or rather, the share and options buttons, are nice to press as well, though you might have to reach your thumbs a little further than normal to get at them. Some of the smaller satisfying details about this controller are a bit more subtle; the control sticks are metal, and when you quickly move them back and forth, you get this very loud "clack"--the kind of sound you might remember from the GameCube gamepad. While it's noticeably loud, it's not outright obnoxiously loud, so you get all the audible clicks and clacks, without waking up everyone in a 100ft radius. 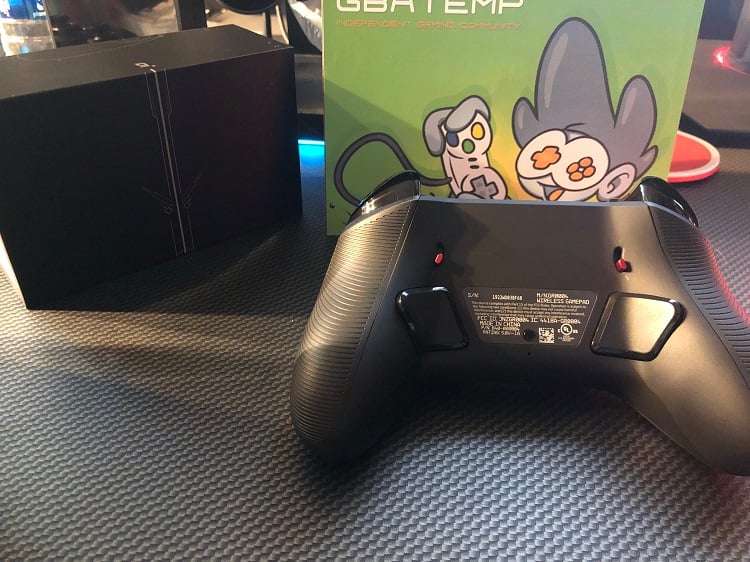 Another facet of the C40 that sets itself apart from the competition is the back, which has two extra buttons. Most other controllers use paddles, which I find uncomfortable and awkward, especially as they get in the way of how I normally hold a controller. These extra inputs can be useful in many situations, but I'd much rather have the extra comfort and two hotkeys, rather than maneuvering my hands around four. The two buttons are placed right where my middle fingers wrap around the back of the controller, giving quick access to certain actions, such as reloading or looting items, without having to take your hand off the right analog stick and reach over to the face buttons. I can't say that I had enough skill to where shaving off those extra few milliseconds saved my life in a match, but the button placement felt natural, and made things just a touch easier.

After all that, we're left with the triggers, which also boast a fun little addition. A small switch on the back can turn the right and left triggers from normal, to a "hair trigger", meaning it has half the normal travel distance, making it easier to rapid-fire in games. In the case of Borderlands 3 and The Division 2, I could get off way more shots than I would normally, and even in games where I used melee attacks, not having to fully press the triggers made it easier to combo enemies.

While you can use the C40 without any software whatsoever, Astro still offers a program that gives you a little more control over your controller. Within it, you can edit and tweak numerous features, such as the volume of your headset and mic, when plugged into the 3.5mm jack at the base of the controller, being able to further customize the sensitivity of the triggers, remap the two back buttons to any input you want, and even setting your own dead-zones for the analogs. The software works nicely, and I never ran into any issue with it, especially due to the fact that when I was done making any changes, I could save two profiles to the controller itself, meaning the program wasn't forced to be running in the background.

Connecting the C40 is relatively easy, regardless if you're trying to set it up with your PS4, or a PC. The controller comes bundled with a micro-USB cable, and even if you've already got dozens laying around, I'd recommend keeping this one safe, as the C40 has a very specific input. This is done to keep the micro-USB connector safe, as they're known to be especially fragile on DualShock 4s, with the constant pulling and stress on the input, after hundreds of charges. It's not impossible to find another cable with a thin enough base, but the included one works perfectly, so you might as well make the most of it, if you're going to use the controller wired. If you prefer the wireless approach, Astro also includes a wireless dongle--which results in less input lag than Bluetooth--which plugs in via USB to either console or computer. This sadly means you won't be able to turn your PlayStation 4 on with the controller, as with all third party PS4 gamepads, but it's not really an issue with the controller itself, just a grievance with the specifics of Sony's hardware. 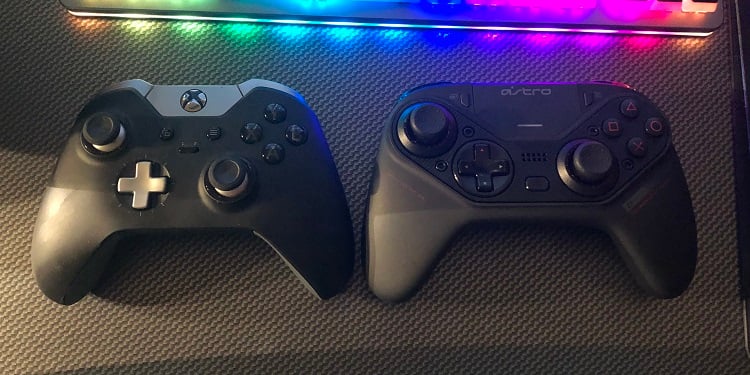 Given the extreme cost of the Astro C40, justifying such a purchase might be a bit difficult. However, if you're within the PlayStation ecosystem, enjoy customizing your controller's button placements, or just want a controller that's built to last, the C40 will undoubtedly serve you well. Though I love the Xbox Elite Controller, Astro has done a fine job in creating a genuine competitor in the fancy gamepad arena. For me, the C40 offers better face buttons, some extra comfort, and more reliable shoulder buttons, which is enough for me to continue using it, whether I'm playing on PC or PS4. If you're interested in getting one for yourself, I highly recommend trying it out, because once you hold it in your hands, you might not want to let go. 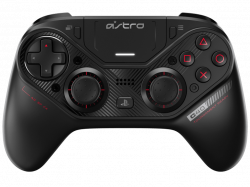