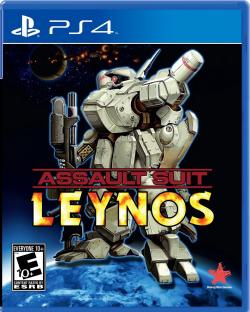 The cyborgs are coming!

Assault Suit Leynos, otherwise known as Target Earth in North America, was first released for the Sega Genesis in 1990.  It's been nearly 26 years since its debut and now it has finally been remastered for the PS4.  This newest version of the game sports HD visuals, full Japanese voice acting, an improved menu, and a new soundtrack.  Just like in the original, the point of the game is to defend future Earth from cybernetic enemies from the farthest reaches of space.  To do this, you don a suit of armor and shoot everything that comes your way.  Most of the plot stems from information spoon-fed to you between each chapter, but it also develops in the game with characters telling you what is going on, much like in Star Fox. 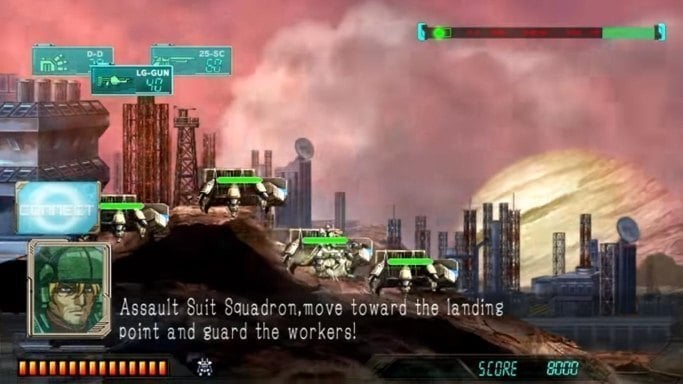 "I'm moving the right stick and nothing is happening!  MOM!!!"

Click here to see what a Sega Genesis controller looks like.  That is what people in the 90s had to deal with to play this game.  One would think that with the vastly superior PS4 controller (pipe down nostalgists), that the developers would update the controls.  Well they did... a little.  You can move your character with both the control pad or the left control stick.  You can remap buttons to do what you want and the game utilizes every one of them.  Every one except for the poor right control stick.  You see, instead of using the left stick to move and the right stick to aim like in modern shooters, both are done solely with the left stick.  This isn't that big of a deal for fans of the original game, but I do wish that there was an option to aim with the right stick as well (at least in arcade mode).

Not being used to the controls – the first thing that I did was head to Option>Practice>Tutorials 1-3.  These tutorials show the basics of how to play the game, including combat and maneuvering.  They were the key to allowing me to succeed in the game.  Happily, the game provides an incentive for completing the tutorials.  The scores that you earn in each tutorial are added to your overall score and as a result will help rank you up.  By the time I finished all three tutorials my rank increased from level 01 to 09.  As you rank up you unlock bonus weapons and content to use in practice mode.  Even if you lose a level, your score is added to the total.  It gives a real incentive to keep playing and trying to get better. 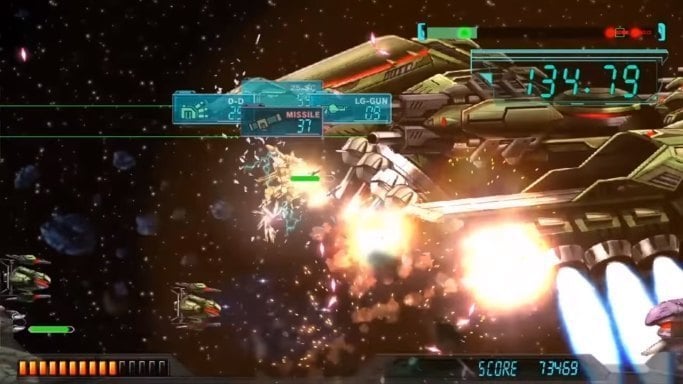 The game has two modes, Classic and Arcade.  Arcade is the default mode in the game where you can pick between three difficulties, have access to checkpoint saves, listen to the new audio, and experience the slightly extended levels.  Classic mode is exactly how it sounds, the classic way to play.  Here the game is as close to the original as possible, while keeping the updated graphics. Classic mode sports the same audio as the original game and keeps to its brutal difficulty.  No checkpoints, no difficulty level (except for what I call "kick your ass" difficulty), and no remorse.  While easy mode can be beaten and enjoyed by casual players - Classic mode is for the true champions.  Although the game itself is only 8 stages long - each stage does something different and none of them feel remotely the same.  The mission is never about getting from point A to point B, but can be anything from preventing an enemy mothership from reaching your base on land, to defending your own vessel while zooming through space in zero gravity.  The variety in level design is nice and honestly may have been a bit ahead of its time.

The arsenal of weapons available to you is awesome as well.  As you progress you will find that no two weapons are the same and that they are all designed to be useful in different situations.  As I progressed through the game, I found myself trying out every weapon - and even after completing it I am still trying to figure out when the best time is to use each one is. 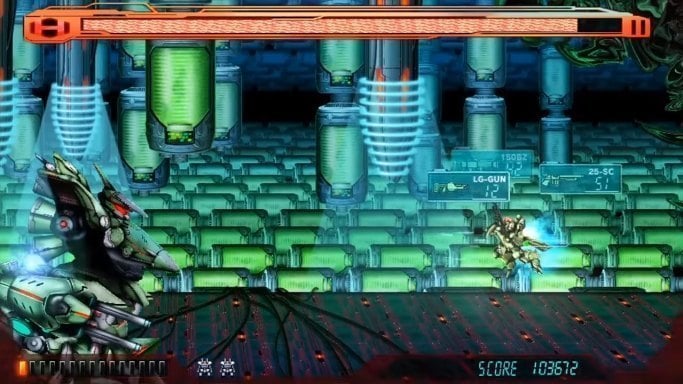 When all's said and done, with only 8 short levels, the game can be completed within 1-2 hours by skilled enough players.  However, it is not an easy game to platinum as you may have to beat the game many times in order to obtain all of the trophies.  Practice makes perfect in this game, and the short campaign may be an incentive for many players to keep playing to improve their skills.  After all, once you become a pro at this game, I don't see many of today's games giving you much trouble.

I realize that this is a short review, but there is not much more to be said about the game.  Assault Suit Leynos was first created at a time when many games had to be brutally difficult in order to entice players to keep playing.  It was remade today with fans of that period in mind and will not entice many others.  At its $19.99 price tag, it may be worth the cost for fans of the original game and also for players who just need a challenge in today's gaming environment where difficulty is rapidly being pushed to the wayside.