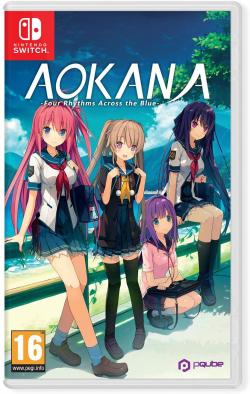 Imagine a world free from the constraints of gravity. In Aokana, you need imagine no more, thanks to the wonderful invention of Grav-Shoes!

Originally releasing for PC in Japan just under six years ago, Aokana: Four Rhythms Across the Blue is an adult visual novel depicting the story of Masaya Hinata and his cohort of ladyfriends as they learn, love, and long for the sky. When you put it like that, I really could be talking about any visual novel, but Aokana is one I found myself enjoying to an unexpected degree, and there’s a good bit as to why that might be. 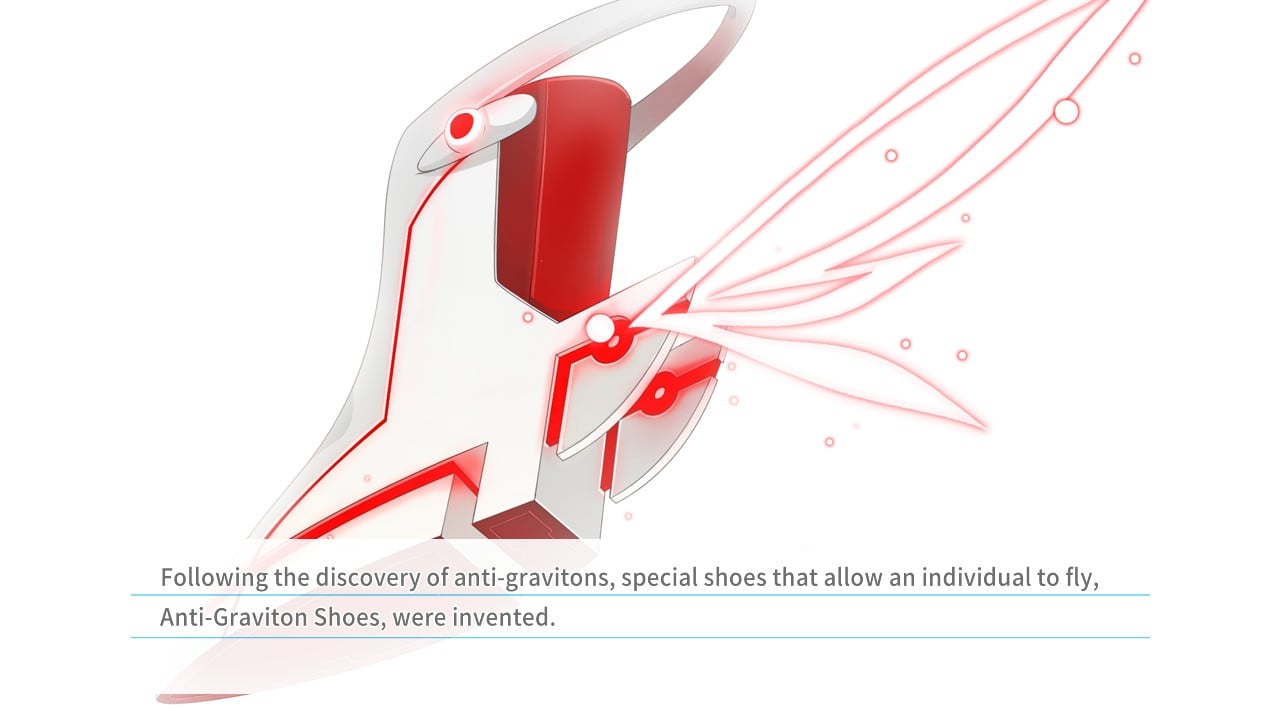 As many of these games often are, Aokana is set in an alternate Japan. Really, there’s only one thing of note that’s different, this being the discovery of particles with spectacular anti-gravity properties, and the subsequent development of anti-gravity shoes. With cool new technology comes cool new sports, and at the centre of this game, we have Flying Circus, commonly abbreviated to FC. FC is simple: you have two players high in the sky. They score points by flying to each of the four buoys positioned in a square, or by touching the other player’s back. It’s easy to grasp, and that’s a good part of what makes it so great for a story like this. You get the fundamentals from the outset, so when they start adding tricks and explaining techniques, the sense of depth to the game grows without the game itself seeming convoluted. These tricks and techniques range from flying higher so you can descend at speed, to more out there ideas like an “air kick turn”. It’s fun to follow, and it’s fun to see how characters react as matches play out as part of the story, them often as surprised as you to see how things unfold. 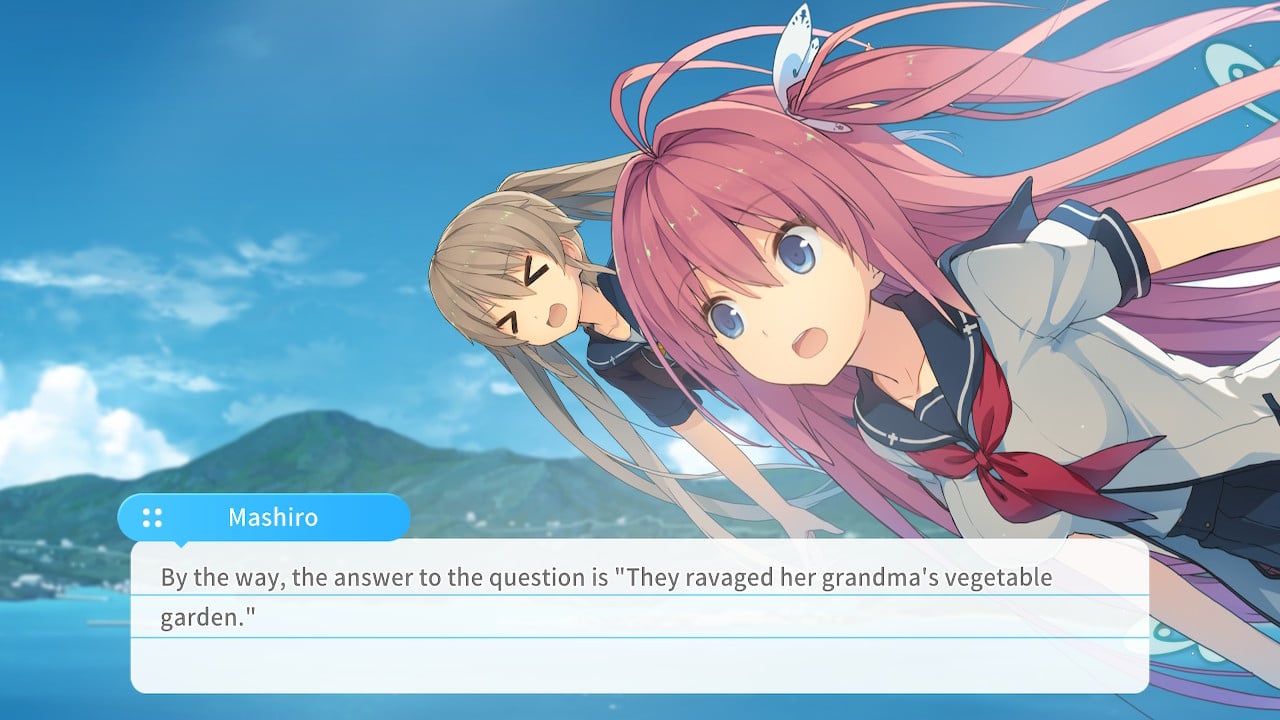 Aokana features a great number of faces and unique characters, each presented with a set of genuinely stunning art. The visuals and presentation as a whole are something to appreciate. For a game conveying a sport so centralised on 3D movement, it manages to wonderfully convey motion and excitement. I can’t deny a part of me is sad that the sport of Flying Circus couldn’t have been playable, but given the limitations of a visual novel, I have to give credit where due. Moving the characters across the screen, shaking the camera—small things that add up to a grander picture. It leaves you wanting more in the best way.

As mentioned before, the plot follows Masaya Hinata, but calling the heroines his “cohort of ladyfriends” is underselling them more than a little. The long and short of the story is that Hinata ends up teaching a new arrival at his school, Asuka Kurashina, how to fly with Grav-Shoes, and after a short series of events, she falls in love with flying as a whole and FC. Along with Hinata’s friend Misaki Tobisawa, and her tagalong Mashiro Arisaka, she joins the FC club with hopes to fly beyond anything she had imagined. The conflict here lies in Hinata’s past. As a rising star of FC in his childhood, his dreams were swiftly shattered by a bitter loss, pulling him from the sport he once loved. This debate of whether to return to the sport serves as a roadblock from the start of the story, and soon has you invested in his development as bit by bit, he finds passion. Is it for FC, or for the girl who dragged him back to it?

Hinata’s character is one I really like, which is somewhat rare for me in a male-protagonist visual novel. Too often you find the game bogged down in lechery and fanservice, because let’s face it, too often it’s what the target audience want. It’s not to say there’s no offhand remarks or panty shots thrown in, because of course there are, but the source of these generally stem from one character, and rarely take over a scene. Hinata isn’t a blank canvas to project yourself onto, nor is he just a tool to keep things moving forwards or keep the audience engaged with a flash. He’s a meaningful character, and one I enjoyed thoroughly.

The members of the FC team each come with their own quirks that collide and combine well. There’s inappropriate humour mixed with naive belief, blind adoration mixed with provocation and teasing, and then of course your innocent spirit clashing with unexpected circumstance. Characters start with traits that make them stand out and allow you to define them as individuals, but as the plot goes on, you find these warping and developing in just as satisfying a way as our male lead. You see the cast grow together meaningfully, captivating you and drawing you into both their victories and defeats. 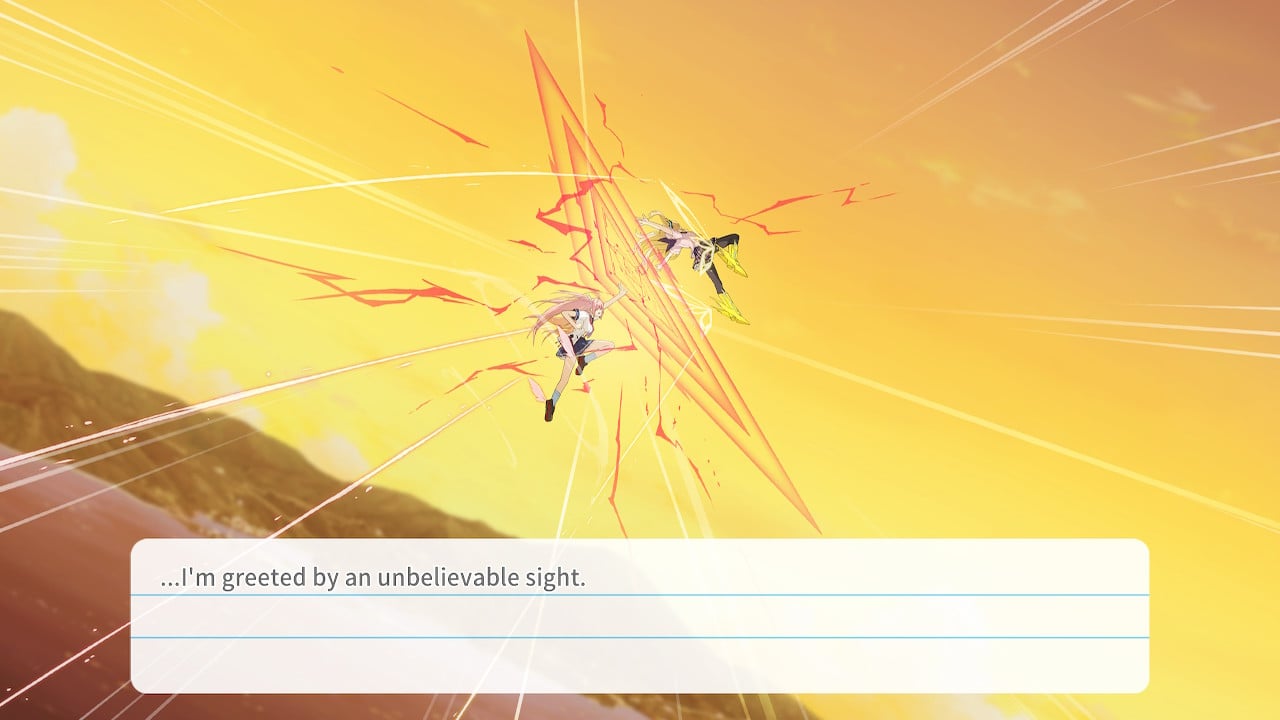 One particular point of interest with the plot is its multiple endings. Though a staple of visual novels, Aokana does mix things up a little in how it presents them. In every branching visual novel I can think of, you have a fairly standard formula. You have a paralogue, maybe an introductory chapter, then you get siphoned off into a character-specific storyline. This system works. It focuses the plot and development on one character in particular, and oftentimes it’s one you’ve gone out of your way to choose, so you’re actually interested in seeing them grow. Aokana does things differently. Instead of having entirely branching storylines, the bulk of the game is what I’d describe as a neutral path. It’s only in the latter third of the game your decisions throughout the story really come into play and you get placed on a route towards a certain ending. It’s interesting. On one hand, it means there’s less content to consume with the variance only really being present at the end, but on the other, it solidifies the idea that each character is important. Each have room to grow and develop, and favouring one doesn’t deprive you of another. Compare this to a game like Collar X Malice. Yes, there’s more content, and the split paths allow the game to tell only parts of the larger story in each route, but from a character development standpoint, it’s jarring to go from being romantically involved with a character to them staring at you stone-faced again. Both approaches have their merits, but I’m glad Aokana went this way.

Now, there is one point I brought up in passing at the start of the review, and one a certain group may be interested in discussing: this is an adult visual novel. Or at least it was. Unsurprising to nobody, the Switch version of the game has the 18+ content cut, but I’ll counter that by saying that I don’t think it detracts from the quality of the game as a whole. This isn’t a game that feels lacking in the absence of these scenes, and if it means a wider audience can enjoy it, I’m all for it in its current state. If it does happen to be a dealbreaker for you, you can still grab the game on Steam and download the 18+ patch. 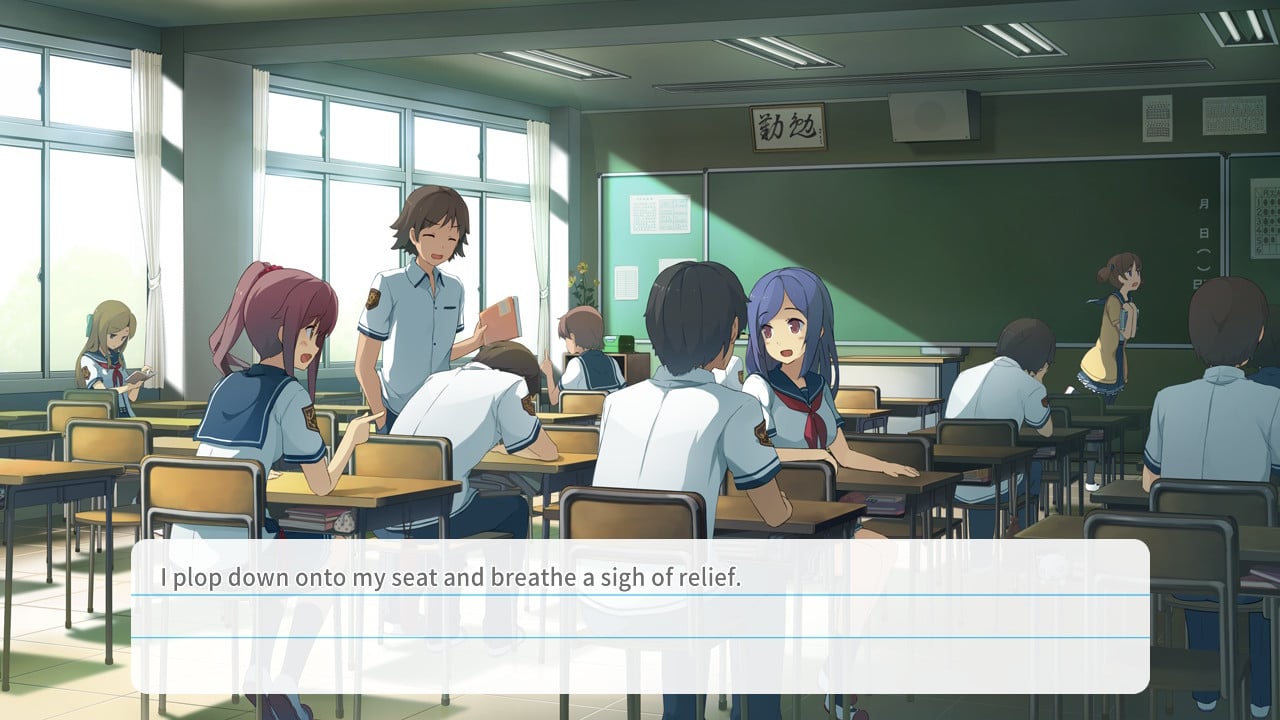 The port itself is as you’d expect as a whole. The UI feels great to navigate, there’s a decent number of options to play with, and there’s even limited touch support. On the surface, it really is ideal, and it likely would be were it not for a very minor but very irritating flaw. For reasons unknown to me, the Switch port seems to have a phantom input issue. When you press A to advance the text, occasionally it will advance through multiple text boxes. It’s frustrating, even if there’s a button dedicated to going back to the previous text box, alongside the usual dialogue history. While it didn’t ruin the experience for me, it stands as something holding the game back from its full potential, and something I hope can be fixed.

Once again, PQube are doing God’s work in bringing great visual novel adventures to the mass market the Switch so naturally offers. Aokana is ultimately an incredibly charming and enjoyable title I find myself able to recommend to any fan of visual novels, or those who just want a relatively grounded (if you’ll pardon the pun) tale full of likeable characters and satisfying development. It is a joy.