Your gaming chair needs a friend, and what better partner than a certified gamer desk?

Y'know, I thought I was out of the gaming furniture review business after I'd reviewed the hilarious-yet-comfortable Cougar Gaming Sofa, and yet here I am, once more. Today's review sees us tackle the AndaSeat Masks Computer Table, aka, a gaming desk. Promising to be Tough as Nail, this desk shares some similarities to the previously reviewed AndaSeat Eagle, though I'd say the Masks is the smaller, edgier brother, comparatively. It's easy to slap together some wood and metal legs to form a table, so how did AndaSeat do in their latest endeavor?

Where the Eagle has traditional upside-down "T"-shaped legs, the Masks here has hollow metal "Z"-shaped ones, which fit the bill for a gamer theme, although you could also call it "garish", if you're so inclined. The legs do a good job of staying out of the way of my chair's wheels, positioned just back enough that I never accidentally ran into them. Regardless of what you think about their appearances, they're also really sturdy; once assembled, the desk was very secure, to the point that it didn't so much as wobble when shoved around or pushed (more on the desk being pushed around later, though). There's no flex to the tabletop itself, either. The whole thing is quite solid, which surprised me, because I didn't expect that to be the case while building it. 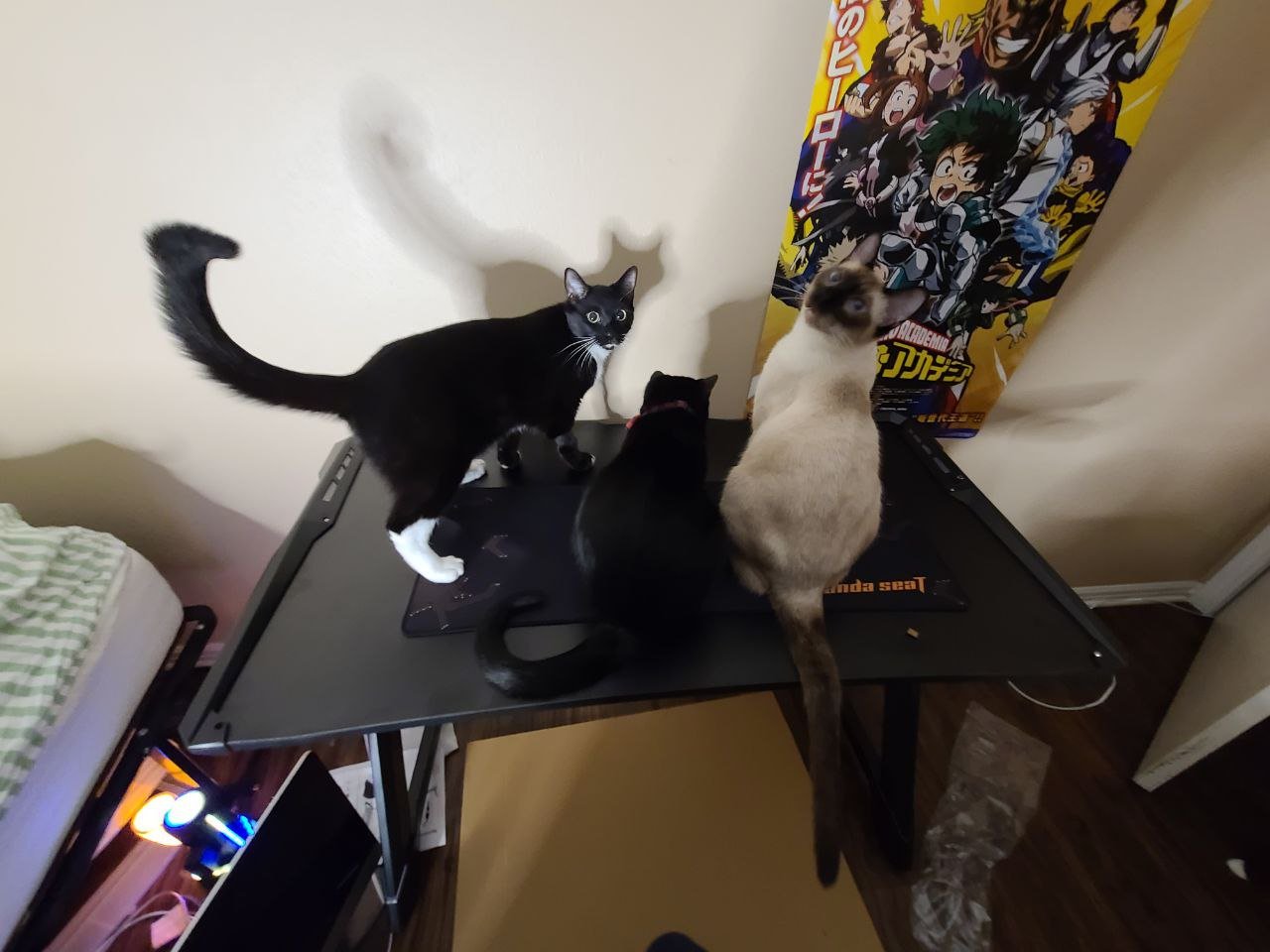 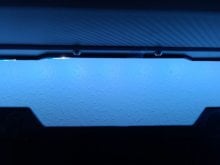 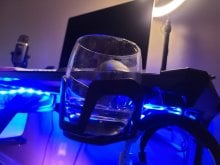 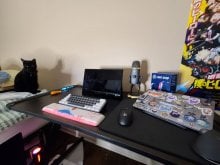 AndaSeat packaged the desk well, in a giant 55-pound box that had plenty of padding and cardboard to keep all the materials safe in transit. Even the corners were protected with foam padding--a nice touch that I appreciated, as the last desk I reviewed lacked that, and suffered a bit of travel-related damage for it. As for the process of assembling it, I wasn't as impressed, and while it was a simple task to complete, there were a few annoying points throughout the ordeal, such as the cheapness of the screws, which I managed to strip when using a screwdriver, by hand. Considering the fact that I'm not even remotely strong, the fact that I could strip the screwdrivers so easily was concerning. They were also a little fiddly to get into the desk, even with the pre-drilled holes, and I heard some unsettling creaking and cracking noises from the tabletop as the screws were turned in.

Appearance-wise, this desk certainly looks the part; it's peak gamer aesthetic, complete with RGBs on the edges. You can choose between static colors, a rapid cycle, or a slow fade, with the LEDs shining fairly brightly. You could get a better result from applying some RGB strips to the underside and edges (which I did), but the RGB fanatic in me is amused by the inclusion nonetheless. The table itself has that popular carbon fiber look to it, which is nice, sharp, and modern. I'm a fan of the style, but the material loves to pick up any smudges or errant fingerprints, which serves to make the desk look messy and aged, even when it's brand new and barely-used. You'd either need to be careful with where you place your hands on the desk, or just cover it with the long mousepad that AndaSeat provides. Otherwise, it looks great.

With a weight capacity of 330lbs, the Masks can take a lot of abuse, despite having hollow metal legs and an overall light-feeling build. I don't come close to the weight limit, but I (107lbs) sat on the desk, with my cat and computer on it, just for fun to see how the desk fared, and it did quite well; there was no flexing from the tabletop and the legs stayed sturdy without swaying. I then pushed all the weight to the front, to see if it similarly would lack support on that edge, and unsurprisingly, it did, albeit not to what sounds as dramatic a degree as it is with the Eagle desk. Since there's no support directly under the front edge, as the "Z" legs are in the back, it makes sense that the Masks wouldn't do well with being weighed down there, but I can't really imagine a scenario where you'd want your PC or monitor precariously balanced on the front edge, anyway, so it's a bit of a non-issue in this case. 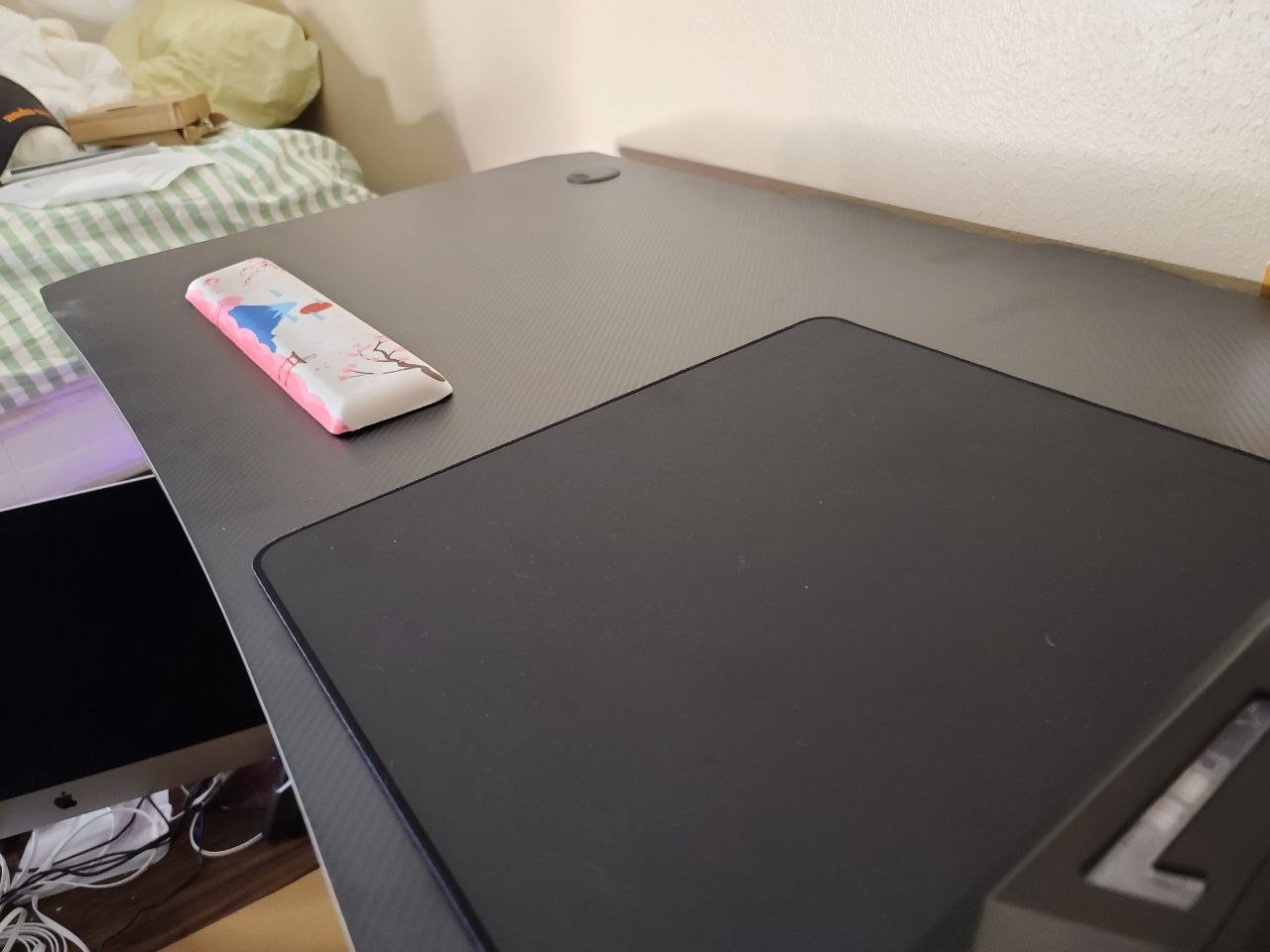 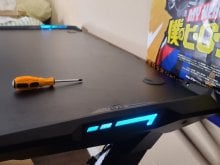 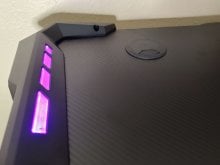 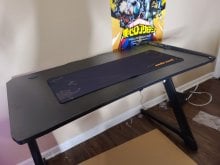 One thing that I've found to be an annoying issue is that the desk is a little too light. Because the legs are hollow and the tabletop's material is pretty lightweight, too, the whole desk is easy to accidentally push around. This is especially noticeable every time I get up, as I tend to push my chair back from the desk, and then stand up. However, when I try to do that, I inevitably slide the Masks closer and closer to the wall every time that I get up. Should you have carpeting instead of hardwood floors, or you keep the desk in a corner, you might not be as irked by this kind of problem, but for me, it was a pretty major sticking point.

Coming in at 47 inches long, the Masks is smaller than the average gaming desk--something that I actually appreciate. A lot of these desks tend to be wide and obnoxiously large--since the Masks is on the shorter side, I was able to fit it into my bedroom without issue, meaning it's a good pick if you don't have much space. You still get a good amount of room to put everything, too. I was able to fit a laptop, a 27" iMac, a lamp, some assorted accessories, a microphone, and a large mousepad, all without feeling cramped for space.

There's some cute inclusions that set the Masks apart--notably two headphone hooks and a cupholder. While the headphone hooks are shallow and too close to the edge to be useful if you use your desk next to literally anything on the sides, the cupholder is endlessly amusing, and actually useful. I liked being able to keep a drink nearby, but not on the desk itself, and the cupholder even supported my giant Iron Flask water bottle, to my delight. 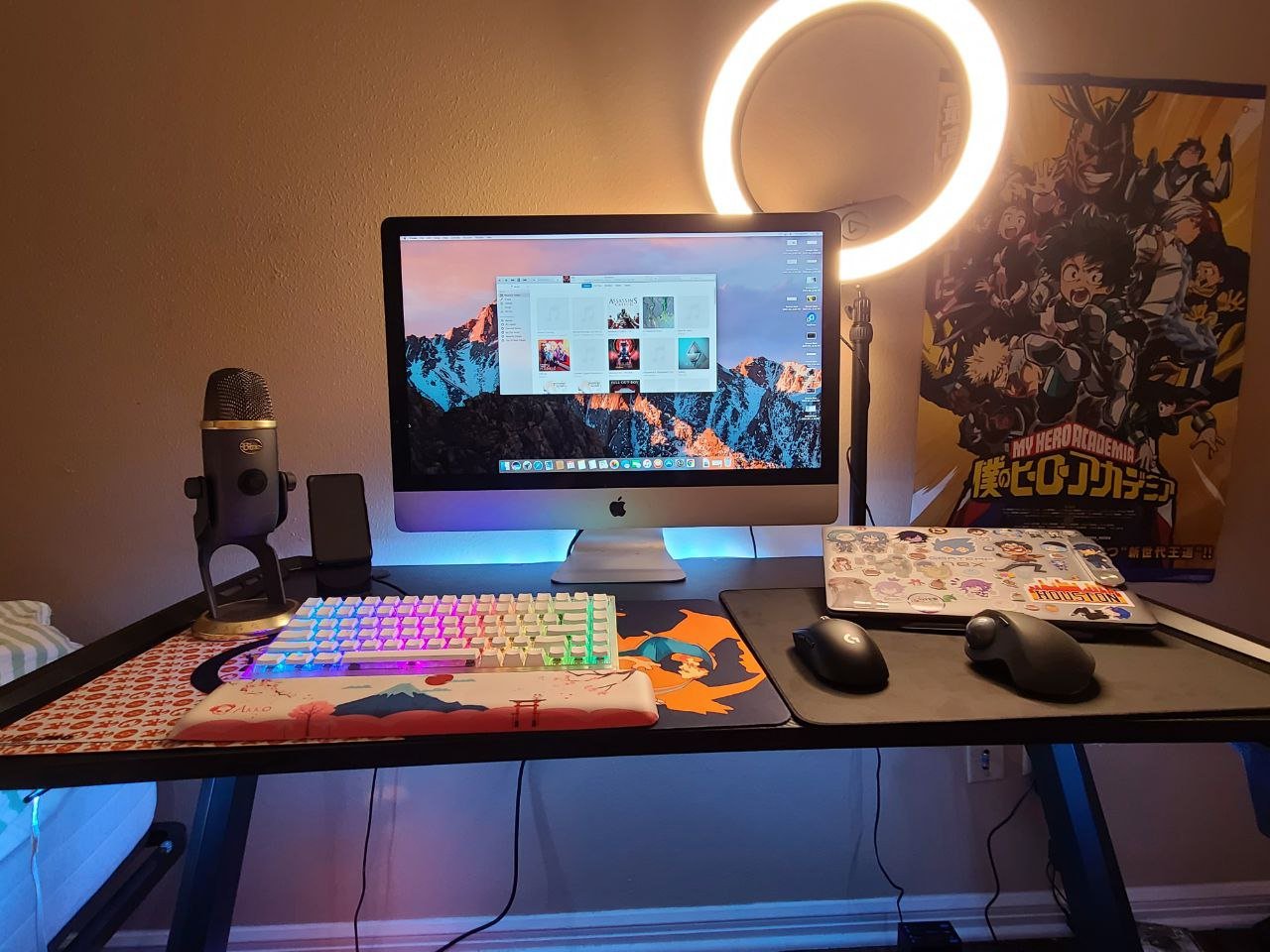 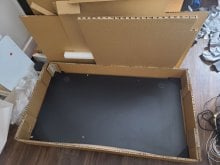 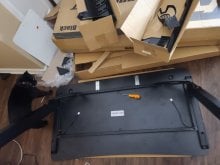 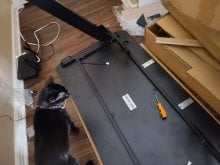 As a nice budget option, I could see the AndaSeat Masks doing well for those looking to get a cheap desk for their beginner PC gamer setup...except that the Masks isn't even closed to being budget-priced. Retailing at £269.99, that's just too high a price to pay for what's really just an "okay" quality desk with some RGBs tacked onto the sides. Obviously, when it comes to being able to do something yourself, most of the time it's cheaper to go through a DIY project, at the cost of the time that it takes to get the same quality you could get by paying a lot of money. Here, though, all you really need to do is buy a headphone hook, a cupholder, some screws, a cheap strip of RGBs, and an old desk from Goodwill to get the full effect that you do from the Masks desk, in the same time it'd take to build it in the first place. 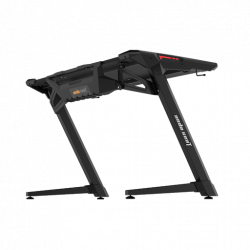