When it comes to kart racing games on Switch, your first and only thought is probably going to be 'Mario Kart 8 Deluxe'. After playing All-Star Fruit Racing on Switch, I don't think that's going to change any time soon.

​
All-Star Fruit Racing has been in early access on Steam for over six months. Over the course of those six months, the game has had largely positive reviews, mostly praising the similarities to Mario Kart and the art style. It's a shame, then, that none of these reviews seem to be apply to the Switch port.

All-Star Fruit Racing is a racing game with similar mechanics to Mario Kart; your goal for most of the courses is to come in first place. To assist you, you can use items, such as a tornado or a missile made of water. These items can be obtained in different ways, depending on the game-mode. On the ‘Random Juicer’ mode, the items work identically as they do in games like Mario Kart 8 or Sonic and Sega All-Stars Racing. In the ‘Juicer’ mode, though, there is a unique way to obtain and use items. By collecting four types of fruit, you can build up your 'Juicer' meters. Using these tanks of fruit, you can choose to use power-ups as you fill tanks, or to stockpile fruit to release more powerful attacks. Different combinations of fruits yield different items. Using the face buttons, you can choose to disconnect different tanks from your juicer, allowing you to keep an item on the back-burner if you so please. By filling all four of your Juicer tanks, you can unleash a powerful Mega-Juice move, which is unique to each character. This innovative system is the most stand-out feature of All-Star Fruit Racing. You can also drift around tight corners to gain a quick boost, which can stack with boosters on the course to give you a thrilling sense of speed. 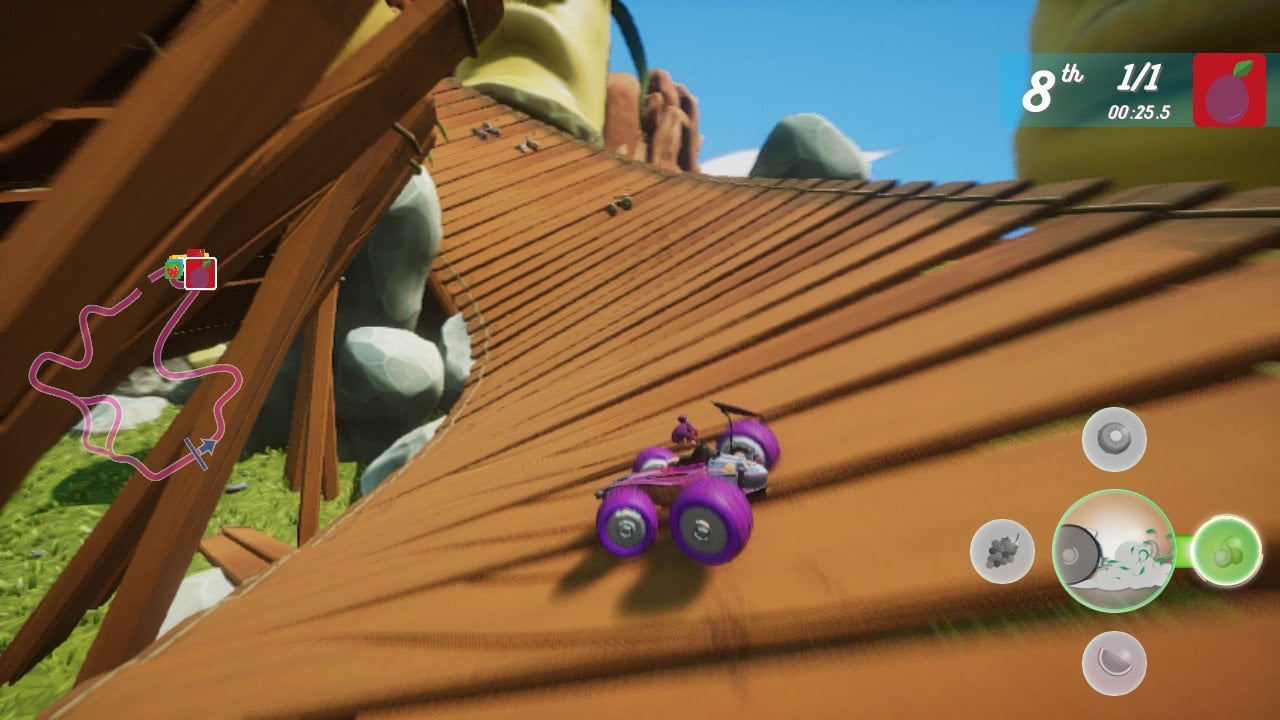 After first launching the game, you can choose to partake in the training mode. This mode explains how the Juicer system works, as well as the basic controls. It's a short and sweet tutorial, so I'd recommend giving it a try. After this, you're free to do whatever you want.


All-Star Fruit Racing has a career mode consisting of 11 cups. By winning and earning trophies, you can unlock new characters and new customisation options for your vehicle. These aesthetic choices don't affect how your car controls, which puts every player on a level field, but at the cost of diverse gameplay. In Mario Kart 8, for example, the expansive selections you could chose from completely change how your kart controls. The lack of game-changing customisation options here makes the game feel repetitive and stale, resulting in every race feeling the same. This is compounded by several courses, which, for no reason I can figure out, have five laps. These races go on for too long, and it's a design choice that continues to puzzle me. 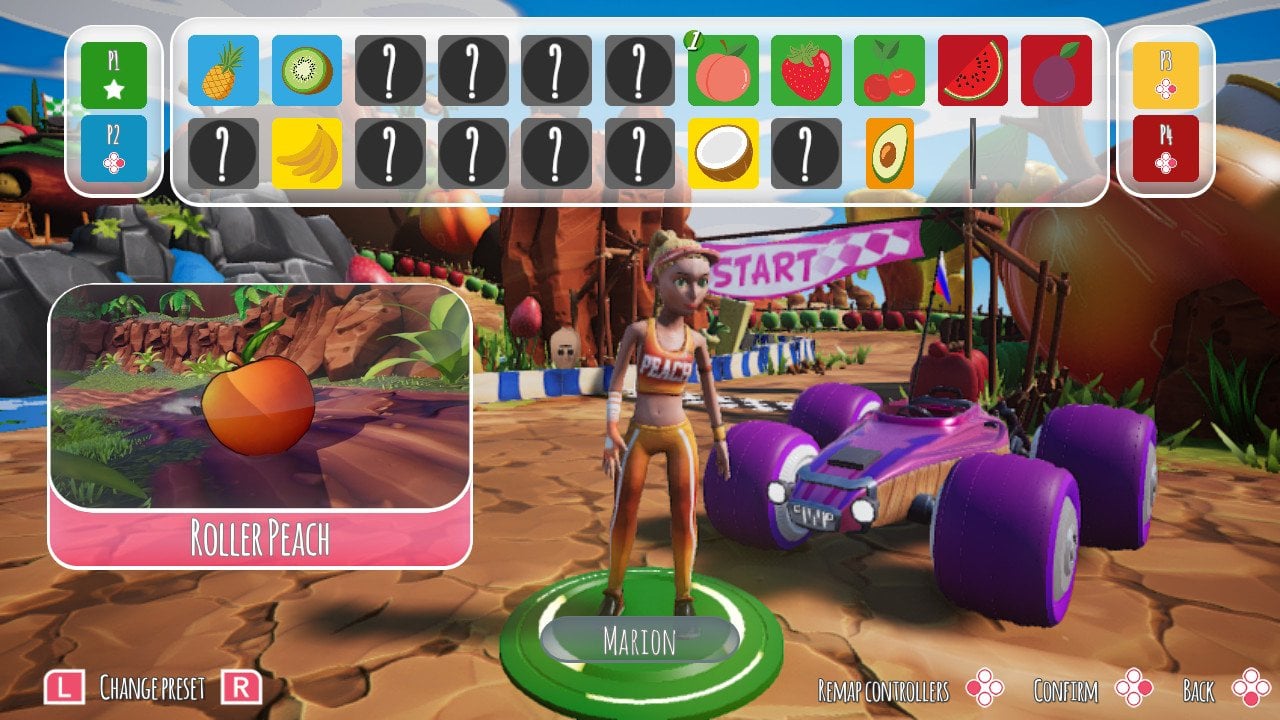 All-Star Fruit Racing has an aesthetic that leaves a lot to be desired. Watching videos of the PC version, the sacrifices made to the Switch version are made as clear as day. Shadows fade in just a few feet in front of your car, the resolution is low, and the special effects seem toned down. These sacrifices may have been understandable if the game at least ran at 60 frames per second. Unfortunately, the game doesn't even seem to keep up a solid 30 frames per second. To top it all off, the loading times are far beyond the realms of 'acceptable'. From the moment you launch the game, it takes almost two minutes to get to the main menu. It takes 46 seconds to go from this menu to a race, and over 30 seconds to transition to the next race. It's a shame that this unique racer is bogged down by performance issues. It's not surprising, though, as the developers don't seem to take the Switch version as seriously as the other platforms. Until last week, there weren't even plans to include an online mode on Switch, so I shouldn't be surprised that this port is half-baked.


For all the faults, the game still controls excellently. The buttons and analogue sticks are very responsive, and the drifting feels good, too. Unfortunately, I didn't find it too comfortable to play in handheld mode, as holding the ZR button to accelerate quickly made my hand cramp. The button to use items is the right toggle stick, which feels unnatural, as the stick is otherwise unused. An option to remap the buttons would be nice, and it could also take a cue from Mario Kart 8 Deluxe by incorporating an automatic acceleration option. 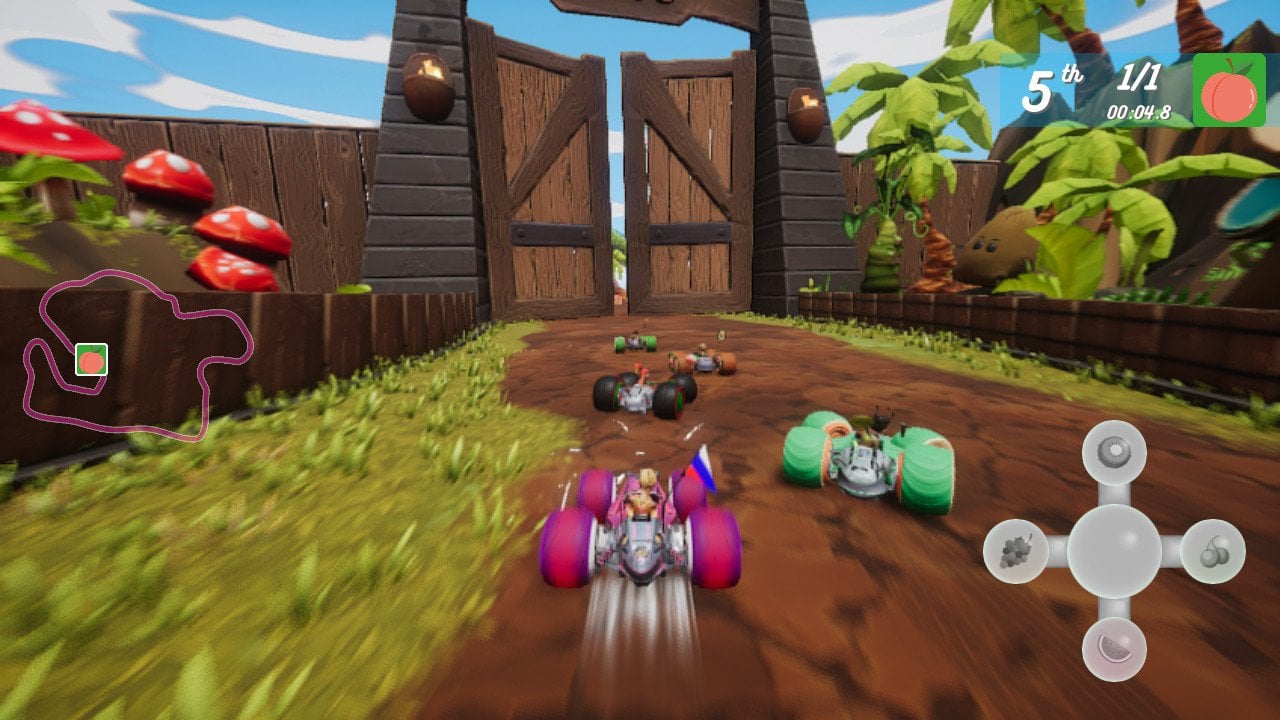 ​
Final Thoughts
Overall, I urge you to steer clear of purchasing this version of All-Star Fruit Racing. If you want a kart racer on your Switch, stick to Mario Kart 8 Deluxe. Truth be told, I think it could be fun on other platforms, but the Switch version is a chore to play. The sacrifices made to the graphics are impossible to ignore, and the abysmal loading times are just too much. If you want to play it, don't get it on Switch. 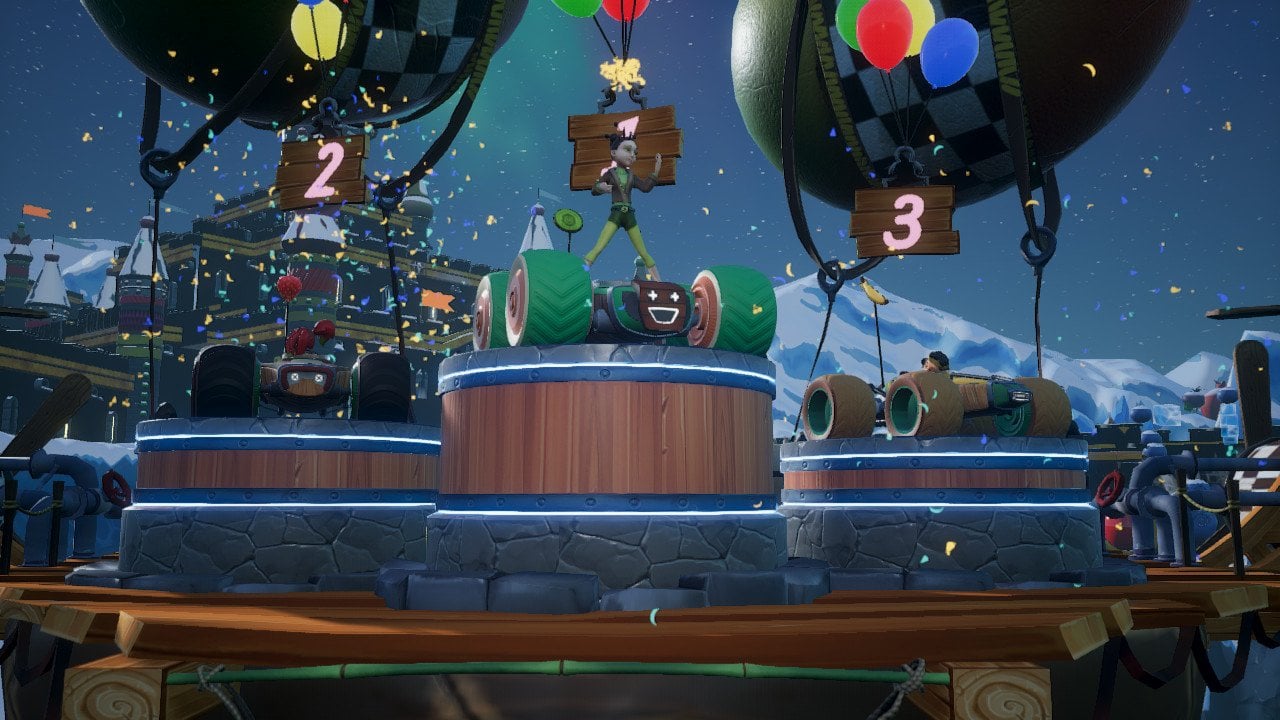