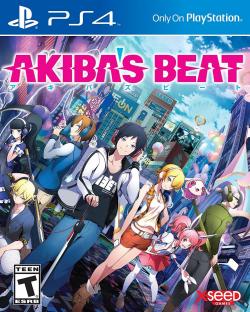 Let's dive into Acquire's third title in the "Akiba's" series and it's first trip into the Action JRPG genre.

In Akiba's Trip you play as the lazy, maid-cafe crawling NEET, Asahi Tachibana. The game starts with a mysterious figure claiming he will deal away with the pesky barrier separating desires from reality once and for all, bringing chaos to the world. After running late to meet up with his buddy for lunch, Asahi runs into a girl named Saki Hoshino. Along with her (incredibly annoying) familiar, Pinkun, she destroys Delusionscapes-- delusions that manifest themselves in the real world, corrupting it until the Grand Phantasm inside each one can be destroyed. Since Asahi can somehow see the Delusionscapes for what they are, she cons him into helping her defeat it, which he does, and afterwards they part ways. The next day, both are surprised to discover it is now Sunday again, and it is up to them to solve the mystery of the encroaching Delusions and the repeating day. 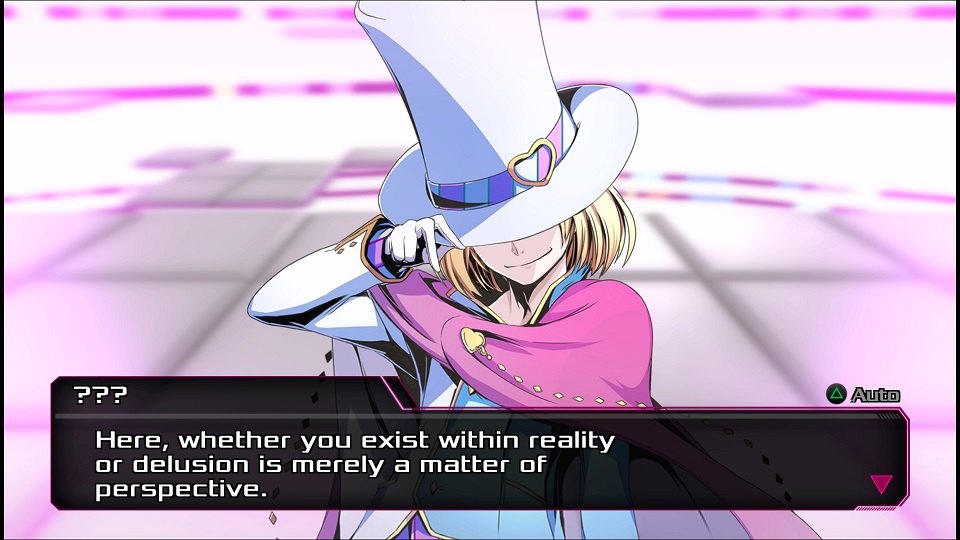 The gameplay is broken up into 3 different styles. Normally you would consider walking around and talking to other characters as just one kind of gameplay, but in Akiba's Beat the conversations turn into full-blown visual novel sections. The exploring sections give you a chance to travel around Akihabara, looking at the various shops with humorously altered names and traveling to your next way-point. The area to explore isn't that big, though you can unlock more of the city as you play, and there is a lot of loading between small sections of the city. I expect this is because they also developed this to run on the Vita, which has limited resources for loading large, detailed areas.

You gain the ability to quick-travel between the different areas of the city early on, and the places you need to go to advance the story are clearly indicated on your map. After you look around the first time, and aside from saving and visiting the stores to upgrade your gear or buy trading cards (that boost your stats), the appeal of running around is quickly lost. After the first 2 chapters, I found myself teleporting around to get to my next destination to avoid loading extra sections of the map and from having to wait for travel time from walking.

The visual novel sections are very nice and are a treat to play through compared to the rest of the game and have the option to switch between different languages. The Japanese voice acting is spot on, as usual, and the English audio is pretty good as well (more on that later). A major annoyance in the game is that these sections can be broken up by a need to talk to another character that is sometimes just a few steps away, which happens often and gets very annoying very quickly. It's pretty obvious that if the character sprite contains bright colors and doesn't talk like a mouth breathing weaboo, they will either be a major character or join the party at some point. Expect a lot of stereotypical *heavy breathing* from literally every citizen of Akihabara that does not play a major role in the storyline.

The dungeons (Delusionscapes) are again very small sections of very simplistic mazes that sometimes require you to touch an object to unlock a gate somewhere in the room. There is absolutely no complexity to be had here, and they get boring really quickly. Monsters are spread about the dungeon in a typical Tales fashion, but you don't actually have to do much grinding in the game and can just run past most of them. A huge problem that I have with this game is the repetition of these dungeons-- many of them you will need to traverse, backwards and forwards, 6 to 8 times with absolutely no change to the enemy level or difficulty and no other benefit than to advance the story. This knocked a lot of points off for me, and just felt like really unnecessary artificial filler.

The combat engine really excited me at first, it looked like a really good clone of the Tales combat engine; A linear action fighting system that can be switched to 3D by holding a button to free-roam. Holding a different direction while attacking or using an ability would change the combo or skill, and you could mash away until you run out of P.P. (which recharge fairly quickly when you aren't pressing buttons). The illusion quickly fell away as I realized that none of the combos were really effective over one type or another. Sure, there is some elemental weaknesses to the enemies but after 8 hours of gameplay and boosting my stats by over 1000% I was still only doing 12-34 points of damage with basic attacks to mundane enemies that seemed to have WAY too many hit points for their level. Every auto attack restores your ability meter by 1 point, and you can get multiple "assistants", one of which will restore your ability meter by a good chunk when it gets low, so unless you are really trying hard it's pretty impossible to run out of the resource for any length of time. You can fill up a special meter after making so many attacks, which kicks off a soundtrack of your choosing and multiplies the damage you can do in battle. I found myself only really using this for bosses though, since the dungeons were so short and the mobs very easy to kill.

After a while, it becomes apparent that you can set one of the girls to prioritize healing, slap on your ability restoring helper, and just spam the Square button for every battle. When your combo runs out, instead of wasting PP to use a dodge move, you can just hold the free-roam button and walk away from the enemy while your combo resets and your PP refills. The enemies never hit you because they are so dumb, and they do so little damage that your healer will just restore it and have her ability meter refilled nearly instantly. For boss battles, you switch it up by engaging the special meter, which you absolutely MUST use to get through their mountain of HP, but otherwise the combat is exactly the same. It really feels like they gave all the monsters massive HP pools just to extend your time in the dungeons, and they keep your damage very low for the same reason. 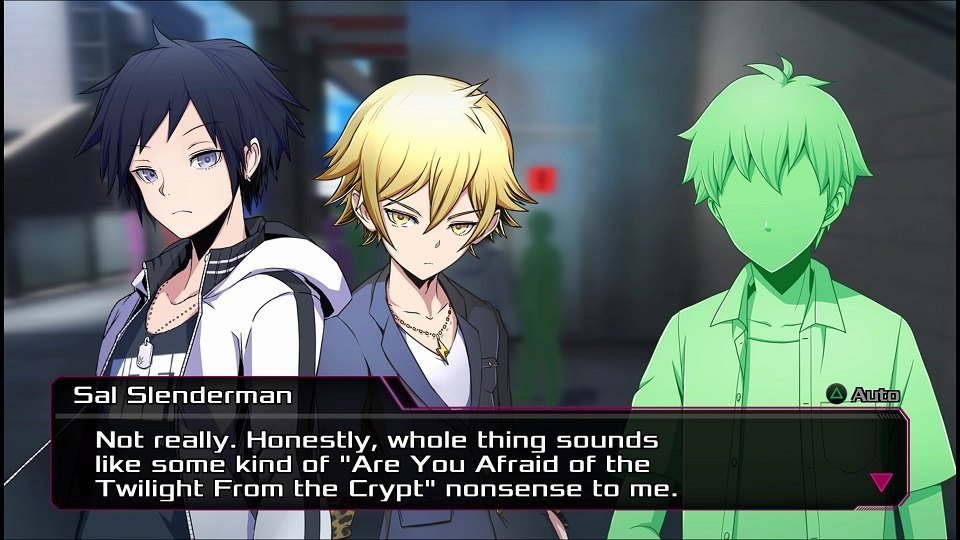 As I said prior, both of the audio tracks I tested were very nice, but when I attempted to mix the English subtitles with the Japanese audio, I nearly instantly regretted it. The translation team took some VERY heavy liberties with the script, throwing in a lot of western pop-culture and just flat out replacing entire lines of dialogue that really alter how the characters personalities come across. Even knowing just a little casual Japanese you will pick up on these changes very quickly, a simple "good night" turns into Asahi mocking his friend for acting like his mother. My advice is to either go one way or the other, but don't mix the two.

There is no audio tracks here that really stick with you, some of the special meter albums you can equip are pretty good, but that's about it.

Pinkun, equipped as an assistant, will drive you insane with his audio. Every time you walk past a store entrance, door, save point, or enemy, he will comment on it with one of 2 or 3 different phrases. Since you move around so much, you constantly have to listen to him yapping about this or that, it's actually several times worse than Navi. Luckily you get an assistant you can equip instead of him not too far into the game, and she has a much more subtle voice actress, though it's still annoyingly repetitive.

If you do pick up this game, prepare to be ear raped by the combat. You have 2-8 enemies making noises, their ability noises, your 4 characters making noises, along with their abilities, and your assistant's abilities. To put the cherry on top, all of them have voice lines as they run around, as well as a voice line where they call out the ability they are using, and includes your assistant chiming in every 2 seconds with a play-by-play of the action. ALL of it happens at once. They don't wait for another character to finish talking, they just talk over them. Throw in the extra loud music from the special meter and get ready to receive a migraine every time you enter combat. 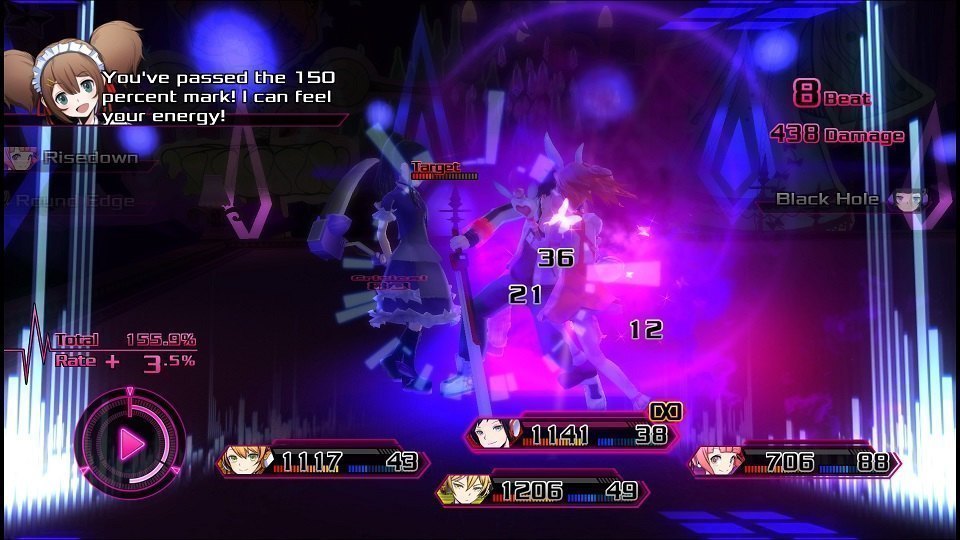 I really feel like they shot themselves in the foot keeping everything small so they could release it on the Vita as well. The 3D character models are very smooth and lack any real definition, supposedly to preserve polygon counts. I believe the Vita restrictions also caused them to re-use many of the dungeons and areas to get a reasonable play time out of the game. I really enjoy the art in the visual novel sections and in the anime cut-scenes, both are done very well. The sprites are pseudo-animated and their expressions change so wonderfully that this game could have been much better as a standalone visual novel. With such a thin storyline and dull combat, this may very well be the first and last JRPG entry of the series.

Verdict
You, matpower, TheKawaiiDesu and 2 others like this.
Unlike this review