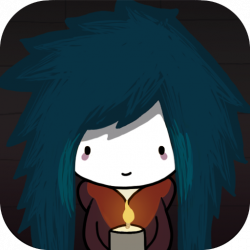 Single player
Local Multiplayer
Online Multiplayer
Co-operative
The butcher's knife cares not for the lamb's cry, but Agatha does.

Despite being almost a year old, Agatha Knife passed me by relatively unnoticed. Be it because it came from a lesser known developer, or found itself lost in the ocean of Steam's storefront, I was intrigued and excited when stumbling upon its jump to Nintendo Switch and Xbox One. Lifted from obscurity and pushed into the public eye, does it deserve its place in the light?

Starting the game for the first time, you're greeted with an upbeat rhythmic horn, soon bursting into a mysterious and enticing title theme. Accompanying it is this story's protagonist—Agatha. This title screen is simple, and as an odd critique, surprisingly difficult to read. Featuring the handwriting of this blue-haired seven year old, it puts a personal and childlike feel to the game, something echoed throughout. It paints a theme of innocence and unknowing, a stark contrast to the satanic symbolism occupying the rest of the screen. Should you find Agatha's writing too difficult to read, it should be noted the option is given for a clearer font. 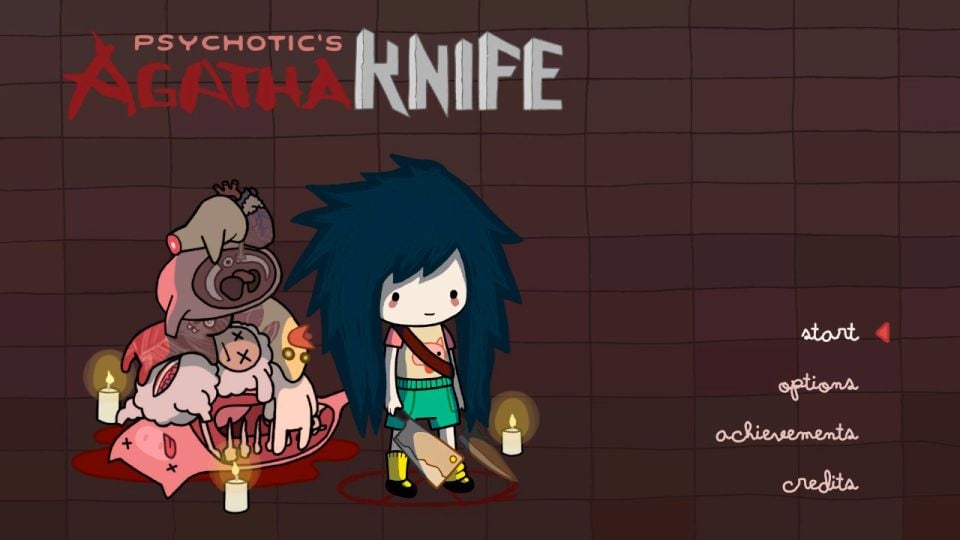 A short monologue introduces you to the premise of the game, as well as its restless protagonist. Agatha isn't quite like other seven year olds; where others may spend time playing games, or reading books, she helps her mother run the family butchers. Out of love, she spends her days playing with the animals as they come and go, and ultimately cuts them up ready to be sold. To an outsider, it may be seen as cruel, sickening even for a seven year old to be doing such things, but to Agatha, it is her nirvana. She loves what she does, but wishes for the animals to share in her passion. With low sales plaguing the butchers, Agatha and mother head to church, in hope an answer lies in faith. 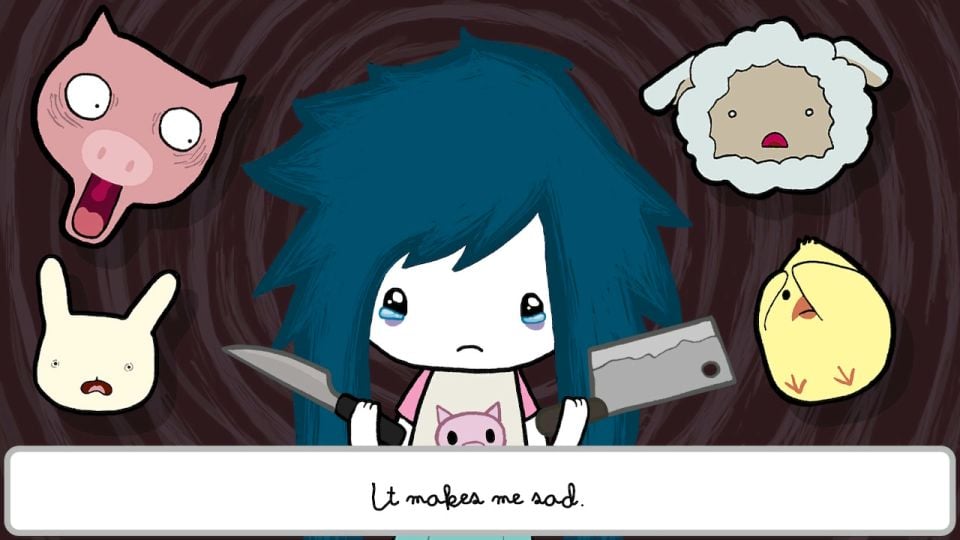 This setup is perhaps the strangest I've seen in recent years. While the overarching problem is quite generic in nature, it thrives because of Agatha. It thrives because the writers so perfectly captured the essence of childhood, innocence, and unknowing, before warping it to fit our blue-haired insomniac. The difficult to read font mentioned previously enforces this further; this is the story of a child, and this fact elevates the narrative far beyond anything I could have anticipated. It allows the writers a certain liberty to remind you just how twisted some of your actions are, amplifying the humour, the quips, and the symbolism.

The vessel to accommodate this journey into faith is a relatively standard point and click environment. While it took me a few moments to figure out, the controls soon felt natural. Playing with the Joy Cons, you use the right stick to move the cursor on-screen, investigating and puzzle-solving to progress with the story. I felt the control scheme far more natural when playing with the touch screen, but ultimately had no issues using buttons beyond the occasional incorrect press. Everything here is as to be expected; there's nothing particularly revolutionary, nor does there need to be. 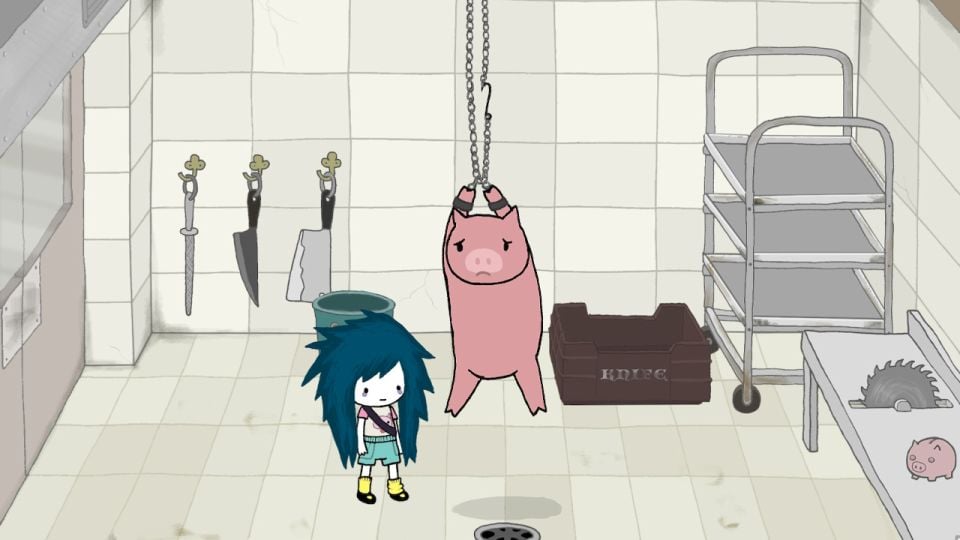 A Short Street and a Big Story

Set on a short street of an unnamed town, the world of Agatha Knife is easy to be drawn into. Rich in pop culture references, it feels familiar, and yet disconnected from any rational sense of reality. It features the unusual as everyday and makes you want to understand just why such a place exists. Each strange element calls out to you, it cries to be understood, to be interacted with. Each place and parody pulls you in further, leaving you hanging on every hand-written text box. 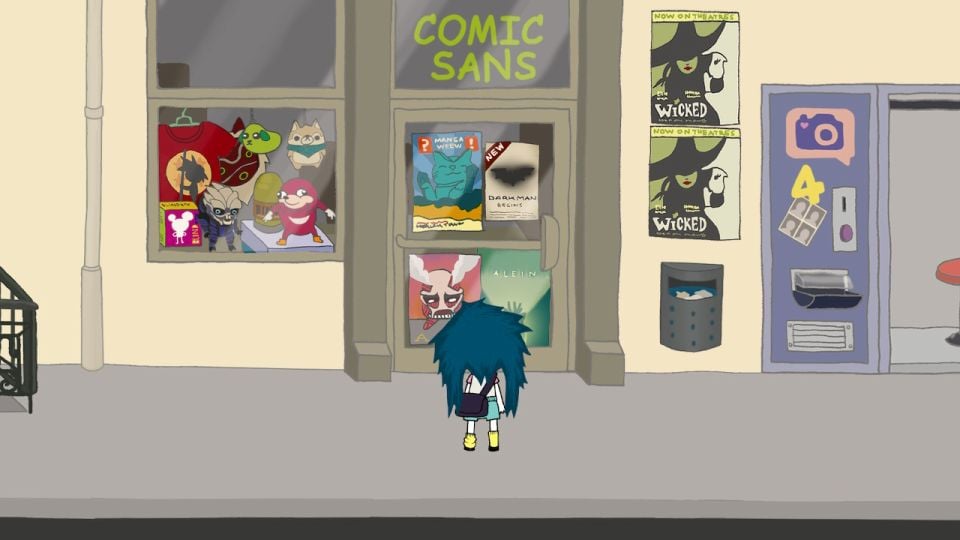 The size of the world is well suited to the game, limiting frustration if a puzzle isn't immediately obvious. In such a situation, a world too large would present far too many options to investigate and could ultimately drive people away. As somebody who rarely plays point and click games, I ran into this issue a few times, and was swiftly set back on the right path after a minor sleuthing session. If all else fails, the game presents you with one final hint in Awesome Sandro's fortune telling skills. Though incredibly obscure, they present the same solution as a separate puzzle. I found this an interesting approach, even if I rarely had to use it.

If you are a person who values a game by how many hours you can play it for, Agatha Knife may not be for you. My playthrough lasting just over four hours, I can see how some may be put off. If you can look past this and judge the game for the story it tells, the experience it provides, I am certain you will not be disappointed. Through its twisted themes and cleverly crafted puzzles, it presents an adventure I am sure will be fondly in my memories for years to come. 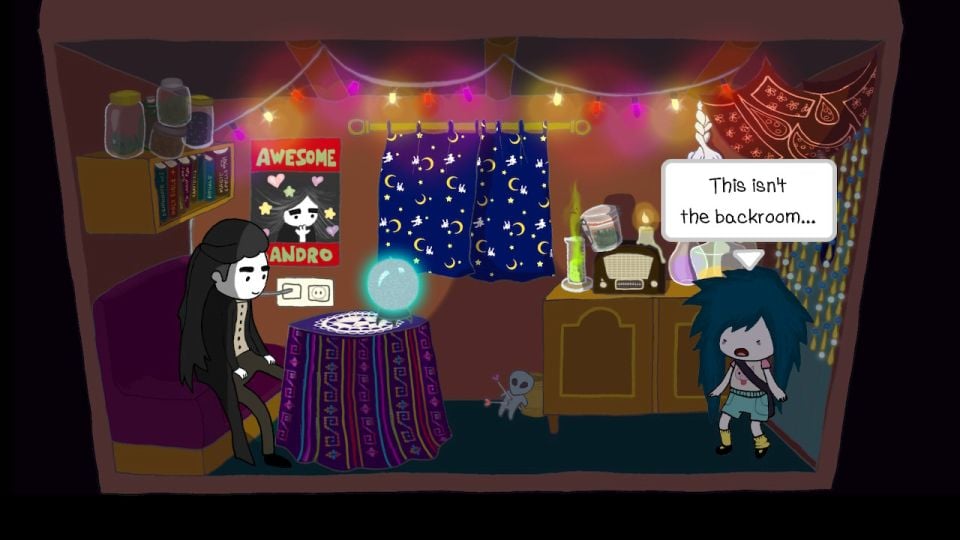 What We Liked ...
What We Didn't Like ...
7
Gameplay
There is nothing particularly revolutionary to the game when it comes to how it plays. Mechanically speaking, each part is standard; precisely what you might expect from point and click. This is neither to its merit nor detriment, providing a suitable frame to accommodate the masterful narrative and obscure themes.
9
Presentation
The art style for Agatha Knife is fitting for Mango Protocol's Psychotic Adventures. If you've played their previous title MechaNika, the world and theme will feel familiar and expected. For those going in fresh, expect to see an emotive and animated characters in a wonderfully crafted world.
9
Lasting Appeal
Agatha Knife is a memorable game. From its intentionally diverse and radical cast of characters to its obscure references, and especially its cynical and childlike look on religion. While not the longest of games, the ride it takes you on is well worth the price of a ticket.
8.8
out of 10

From so much as watching its trailer, Agatha Knife had me hooked. From start to end, it is packed with content to make you laugh, shudder, and truly make you question your outlook on religion and humanity. It is a must-buy for any fans of point and click, or just those looking for a dark ride down a humorous street.
Reactions: Akuseru06, DeoNaught, Devin and 1 other person
Share:
Facebook Twitter Reddit Pinterest Tumblr WhatsApp Email Share Link
I'm wondering why they went with "early 2000s newgrounds flash game" as their visual template...but other than that, looks like brilliant fun.
Reactions: Taffy and Scarlet

osaka35 said:
I'm wondering why they went with "early 2000s newgrounds flash game" as their visual template...but other than that, looks like brilliant fun.
Click to expand...

Well a child isn't going to have a 4K mind, are they?
I think it fits the theme well, it reminds me of a demented child's imagination, it has detail, but not too much. it's what the child see's, and what they take of it.
Reactions: BLOCKMINER3000 and Taffy

DeoNaught said:
Well a child isn't going to have a 4K mind, are they?
I think it fits the theme well, it reminds me of a demented child's imagination, it has detail, but not too much. it's what the child see's, and what they take of it.
Click to expand...

I think this is more imposing the current "early internet era adolescence" viewpoint into the work rather than an intentional design decision. It was how many people who were "in" on the internet remember the early internet from when they were younger.

If I were going to make any argument that is possibly similar, it would be that it is reminiscent of an average child's drawing turned filled flat shade. Then again, this is exactly the simple type of art that flash allowed for in the early internet. In this case, I think its a source of similar cause rather than direct cause.
Reactions: DeoNaught
Sadly, this disgusts me in so many ways that I'll pass.

Great review though. :-)
Interesting art style and concept. If they had gone with a more serious art style that would have made it a lot darker, but the cutesy art style just makes it seem funny instead.

The Real Jdbye said:
Interesting art style and concept. If they had gone with a more serious art style that would have made it a lot darker, but the cutesy art style just makes it seem funny instead.
Click to expand...

It's in this contrast the game really finds itself though. It's present in almost every aspect of it; Agatha's childlike innocence and her love for animals, clashing with her desire to slaughter and eat them. The art style just goes further in enforcing how strange and disconnected everything is.
Reactions: DeoNaught and The Real Jdbye
It is pretty dark for me so i won't play it
But very nice review.