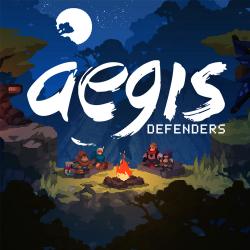 Action adventure platforming isn't exactly a new genre, and even though it's a tried and true formula - it's not guaranteed to be a hit. It has to have that little something extra, something making the game stand out. Tower Defense styled games aren't new either by now, generally you just build some kind of attacking turret on the side of a pathway that the enemies come walking on, trying to prevent them reaching the other side. This is something that can really force you to think hard about your next move. Now comes Aegis Defenders and combines the two genres into something new - but is it enough to make it fresh and exciting?

Clu! Wait for me!

The game starts off with the hunter Clu and her engineering grandfather Bart looking for artifacts to sell for Credits, as well as something to save their village from an enemy empire. You are immediately thrown into the first stage which works as a tutorial. Right away you see something exciting if you backtrack a little, and you are rewarded with some Credits, all to show you that exploration might be rewarding. At first you are only controlling Clu, learning to jump and shoot, how to collect resources, build bombs and how to fight enemies effectively. Clu is dressed in blue, and fires blue bullets, these are effective against blue enemies, while Bart has his yellow coat and hammer to use against the yellow enemies. After a short while you will come to a stop because of a door that is in your way, and there's no button around to open it up! This is when you'll call for trusty old grandpa for some help. You switch to Bart with the press of a button and progress from where he was standing all this time. This is a really important character, since he builds blocks and turrets as long as you have the resources. Eventually you will find a button to let Clu progress, and the characters help each other out this way until they finally meet up.

Wait, this is all assuming you are playing alone. If you are playing with a friend, you play simultaneously in a dynamic split-screen fashion. The position of the screen split is depending on where the characters are in relation to each other (or not split at all if they are together). Playing it this way really speeds things up, as you don't have to have one character stand idle while playing with the other one. Note that you can play alone, and change to co-op mode and back on the fly. Just give a controller to your friend, and you can immediately continue in 2 player mode. 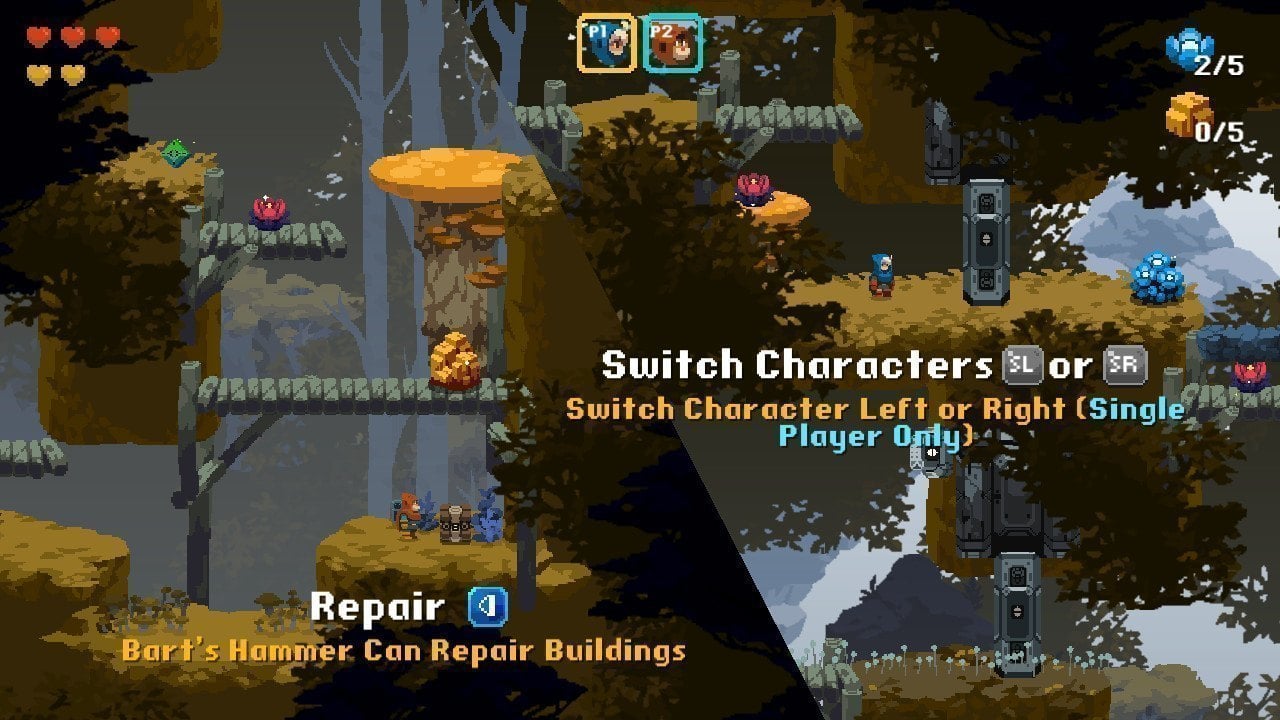 Now that you are at the end of the stage, you find an interesting artifact in the middle of a large room just before the ground starts to shake and a swarm of enemies announce their incoming presence. This is where the Tower Defense style comes into play. You have 60 seconds to gather resources which are very limited and build your traps and turrets. You build blocks with one yellow resource, and fuse it with another block to create a turret that shoots the incoming enemies. You don't have to fuse it right away, so if you lack resources right now, you can always fuse it later. Clu can build bombs that deals heavy damage to one or a group of enemies, but is gone when it's used. If you feel that you are done before the time limit is up, feel free to activate the artifact and convert the remaining seconds into Credits. Now it's time to fight off the first wave of enemies! You do not only rely on the traps and turrets here, but on your own weapons and dexterity as well. 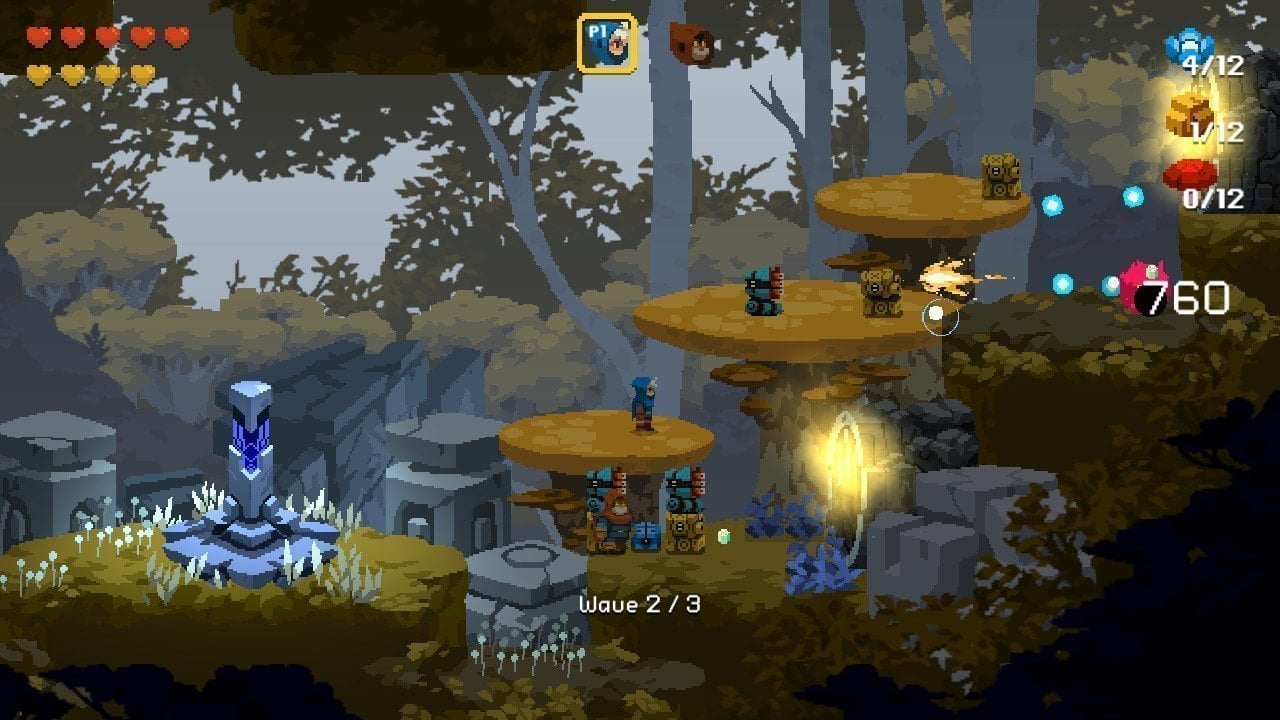 When the first wave is defeated the timer returns, resources are renewed, and you can build some more. You will get hints on where the enemies will come from, and which colors they mostly will have, so you have a fair chance to plan your strategy without relying on trial and error. There are even more action oriented elements to this, since there can be a blue enemy with a yellow shield that can only be broken by Bart's hammer for example. You have to keep an eye out, see these enemies, run to it and destroy the shield before the turrets can deal damage to it. There's no time to stand around doing nothing! 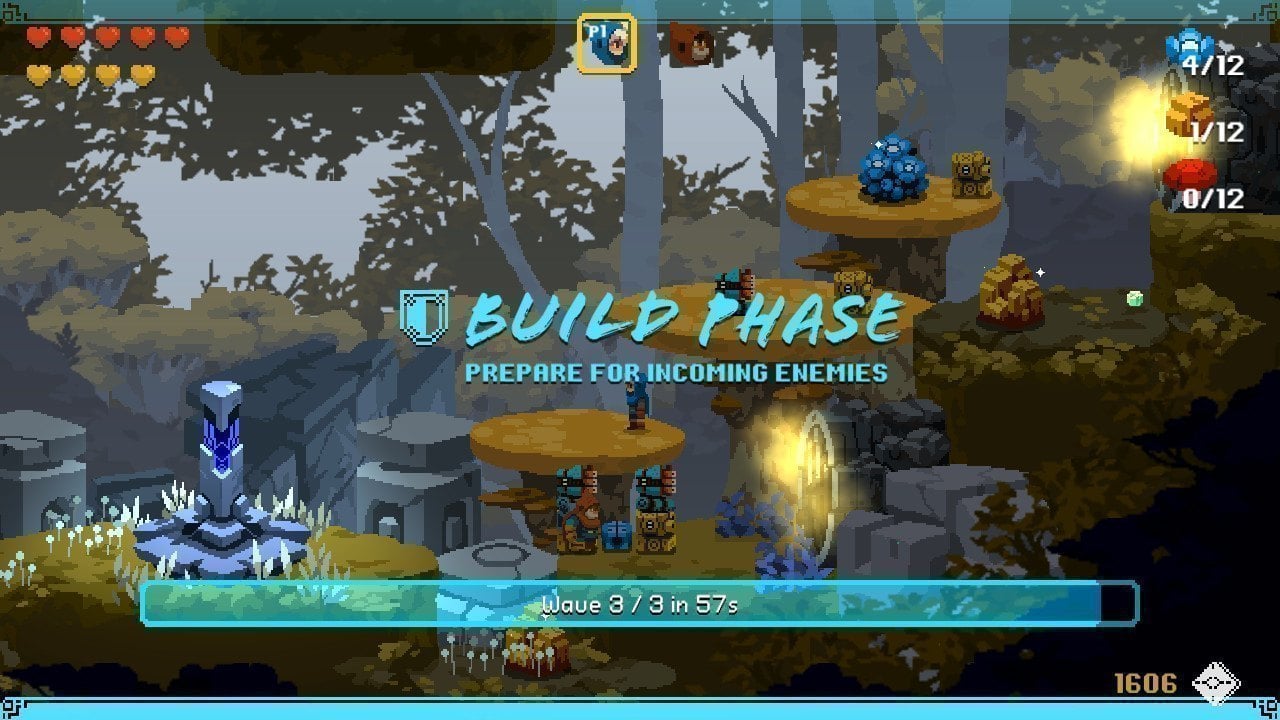 With the Credits you gain, you can buy new and upgrade your current weapons. Clu can get a red weapon, to deal with red enemies for example and Bart can get a blue shovel that not only deals blue damage, but harvests resources faster! You also get RP by fulfilling certain tasks while beating a stage, or when answering to questions in dialogues. These are more limited and can't be farmed unlike the Credits which you can get plenty of by replaying a stage over and over. You use these RP to buy and upgrade traps and turrets. Since RP are limited, make sure to spend it wisely. Here is also one of the few shortcomings, what do I gain by upgrading the weapons and traps? The info is not presented clearly, because either the stats show what the current level have, and you don't know what an upgrade will do - or if it is the other way around, you know what it would be if you upgrade, but not what you actually have now.

Clu and her grandfather are quickly driven to enter enemy territory to search for the Aegis, an ancient weapon that might just be their best bet at saving their village. Along the way they meet other characters, and you will be able to play with up to 4 characters with their own special abilities and weapons. Now there are even more elements to consider when planning your fights. Build a fire that you can shoot through to set enemies on fire, or to burn down wood to find hidden secrets. The whole journey is made with the loveliest and most tasteful hand drawn pixel art, hand crafted levels (no random generation here) coupled with a high quality orchestral score that brings your thoughts to classics like Secret of Mana, ActRaiser and Chrono Trigger, making it all a feast for both eyes and ears. The stages uses lighting and several layers of parallax scrolling to create an intense feeling of depth, as well as making sure everything looks like it belongs in this world. Nothing pops out because such an attention to detail was used to make it all uniform.

All in all, this is a fantastic game that will let you enjoy 18 stages of heart pounding strategic action, puzzles and exploration in gorgeous environments while smooth and engaging music caress your ears. There are three difficulty levels for you to master, and different strategies to try out, compensating for the somewhat short game (the developers estimate between 8 and 10 hours to beat it). Bonus points for having fully configurable controls.

I encountered one crash and one soft-lock when playing, as well as the button placement for confirmation and cancel swap places if you play in docked mode or handheld mode. These issues were fixed in a day 1 patch!

Check out the launch trailer!

What We Liked ...
What We Didn't Like ...
8
Gameplay
Fun platforming exploration with some puzzle solving, leading up to a hectic action filled strategy section with barely any time to breathe. When at its most hectic, it's easy to forget which button does what and accidentally build something you didn't mean to, or swap to a character instead of changing weapon.
9
Presentation
Looks absolutely amazing. It's not the tired old "pixels because it's easy" route, but layer upon layer of parallax scrolling, hand drawn pixel art. Everything with great detail on how to make it all fit in the world. The music is very nice, and oozes quality. Just listening to the orchestrated soundtrack makes you think of nature with hints of Secret of Mana.
9
Lasting Appeal
18 stages, 3 difficulty settings. It doesn't sound like much, but there's enough to keep you busy! Different answers in dialogues can give you some bonus points, something to keep in mind for subsequent playthroughs. And you can replay any stage to grind for some more Credits, or to complete any tasks you missed out on the first time through.
9.1
out of 10

A fantastic game that looks and sounds great, and more importantly, it's really fun! Highly recommended.
Reactions: AlmostBadKoala, Chary, zeldaism and 6 others
Share:
Facebook Twitter Reddit Pinterest Tumblr WhatsApp Email Share Link
Man, this game sounds awesome! Def getting it right now for my Switch. Can't wait to bring this to my brother's house and do some co-op! Great review yo.
+ Stunning graphics

Yeah, stunning giant pixels, never saw that before, so retro, much unique.
Click to expand...

Yeah, stunning comment, never saw that by you before, so jaded, much unnecessary.

On topic: I have a 20% off coupon (in Steam) for this game. I'm not interested in it, but if anyone is after reading this review, hit me up. The coupon says "20% OFF Aegis Defenders for Hollow Knight owners" but you'd think they just wouldn't send it to me if I didn't own Hollow Knight, i.e. YMMV.
Reactions: AlmostBadKoala and sarkwalvein

Pedeadstrian said:
On topic: I have a 20% off coupon (in Steam) for this game. I'm not interested in it, but if anyone is after reading this review, hit me up. The coupon says "20% OFF Aegis Defenders for Hollow Knight owners" but you'd think they just wouldn't send it to me if I didn't own Hollow Knight, i.e. YMMV.
Click to expand...

Awesome, now that you mention it I've got one in my Steam inventory too. This seems like a good one to get on Switch, though.
This looks like a fun game! Tempted to get it later on down the road to play. Also always nice to see a kickstarter live up to its campaign and turn out good!
I recommend the Switch version because of portability and since you always have two controllers if you ever want to post with friends
But then again, it's only the switch version I've tried so...

Also, there's a difference between pixel art and pixel art. Sometimes it's cheap. Sometimes it's nostalgia wanking, or downright lazy. Sometimes it's super detailed, and beautifully put toghether "by hand".
Owlboy is another example of a beautiful pixel art game.
Reactions: zeldaism, Xabring and Xzi
Of all the "elements" to bring into a game I did not expect tower defence elements to be the next big one. Probably should have as it is an awesome concept, might have been more that it seemed to die with rampart and be largely forgotten.