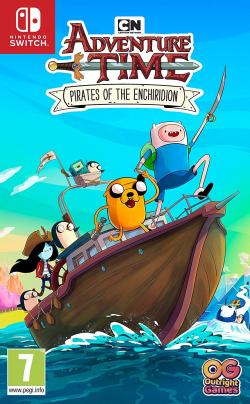 Adventure Time video games aren't usually something to write home about. They're often bland, boring, or just uninteresting. With comedy and writing faithful to the source content, Adventure Time: Pirates of the Enchiridion joins the small list of Adventure Time games worth playing.

This review contains spoilers, and a copy of the game was provided by the developers.
​
When Adventure Time: Pirates of the Enchiridion was first revealed, I was incredibly excited. The prospect of exploring the expansive world of Ooo was something I've dreamt of for years. While the game doesn't completely fulfil this dream of mine, it does give an idea of what such a game could be like.


Pirates of the Enchiridion is a turn-based Role-Playing game which dips its toes into platforming. In the overworld, you explore various kingdoms and islands from the show. These locations dabble with some minor platforming elements, but fail to create any sort of challenge for the player. In the battles, each character takes turns to attack. During each turn, you can decide to attack, defend, use a special attack, or to run. You can also use an item once per turn. It's a simple system that's easy to learn, but is ultimately very shallow. At the top of the screen, you are presented with an energy bar. Using energy, you can use powerful special attacks, which can do far more damage, as well as inflict status effects on enemies. 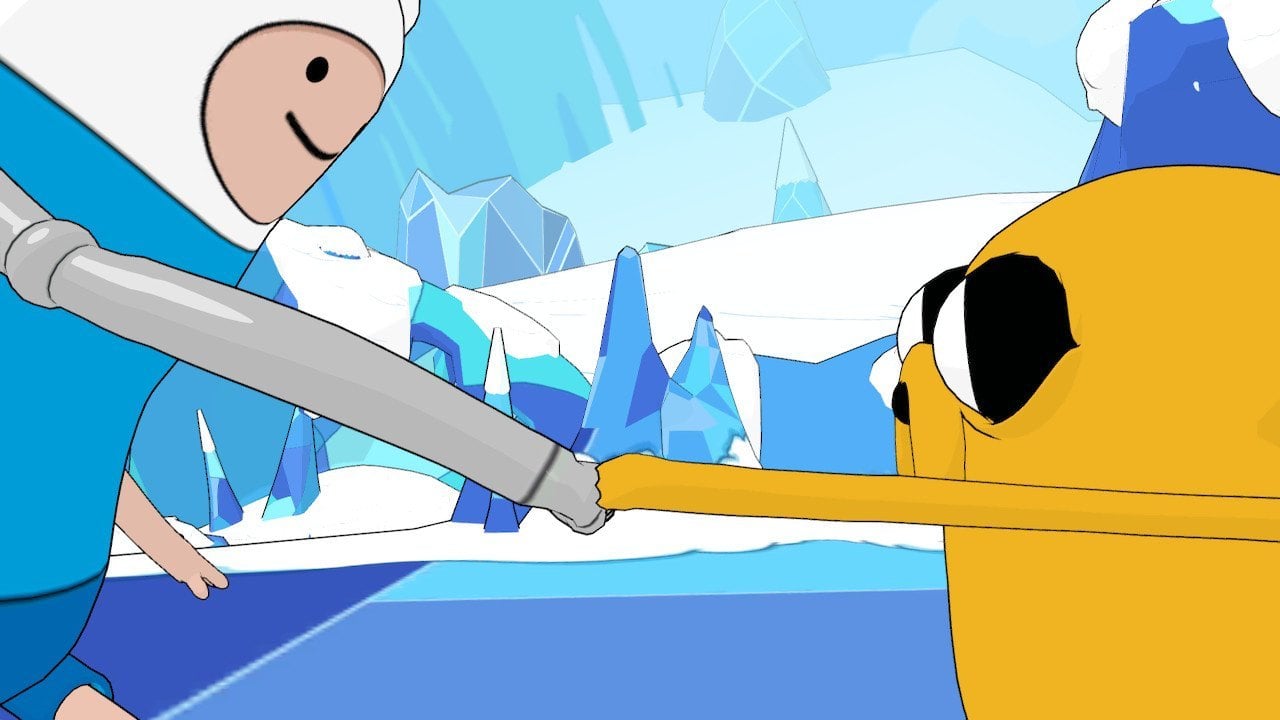 ​
Gameplay
There are four playable characters; Finn, Jake, Marceline, and BMO. Both Finn and Jake play similarly to each other, and can defend themselves instead of attacking. This is practically useless, so I never used it outside of the tutorial. Marceline and BMO, however, are unique characters that expand the basic battle system to make fights more enjoyable. Marceline, who you unlock early in the game, can heal herself. This is something that I wish you could use on other characters, too, as I found myself using healing items regularly. BMO, who you unlock further in, acts as a support character. BMO can scan enemies, inflict status effects, and recharge the energy gauge. BMO and Marceline are interesting characters with unique abilities, but they're the only additional characters available. It would have been nice to recruit other characters with unique abilities. This would have introduced another layer to the combat, as you'd have to decide which character would be best for each situation. I would have liked to see Princess Bubblegum and Lemongrab playable, for instance.

The game is sometimes described as having an open world. This is an inaccurate description. Despite how open the game may seem to be, very little is left open-ended. Side-quests are often simple, and very similar to each other, making them feel pointless and repetitive. There are very few optional locations, and these places don't even have much of a reason to exist. Prismo's Time Room, for example, is a neat place to visit, but there doesn't seem to be much of a reason to go there, other than to start a side-quest. It's not necessarily a bad thing, but Pirates of the Enchiridion is a linear game through and through. 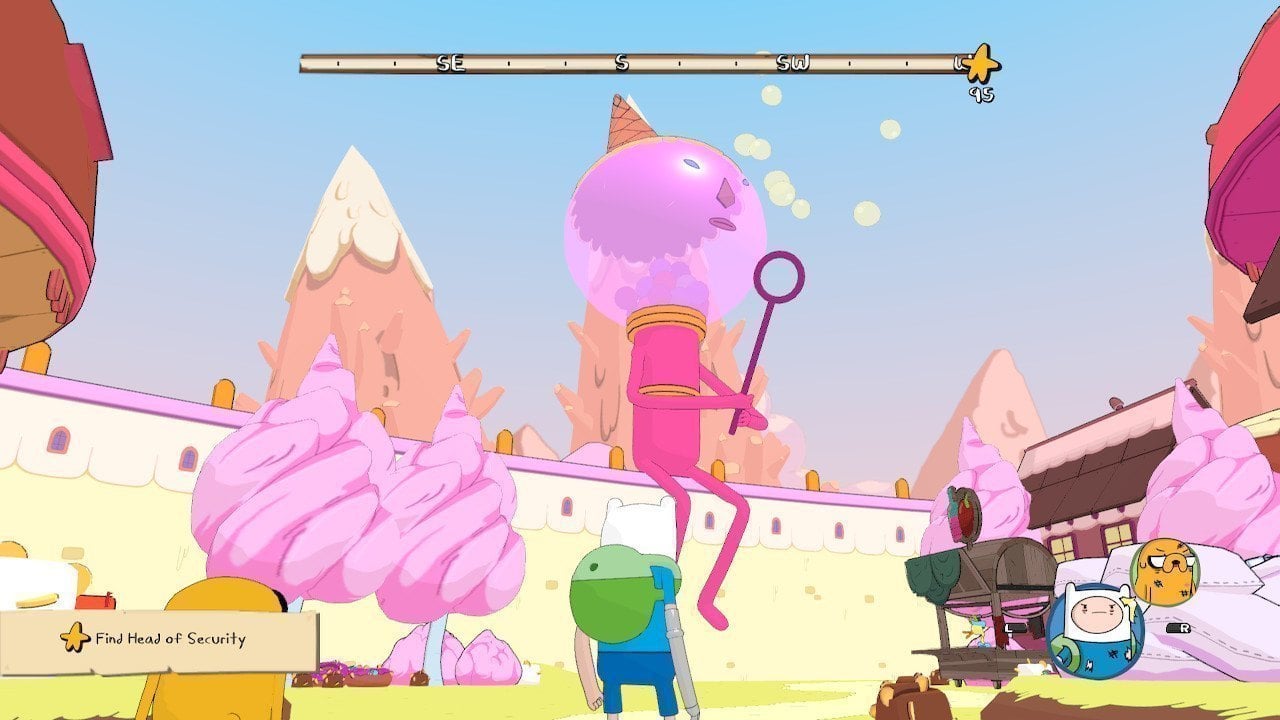 The plot of Pirates of the Enchiridion is comparable to earlier episodes of Adventure Time. The land of Ooo has been flooded by a melting Ice Kingdom, so Finn and Jake head out into the newly formed ocean. As you continue the story, you meet many familiar faces, such as Lumpy Space Princess and Fern. I was pleasantly surprised that the game made use of some of the newer characters in the series, such as the main antagonist, Uncle Gumbald. Finn and Jake eventually learn that someone has the Enchiridion, and is using it to flood Ooo. At the end of the game, it is revealed to be Uncle Gumbald, as well as Cousin Chicle and Aunt Lolly. Unfortunately, there isn't very much depth to the plan, and the game ends shortly after defeating Gumbald. Overall, the story isn't very impressive. What is impressive, though, is how true the dialogue and humour stay to the animated show. I often found myself laughing at quips by Jake, such as "We usually solve our problems in eleven minutes or so" or "I'm sure by our next adventure, we'll have all forgotten about this." I also enjoyed the numerous references to episodes of the show. Most of the original voice cast reprise their roles, further immersing the player in the world. Playing Pirates of the Enchiridion is like playing one of the earlier episodes of Adventure Time. It is carefree, fun, and there is little at stake. That said, it is short, and I feel as if there could have been a lot more content. A fight with Aunt Lolly and Cousin Chicle would have been fun, but the game ends shortly after beating Gumbald. 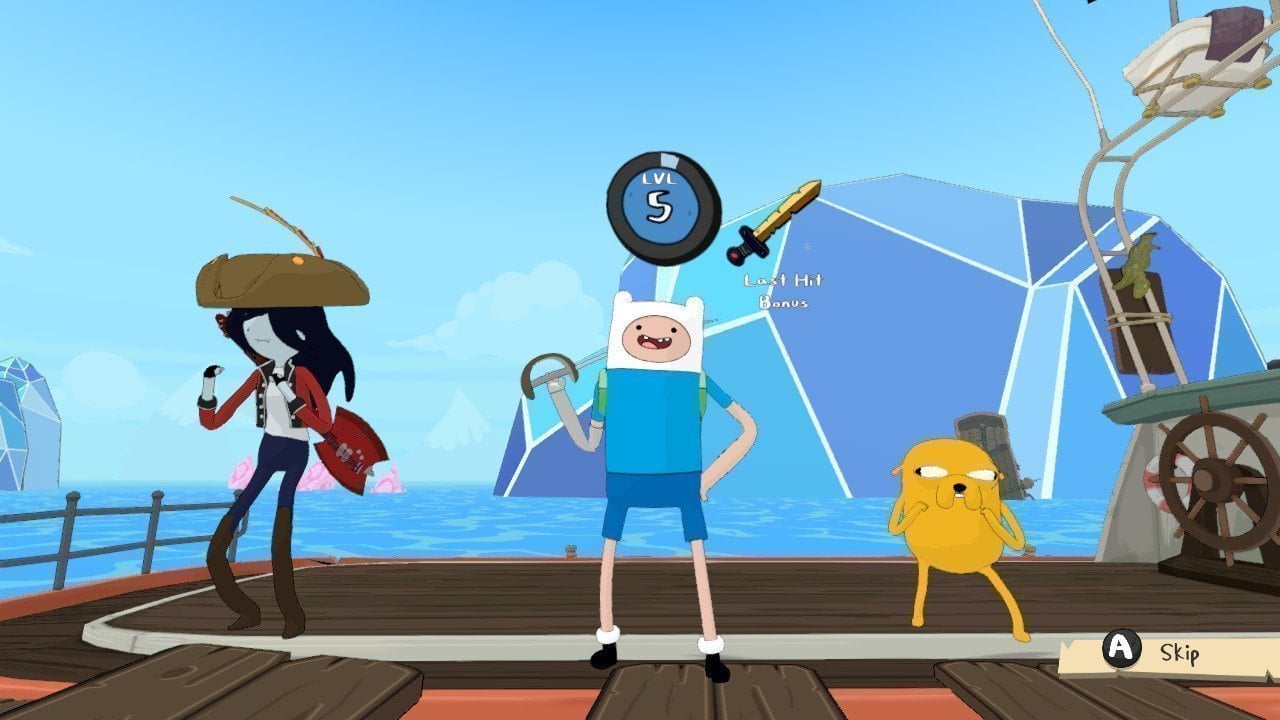 ​
Presentation
Visually, the game is faithful to the show. I was initially sceptical of the art style, but upon playing the game, it grew on me. It fits the Adventure Time universe well, and each kingdom was a pleasure to explore. The performance isn't the best, running at 30 frames per second with the occasional (very large) frame drop, but it's not unplayable. Starting the game from the Switch home menu takes a long time, but once you're in, the load times are fine too. Overall, it could have been better, but thanks to the simplistic art style, it looks great even on Switch.

There is an unfortunate lack of variety in the music of Pirates of the Enchiridion. The music that is in the game, though, is great. Every track seems to be inspired by the show, so much so that I found myself vividly remembering episodes that similar music was featured in. For example, the victory music is based on the song from the episode 'Guardians of Sunshine.' Sometimes when sailing, no music would play at all, and I couldn't help but compare the game to The Legend of Zelda: Wind Waker, which features beautiful music at every turn. As mentioned before, the voice acting is phenomenal. There are even songs that the cast sing when starting a new mission, which can be fun. The sounds of the waves do sometimes drown the dialogue out, though. 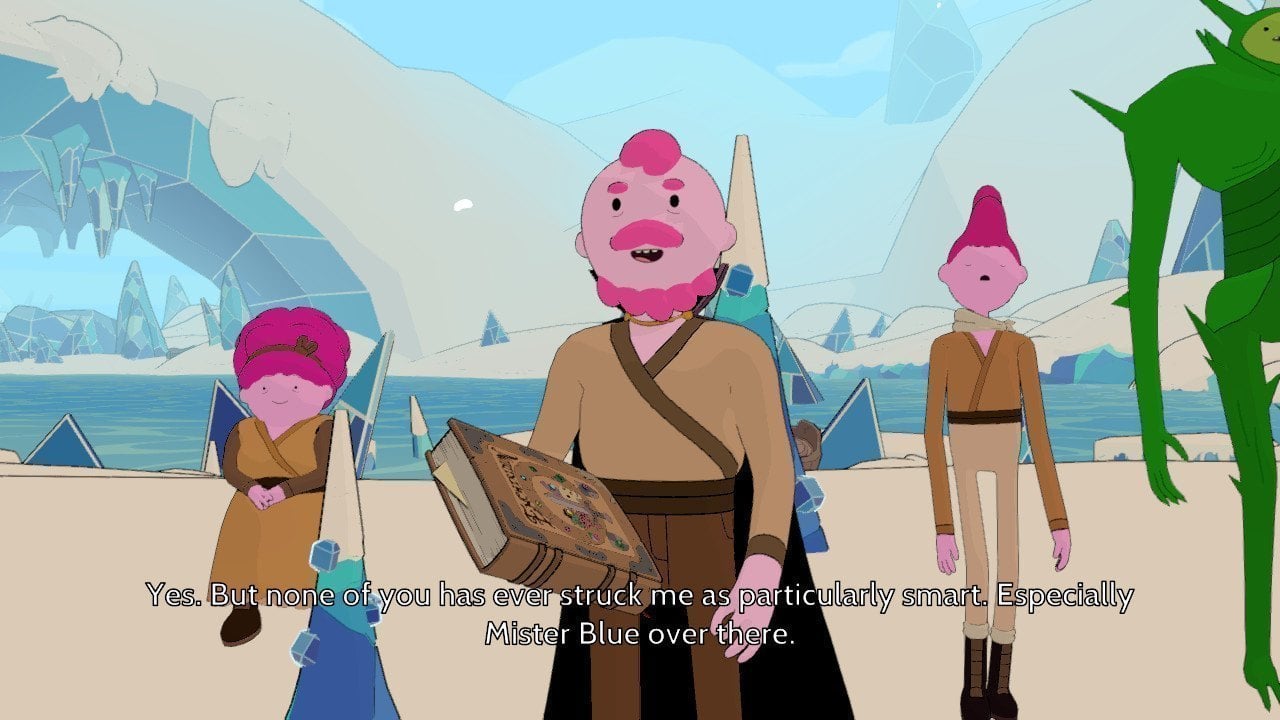 ​
Bugs & Crashes
Despite all my praise, there are a few issues that need to be addressed by the developers. I have had the game softlock three times, and crash twice. This is particularly frustrating, as two of the softlocks were after battles, and the game takes a while to boot back up. I also frequently fell through floors into water or lava, which, whilst initially funny, gets old fast. I don't know if these problems are exclusive to the Switch version, but they're real issues that occur during regular gameplay. Hopefully these will be addressed in a patch, but I'm not holding my breath.