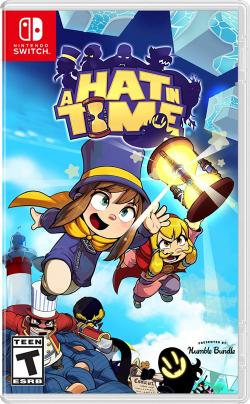 A Hat in Time has finally come to Nintendo Switch, but how does it compare to the Switch's big 3D title, Super Mario Odyssey?

A Hat in Time is a 2017 3D platformer inspired by such classics as Super Mario 64 and Banjo-Kazooie. These Nintendo 64 must-plays are remembered fondly by many, and you can't help but respect the milestones they achieved in gaming. When it comes to modern 3D platformers on Switch, though, only one game comes to mind—Super Mario Odyssey. I personally loved Odyssey, and I'm not even a huge fan of 3D platformers. So how does A Hat in Time stand up?

A Hat in Time begins with the protagonist, Hat Kid, losing all of her time pieces. These magical objects power her ship, making it impossible for her to return home. The obvious solution is to go out and find them, but it's not an easy task. Along the way, you meet many adversaries, such as the Mafia, the Snatcher, and Moustache Girl. Each character is unique and lifelike, giving the game a wonderful atmosphere that 3D Mario titles dare not tread. Unfortunately, the story doesn't capture me like the characters do. That's not too bad, though, right? I mean, just look at the bare bones nature of other 3D platformers. The problem with A Hat in Time is that the characters just beg to be explored more. 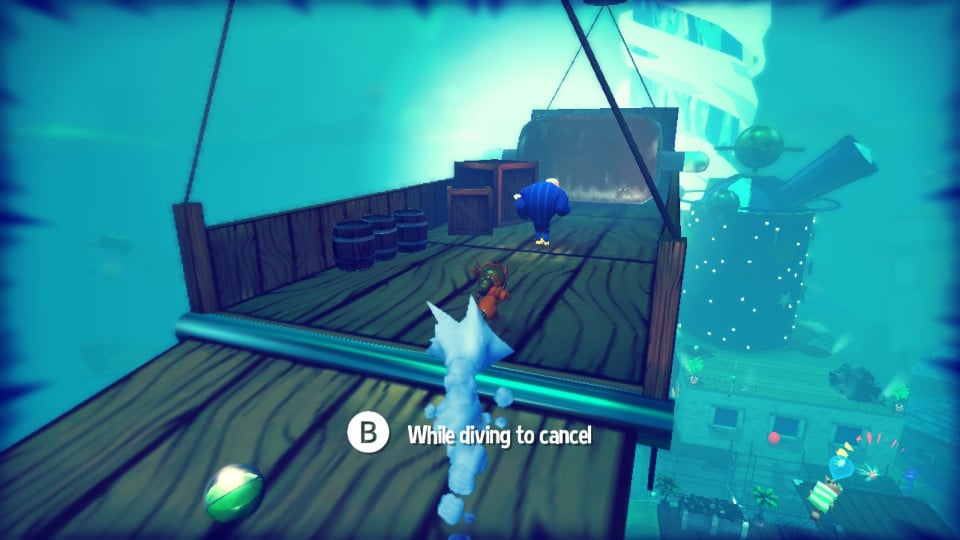 First, I think it's appropriate to compare A Hat in Time to 3D Mario platformers. The basic premise is the same; you travel through different worlds, collecting mystical objects. You generally select a mission, and the world is changed depending on which you choose. Instead of the Power Stars from Mario games, you instead collect 'Time Pieces', which are used to power your ship. After collecting a specific number of these, you unlock new areas and missions, each one providing a fun and unique spin on the world you're playing in. The actual gameplay and movement itself also seems derivative of Mario titles, nailing it with fluent and tight controls, interesting movement options, and ample upgrades. Each world feels perfectly designed to accommodate Hat Kid's abilities, with every jump feeling perfectly crafted. The basic moveset is instantly familiar, even to new players, with a double jump to land more precisely, and a dive to get you that bit further.

The game's title comes from the main gimmick—switching hats. Throughout the game, you gain new hats, which in turn unlock new abilities. These abilities can range from something as simple as sprinting, to more complicated things like stopping time. Using them is as simple as pressing the ZR, and all of them have a place. You can easily switch between them using the R button, something that can be tedious at first, but you soon find yourself accommodated towards. Unlocking new hats is done by collecting yarn scattered throughout each area you visit. Once you get enough wool, you can craft a new hat, assuming you have the correct type of yarn. This offers a well-paced upgrade system, and can allow you to choose which new hats you get first. You can even customise the style and colour of your hats, allowing you to create a cute outfit. 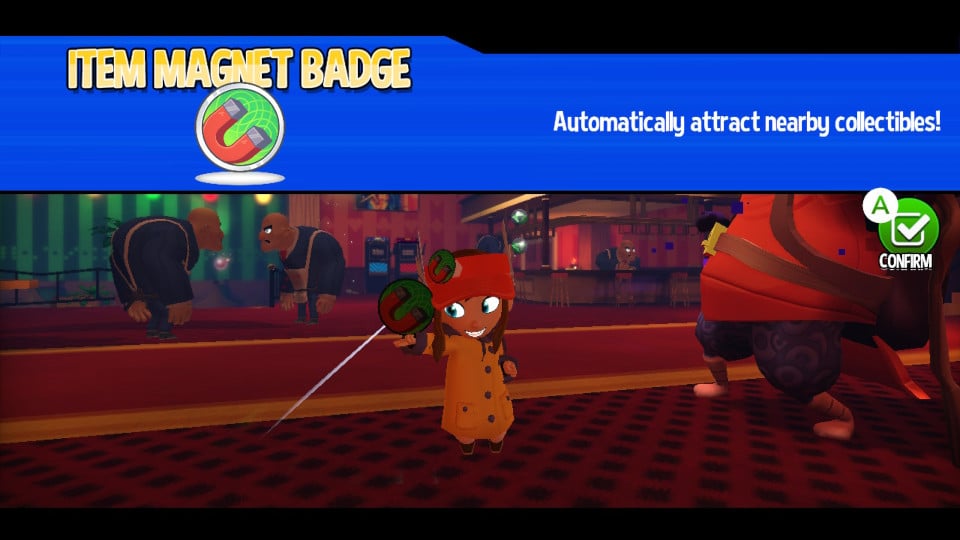 To give Hat Kid even more abilities, you may equip a range of badges you can buy from the Badge Seller. These can unlock new abilities, or just change the general vibe of the game. There's even badges that give you a disadvantage, something hardcore players will enjoy. It's a cool, but inherently flawed concept. You can only unlock a measly three badge slots throughout the game. Think about the old Legend of Zelda games. You had to constantly stop, pause, switch items, and continue playing. It should be a relic of its time, but it's alive and well here. There's enough buttons on the controller to do so much more, so why bother with this archaic system? To make matters worse, there are neat aesthetic badges which force you to give up an ability for the sake of a minor visual change. 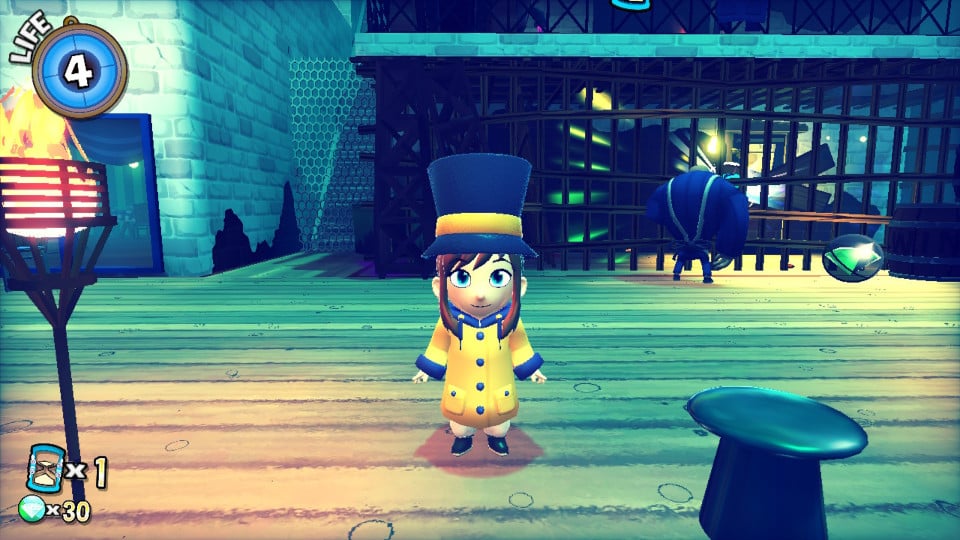 Something that's sure to appeal to Nintendo fans is the wonderful art style. One look at A Hat in Time screams Wind Waker, a style that I personally adore. The world designs are colourful and packed with detail. Everything fits together perfectly, from the goofy and expressive characters, to the music and cartoony sound effects. Unlike Odyssey, a game that experiments wildly with its ambiance, A Hat in Time manages to pull off a more coherent atmosphere. Wacky worlds are great, but there's something special about how well Hat Kid fits into each environment.

I originally played A Hat in Time a few years ago. On PC, it's a wonderful experience, with decent performance and wonderful graphics. Since this is a Switch port, we can't expect the graphics to be extraordinary. For a start, the resolution seems to be drastically lowered, with no anti-aliasing apparent. Decals are disabled, textures are compressed and low-resolution, and, of course, the framerate is an unsteady 30 instead of a smooth 60. I've also encountered a few graphical bugs. It's still fun to play, but with these graphical compromises, you're missing out on a lot. Loading times also suffer, especially on startup. 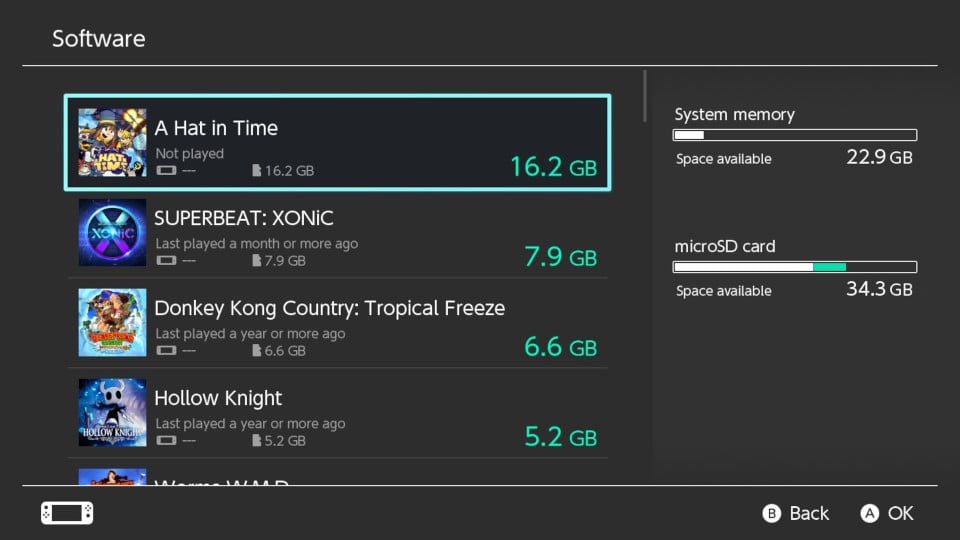 See if you can see the problem in this screenshot. A Hat in Time is over 16GB on the Switch. That sounds ridiculous on its own, but when you look at the other versions of the game, it gets worse. A Hat in Time on Switch is over twice as large as the PC version (7GB), and a whopping four times as large as the PlayStation 4 download (4GB). The Switch is a system with 32GB of internal storage; large file sizes are the enemy. A game that can apparently fit in as small as 4GB should not be 16GB on Switch. It's unacceptable.

I'm not really sure why they didn't include the Seal the Deal DLC in the base game. It was free on PC initially, and including it would have been a small incentive to buy the game. The price is reasonable though, with the 'Switch Tax' seemingly absent. They've even confirmed that Nyakuza Metro will come to the Switch in the future, and that was absolutely worth the price of admission on PC.

Verdict
You, Scott_pilgrim, Stealphie and 7 others like this.
Unlike this review