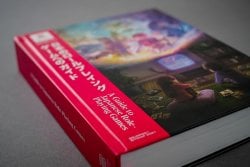 A Guide to Japanese Role-Playing Games from Bitmap Books will soon be available as reprints. Should you add it to your collection?

The RPG genre can easily be considered as the bread and butter of video game genres; and has by now led to the conception of multiple sub-genres. Among the earliest and most iconic are Japanese role-playing games (JRPGs). Used to categorise video game output from Japan like Final Fantasy or Dragon Quest titles, JRPGs have an iconic flair that almost endows them with a genre of their own. But how much do we really know about the sub-genre turned genre, its history and its unsung heroes?

These intricacies around the fantastic world of JRPGs is what the book A Guide to Japanese Role-Playing Games, published by Bitmap Books, covers. Penned by Kurt Kalata and including input from over 30 contributors, this book represents an ambitious project following 30 years of playing and studying Japanese RPGs.

The book begins by laying the ground for what constitutes a JRPG and follows with its origins and history in Japan from 1982 to 2020. This introductory section provides a wealth of information about the underpinnings of the iconic genre that you might not be aware of. It delivers an in-depth, almost academic content, without being off-putting with overly-academic language. It easily draws the reader in and keeps them wanting for more. 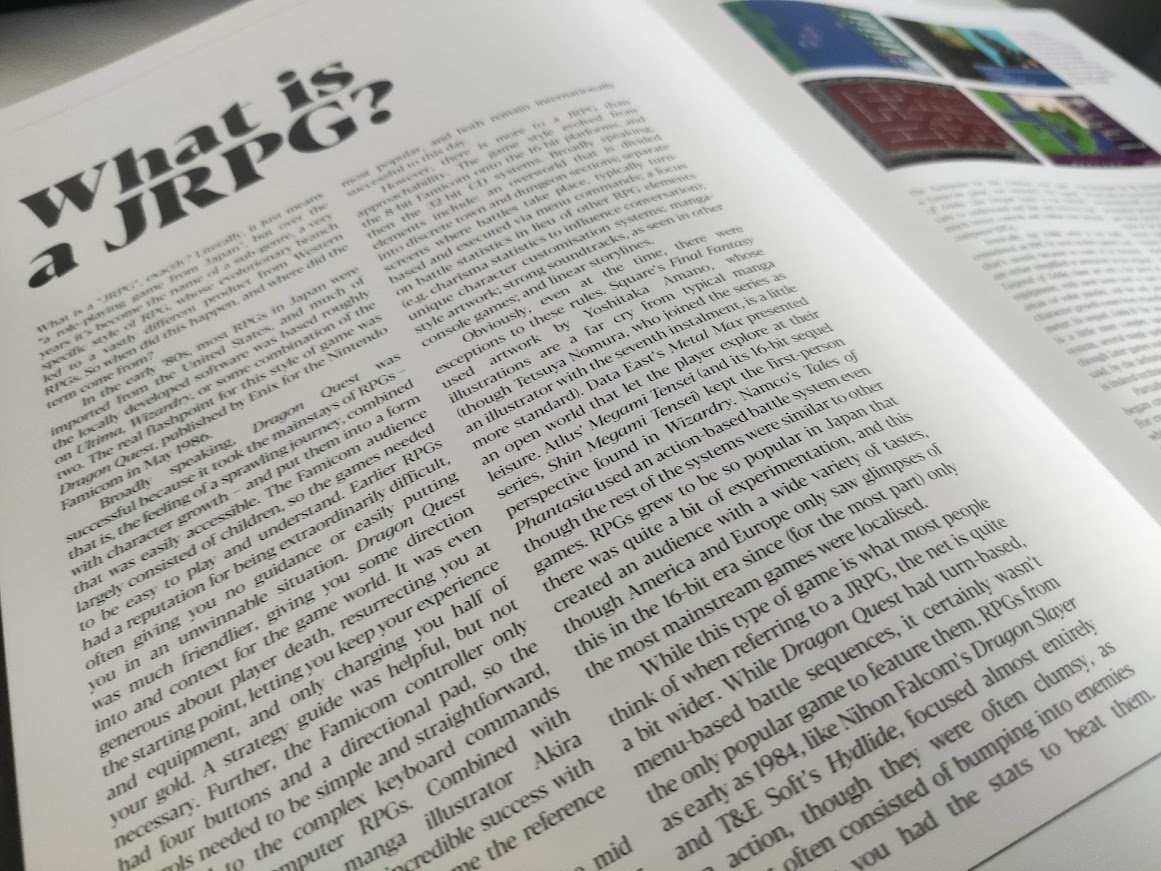 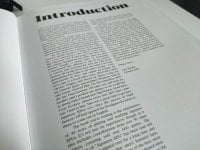 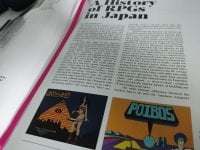 Following the introductory segment, you will find reviews of over 600 games within the vast JRPG ecosystem. You’ll read about entries from beloved franchises like Fire Emblem, to icons of yesteryear like Vagrant Story, to lesser-known titles like Earth Warrior Rayieza (Enix’s first RPG!). They provide an almost encyclopedic volume of JRPG-related information that does justice to the book’s title. Every game reviewed contains in-game screenshots, details about the platform(s) it launched on, its developer as well as the box art. These entries helped me rediscover games that I’ve played, learn about those I only have a passing knowledge of and piqued my interest in titles that I never heard of before. Given the sheer number of games covered, I am certain that my experience will be shared by any other reader.

Of course, given that A Guide to Japanese Role-Playing Games is published in physical media, it can only include so much written content. But what has been included is among the most iconic and interesting, and they certainly make for entertaining reads. 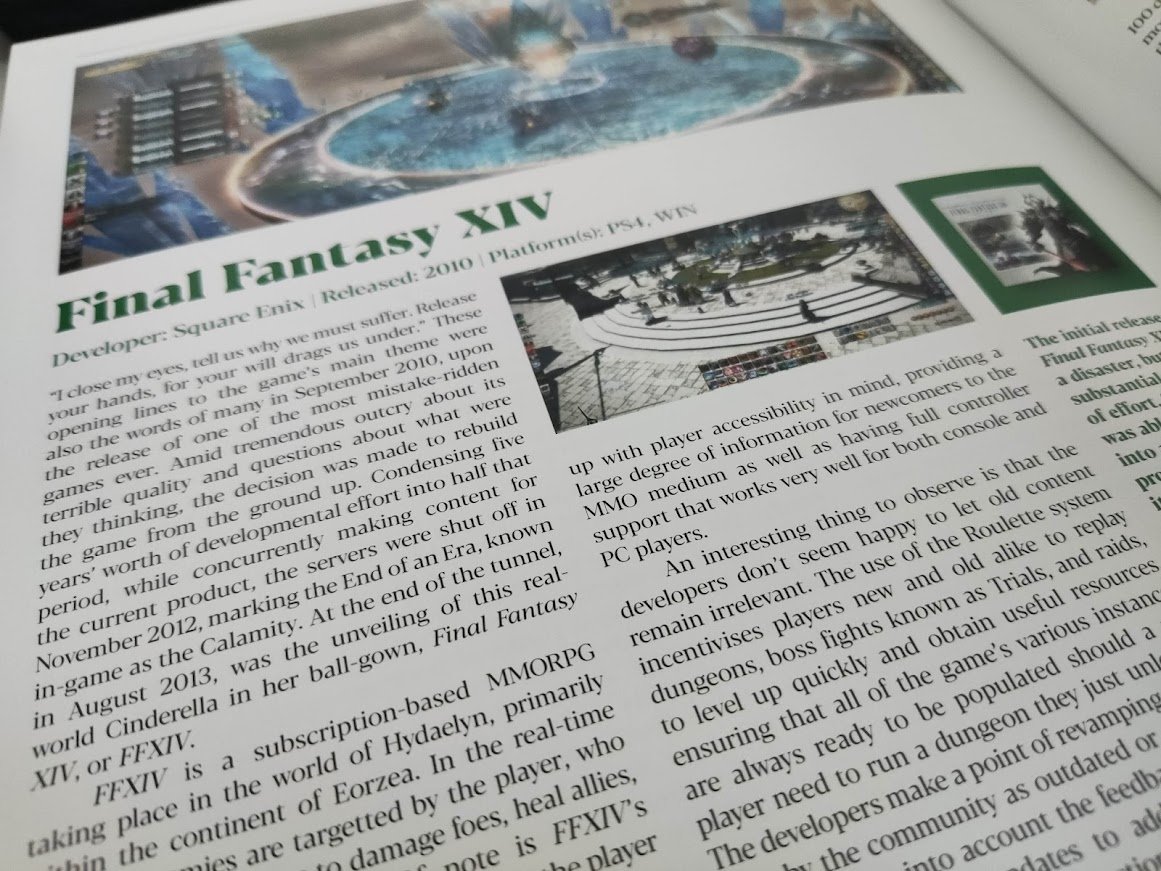 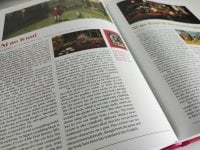 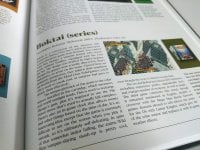 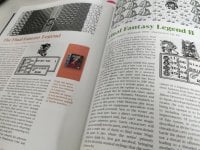 Given its scope, it’s no wonder that A Guide to Japanese Role-Playing Games is Bitmap Books’ largest book to date, coming in at 652 pages in length. And as is customary with the publisher, these 600+ pages are delivered with quality in mind. The book comes in hardcover with thread-sewn binding and printed lithographically on high-quality paper. A handy bookmark ribbon is included to save your in-book progress and as with every Bitmap Book purchase, you get a free PDF version of the book for viewing on the go.

The front and back cover bears an original artwork by Stephanie Sybydlo that inevitably invokes a sense of nostalgia; especially if you’ve spent your childhood forging memories on JRPGs. Exclusive graphics are also included within the book where dividers feature original, retro-inspired overworld maps from designers Army of Trolls. 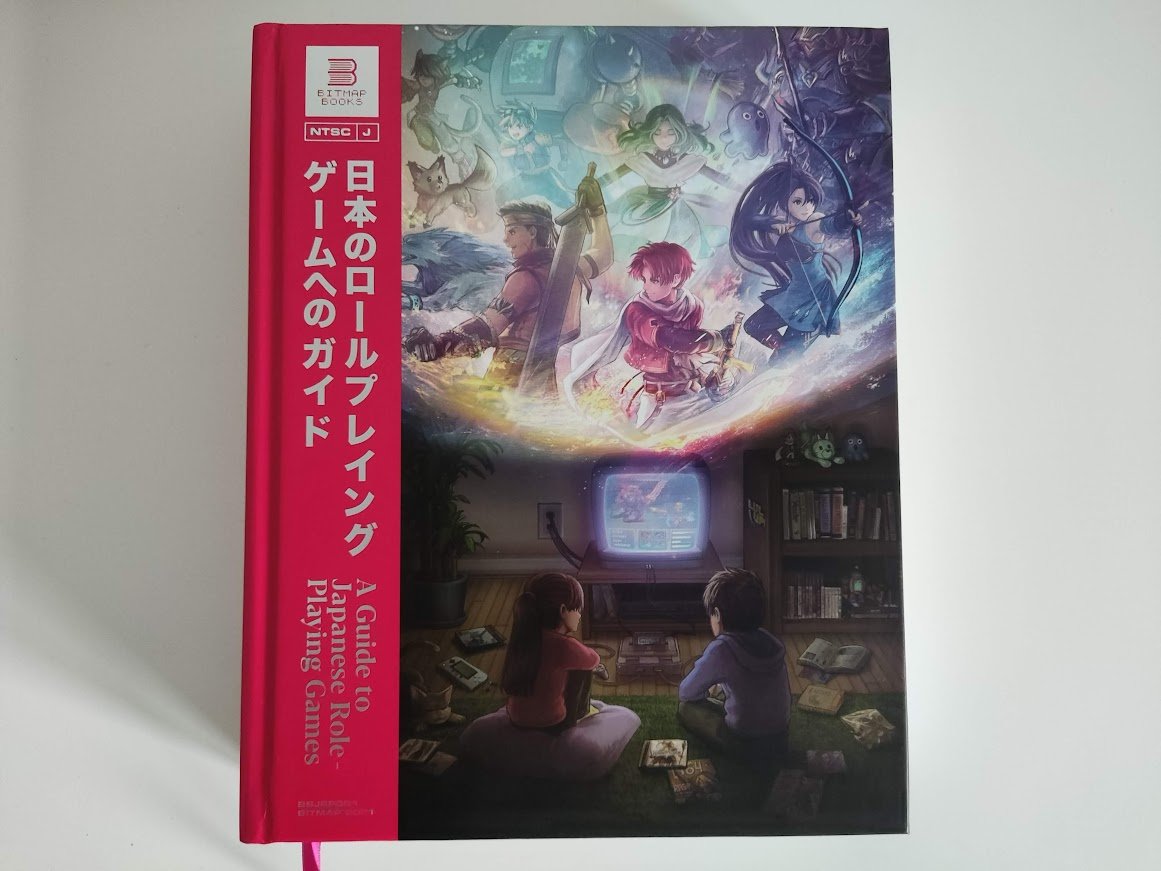 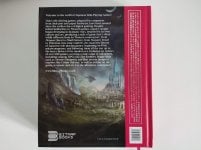 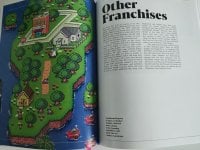 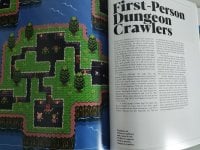 Regarding graphics, I wish that the box arts for each game entry was larger. They are rather small, with some requiring squinting to discern details. Additionally, images of the back of the box and of the game hardware (cartridge, CD, DVD) would feel right at home but are missing. These would not only add to the nostalgia but be helpful for gaming history preservation purposes.

I am also divided over the layout of the entry order which is not alphabetical but based on certain sub-genres, franchises and developers. Browsing through an alphabetical list would make for easier navigation in my opinion but you can always use the Index to find where the title you are looking for is in the book. 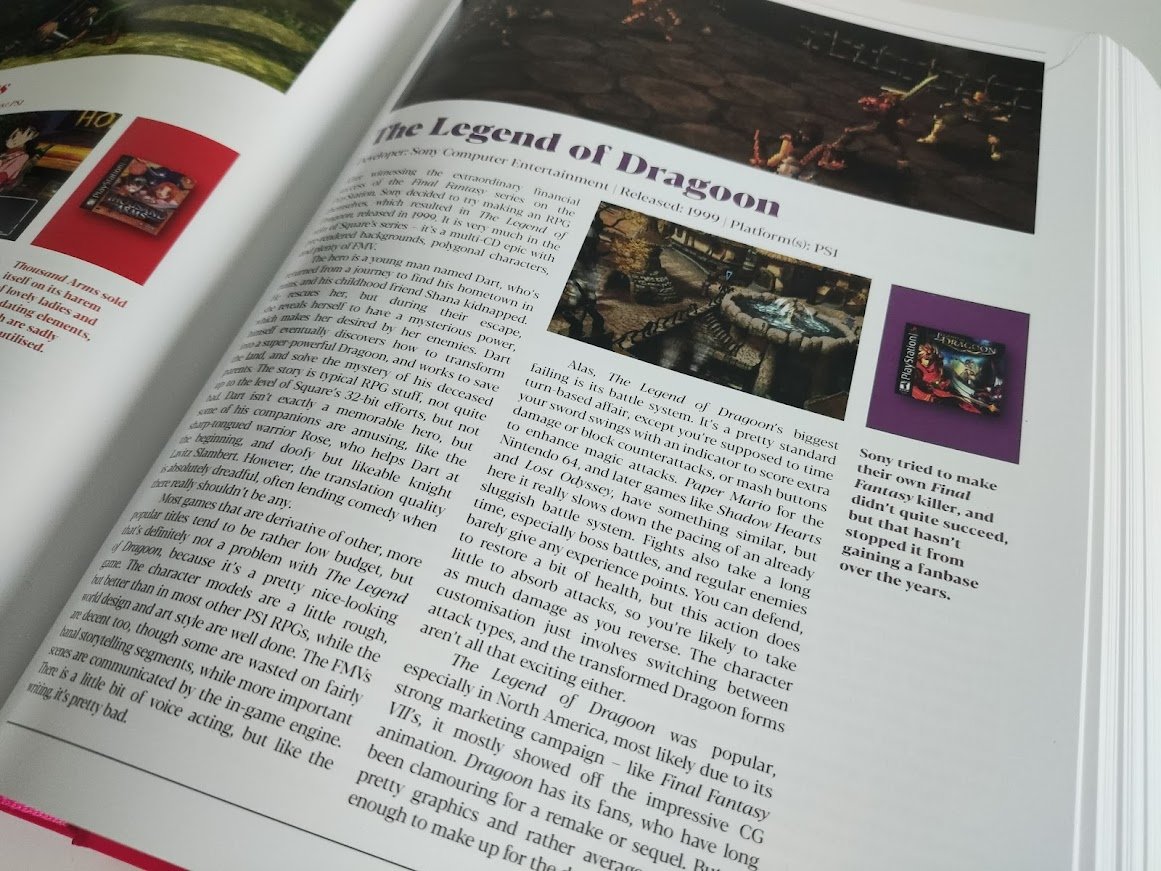 That said, A Guide to Japanese Role-Playing Games will inevitably be a great addition to your bookshelf, should you choose to purchase one. From cover to cover, it will prove to be an entertaining and nostalgic read. Given the effort put in and the quality of the book itself, it is well worth the £35 it sells for on the official Bitmap Books website. 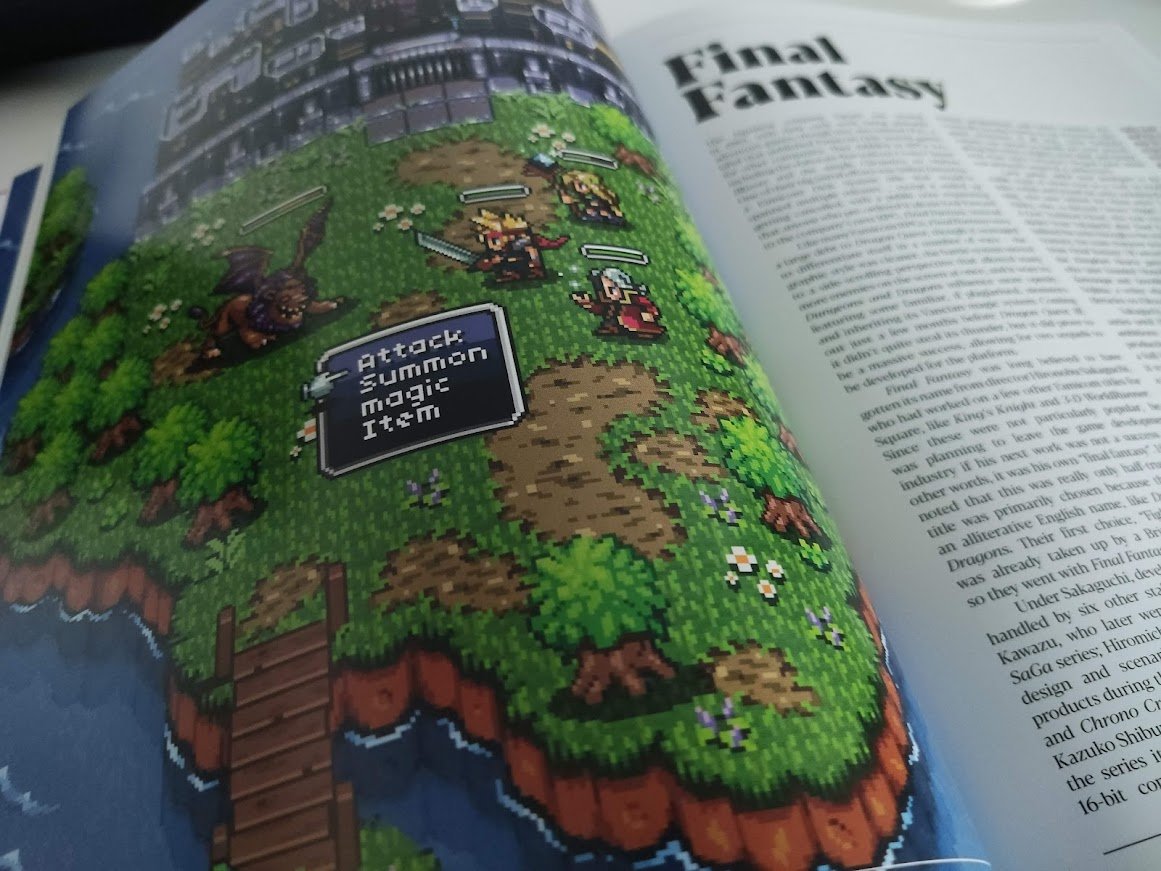 Whether you are a fan of JRPGs, a collector, a video game historian or simply want recommendations for games in the genre, A Guide to Japanese Role-Playing Games will provide a wealth of quasi-encyclopedic information that will entertain this whole spectrum of readers.
Reactions: uzimakiuchiha, Issac, tfocosta and 11 others
Share:
Facebook Twitter Reddit Pinterest Tumblr WhatsApp Email Share Link
A guide to choosing your waifu...
No? Okay...
Reactions: FlorinEmil, ChaoticCinnabon, k7ra and 1 other person
Oh wow thanks for bringing this to my attention. Bought it to read over the christmas holiday
Reactions: Prans
Looks like another great book from Bitmap Books! I think I'll be picking this one up too, just like the last one you reviewed.
Reactions: Prans
Woah this is awesome. A must have for all JRPG fans.
I have this... and it's so beautiful that I can't bring myself to remove it from its shrink wrap.
Reactions: Prans
The Japanese title reads as something a kindergarten graduate would say Oo
One of the few purchases I made over the pandemic. It's a gorgeous book with a lot of really obscure JRPG/RPG progression from the very early days with early computer systems (what even qualifies as a bare-bones JRPG) to modern series like Final Fantasy, Dragon Quest, Shin Megami Tensei, the Tales of Series and so on. It's a really cool book for anyone that's grown up with JRPGs!
Reactions: Prans
I've been eyeing it for a while, since the first release, but it's way too expensive for me atm.
I bought this after seeing the review yesterday. it wad $61, and Amazon only had 3 left, 2 after I bought it. now, there's one from a reseller for over $90.
Reactions: Prans
uh... wow... that's... no words... lol.
Reactions: Jiehfeng
Does not trash Legend of Dragoon as awful? Clearly not worth the paper it is printed on.
Sick cover
Sounds like a guide on the how to enjoy these games but it's not. Too bad.
I don't understand the appeal and I don't think I ever will
I don't really enjoy gaming as much as I used to. It's difficult for me to sit down and really power through games. What I've always really enjoyed are learning about all the various game stories, environments, character/art-design, history and franchises. It's an encyclopedia that vastly simplifies the time it takes for me to learn about JRPG franchises; old, new, obscure, cult-classics (etc). It's a way for me to appreciate gaming without having to spend hundreds or thousands or tens of thousands of hours playing.
Reactions: Prans
I doubt it'd ever happen but I'd like to see a book that talks about the best way to experience games, such as if it's emulateable well, what platform it's best on, what patches you might want for the best experience, etc. That's a longshot though.

This, however, seems like a really fun read. Shame it's so expensive, but it seems pretty worth it!
Reactions: VassagoX
As cool as that book would be, we live in a world of remasters, remakes, and definitive editions these days. It would not be up to date for long. I guess they would have to keep editions going.

Now a website that breaks down versions and editions, that would be awesome.
nice

@ The Real Jdbye: so which one is the mistake? 7 minutes ago
Chat 1