Has 8BitDo finally delivered a long-awaited Sega controller, or will I be disappointed and throw the thing at a wall in a hissy fit?
Today I’m taking a look at the latest from 8BitDo, the M30 Bluetooth controller and Bluetooth Retro Receiver for the Mega Drive/Genesis. Is it the next best thing since someone uttered the words “actually, could you cut that bread into bits for me?” Or is it a cheap imitation to be avoided at all costs?

8BitDo, the company who started out making Bluetooth controllers which were almost exact replicas of Nintendo’s classic N.E.S and S.N.E.S pads, has come a long way. Since those early days the company has released (even more) Nintendo inspired pads along with its own design products encompassing everything from joysticks to speakers.
Recently the company has even teamed up with Analogue, the manufacturers of the Nt and Super Nt consoles. It is perhaps this partnership and Analogues upcoming Mega Sg which has spurred 8BitDo into making their first complete Sega inspired product, the M30. The M30 controller is actually available in two versions, 2.4G and Bluetooth and it is the latter of which I am looking at today.

The 2.4G variant of the M30 which is designed solely for Mega Drive (which I’ll be calling it from here on out, as I’m not an American) use, comes supplied with its own dedicated receiver. Whereas the Bluetooth version requires the purchase of a separate Bluetooth Retro Receiver, should you wish to use it on your Mega Drive. Without a Retro Receiver the Bluetooth M30 can still be used with the Nintendo Switch, Windows, Mac, Android and raspberry Pi systems.

Upon taking the controller out of its box, it may seem a bit light. However this is not a criticism, indeed it’s a compliment. To make such a fully featured controller, with Bluetooth and a long lasting battery. While keeping it as close as possible to the weight of the controller which inspired it, is no mean feat. Don't think that by light weight I mean flimsy either, it's certainly not, the construction is reassuringly solid, with no flex at all if you try twisting it about. 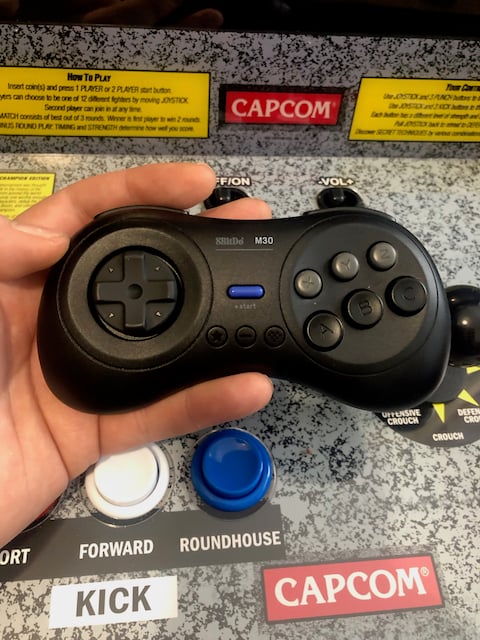 One would, perhaps naturally, assume the M in the M30 would stand for “Mega Drive," the shape of the pad however is somewhat closer to that of the Saturns Model 2 (or launch Japanese) controller. Being more of a, pinched in the middle, rather than boomerang style of the original Mega Drive 6-Button Pad.
The M30 shares the familiar 6 main face button layout as both the Mega Drive and Saturn pads, while adding the two shoulder buttons seen on the Saturn pad. A necessary decision to allow for a full compliment of eight game buttons for Switch compatibility. In addition to these eight buttons are the requisite Start button along with the Home, Screenshot, - and + buttons for compatibility with the Switch. The last physical button on the controller is a Sync button, which is nicely tucked away around back and slightly sunken to avoid any accidental presses. 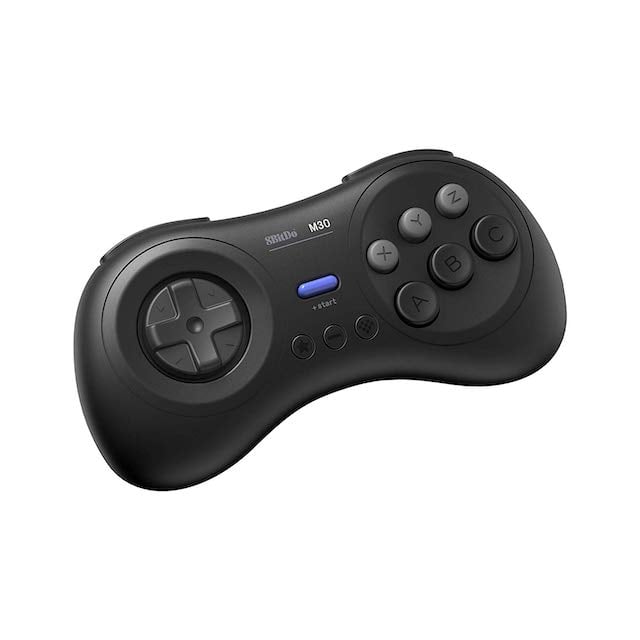 If you do intend to use the M30 with the Nintendo Switch, be prepared for some potential hair pulling and definitely a bit of getting used to the controller. Being styled after the Sega controllers means that by default the button placement is somewhat different to the standard Switch layout. For instance the A, B, X, Y cross layout of the Switch is reversed on the M30. So that A on the M30 equals B on the Switch and so on. The C and Z buttons of the M30 correspond to R and L respectively.

Thankfully, there is a solution, though if you’re not the sort for reading instruction manuals (like me), you may initially miss it — and it needs a firmware update to boot. By holding the combination of Select and D-Pad Down for 5 seconds, the A, B, X and Y buttons will be swapped around and back again. This option is only available in Switch mode.
Also worth learning are the joystick mappers for Switch mode. By default the M30’s D-Pad is mapped to the Left Joystick of the Switch, not the *ahem* Switch D-Pad as you might expect. So to accommodate the other directional inputs of the Switch, 8BitDo have assigned the Select and D-Pad Up, Left or Right (again holding for 5 seconds) to correspond to D-Pad, Left Joystick and Right Joystick of the Switch. It’s a faff, but it works if you really need to mess with it.

To be fair I’d hardly expect anyone to be playing Breath of the Wild with the M30, unless you’re a serious glutton for punishment. For the types of game the M30 is intended for; 2D Platform games, Fighting Games and so on, it’s perfectly fine as is most of the time.

Where this pad, to me at least, makes the most sense is on our beloved retro systems, or an emulator if that’s your thing. Thankfully 8BitDo have taken a page from their own book. Just as they did for the N.E.S and S.N.E.S, they have made a Retro Receiver for the DB9 controller port of the Mega Drive. This opens the system up to not just the M30, but every one of 8BitDo’s other Bluetooth controllers along with PS3, PS4, XB1 and more. 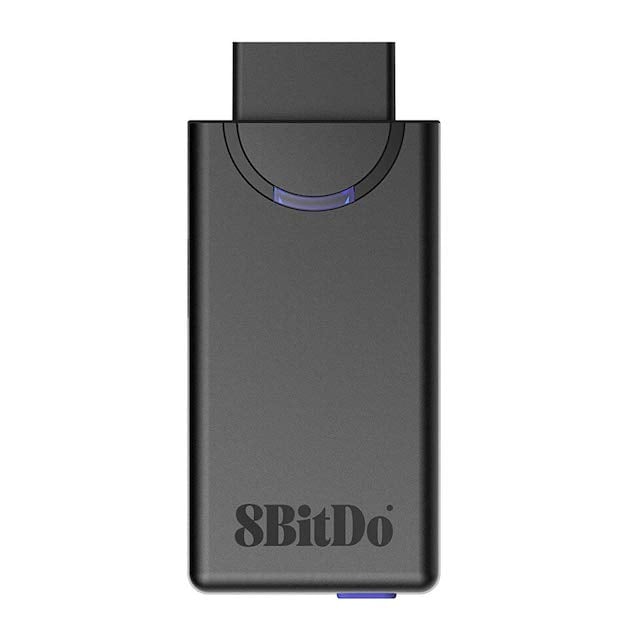 Likewise this means you can use the M30 on any of your other systems outfitted with an 8BitDo Retro Receiver. Incidentally, I have tried the Retro Receiver (and M30) with my Sega Master System and it worked perfectly. Sadly no such luck with my Amiga or any other DB9 using systems I’ve tried yet.

When it comes to modern Sega inspired wireless controllers I can think of only this and the Joyzz available from Krikzz. As much as I like the Joyzz they are quite a bit more expensive and a lot less versatile than the 8BitDo options. The other alternative I can think of, if you don’t mind a bit of easy tinkering, is an 8BitDo DIY kit.This lets you rip out the motherboard of an original Mega Drive 6 button pad and replace it with a Bluetooth enabled motherboard and battery. This is a quick and easy process and will give you the exact feel of the original 6 button Mega Drive pad.

There are less buttons of course, so I wouldn’t necessarily recommend this for the Switch. But for retro systems, paired with a Retro Receiver, or for emulator use, they are great. Not to mention still more versatile and significantly cheaper than the Joyzz.


But Is It Any Good?

The rolling D-Pad of the M30 is very, very close in feel to that of the Mega Drive, which makes it a superb choice for 2D fighters especially. Though it’s just as happy with a shmup or platformer.
The shape of the controller nestles very comfortably into even my huge pit-shovel sized hands. Initially I was a little worried, as the surface of the controller felt a little slippery, though it has proven not to be an issue at all in use, even with dry skin. (I have a cold, so I’m low on fluids it would seem.)

I’ve been playing Street Fighter 2, R-Type, Mario World and many others on the Mega Drive, S.N.E.S, PC and on my SuperGun to put the M30 through its paces and I think it’s a tie as my 2nd favourite 8BitDo controller yet.
I’m somewhat undecided as my N30 Arcade Stick takes top spot. Then it’s a toss up of the great feel of the M30 vs the greater versatility of the SF30 Pro. I think it’s probably the SF30 Pro for Switch use and the M30 (most of) the rest of the time.

The Bluetooth connection has proven to be rock-solid so far and virtually lag-free. The buttons are firm, but not too firm, without any nasty sponginess that we all probably remember from third-party controllers of the past. You know, the ones you always gave to your friends to use, because you’re nice that way. There’s a USB-C port on the back for charging the internal battery and on the front are four LED’s to show the battery charging status, ‘player number' and so on.

All in all I’m mightily impressed with the M30 and the Retro Receiver, not just because I’m a fan of 8BitDo products in general. But because the M30 really is one of the best designed, most comfortable and versatile Bluetooth controllers to have hit the shelves in a while. Throw in the Retro Receiver and you get even more systems to use it on. Unless you absolutely must have the shape of the original Mega Drive controllers without tinkering, which you get with the Joyzz, the 8BitDo M30 is the one to buy.
Verdict 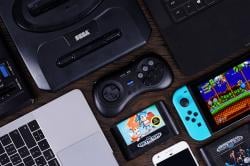