Go to download
Overview History
QUOTEIn my CS class at my university last semester, we learned C by programming for the GBA. For one of my projects, I took the sourcecode from a GBA WinS demo and greatly expanded upon it, firstly to make it much faster, and secondly to add user input so that different visual effects could be generated. I turned it in long ago, but continued to work on it for further improvements. I eventually installed DevKitPRO and ported it to the DS for speed purposes, then made a version that could rotate around the center of the screen with the DS's additional horsepower. Finally, I made a small branch-off program that creates a starfield on the DS screen, with variable speeds. 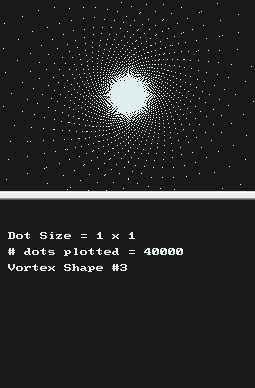