The Legend of Zelda - Time to Triumph (Dingux) 1.0

After the events that occured in Termina and the victory of the hero on his evil alter-ego, Zelda and Link knew that, from the bottom of hell, Ganon the immortal drawed his power from his wish to the Triforce, and rounded up his army with a view to invade Hyrule. Until the day when, after months spent watching out for an attack, an event came up and put an end to this endless waiting...

Move Player -- D-Pad
Run -- Hold A (if you own boots)
Use the sword -- B (if you own a sword)
Great technique -- B to load, release when fully charged (after the tone) to use a spin attack.
Look around -- R + D-Pad (outside dungeons)
Selected Object -- Y (only when the selected object is useable)
Gloves -- A
Display Map -- X (outside or in a dungeon)
See defeated monsters -- L (after finding it)
Teleportation -- R (in a dungeon as Oni Link)
Open a chest/Read/Speak -- B
Select/Confirm/Pass -- Start
Access/Quit the selection item menu - Start
Quit/Save -- Select 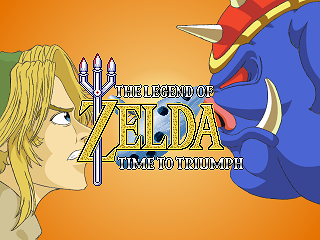