Go to download
Overview History
Concept
-------
Sonic Orbit is a musical toy made for the Nintendo DS console platform. The interface consists of three rotating concentric circles (orbits) made up of sound trigger balls (spheres). As each orbit rotates and the spheres trace a circle, when they pass the 12 o'clock point (was 3 o'clock in last release) of their orbit a sound is triggered. Spheres of the same colour trigger the same sound. In addition, a background track plays along with the triggered sounds, the tempo of which is synced to the speed of the orbits.

Thus music is made! The toy is basically a loop based sample sequencer with an original and intuitive visual representation. The user uses an intuitive touch screen interface to manipulate the spheres therefore manipulating the sounds that are sequenced. 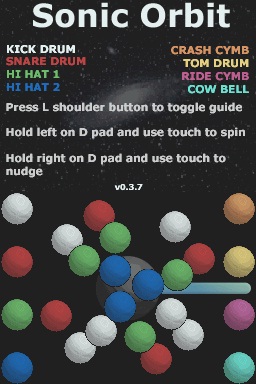