Go to download
Overview History
Finally, we have sound in Laser Hockey! After three months of doing other stuff and one month of working we have uploaded the latest build. The game still needs tremendous polish but with sound in, it's finally starting to feel like a real game. All music and sound effects were created by a member of Moose-At-Play.Build 0.6.0 Enhancements and FixesOriginal streaming music and sound effects for the title screen Original streaming music and sound effects during game play Hooking into Box2D's collision system to play sound effects during game play Randomizing which neon sound gets played on each contact [BUG] Cancel button on Host/Join screens never pops up Removed paddle-neon collision from Box2D using ContactFilter, doing it manually with bounding box to avoid bouncing paddles Moving your paddle into the goal area is no longer allowed by design, graphics to convey this will be added next month Randomizing which wall sound gets played on each contact 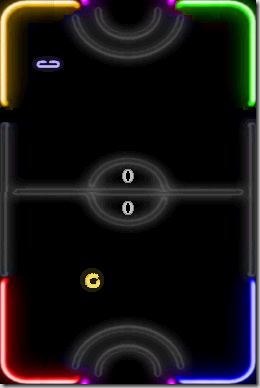