Go to download
Overview History
Dicewars DS is a multiplayer version of a popular Flash based strategy game Dicewars for Nintendo DS handheld console. Your task is to conquer the whole game field by rolling dice. Each turn you may attack any opponent's territory from one of your adjacent territories as long as your territory has more than one die on it. When attacking, If you roll more than the defender, you win. At the end of each turn, the greatest number of adjoining territories you have is calculated, and you are awarded a bonus of that number of dice, which are placed randomly on your territory. In the network game mode you will need at least 2 players to start a game. The player starting up the game will decide the minimum and maximum amount of players. If the players wish to start the game before waiting for maximum amount of players, the rest of the slots will be filled with CPU players. 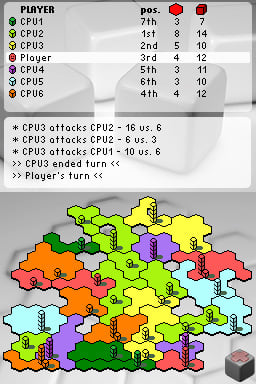 @ Psionic Roshambo: Not that the first one was great lol Today at 1:12 PM
Chat 0