Download
Overview History
NOTE: THE FILE THAT IS REQUIRED FOR THIS TO WORK HAS NOT BEEN PUBLICALLY RELEASED.
gerzytet WISHES THAT WE GET CONFIRMATION FROM JAMES CHAMBERS BEFORE THE CODE IS RELEASED.

I WILL PUBLISH IT SOMETIME THIS WEEK. THANKS FOR YOUR PATIENCE.


In 2018, James Chambers released an exploit that allowed the packing of NES ROMs into GameCube Memory Cards for use in Animal Crossing.
https://jamchamb.net/2018/07/11/animal-crossing-nes-emulator-hacks.html


However, there were a few issues with Python, in which it was made for Python 2, and it didn't quite work. Chambers recommended you use a Virtual Machine as a workaround.

Thanks to gerzytet, we now have a Python 2 port of the project, with a few extras on the way!
--

I created a batch file to somewhat automate the process.
It compresses the ROM using Wiimm's SZS Tools, and gerzytet's Python 3 port of jamchamb's AC NES save packer.


Run the program.
Enter '1' when prompted to run the install scripts. (First run only)

It will produce a GCI file, which you can then use on your preferred platform. 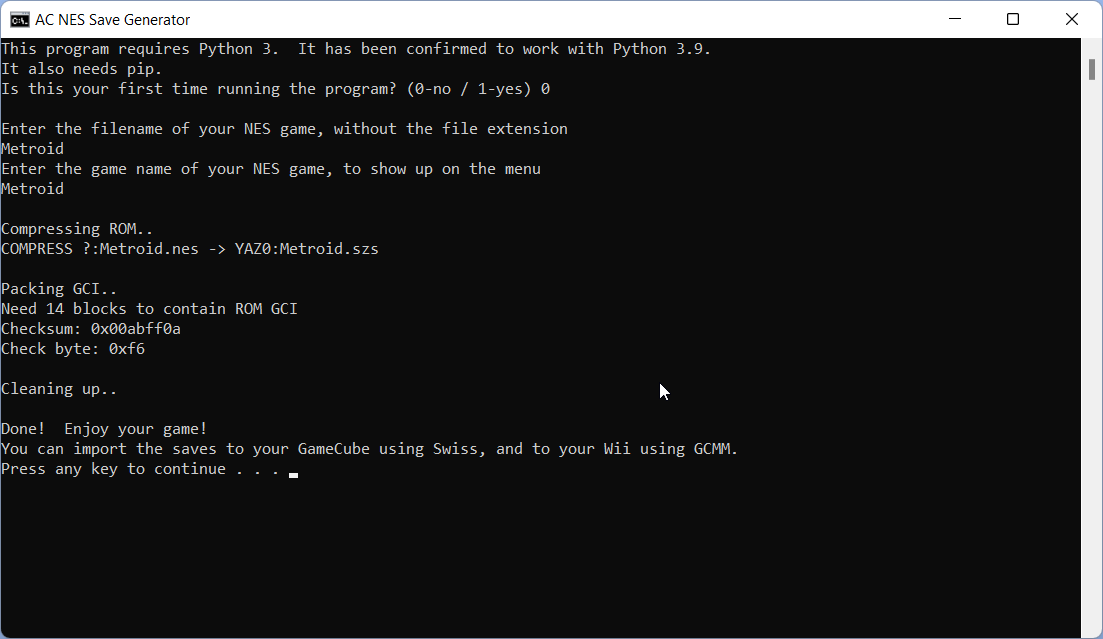 This is just the first version, so hopefully these will get fixed in the future.