Welcome to this blog post, I'll be sure to make more for every new SX update. I guess this'll be a series?
So anyways, SX has made a beta update, 2.2 to be precise, with the main feature being USB drive support, that's the explanation segment.

[Why it's badly implemented]

The USB support works, however it will only install NSP files to your nand, or to your SD. This is particularly annoying because most of the time, USB installation would be used for when you run out of space on your NAND or SD card, but you cannot do that for this.

Stolen code is the part where I talk about whether the code is stolen or not... This shouldn't be necessary, but oh well.
(UPDATE) Apparently this *doesn't* use stolen code. Good for them. I assumed they had used the new LibNX update because that's the TX-y thing to do. Sorry for the issue, and next time I'll try to be more... credible, I guess? I won't make assumptions. Promise!

This is another quickly pushed out update to draw in new customers for their product. It isn't even all that good. I'd give this update a 6/10, since it is does some of the stuff it intended to do.
(I've removed the file because I looked over it and I generally just didn't need it there)

And where exactly is it stolen? I don't think that it conflicts the libnx license in any way (maybe except for including the license in the release - but I don't think that's necessary for binary distribution).
Apart from that xci loading is plenty. All large games are available as xci, it's probably ban safer and not really much more inconvenient (wew, 2 button presses more). Who cares if update files are stored on SD?
@Technicmaster0 I'd assume they had to include the license, but since it is binary distribution you are right? Anyways, I just find it annoying that this uses anything from anyone else. This is now incredibly simple to do with the new libnx update, and that is one of the things that annoyed me, how they're just making new stuff when new libnx updates come out.
All homebrews would have to include the license if it was required for binary distribution.
Of course it would be cooler if they came up with their own stuff
Just a tip: you can do headers like this

Ooo
https://gbatemp.net/help/bb-codes
Honestly, fuck open source licensing... If it's open source for the world to see, then props to them for taking advantage of it. At least someone is making good use of it.
Reactions: 1 person
@Jayro
Sounds like you've never programmed anything or produced anything of your own ever.
@andyhappypants just stop. Thats typical for the Internet. People are doing what they want just because you're more or less anonym. You wouldn't go on the street and just offend random people you don't know for no reason. And you also wouldn't go in a store, grab everything you see and just run away. And the argument "Instead of sciresm bitching why doesnt he pull his finger out and get his own shit released?" is shit. Just because he didn't code an own backup launcher or whatever he isn't allowed to say his opinion? Wtf? I am working hard in order to buy and play video games and i'm 14! If you are 39 and can't afford paying for the things you enjoy you should really ask yourself what you did wrong in your life. And again: stop offending random people. You are 39. With that age you should know how to behave.
Reactions: 1 person 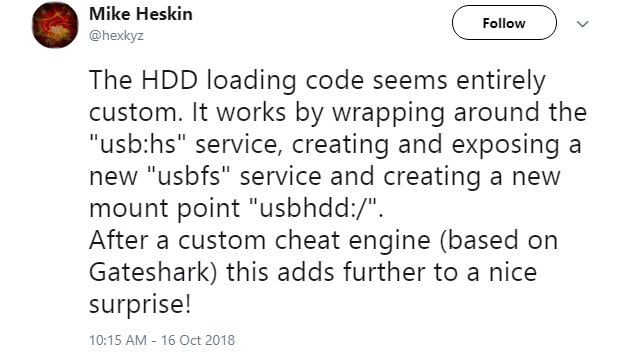 Kisses to all the haters, get some cheese to your whine.
Reactions: 1 person
This must be painfull for OP, ROFL
Reactions: 1 person
Eh. I don't care about the NSP part, that's obviously stolen, but XCI loading from USB Drives is really cool, in my opinion.
Do you even know how to read properly?

SciresM said:
Latest libnx-master (and so next stable release when it comes out) now supports USB communication with PC on all firmwares
Click to expand...


The HDD loading code seems entirely custom. It works by wrapping around the "usb:hs" service, creating and exposing a new "usbfs" service and creating a new mount point "usbhdd:/".
After a custom cheat engine (based on Gateshark) this adds further to a nice surprise!

Thanks for playing.
Reactions: 1 person
Eh, not like I'm not going to keep the series going. I'll just edit the OP, they did actually pretty well for this one. Good on them.
TX is just as bad as Gateway. In the end, free open source original work always wins.
Reactions: 2 people
@dpad_5678 That's also true, but for once they didn't steal something.

The HDD loading code seems entirely custom. It works by wrapping around the "usb:hs" service, creating and exposing a new "usbfs" service and creating a new mount point "usbhdd:/".
After a custom cheat engine (based on Gateshark) this adds further to a nice surprise!

Creatable said:
I've also attached a file made by a friend of mine that sums it up perfectly.
Click to expand...

It also doesn't help that you are referencing Essoteric here.
Both you and him fucked up by jumping the gun and claimed v2.2 used stolen code (and for the record, the cheat engine is not stolen either). but I guess whining is more important.

You don't even know how to whine properly, at least learn how to do it in a believable way lol.
I don't even know why hating TX is still a thing... some people can't accept the situation and carry on.
Reactions: 1 person
@dpad_5678
Gateway is TX. It's been hinted at multiple times by credible sources, like Hexkyz and naehrwert.
The story goes like this:
The old TX sells all of their assets to an investor, most likely being GaryOPA, who is also allegedly the guy who made Gateway.
The new TX owned by the investor starts doing SX which is heard to be commissioned work by credible developers / a bunch of stolen code.
SX also contains a lot of callbacks to Gateway in it as well.
Brick code, the Gameboy rom (this same ROM was used in Gateway!), and the MIPS vm used for the obfuscation.

@ godreborn: there is a deformity in which a man can have two penises, but I forgot the name of it. it was a... A moment ago
Chat 3