After a little Internet Search i found inofrtmations about the Chip and also the latest Firmware Version 1.8.

Switched on the first Time it boots (after the Health and Safety Screen) into the Wii System Menu.Nothing unusual.
Then the frist "Difference" to my other Wii´s - I put the Firmware Tool DVD into the Drive and...

The Disc Channel turns into an .....GameCube Symbol.After clicking on the Channel Symbol it goes to a Black Screen and after a few Seconds the Firmware Tool appears:

It asks me to Update to Firmware,i confirmed it and not it is on the latest Version 1.8.
It seems,the Chip works and all is fine.
And as you can see,the Drive Reading Speeds are unlocked from 3x to 6x
The next Point to check was the Wii´s System Version.As I said it is a PAL Modell and on Version 4.1E

Before I made the Update,I checked of an existend Softmod,because on the System Channel Screen appeared the Homebrew Channel (v.1.1.2) and the USBLoader GX.Both Applications started when I choosed them.
But the USBloader Gx has issues on the Startup/Initialization.

Also was no PRIILOADER installed but as I plugged my SD Card into,BootMii installed on boot2 appears on the next Re-Start.Very nice.
The next Step,as our GBAtemp´s Backup Reminder @KleinesSinchen always suggests: MAKE A NAND Backup ! And.......done in the next Moment.

With this Assurance now I made the System Update to Version 4.3E.

Re-Installed the Homebrew Channel and BootMii as boot2
Installed the latest Version of the Priiloader v0.8.3 BETA (now with Wii Button Support,it works great by the Way,many Thanks to @DacoTaco.)
Also updated the needed cIOSEs for the USBLoader GX which is now working properly.

First I tried many GameCube Backups (PAL and NTSC).Unfortunately I forget (spoiled by the Emulated Save Option from Nintendont) they need now a Memory Card to Save.Needless to say.....none available.
The Games works all fine and without any Issues.

Now the real interesting Part - the Wii Games.
First I tried a few PAL Backups - and there comes the first Challenge,the UPDATE Option from the Game(s).

But I leave it for the Moment because now I tried the NTSC Backups.
A big Disappointment for that Moment.....

The Drive did not recognized not a single NTSC Game.
A little perplexed too....maybe a PAL only Drive Chip ?

Booted again the Firmware Tool Disc - it clearly says on its C64 like UI: Region Patcher: ON
And also GameCube Games from PAL and NTSC worked before.

But maybe Priiloader can help.
Enabled the Hack "Region Free Everything"

That maybe could be a Video Mode Issue...I thought it in this Moment and it should be right...for the Moment.
I remembered a Tool named ARC ModMii Edition (ARCME) from @XFlak which he "disgorged" for Test Purpose.

With that I changed the Console´s Video Mode to NTSC and....
Finally ALL NTSC Games Booted.

With this Success I will close for today,my Friends.

nice but , you learn something new everyday. but what is a d2pro Drive Chip?

what its purpose?
Reactions: 2 people
You have big brain. I would have never figured it out.
Reactions: 3 people
@Flame

Thank you for your Answer and your Interest.It is also "new" for me and I a mstill "learning" about the Chip.

This little Thing is a little "old" from the first Quartal 2008 if I had researched correct.Please correct me if I am wrong.

A little Information about this Thing:

This D2Pro modchip has quickly proven itself as being one of the best and most stable chips for the Wii. This updated version is compatible with the new D2C2 chipset and and requies an easy 9-wire installation. Don't panic if you have an older version, this chip installs with just 5-wires for those of you with a DMS, D2A, or D2B chipset, making the D2Pro one of the easiest modchips to install.

The D2Pro modchip and solderless clip comes pre-soldered and configured for your version of Wii. Perfect for those who want the latest and extemely popular D2Pro modchip and want to eliminate any soldering or the possibility of damage to your Wii. Modchip and clip come presoldered, just snap it in place, if you choose that option.

For those of you who don’t already know, a new model Wii console has been found in the market since March 08 that until now were un-modable, that is until this latest D2Pro D2C2 version was released. The great news for people that have just bought their Wii or already own a D2C2 chipset is that the latest D2Pro will support your D2C2 Wii as well as all other Wii models on the market, one chip for all consoles. So it’s safe to say that if you bought your Wii since April that you will have one of these new D2C2 consoles and the D2Pro is a 100% working solution for these new consoles.

This item is also the perfect option for those customers who have never soldered before because we have gone ahead and soldered the D2Pro chip on to the solder-less clip for you, so you don’t have to solder a single wire when buying this product, all you will need to do is disassemble the Wii console and fit the chip over the DVD controller IC and your ready to go. This is for sure the most simple and damage free way to modify your Wii. You will not have to buy a soldering iron and also not run the risk of damaging your Wii when using this product.
Click to expand...

I hope this is a little "Clearing" now.
Thank you.
Reactions: BaamAlex and StrayGuitarist
@PineappleGod

If this is for me,thank you.
I was very exciting,when I found this Thing last week on an Buyer Platform in Austria.
It makes really fun,becasue it is something new for me.
Reactions: BaamAlex, PineappleGod and banjo2
Neat. I always find old Wii modding stuff to be really interesting, especially old modchips. Nowadays, when people think of Wii modding, softmods are usually the most prominent thing to come to mind, and modchips seem out of place. Very neat that you got it working!
Reactions: 1 person
Thank you for your Answer and your kind Words.
It is a little difficult to get some Modchips for the Wii today and also for an resonable Price.I have "learned" from the GameCube - if you get the Chance for an chipped Console - take it please.

Thank you.
Reactions: BaamAlex and StrayGuitarist
This modchip is so awesome – more than a simple “bypass copy protection check”-thing. And I think it is still pretty expensive if you buy it new. Very good deal getting a Wii in original package with it preinstalled.

Running backup DVDs with 6x is one thing softmods do not allow. As previously discussed in PM: Backup-DVDs serve no real purpose anymore and USB-loading is the way to go normally… but nevertheless: This thing is great!

I know they are a bit more expensive, but please try some 8.5G DVD+R DL (are there even DVD-R DL??). What I like to know:

Have fun with it and I wish the laser in that console a long life!


=========
I'm living a frugal life for the most part and rarely have a "want to have this!!" feeling. But I tell you once again: LittleSinchen is jealous!
Reactions: 2 people
Thank you @KleinesSinchen

And as if it wanted to be like this "felt" one of my "rare" original Games from somewhere right in my Hands and guess...YES it is Super Smash Bros. Brawl PAL for the Wii. 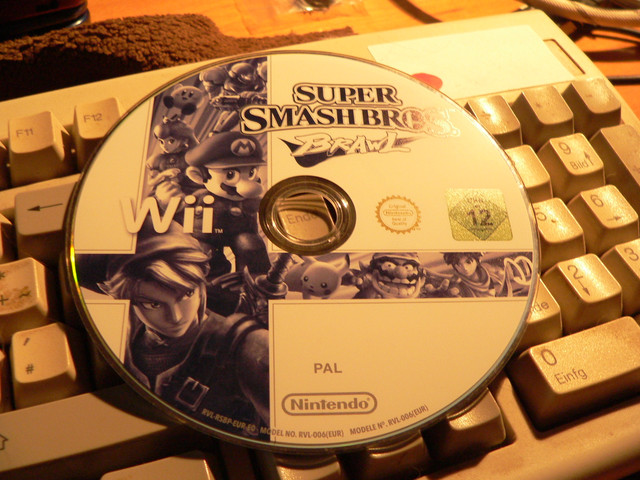 I will do as you wish.And give you a Report.
Thank you.

P.S. I will have more to tell in my next Story,did you remember ?

First I tried a few PAL Backups - and there comes the first Challenge,the UPDATE Option from the Game(s).

Reactions: BaamAlex and KleinesSinchen
wow cool, i wonder if i could at least once play a Wii console ...
im now still saving for my 3ds and 2ds ... hoping find good price, so at least i can continue playing my gen 6 collection again
Reactions: 2 people

@ matpower: And it is well supported, that's why it is still hyped 4 minutes ago
Chat 3