I feel kinda weird for bringing GBATemp into a facebook rant.

Leave a rating
So, I made a tweet saying how much I hate facebook. I said that I prefer GBATemp as a social media platform over it. Is that a bad thing? 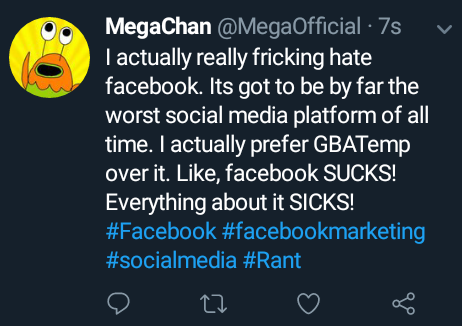 Yesn't
#pleasestop
Reactions: 1 person
This isn't even a social media site, it's forum. what's your next rant how neopets is a superior online shopping experience to amazon?
Reactions: 4 people
GBAtemp is my facebook, not kidding. Most people browse Facebook, Twitter or Instagram when they're bored, I browse GBAtemp.
Reactions: 6 people
thats called entertainment for yourself, not social media. your just slightly aware how gay and pretentious it is. Twitter, dumbest shit ever, human society didnt need it, gives a platform for the dumbest people to praise and like or rant and hate on nothing really. instagram, for the visually easily entertained, and facebook, to unite everyone to make it easier to find the divisions between us.
Reactions: 1 person
whatchu mean? Neopets is superior to everything. That was the Shit
Reactions: 2 people
Forums are an early form of social media. And GBAtemp even has blogs and "tweets". How is it not social media?
Reactions: 3 people
The only problem with it is Facebook itself, not GBAtemp which came first and is actually legit better.
Reactions: 1 person
Gbatemp isn't social media lol....
ok
@The Real Jdbye
Same tbh
People actually think forums somehow aren't social media? Especially ones like this that provide pretty much all the same features as other social media platforms? What? You converse with people, share content, make friends. It's social media by definition.
Reactions: 2 people
Yeaaahh. This is basically the peak of social media platforms, to me
Reactions: 1 person
You talk to people, it's a social media.

Honestly, I think Gbatemp is a good social media site, but not the best I've been on. I'm in an online Medium Size For hacking hardware, and there's 0 Drama, any bickering is really not that big, and it only goes on for a couple replies before it's shut down. There was one big fight going on between two "Pioneers" of the scene, and the way it ended was really cool, because they both apologized, and both stayed instead of bitching about it somewhere else. it's kind of like GBAtemp but instead of spoon feeding the answers(no offense to anyone here btw, just is what it is..) The Rules are pretty much read the guides and search for your answer before posting. (and if you don't decide to read after multiple warnings ur banned)
To define forums, in the standard use case anyway*, as social media seems almost like retroactively defining things as such. The mere act of conversing seems a bit too broad as well. To that end I would expect some push back there.

*I have seen forums with one user act as a blog before... the internet is a strange place.

I don't know what litmus test I would use to define social media but I would be surprised if the end result excluding a traditional forum like this, even if it has a few of the trappings.

Things like the general aversion to real names (not vital by any means, and what I said about retroactively doing things above would come into play here as it is only the last few years that places started having a thing for real names, but I will note it in this), it not being a general purpose platform for a variety of fields (linkedin is nominally for business professionals but that does mean all fields really) and instead games and the hacking thereof, it does not aspire to be a communications platform for the masses or a broad subset thereof, monetisation consists mostly of general style adverts and user donations, said finances are mostly about sustaining and organic growth by means of site directed content production...
People just don't want to admit that forums are social media because they predate social media and people like to think they're immune to that kind of thing.
Reactions: 4 people
@The Real Jdbye Yeah I suppose I've never considered forums to be the same as social media mostly because of the anonymity. Social media to me feels like an everlasting extension of high school, where forums feel like a proper part of the internet.
Reactions: 2 people
Facebook is basically user generated forums and blog posts.
Reactions: 1 person
@Xzi I mean sure, but even on places like twitter I am Anon, I think I've actually shared more info on here then I have on other social media sites
Reactions: 3 people
@DeoNaught On gbatemp you're as anonymous as you want to be. Most social media platforms actively attack attempts to remain anonymous in any meaningful sense. Of course, gbatemp does to some extent to avoid abuse. The other major difference is that twitter and facebook--at least--lock out most content unless you're signed in. This obviously varies by forum, but there's an odd dichotomy of being a very public forum--on the scale of most the adult population of a country--and yet being a walled garden.
Reactions: 2 people