Getting along with solarpower

Blog entry Gallery
Leave a rating
I have posted about my solar power experiment before and wanting to power a Wii and GameCube with it, not using an inverter or the original AC adapter. Also posted a few things about using a portable power station that can be charged with solar and that I used it to make coffee.

To distract myself from the loss of my cats I started upgrading the solar panel and electrical wiring and put in a bigger battery bank! Went from two 7Ah Sealed Lead Acid to four 8Ah LiFePO4 batteries! Both set's were connected in parallel for a 12V nominal system. My latest upgrade was last month when I put all my liFePO4 batteries together into ONE BIG Battery... It took me nearly four days to rebuild it into this: 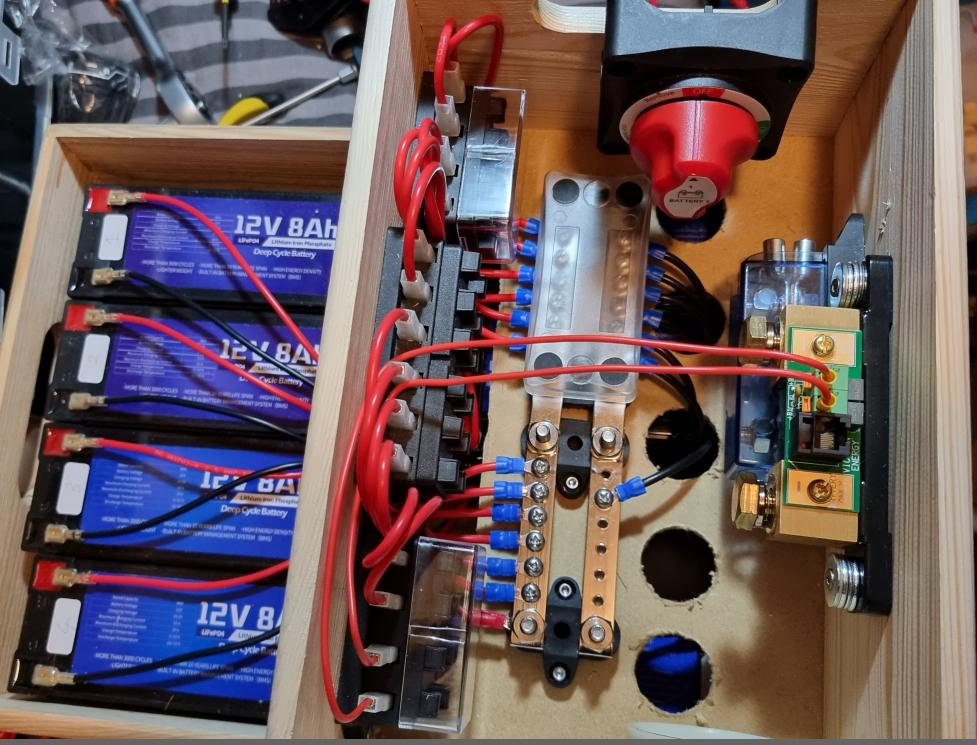 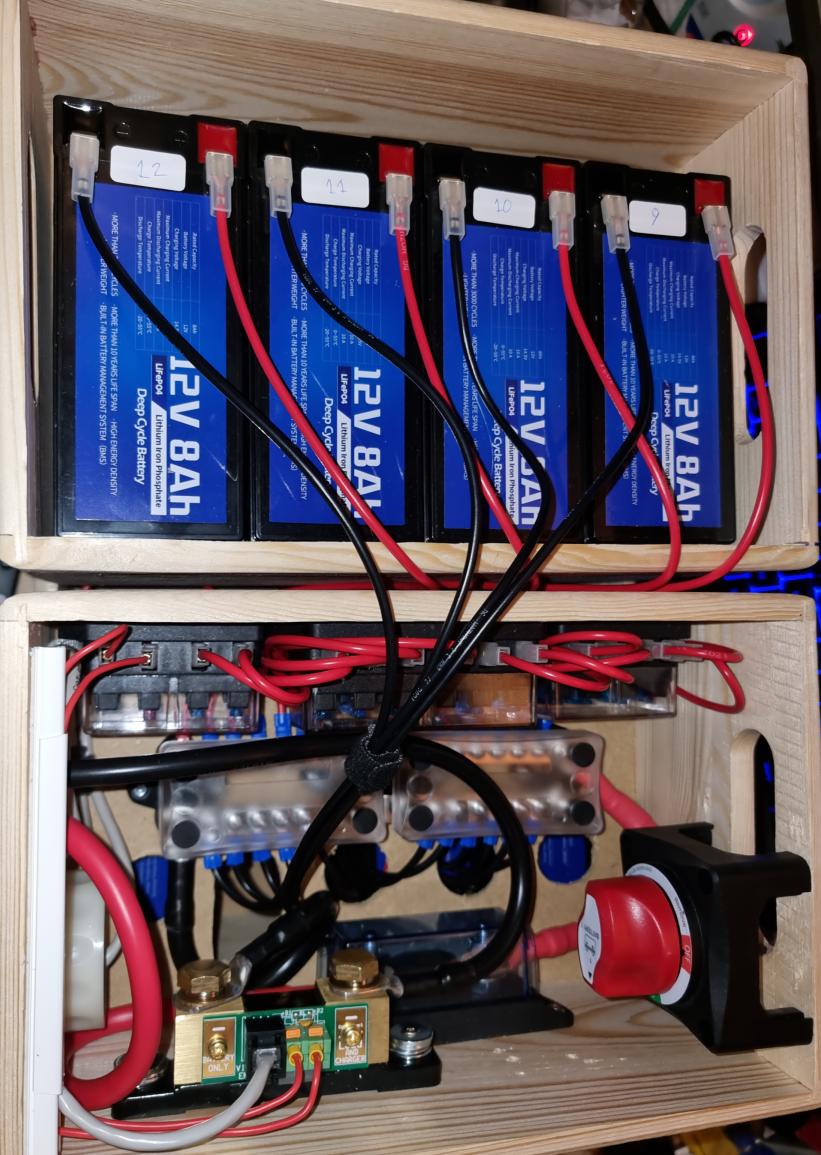 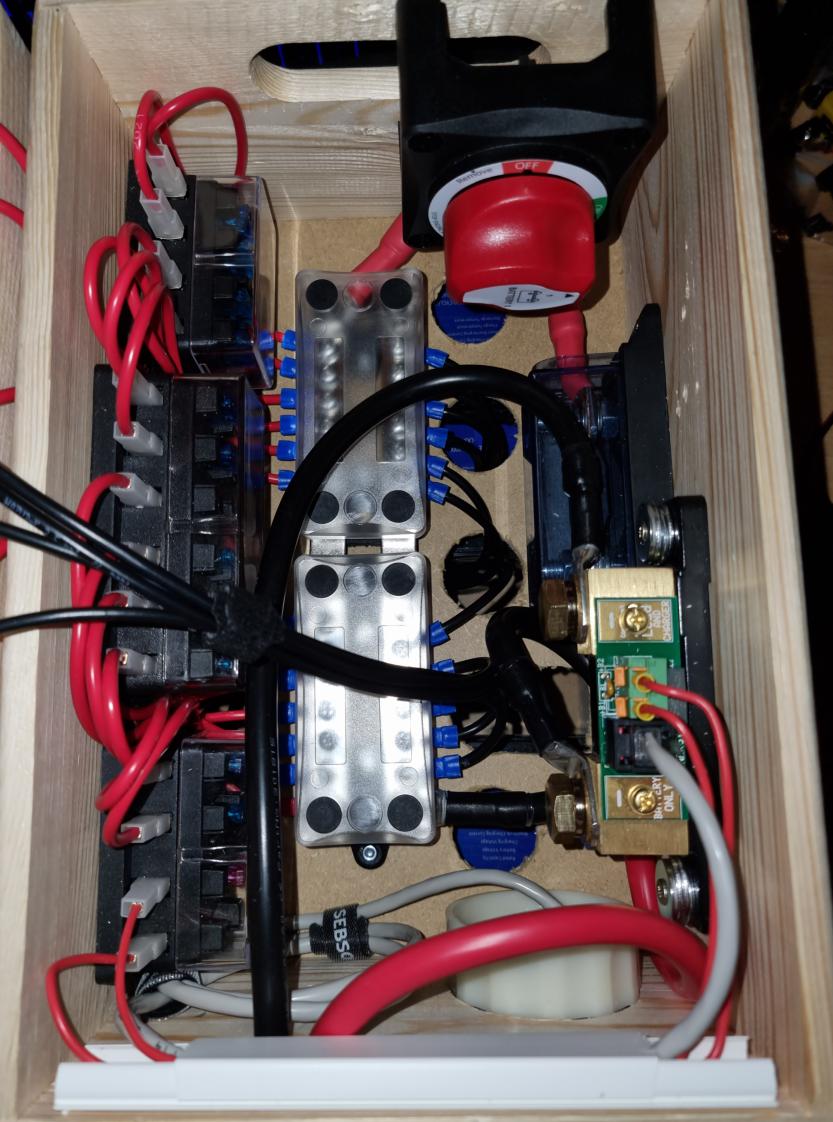 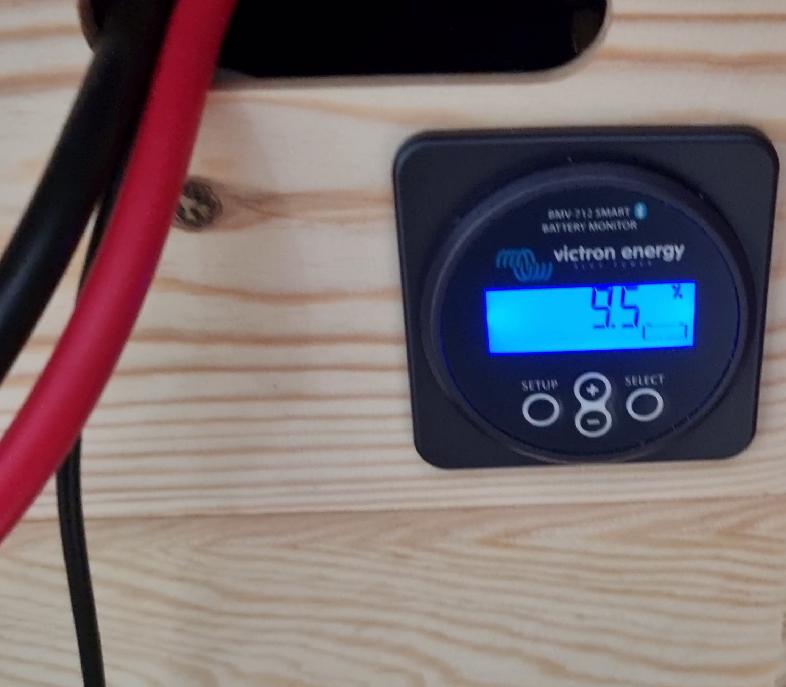 These are 11 x 12V 8Ah LiFePO4 batteries in parallel to make an 88Ah battery bank! I did had 12 originally but one of them did not want to charge up to the same voltage as the other ones. Every wire selected for the expected current and cut to the required length. Each battery has it's own 15A fuse and after combining them and the main disconnect switch there is one big 80A fuse to protect everything. That last picture is the Batterymonitor and the low state of charge was a planned test to see if the alarms were working and how low I could go. It took me nearly 16 hours to recharge with both a wall charger AND solar on a not so sunny day. If there were no clouds it could be recharged in full in about 4 hours from solar alone, and my wall charger is only 5A and I needed to recharge 80Ah, hahahah

You might be wondering what I can actually use this battery for. For the most part I now charge my phone's, tablet's and laptops exclusively from solar power! And I have been experimenting with bigger devices using a 220V inverter to power my big 49" 4K smart tv. To my surprise this does not use nearly as much power as I thought! Even with all kinds of losses in DC-DC converters and the DC-AC inverter with my TV on youtube, netflix or prime video it's only using 60-70 watts. Giving me about 15 hours if the battery is charged to 100% which is more than enough for me at night.
Without using the TV though I use about 20% of this battery...and usually it gets to 100% the next day from just solar power. If I do use the TV it's more like 60% of usage and I try only doing that if the weather forecast predicts lot's of sun hours to recharge. I did try using my PS4 on the inverter but my current setup does not like it that much...and it triggers an alarm and cuts the power off!........that's what you get for connecting things in different way's than they are supposed to.

(it's bad practice so not even going to explain it...)

And here is a screenshot of the collected historical data: 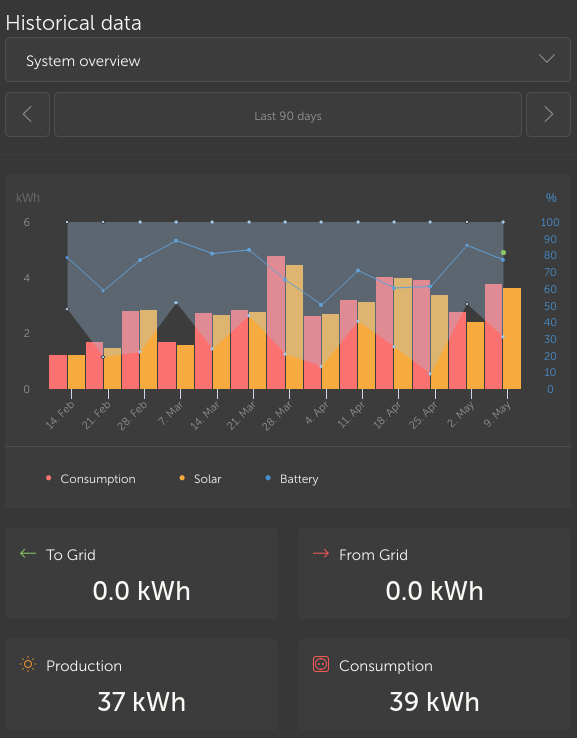 This shows I have produced 37kWh over the last 90 days which means at current high energy prices in the Netherlands that saved me 25 euro's so far. It's not a lot yet...but it's a start! If I take the numbers from the last 30 days and expand that over a year thats nearly 120 euro's! I wish the numbers were higher but my battery and number of solar panels is just not big enough for that! yet! But saving money is not my biggest motivation for having solar panels....it's an obsessive interest in the electrical side and learning about that.
My very fist solar powered battery system could not even power a raspberry pi for more than 18 hours! And that was from 100% down to 0%! Which is very bad for SLA batteries....50% is recommended. So I would say I have improved it a lot already to be more useful and can even power my TV from it now or recharge my power tool batteries. And I have not been doing this for that long...only about 8 months I think.

I wonder if a projector is more energy efficient? But then you would have spend money to buy one which eats into you savings!
Reactions: Archerite

newo said:
I wonder if a projector is more energy efficient? But then you would have spend money to buy one which eats into you savings!
Click to expand...

From what I could find in a few minutes of searching and average projector uses about 250 watts (or more)! The biggest reason for that is because the light source requires a lot of power to be bright enough. So no...that would not be more energy efficient actually.

I beleive my TV uses just 40-50 watts on the 220V side but there are a lot of losses in converting the lower battery voltage up to that. And since I am using multiple converters and an inverter I have about 25-30% extra loss in the conversion. Since my setup is experimental and I do not rely on solar power alone I do not care that much about it right now.

It actually helps me draining the batteries so I can see how much power I am getting from my solar panels the next day. Because at some point al my mobile devices and USB power banks are all fully charged...and if the solar battery is also fully charge the yield drops to a minimum! With the bigger battery I don't have this problem as much anymore compared to when I had smaller ones.
Reactions: newo
Nice experiment. I keep meaning to get into such things but get lazy and nobody seems to be chucking out UPS systems any more (passed up dozens in the early 2000s but today barely see any) and all the inverters I see are square wave.

Some of the solar cooker tubes also look really good.

FAST6191 said:
Nice experiment. I keep meaning to get into such things but get lazy and nobody seems to be chucking out UPS systems any more (passed up dozens in the early 2000s but today barely see any) and all the inverters I see are square wave.
Click to expand...

Thanks. Depending on what you are actually looking for (and your budget) there are multiple options that include pure sine wave inverters. I have all my computer and network gear hooked up to a UPS just in case the power goes out. It does not happen a lot here luckily but it already happened 2-3 times after I got the UPS's....and I was glad to have them at that moment! But they do not have pure sine wave inverters though.

I do have a portable power station now from EcoFlow which is basically a portable UPS, or powerbank on steroids depending how you look at it. They have multiple models but I got one of the cheaper ones, the EcoFlow River, and it comes with a 270Wh battery by default. There is a battery extension kit that I just got a few days ago...turning it into the EcoFlow Max which doubles it's capacity! I have tested my TV + PS4 on it and run it like that for at least 4 hours...maybe a little more. That's 120-140 watts that the PS4 was using with just Disney+ running....not even a game! Better watch Disney+ on the FireTV since that uses less than 5 watts